At the fashionable al fresco fete, sister founders Lizzie Means Duplantis and Sarah Means told The Hollywood Reporter  that it was natural for them to support a cause close to their hearts — especially given that Duplantis’ husband, Seth, previously served as the interim CFO for CHLA.

“Being a parent, too, he was really moved by and really motivated by [their needs], like more beds, better pay for nurses,” says Duplantis in her slight Texas twang, presumably softened by a decade in the Big Apple. Means added that “when you look at the statistics, the bell curve of patients that it serves is amazing: Some of the most fortunate and some of the least fortunate socioeconomically.”

Born from the sisters’ longtime tradition of gifting each other personalized boots, Miron Crosby gives classic western steppers a fashion-forward kick, with limited-run women’s and men’s styles ranging from $875 to $3,850 and kids footwear priced from $50 to $185. “Our cousins own the factory [Rios of Mercedes, which is 160 years old] in South Texas,” says Duplantis. “They always allowed us to play with custom colors and fabrications and designs that they wouldn’t do for other people, so Sarah and I cultivated a very chic collection of cowboy boots for all of the milestones in our lives.”

Statement makers include the midi Jeri boot boasting avocados, chilis and limes (complete with the family’s beloved margarita recipe sewn into the liner); the kitschy-cool Dana boots emblazoned with the cowgirl call “Yee Haw”; and the caramel and champagne Margretta tall boot featuring jumping stars (Gigi Hadid stomped around in the Texas sky-inspired style during a New York photo shoot for Vogue; the design has since sold out).

The two-year-old brand is also known for its bespoke offerings, which take up to six months to make: Grammy-winning artist Kacey Musgraves reached out to Miron Crosby on Instagram for her own personalized pair, and 2 Broke Girls’ Beth Behrs and Mad Men’s Michael Gladis had their matching boots monogrammed for their rustic ranch wedding last July. Gwen Stefani owns the short Jess booties with studding on the back, while Jessica Alba and Hilary Swank are also fans of the brand’s chic western footwear.

At Thursday’s party, the stylish siblings — fifth-generation cattle ranchers who grew up in West Texas, not far from Marfa — sported the evening’s signature paint-splattered Shorty boots customized by Erin Feniger Maggio of Rialto Jean Project, a fellow CHLA supporter whom they tapped to personally paint-splatter one-of-a-kind boots for guests at the soiree. 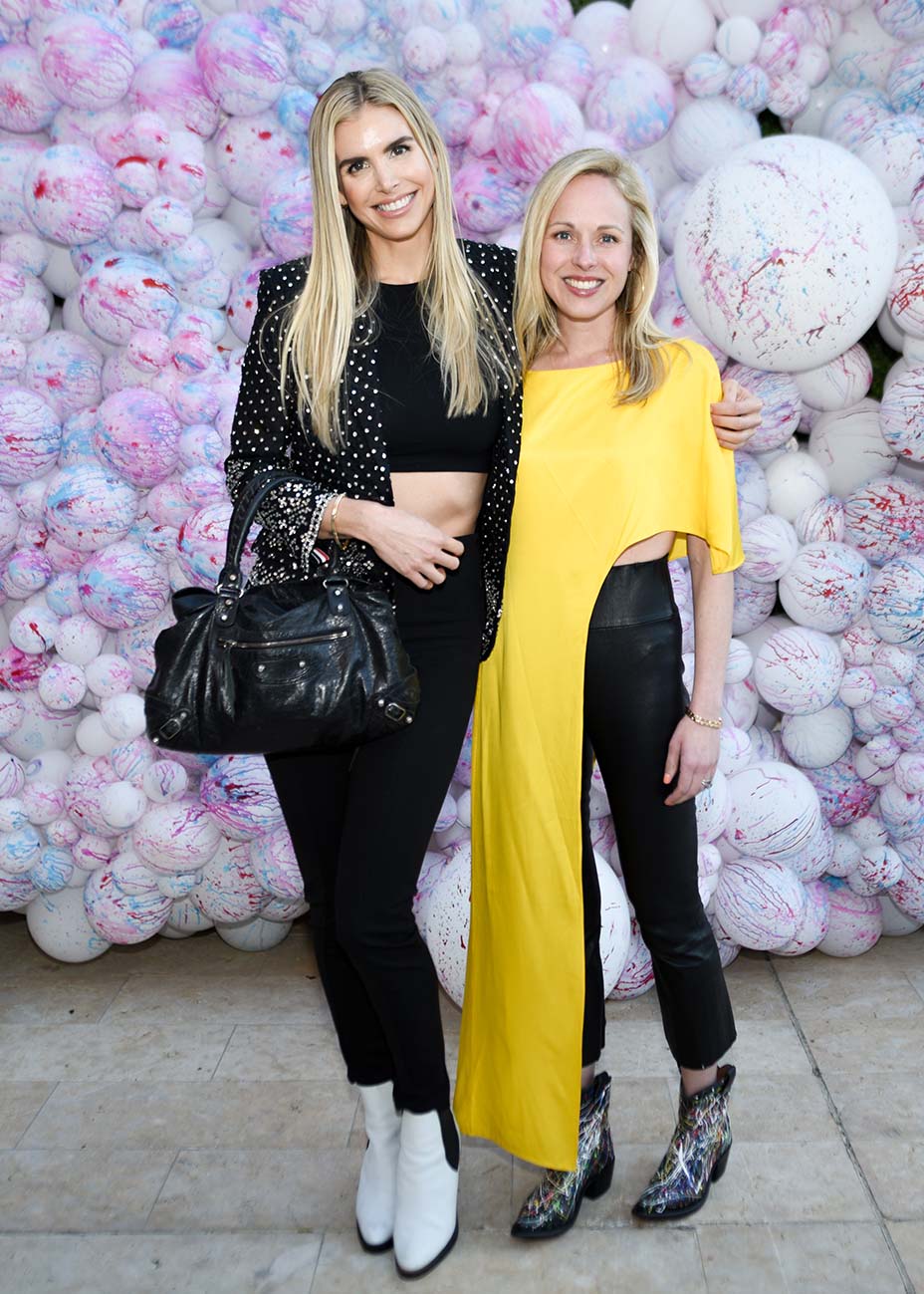 Partygoers such as Jaime King (who even joined in on the art action) and a mix of fashion industry insiders watched as Maggio splattered pastel and neon paints on the brand’s best-selling, ankle-grazing silhouettes in creme and black, which were shoppable on the spot for $1,000 (100 percent of the proceeds go to CHLA). The Miron Crosby x Rialto Jean Project Splattered with Love Shorty boot in both colors is also available on the brand’s website and at the Miron Crosby boutique in Dallas.

The duo’s road from ranching to outfitting stars included a stint in New York, where Duplantis and Means moved after graduating from Texas Christian University to build their careers in finance and fashion, respectively. “I was at Goldman [Sachs] in my boots and it was very natural for me to wear them,” recalls Duplantis. Means, who was previously in sales at fashion label Loeffler Randall, says the sisters knew they were onto something when New Yorkers from all walks of life wanted their own colorful boots. “I’m talking like older men, fabulous gay men, younger cool fashion girls and finance people. There was truly a void in the market and that resonated with us. We just didn’t have anywhere to send people that we felt was kind of up to par” with the quality of their family’s factory, says Means.

A growing family for Duplantis and law school for Means brought the sisters back home, which in turn inspired them to revisit their idea to start Miron Crosby, which is named after their great-grandfather and completely handmade in Texas. (The brand’s design team is located in New York.)

Next, Miron Crosby will debut an exclusive style at Capitol, the buzzy Charlotte, N.C.-based, multi-brand designer boutique helmed by Laura Vinroot Poole that opened just this week with fine jeweler Irene Newirth at the Brentwood Country Mart in Santa Monica. The brand is also opening a separate Miron Crosby pop-up shop at Brentwood Country Mart in June, marking its first stand-alone space beyond its flagship at the historic upscale shopping destination Highland Park Village in Dallas.