Critics have recommended seeing Mission: Impossible — Fallout on Imax screens with good reason: The Tom Cruise action film at times resembles a gorgeous travelogue, with postcard-perfect views of Paris, London and Kashmir — or so we’re led to think.

The climax of Ethan Hunt’s (Cruise) latest adventure takes place in a mountain range in Kashmir, a region that borders Pakistan, India and China, but that’s where script and reality deviate. While Kashmir’s geographic importance is integral to the storyline, director Christopher McQuarrie subbed in two visually stunning locations to create the heart-stopping chase scene late in the film: Cruise & Co. careen through the lush green mountains of New Zealand in specially outfitted helicopters until, via the magic of film editing, Cruise and co-star Henry Cavill are deposited atop Preikestolen, or Pulpit Rock, in southwestern Norway. 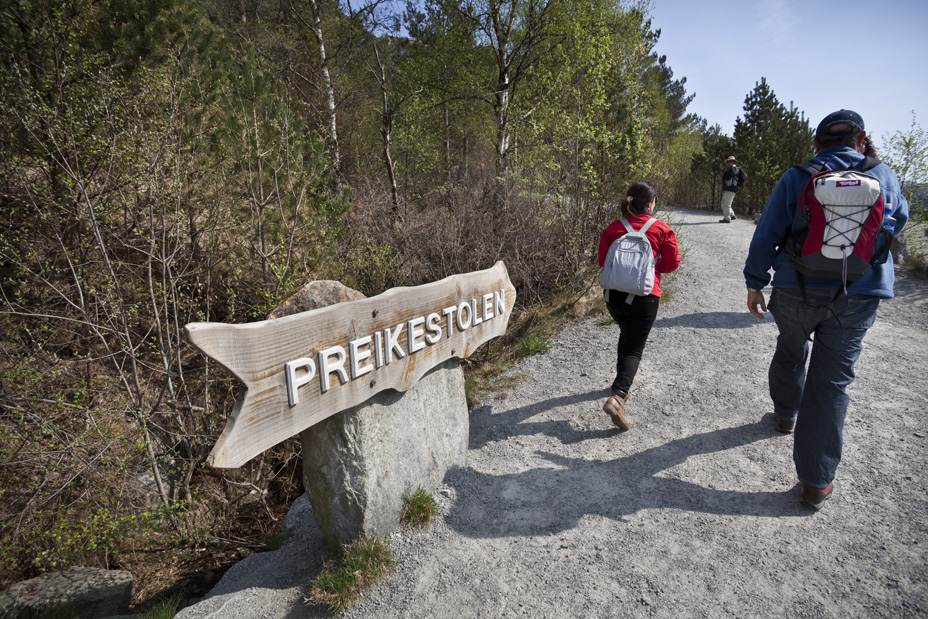 One of Norway’s most popular tourist attractions, Pulpit Rock takes its name from its stark shape, which resembles a pulpit when viewed from the waters of the Lysefjord below. Reaching a height of 1,982 feet, Pulpit Rock is topped by a plateau that measures roughly 82 by 82 feet, and it’s here — and just over the edge — that Cruise and Cavill battle while surrounded by some pretty spectacular scenery.

“That kind of exposure you can’t buy,” says Beate Gran, digital media manager and a U.S. spokesperson for Visit Norway, the country’s tourism board. The Mission: Impossible production closed down Pulpit Rock for filming “for a solid 10 to 14 days” last fall, Gran notes, so Visit Norway execs considered how to take advantage of the free publicity, and on Thursday released a short film that plays off Pulpit Rock’s use as the location while also highlighting Norway’s other areas and attributes. 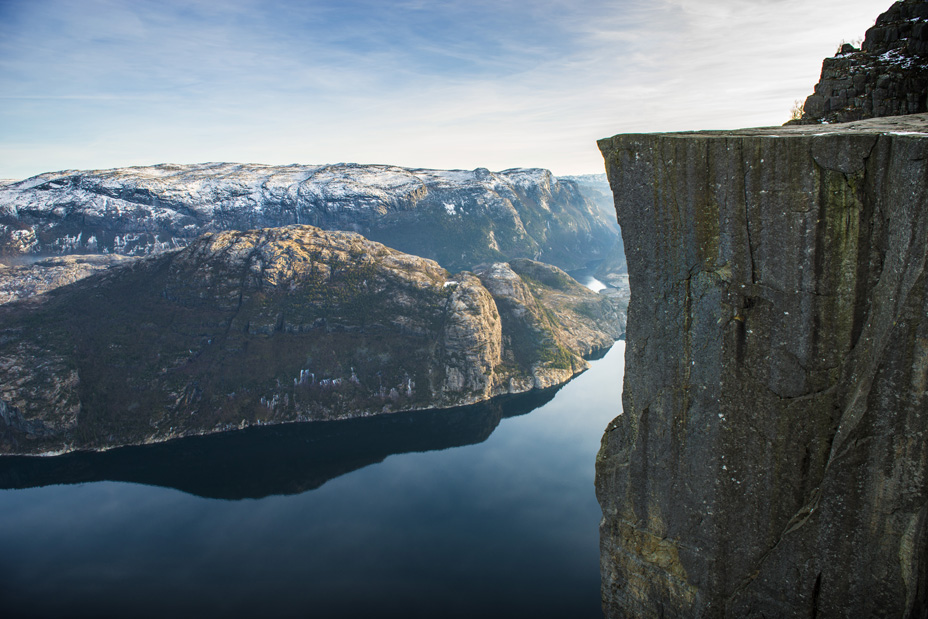 If viewing Fallout causes your wanderlust to kick in, here’s everything you need to know to see Pulpit Rock in person.

It’s not impossible to get there: Flights into Stavanger, the Norwegian city closest to Pulpit Rock, are frequent, but this is a regional airport; from the U.S., you will need to fly through Oslo, London, Paris or Amsterdam, depending on your airline of choice. From Stavanger, you can take a bus or ferry or drive your own car to Preikestolen Mountain Lodge, the starting point for hikes to Pulpit Rock. Cruise ships also dock in Stavanger, as it is considered a shortcut to the beauty of the Norwegian fjords, and most cruise lines offer half-day and day trips to Pulpit Rock as part of their itineraries.

Avoid peak times: Pulpit Rock already was a popular destination before the Mission: Impossible franchise came along, and Gran says tourism experts are expecting crowds to surge. “We’ve also had an unusually warm summer, so more people are seeking outdoor adventures,” she says.

June, July and August are Pulpit Rock’s high-traffic months, though Gran says April, May and September also offer good weather with fewer visitors. Think about mid-week visits vs. weekends, when locals or tourists from neighboring countries tend to seek out the destination, and consider hours other than noon to early afternoon, when people love to each lunch on or around the plateau while enjoying the view. “You can do a sunrise hike if you’re OK with getting up early, and there are also hiking tours that include sunrise yoga off to the side of the plateau,” Gran points out.

Because of southwest Norway’s close proximity to the Arctic Circle, the area stays light quite late during the summer, making early-evening hikes an option as well. On Wednesday evening, Paramount hosted a Fallout screening for 2,000 people near Pulpit Rock’s plateau, partly feasible because of the late hours available, Gran says. “The area doesn’t quite get the midnight summer sun that you will find in the northern part of Norway, but you can still sit outside and read a book until 11 or 11:30 at night,” she adds. 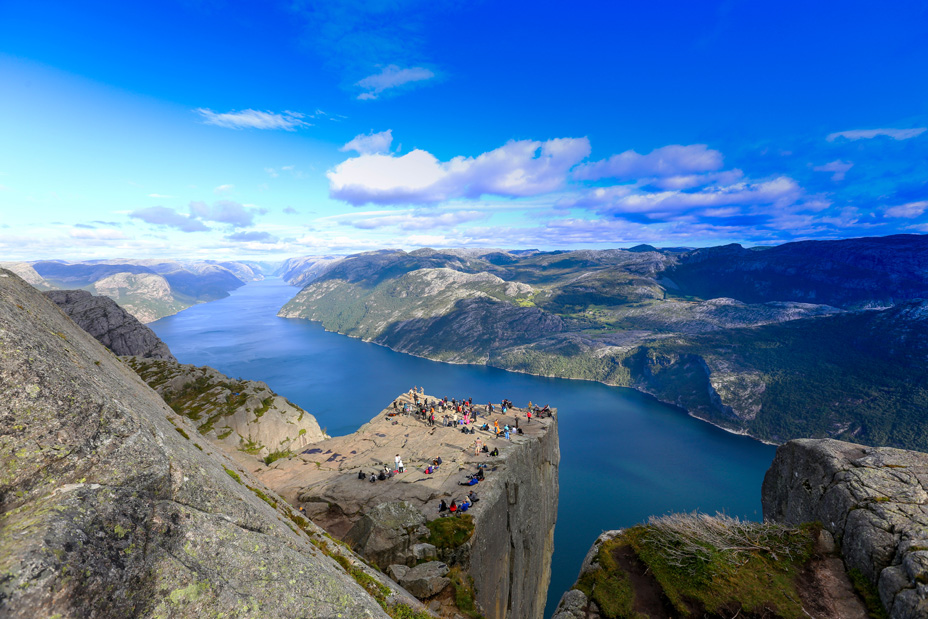 Plan a minimum of four hours: From Preikestolen Mountain Lodge, the 2.4-mile hike isn’t too strenuous, though you should be reasonably fit. “Unless you have any physical constraints, we always say anyone can do it,” Gran says. “We see multigenerational families all the time, grandparents going up with grandchildren.”

The hike should take approximately two hours going up and less time coming back down. Along the way, visitors will encounter some steep steps and craggy rocks that can be slippery in the rain, so Gran advises good-quality hiking shoes and dressing in layers for every weather possibility. “You’d be surprised how many people don’t think about how the climate will be different 2,000 feet up,” she says.

You don’t have to hike: Options are available if you’re afraid of heights or just not interested in the 2.4-mile climb. Two types of tour boats will take you through the Lysefjord below: a larger, more leisurely vessel or a smaller RIB, or rigid inflatable boat, that Gran says adds a bit of adventure to the experience. “[RIBs] go quite fast and can fit in the more narrow passageways along the mountains, and also brush up against the waterfalls,” she explains. “It can be quite thrilling.”

If you’re thinking about Mission: Impossible-level thrills, private helicopter charters are also available, though a little pricey, averaging $500 for one hour.

Don’t try to be an action star: Once you’ve reached Pulpit Rock’s plateau, enjoy your time, take your selfies and get as close to the edge as your nerves will allow, but erase all thoughts of being a daredevil from your mind. “There are no fences [on the plateau], and that’s part of the Norwegian lifestyle,” Gran says. “We love promoting Pulpit Rock as part of everything Norway has to offer, but no one should even think about doing what Tom Cruise did.”