While some designers looked to small-town America for their spring 2018 collections, drawing inspiration from our country’s nostalgically mass-manufactured (and sometimes horrifying) past, others looked to Mother Nature — but with a streetwise update.

Chelsea Hansford and Daniel Corrigan, co-creatives behind Simon Miller (Selena Gomez and Emma Watson are fans), and Aussie-turned-New Yorker Dion Lee (whose designs are a favorite of Kendall Jenner’s and Cara Delevingne’s, and who attracted Riverdale‘s Lili Reinhart to the front row), both drew upon the earthly elements for their Saturday afternoon presentations.

At Simon Miller, hints of the Congolese rainforest manifested in bright colors, from mustard yellow that clashed with heliconia pink to azure blue color-blocked with jungle green. The nature theme was also present in the textures, including supple leathers and shiny patents that were reminiscent of the waxy surfaces of fat rainforest leaves. 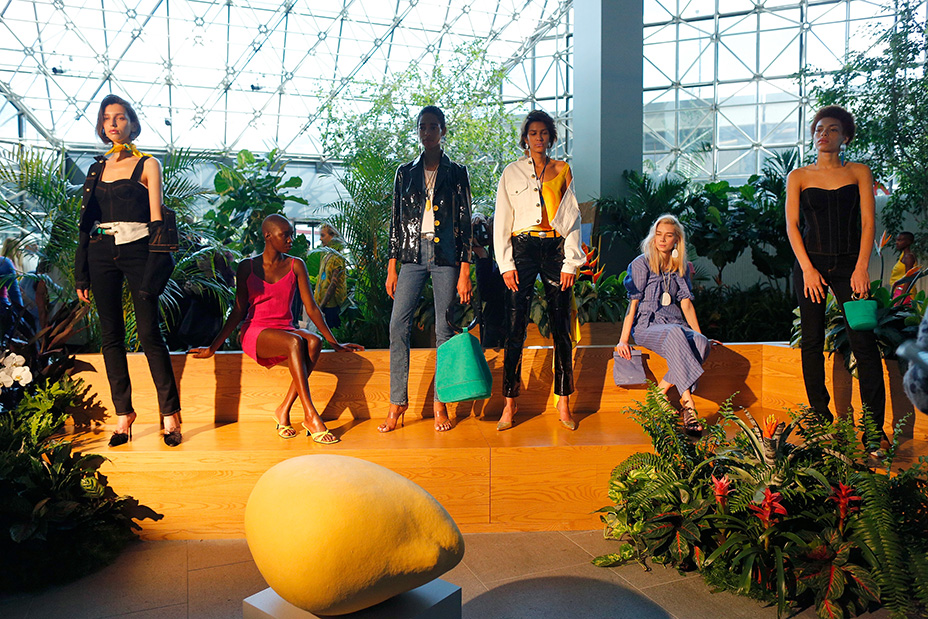 Hansford and Corrigan also collaborated with artist Leonard Urso on a collection of jewelry, using two of the sculptor’s common motifs, hands and faces, on brightly colored pendants, earrings and the clasps of belt buckles. “Leonard was my neighbor [in Rochester] growing up and my parents collected his art,” said Hansford of how the collaboration was put into motion. “He’s always been a huge part of my homes and my worlds — so I asked him to do a jewelry collection.”

It was denim — a staple of the brand’s “Japanese fabrication and modern American craftsmanship” foundation — however, that gave the collection its urban twist in the form of dark-washed bustiers, bra tops and high-waisted tapered jeans with thick white stitching.

At Dion Lee, the designer’s Sydney roots were evident in the beach-inspired elements. Colors washed over the audience like a tide, starting with soothing grays, whites and pale blues, cresting with two almost neon pink looks, and then receding with seaweed greens, peachy nudes and navys reminiscent of seascapes and sea life.

Other “surf-influenced” aspects included spongy, towel like materials draped loosely — although with extreme precision, a hallmark of Lees aesthetic — over the shoulders, and thick-soled thong sandals that were paired with nearly half of the looks.

“It is beachy, but in a slightly more urban way,” said Lee alluding to the city-ready pieces, which included shiny windbreakers, high-rise jeans and suit-inspired pieces with an asymmetrically tailored twist. Silver hardware-like ear cuffs, thick glasses straps and knee-length bike shorts peeking out beneath shorts and skirts also added to the fashionable commuter vibe.