Continue to The Hollywood Reporter SKIP AD
You will be redirected back to your article in seconds
Skip to main content
August 27, 2017 5:19pm

Pink has been breaking down barriers since her punk classic Missundaztood debuted in 2001, and at Sunday night’s MTV VMAs, she proved that not much has changed.

The singer, who is being honored with the Michael Jackson Video Vanguard award at this evening’s show, arrived at The Forum in Los Angeles with her husband, motorcyclist Carey Hart, and their 6-year-old daughter Willow Sage Hart, all clad in matching pinstripe pantsuits. Unlike some of the suits we saw on the red carpet earlier this year during awards season, the singer and her fam went with oversize menswear suits that were more mob boss-chic than Hillary Clinton’s preferred Ralph Lauren picks.

During her awards speech, Pink shared an anecdote about her daughter that may have hinted at the reason behind her and her family’s look. She shared that while taking Willow Sage to school, her daughter said to her, “Mama, I’m the ugliest girl I know,” adding that she felt she looked like “a boy with long hair.”

In response, the singer went home and made a PowerPoint presentation for her. “In that presentation were androgynous rock stars and artists that live their truth,” she said, dropping names like Michael Jackson, David Bowie and Janis Joplin. She also explained, “When people make fun of me, [they] say I look like a boy, I have too many opinions, my body is too strong. Do you see me growing my hair? Do you see me changing my body?”

She continued, “So, baby girl, we don’t change. We take the gravel and the shell and make a pearl. … Thank you for being your true selves and for lighting the way for us.”

Pink is in good company as a recipient of the prestigious Vanguard award; previous winners include Rihanna, Kanye West, Beyonce and Justin Timberlake. 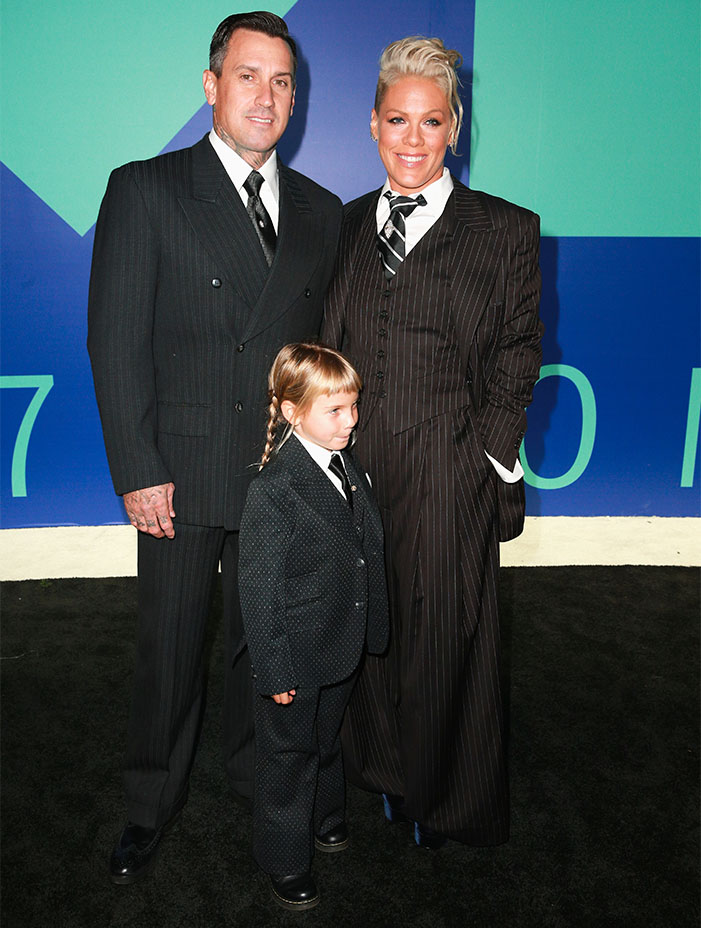