Norman Norell and Hattie Carnegie may not be household names, but their role in shaping American fashion is as vital as Marc Jacobs, Ralph Lauren and Donna Karan. That’s one of the takeaways of a just-released book about New York Fashion Week, from its sleepy beginnings to the high-wattage, celebrity-laden productions we know today. 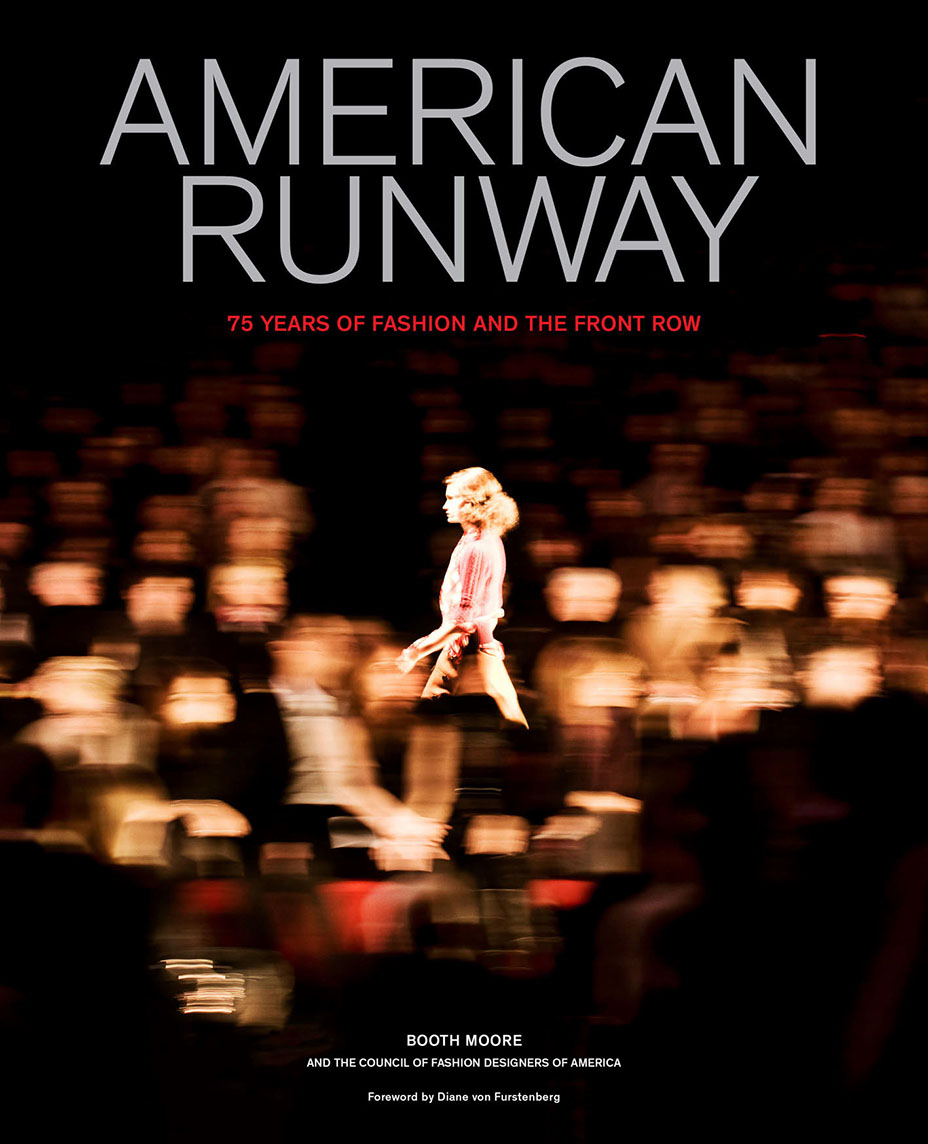 From those World War II-era presentations to live-stream events now viewed in real time around the world, American Runway discusses the moments that have shaped New York’s place on fashion’s global stage, luring pop culture figures like Andy Warhol along the way. As its title implies, the book traces the extensive path of American fashion, starting with presentations that were decidedly without fanfare. “We set up chairs in my office at 40 West 55th Street,” Lauren remembers of his first women’s collection, for the Fall 1972 season. “There were only ten or fifteen editors and about ten models. They strolled in one at a time, and I talked about the clothes. Looking back, I loved that intimacy.” 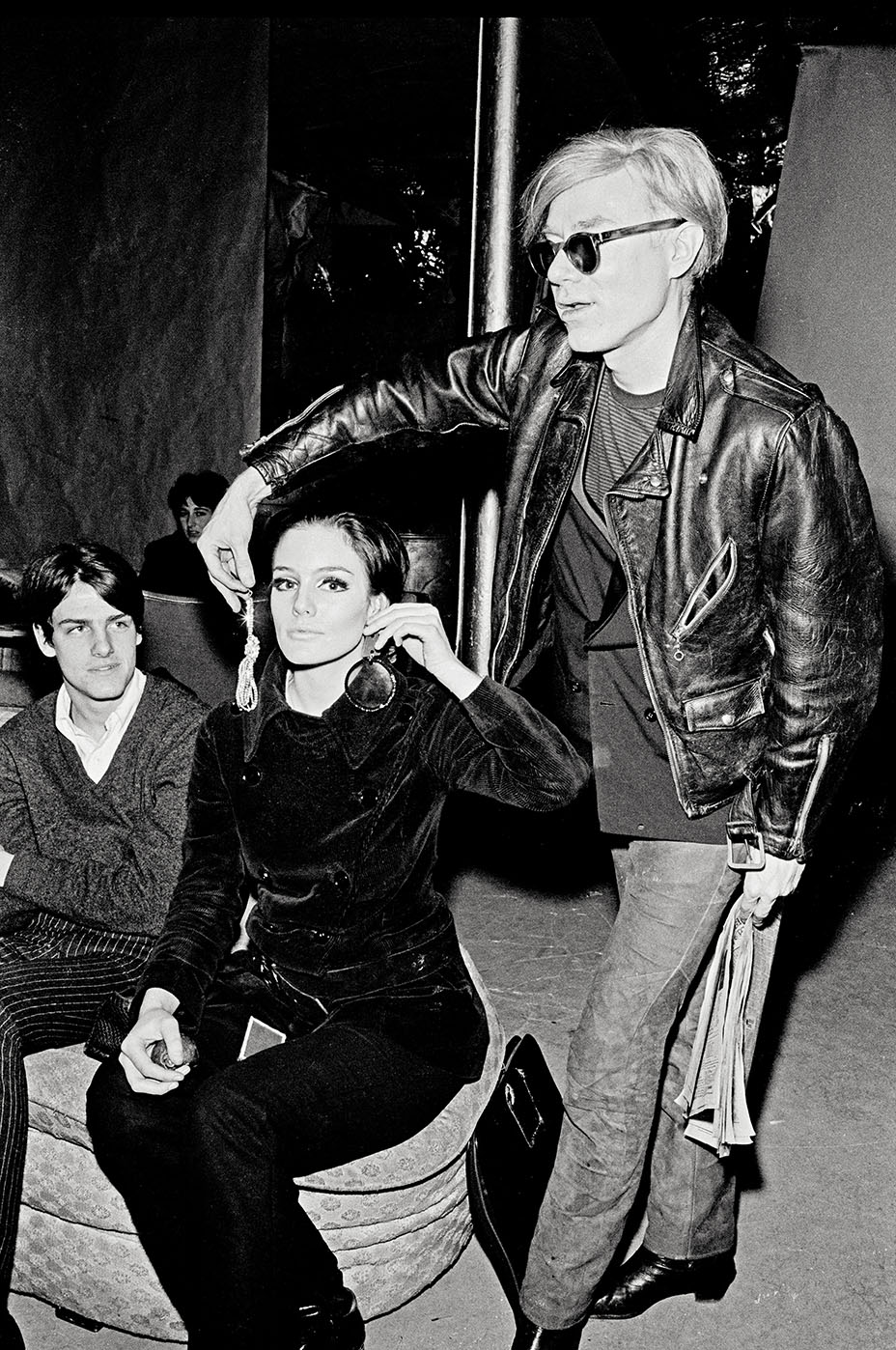 Lauren soon was joined by Calvin Klein, Geoffrey Beene, Carolina Herrera, and other names that have come to epitomize American design, but Moore points out that, by the early 1990s, the growing pains were showing. “If there were fifty designers showing during a season, there were fifty venues,” she writes. “Some weren’t designed for big events and were difficult for the press to get in and out of, and others were downright dangerous.” As the turning point in New York’s crowded and cluttered fashion-week schedule, Moore recounts the now-infamous story of plaster falling from the ceiling at a Michael Kors show in a Chelsea loft in April 1991, bruising the head of Suzy Menkes, then-fashion editor of the International Herald Tribune. “I have been in many rickety places over the years. But that was a moment when people started saying that this was below standards expected from such a great city and its ebullient fashion,” Menkes says. 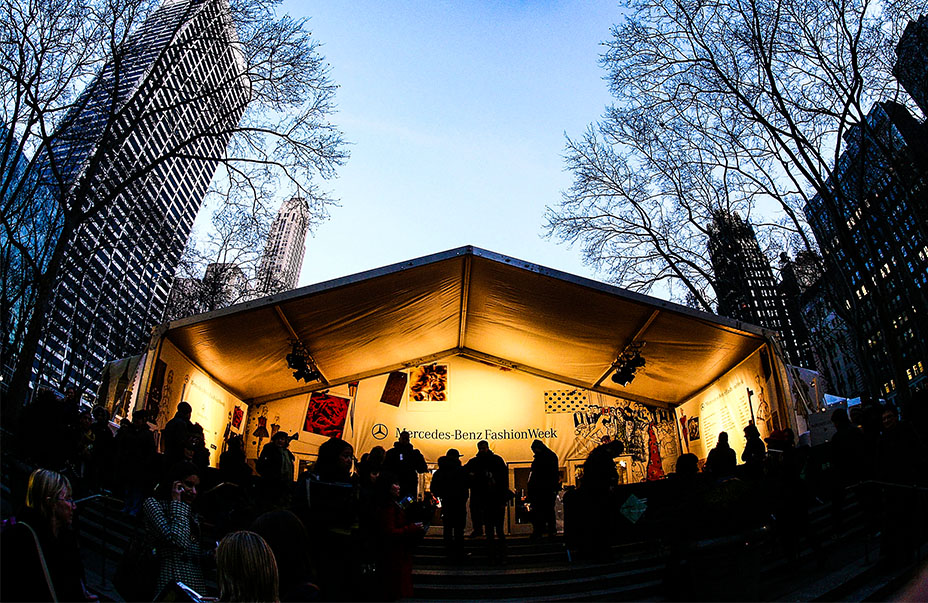 Enter Fern Mallis, the first executive director of the CFDA, which had established a mandate to formally organize the New York shows, providing safe venues and a set, shared schedule. Mallis and then-CFDA president Stan Herman hit upon the idea of erecting white tents at Bryant Park, located on Sixth Avenue between 40th and 42nd Streets behind the New York Public Library. To fund “The Tents,” as they became known, Mallis secured corporate sponsors that ranged from Evian to Clairol to Cadillac. Fashion magazines also put competition aside to support the effort, Herman recalls: “Harper’s [Bazaar] gave money at the same time Vogue and Elle gave money; they all joined hands tog 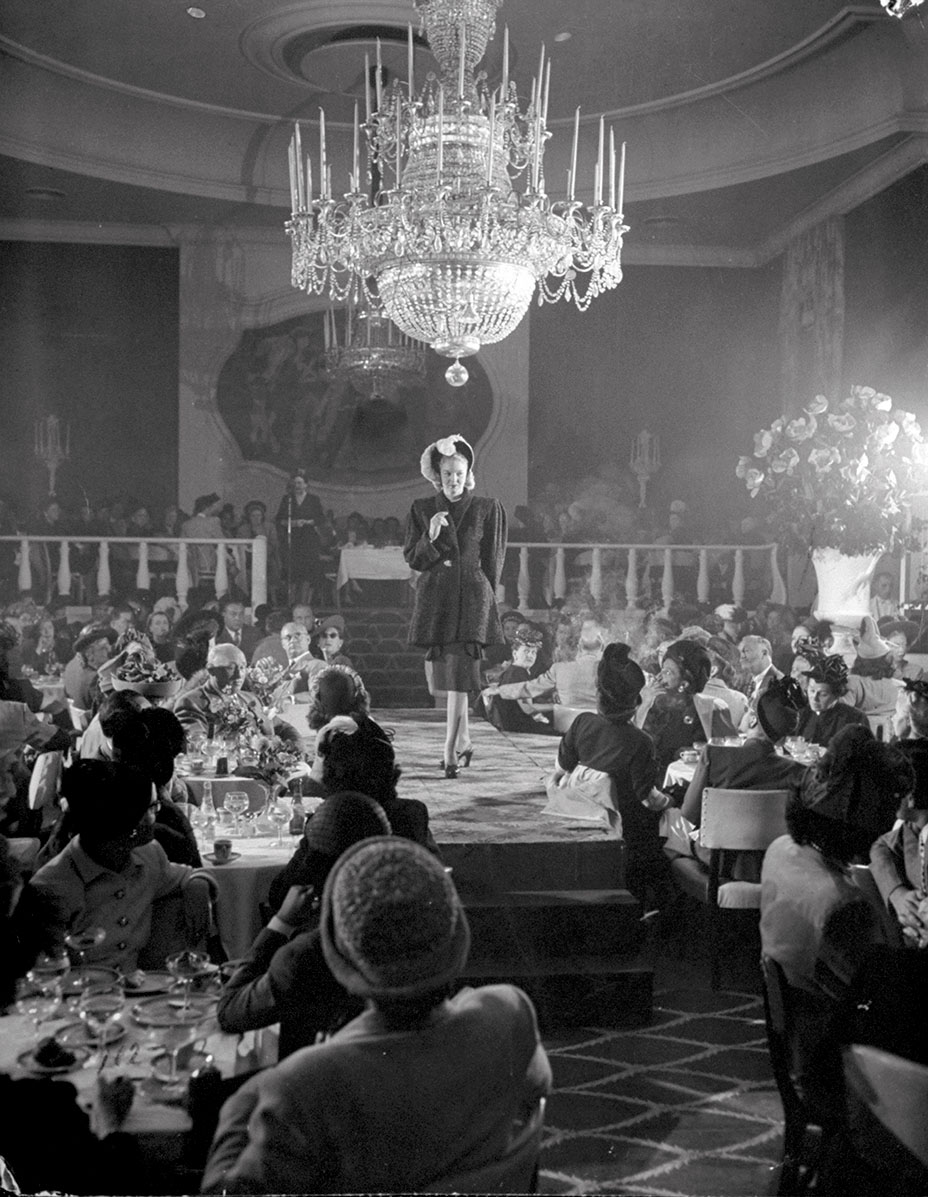 ether, something that will never happen again.”

Like capturing lightning in a bottle, the Bryant Park tents quickly became the symbol for the twice-yearly glamour now synonymous with New York fashion, with celebrities ranging from Jon Bon Jovi to Barbra Streisand (at good pal Donna Karan’s shows) to Donald and Melania Trump occupying the front rows. Perhaps it’s also no accident that the early-‘90s supermodel era was birthed in almost the same moment, and American Runway doesn’t skimp on those images, with liberal use of photos featuring Kate Moss, Linda Evangelista, Naomi Campbell, Christy Turlington, and other still-revered “supes.” Combine front-row A-listers with stratospheric supermodels, and gone were the quiet, intimate presentations; New York shows became rooted in – and known for – celebrity and spectacle (Moore also thoughtfully includes a debate on whether the newfound dazzle overshadowed or enhanced the clothes). 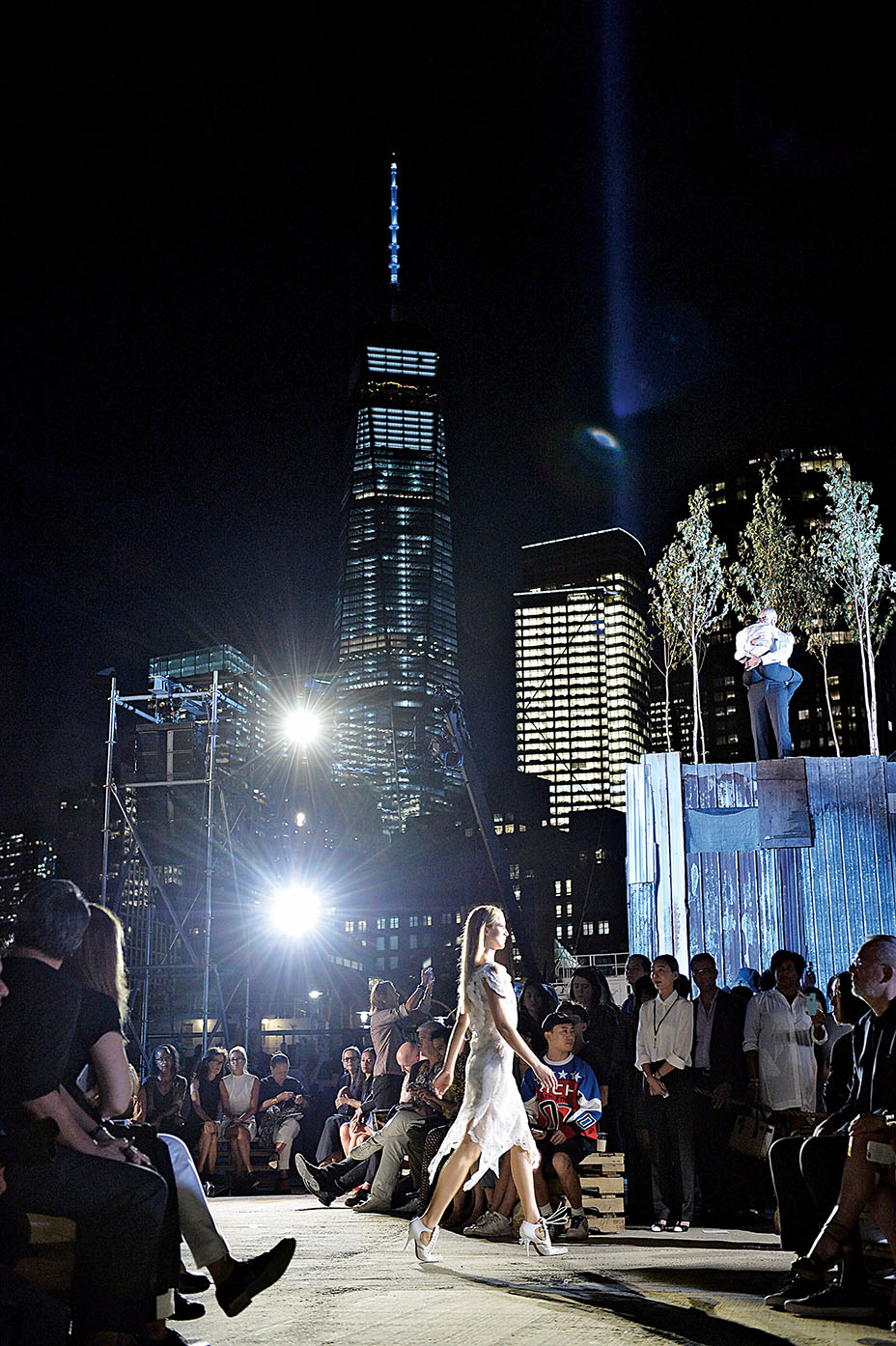 Perhaps the biggest change? Designers like Alexander McQueen, Donatella Versace and Miuccia Prada flocked across the Atlantic to show their collections in buzzy Bryant Park, where Madonna and Woody Allen dutifully turned up to take part in the theatrics. Conversely, Moore also points out the up-and-coming actresses who battled (and still do) for front-row tickets, eager for paparazzi photos and publicity. In 2001, a then-unknown Sofia Vergara was escorted to the shows by stylist Philip Bloch, who reveals to Moore a phrase he had coined in his office: “No front row, we don’t go.”

With New York’s high-profile stage now firmly established, American Runway segues into the Hollywood opportunities that came calling. “I underestimated the interest in fashion and how people are intrigued by the alchemy of something,” says Kors of his early reticence about doing Project Runway, the show that became a megahit in 2004 for bringing the design process into everyone’s living room. (Project Runway producer Desiree Gruber also mentions executive producer Harvey Weinstein’s initial disinterest: “He didn’t understand the excitement of bringing an idea from a designer’s sketch, to fabrication onto a model’s body, to the runway,” she remembers.) 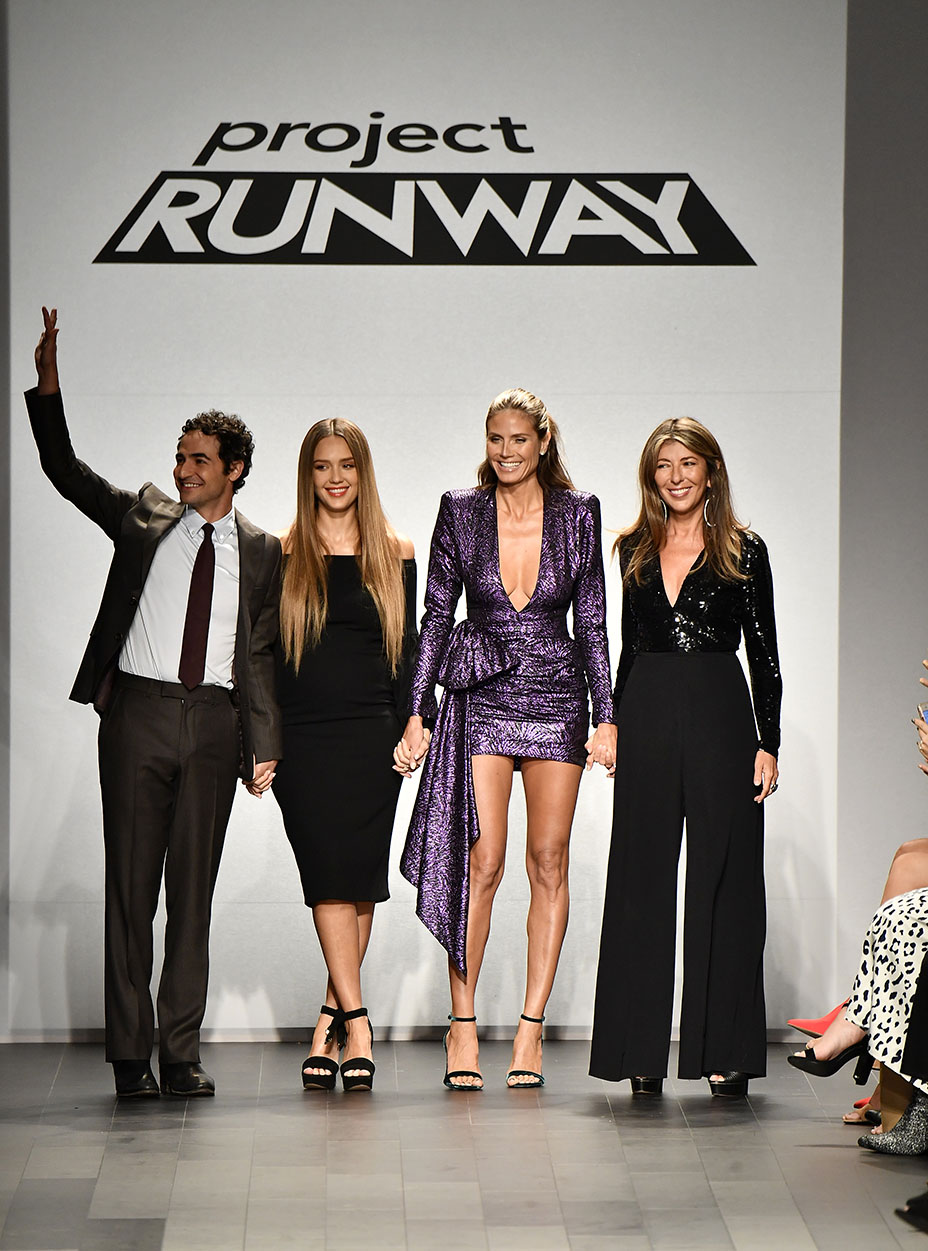 The Internet’s undeniable influence and how bloggers have impacted the shows are also covered, but the most irresistible elements of American Runway are the first-person takes by a healthy contingent of industry professionals. “What I love about the runway is that anything can happen,” says celebrity makeup artist Pat McGrath, while Cindy Crawford recalls a hairstylist doing touch-ups until the last possible moment: “You are literally being manhandled until the second they push you out on the runway. That’s what made it exciting and fun, because it’s a live performance.”

Current conversations about fashion shows often focus on who is sitting in the front row or how a design from a live-streamed event is available online the second it appears onstage. Fashion Week’s continued evolution is indeed complicated: The white tents are long gone, largely replaced by warehouses and other cavernous venues downtown, and while the “rickety places” Menkes mentioned are no longer a factor, the schedule is once again all over the Manhattan (and Brooklyn) map. Also, unlike those blazing Bryant Park years, American labels like Rodarte, Proenza Schouler and Joseph Altuzarra lately have been making a reverse trek, opting to show in Europe vs. New York. 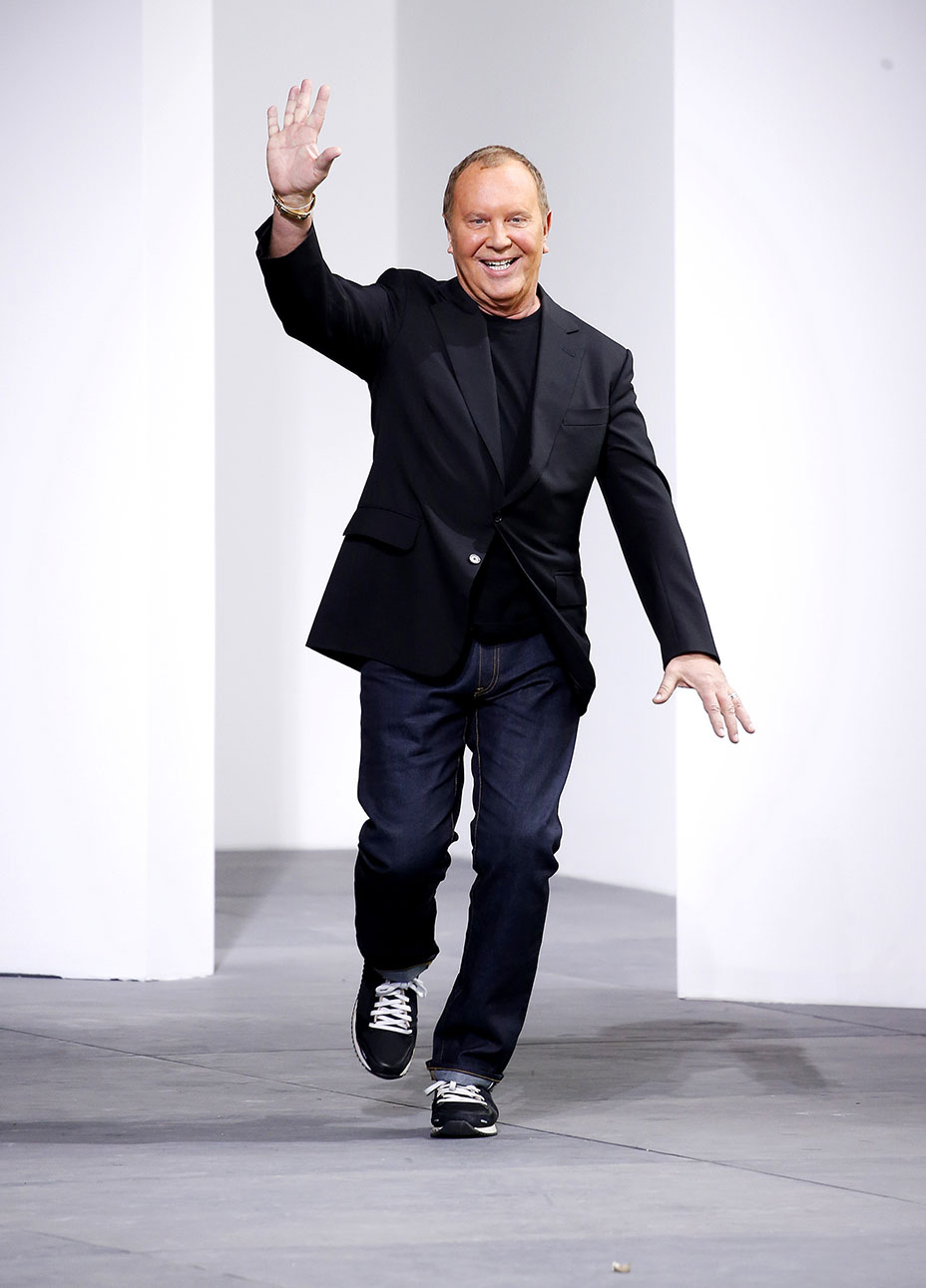 Regardless of venue, American Runway ultimately reminds readers that today’s catwalk is a stage on which fashion transcends commerce to become theater. Says Jacobs of his fashion-show-as-spectacle sensibility: “The idea of presenting clothes felt like an opportunity to transmit a feeling and a spirit and to move people in some way and make them feel involved in an experience that was more than just seeing clothes.” American Runway excels at detailing both that experience and New York fashion’s rich history, offering a comprehensive take on why these twice-yearly shows will never fail to beguile anyone who loves style.