Who’s directing the new creative business-casual dressing? That would be Hollywood executives — power players in an image-driven industry in Los Angeles, a city with growing global fashion influence. “Right now, all eyes are on the West Coast,” says Josh Peskowitz, a former Bloomingdale’s men’s fashion director and current partner in Culver City store Magasin that counts nearby studio execs and agents among its clientele. “The ‘California aesthetic‘ is influencing fashion in Europe, Japan and New York. There’s more ease here, fewer ties.” Adds personal stylist Meg Gallagher, who works with industry executives: “All my directors, producers and screenwriters are casual. Even dressed up [means] a jacket with nice jeans or pants. Studio heads get dressed, but are still not wearing suits every day. It’s L.A.!”

Jackets do come in handy to signify not only style but also sagacity, says Ben Winston, 35, the British executive producer of The Late Late Show With James Corden, who confesses that he had to watch a YouTube video to learn how to tie a bow tie for the Emmys. “It’s quite ‘showbiz‘ to make an hour of live TV every night, and there’s something to dressing a bit smart for that, so every day [41-year-old fellow executive producer] Rob Crabbe and I wear jackets,” he says. “Late night is traditional. The host is always in a suit. We are quite young for showrunners, so maybe the jacket is a subconscious thing to make [CBS Entertainment president] Glenn Geller and [CBS Corp. CEO] Leslie Moonves not feel like they’ve given the kids the keys to the cupboard.” Winston says of one of his fancier work suits: “My only tailor-made suit, by British tailor Thom Sweeney, was a gift from James Corden for my last birthday.”

When not in full-suit mode, says Magasin’s Peskowitz, “California leads the charge toward color, texture and pattern. How can you wear all black when it’s sunny out all the time?” Technicolor is the calling card of Prentice Penny, executive producer and showrunner of HBO’s Insecure. “Take a basic navy blue suit and change up the shirt to pink or purple or orange and throw in an ornate pocket square. It’s like cooking: You change the sides and the wine, and it’s a whole new dish,” he says. “It’s the details. I take the laces out of wing tips, and they just got cooler, and I wear them with very formal suits. For the Insecure premiere, I wore wing tips and a Star Wars C-3PO Lego lapel pin, all painted gold by my friend Erik Dixon, who owns the store 1 Man’s Trash [and is a style adviser]. My son asked why I was wearing gold shoes, and I said, ‘Because nobody’s going to talk about brown.’ ” MGM executive vp production Adam Rosenberg also is a proponent of color: “A well-fitted suit with a colorful shirt and socks is noticeable but not overpowering. In a city where you can never be underdressed, I still always prefer to be slightly overdressed.” Notes Rosenberg of his bespoke streetwear vibe that counts dandy basketball icon Walt Frazier and the psychotically stylish (and fictional) Patrick Bateman as influences: “As a studio executive, you have to keep an eye on the creative and the numbers. I want to show artists, producers and directors that I have some taste so they trust me to help further their projects.” For his part, Penny recalls a childhood lesson in dressing learned from his grandfather, who used to sit in his suit all day Sunday after church: “When I asked him why, he said, ‘Because I never know who’s going to stop by,’ ” says the L.A. native. “You never know who you’re going to meet.”

Hollywood Shopping Guide: Where to Shop for Men of All Ages

The single sartorial weapon behind some of the best-dressed Hollywood execs? A great tailor or made-to-measure resource: “You could get that really inexpensive suit that maybe is a little too boxy or too long. A few alterations can make a huge difference,” says CEO Brian Robbins, founder of DreamWorks multimedia firm AwesomenessTV. “I think anyone, young or old, can look like a million bucks without having to spend it.” Motion picture talent agent and founding partner of ICM Partners Chuck James, who coaches younger execs on looking professional, agrees: “Men are terrified of looking like they try too hard, so they get stuck wearing suits off the rack that look like they have borrowed their father’s old suits. You can literally look five pounds slimmer if your suit fits.” Penny, who also is a host of TruTV’s series Upscale, set to air in April, is a devoted client of Patrick Henry, aka Rich Freshman, who crafts bespoke suiting and shirting for Lee Daniels and director F. Gary Gray. In 2015 alone, Gray ordered more than 20 suits. Rosenberg recommends Susan Ilyayeva at Hans the Tailor: “probably the most consistent relationship in my life.” He also relies on made-to-measure shirts from Biemonte Wong’s Tailor, a Hong Kong-based company that sets up shop in a Beverly Hilton suite twice a year (the next session runs Nov. 15 to 17; email BiemonteWongsTailor@gmail.com for an appointment). “[MGM Motion Picture Group president] Jon Glickman took me one year, and I keep going back,” says Rosenberg. “They know my exact measurements and the style I like, so I just pick out different fabrics.” NBCUniversal vice chairman Ron Meyer, former 20th Century Fox film chairman Jim Gianopulos and Dick Wolf order made-to-measure shirting and ties from Anto Beverly Hills, according to owner Anthony Sepetjian. WME partner Ari Greenburg, director David Fincher, Fox Networks Group president and COO Randy Freer and host Chris Harrison order made-to-measure suiting, jackets and shirts from San Francisco-based e-tailer Trumaker. Fifteen local “outfitters” are on call for fittings and advice; orders can be placed by text or online. One filmmaker owns 12 of the same shirt “so he can focus on making movies,” says Trumaker CEO Mark Lovas.

For twists on top of impeccable tailoring, look to more casual layers. “The new officewear is a blazer, tailored jeans or slacks and a polo or button-down,” says Andrew Weitz, ex-WME agent and founder of style consultancy firm The Weitz Effect (info@theweitzeffect.com). “Doing a zip-up over a T-shirt or button-down and a blazer over that is a chic Italian look that also hides any belly.”

'Crazy Rich Asians' Author on Extravagant Chinese Spending Habits: "It Was Like Giving a Pubescent Kid an Amex Black Card"

Hoodie blazers and pants with an athleisure aesthetic are inching into the office, adds Weitz (who in October started offering group workshops at firms like WME): “What you see all these guys doing are [new versions of] the sweatpant craze: You can wear upscale jogger dress slacks [with an elasticized hem] from Kit & Ace, Ralph Lauren or Uniqlo with a blazer or button-down.” Magasin’s Peskowitz mentions as the new silhouette the “carrot fit — with more room through the seat and a little bit longer rise, but then it’s tapered at the bottom and cropped. It’s a fit that’s flattering to a lot of different body types.” Paul C. Witt, owner of Wittmore — stores that serve such clients as former 20th Century Fox Film’s Paul Hanneman and producer Ned Martel — adds that “soft, unstructured jackets are a big thing; so are ‘shackets’ [shirt jackets] and tailored sweaters like Armoire Officielle’s merino zip cardigan.” Peskowitz adds: “Creative professionals have to be in so many places over the course of a day now — in meetings at film sites, out for drinks, on airplanes — so comfort is key and that’s why I think athleisure has caught on. But there’s a way to do athleisure where you still look and feel really polished. When you put it on a jacket that’s unconstructed, isn’t lined and has no padding in the shoulder, you look like you’re put together, but you feel like you’re wearing a cardigan, like our Harris Wharf London knit jackets.”

Sneakers are a creative-power staple, with such top recommendations as a new Tod’s slip-on haircalf sneaker hybrid or styles by Common Projects and Cipher (from Weitz), high-tops at Flight Club on North Fairfax (from Penny, who owns 30 pairs) and Tom Ford sneakers (from ICM’s James, who calls them a “game-changer”). Robbins wear them everywhere, with everything: “For a black tie event, I’ll wear a suit with a casual shirt and sneakers. I’m a sneaker fanatic. I love old-school [Nike Air] Jordans, Common Projects, and you can never go wrong with a fresh pair by Converse or Lanvin.” Winston adds that his uniform is a jacket, T-shirt, chinos and “a smart pair of sneakers. I used to have a Nike addiction — at one point I had about 60 pairs, because Nike sponsored my first project, the 2007 documentary film In the Hands of the Gods. … I think the Nike guy was joking when he said I could have as many as I liked, and they’ve never regretted anything more than giving me that opportunity.”

Looking dapper takes time and interest, but it’s worth the investment. “Image can be a tough subject because it inches toward a kind of vanity and self-consciousness,” says producer Howard Gordon, a Weitz client. “I became conscious of dressing as I got older and realized I was wearing the same clothes since college. Looking in the mirror reminded me I wasn’t a college kid but the father of one. Unless you have a real sense of fashion, get professional help.” Aside from Weitz, Freshman also offers wardrobe consulting: “I help with how to put things together — who is your audience? You don’t have to shop. You can sit at home, pour a drink and this guy’s going to come over and make you look great.”

“Our Emmy nights were split across three [nights] because we were nominated in four categories. On the first night, I wore a Burberry suit. On the second, I thought, ‘Hold on, we won an Emmy in that,’ so I wore the same suit (I washed the underwear and socks overnight), and, bang, we won another. So on the third night, I went in thinking, ‘John Oliver doesn’t stand a chance!’ because I was wearing the suit. But my suit wasn’t as lucky.”

In addition to suits with original accents, says Penny, “I invest in a good pair of shoes in white or a weird [color] that I can wear with something straight-laced.” In a reversal of wearing a patterned jacket with solid pants, he recently “ordered a suit with a window-pane check pant, a different twist that people remember.” 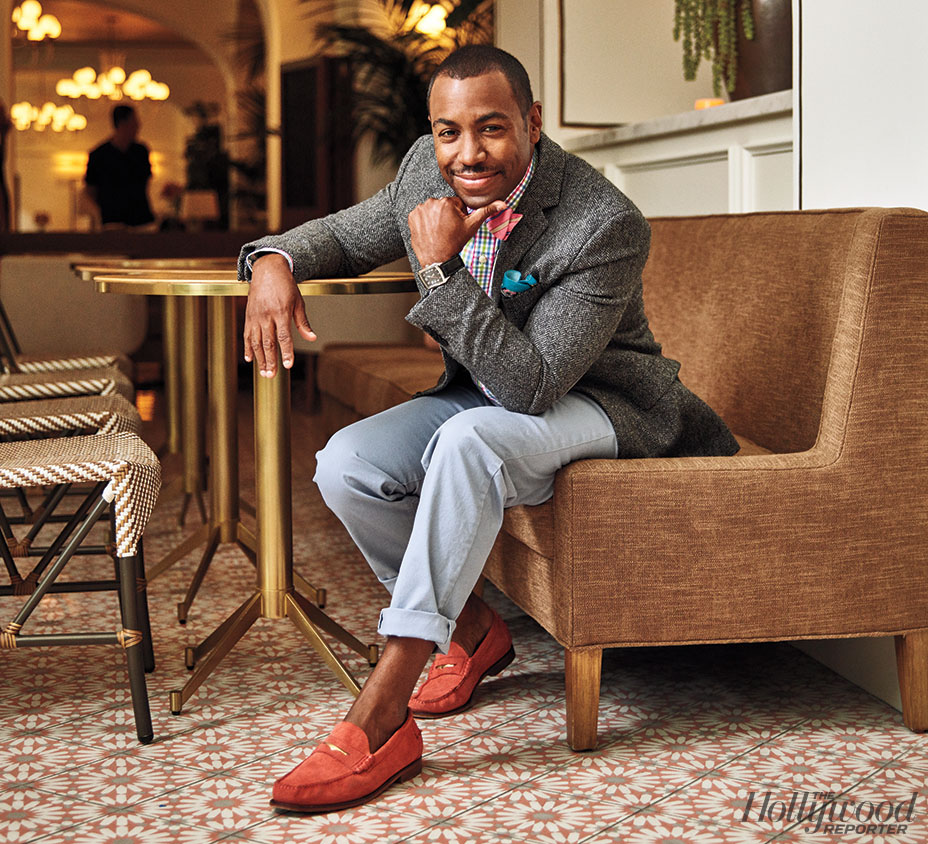 “Show business is both show and business, so I hope the presentation I make is a bit of both,” he says of his style, which is based on “grays, blues and blacks with bright sneakers or shirts that pop.” Rosenberg gets his suits tailored: “I am cognizant that designers are not designing clothes for me … or 5-foot-8 Jewish models.” 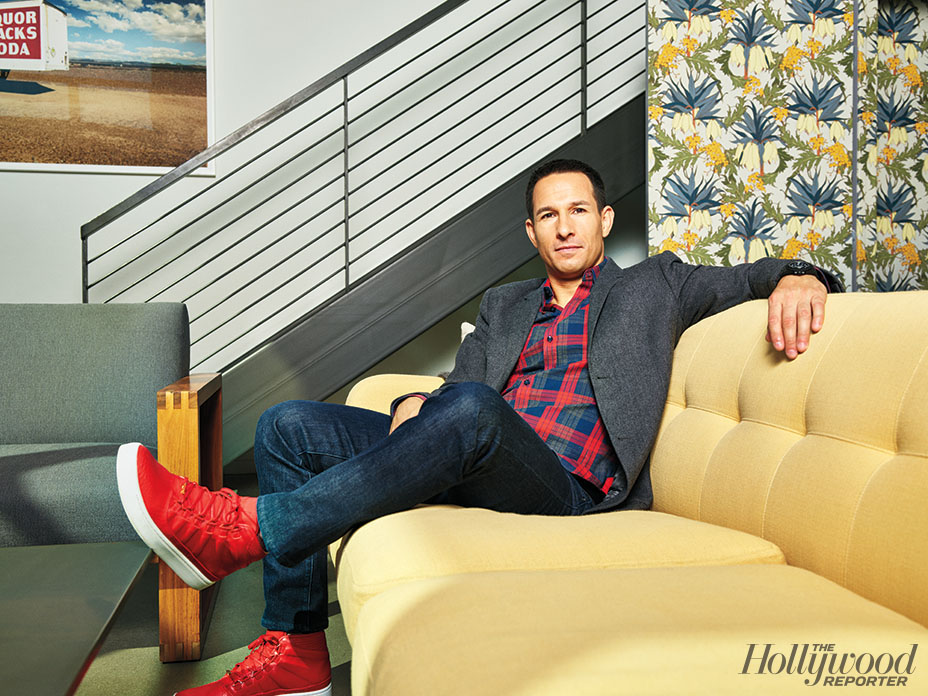 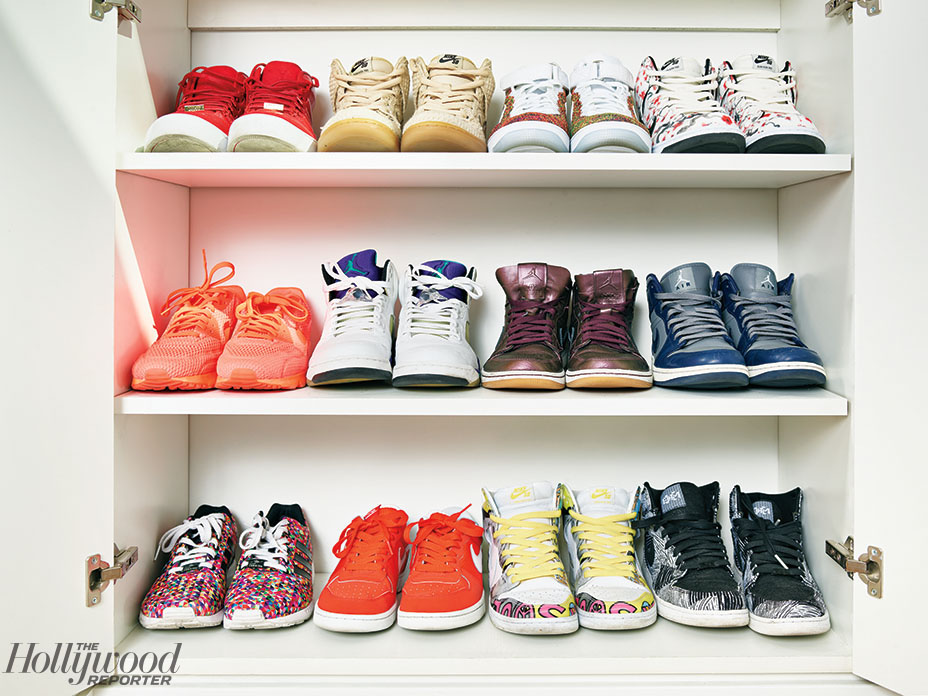