Over the weekend at New York Fashion Week, it wasn’t necessarily the clothes that left the most lasting impression, or even the message tees (“People Are People” at Christian Siriano; “Feminist AF” at Jonathan Simkhai). It was all the flinging, stomping and scowling on the runway — the posturing of our times.

Known for his legendary afterparties, Wang skipped right to it. The party was the show. Held at an abandoned theater in Harlem, with a beautifully decaying interior, guests bellied up the runway with beers in hand from event sponsor Peroni. (Can you really be subversive with a corporate sponsor?) Guests, many of them too old for such hijinks, bopped along awkwardly to a DJ hip hop set. (Ludacris’ “Move Bitch, Get Out Da Way,” felt a bit out of step with the moment, but anyway.) 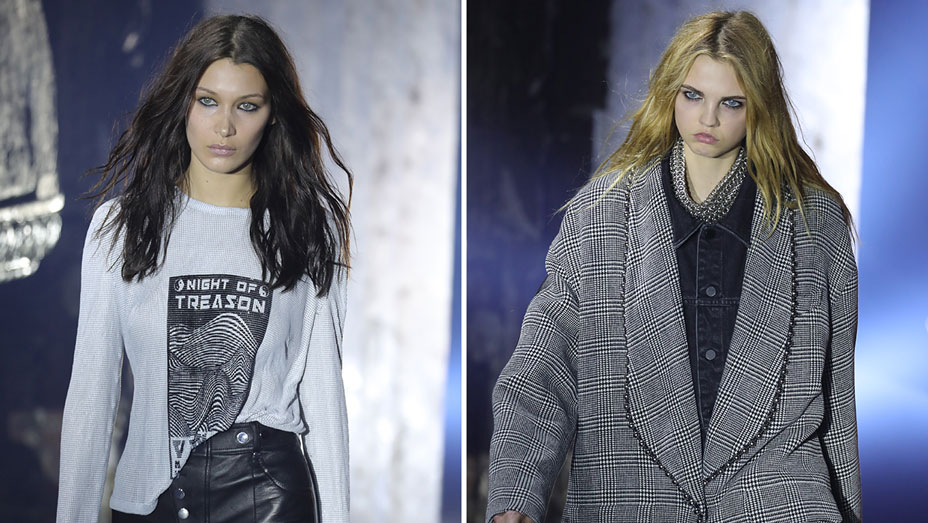 After the first model stomped out, it was all a blur of black, leather and studs, mannish tailoring, “No After Party” leggings and such, much of it familiar from Wang’s past efforts, as well as the season’s obligatory angry T-shirt, which read, “Night of Treason.” For me, the more potent image was on the subway car home. The fashion crowd was already dressed for battle in the look of the moment: military jackets, boots or sneakers. Wang wasn’t the only one playing catch-up.

The Australian designer had his toughies flinging open an orange curtain and barreling out onto the runway as if they were ready to rumble, all to set the mood for military-inspired tailored wool blazers and short pants, worn with leather-link chains slung across the shoulder, or hanging from the hip like artillery belts. If these women had a softer side, it was the camo-patterned shearling coats in eye-popping orange and purple, worn with track pants and fuzzy Birkenstock sandals. Hey, comfort is a human right, too. 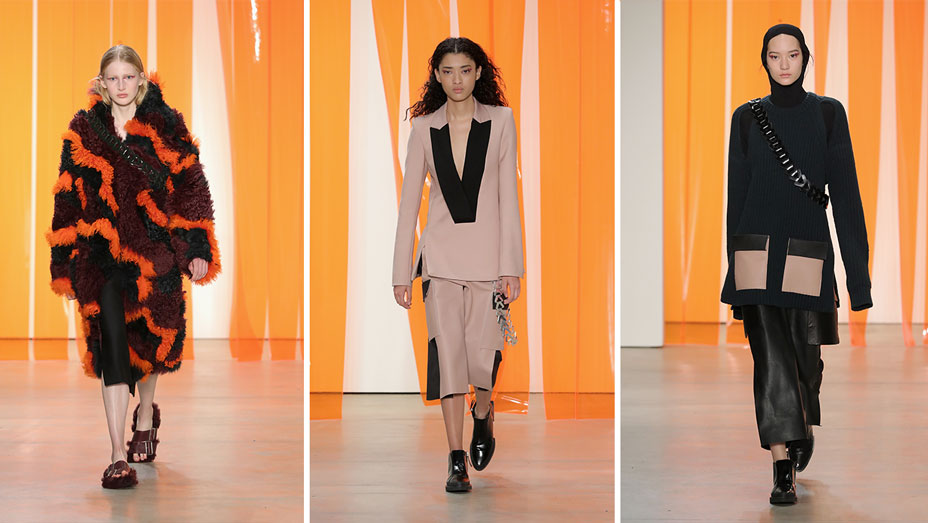 Creatures of the Wind

Shane Gabler and Chris Peters’ Creatures of the Wind collection was more subtly subversive. You might even call it pretty-in-punk. Take the first look: a purple silk trench coat that appeared innocent enough until you looked a little closer and noticed the “screaming people” silk jacquard. A black calfskin double-breasted jacket and schoolgirl plaid skirt suggested the uniform of a co-ed, only it was worn with naughty Latex knee socks. (Adding to the laminated coats and dresses at Calvin Klein on Friday, it made me think back to the famous line from The Graduate, “One word: Plastics.”)

Deconstructed fur coats with crystal embroidery, high-waist trousers with a low-slung belt, and a rose gold metallic fringe dress were also delightfully kooky. It’s no wonder Lena Dunham is a fan. It was easily the best show on Saturday because it wasn’t predictable. 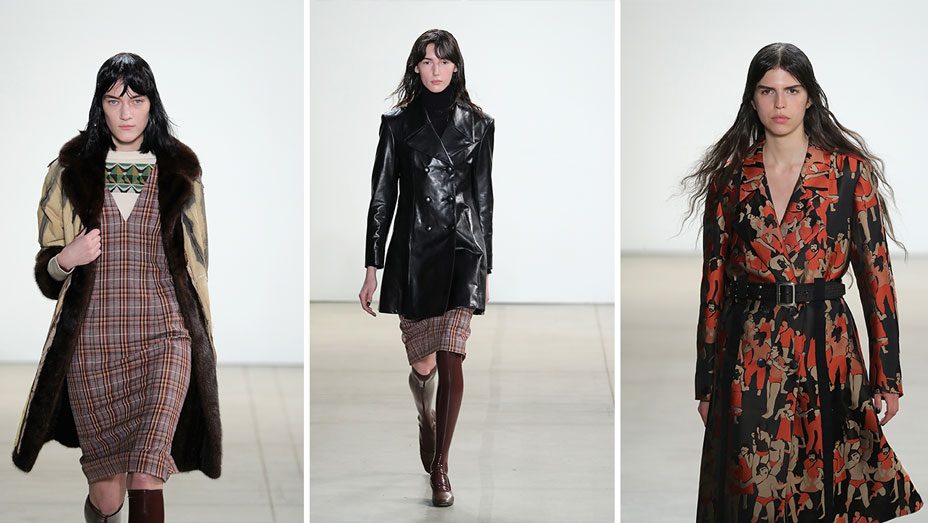 The label by Chinese designer Wang Tao made hay with exquisitely cut suits and coats that had a “dandified elegance,” as fashion historian Valerie Steele called it. Steele, who was wearing a Taoray Wang coat, was a fan long before Tiffany Trump, the president’s daughter with Marla Maples, aimed her spotlight at the designer. Trump wore the label for the swearing-in ceremony at the inauguration, and was in the front row with Secret Service in tow to support the designer Saturday morning.

“I think Tao’s aethestic is just unparalleled,” Trump tells THR. “She puts so much effort into the slightest detail.”

Tao’s rebel touch was a pop of pink, or a lacy under thing, juxtaposed with a tailored power suit. Her sculpted coat dresses, dramatic duster coats and high-waist trousers were on point, even if some of the fabrics in the collection felt a bit heavy. 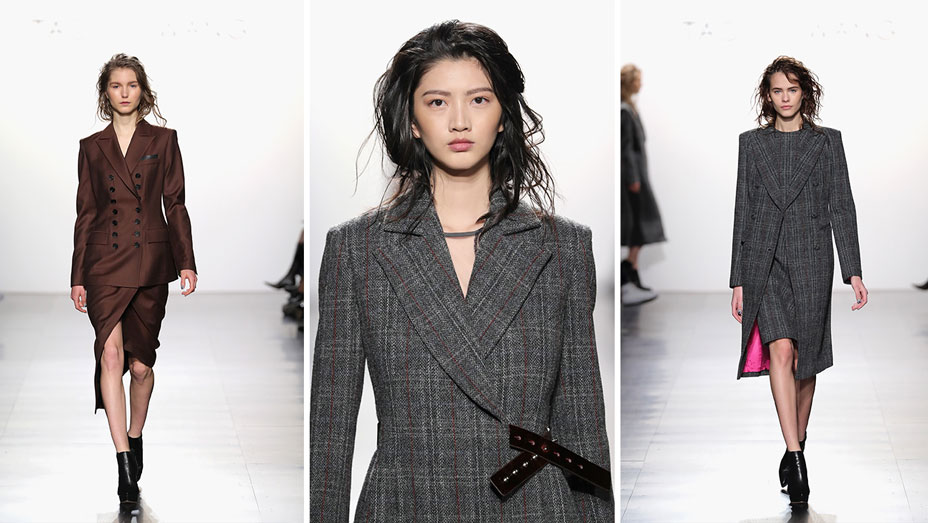 For Simkhai, the female power play came with a Spanish accent, which translated into embroidered matador suits, bedazzled denim and custom lace gowns designed to mimic the architecture of cathedral ceilings. There were several red-carpet ready looks at Simkhai, who is fast becoming a go-to for Hollywood ladies such as Kerry Washington, Kendall Jenner and Olivia Palermo (who sat front row). 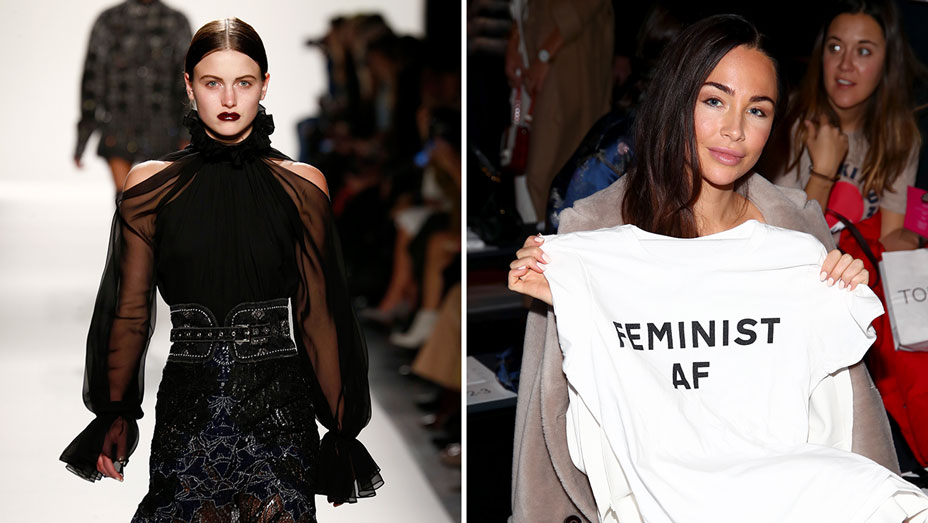 And on Friday night, Wu celebrated his 10th year in business by staying true to himself with a decadent collection of dramatic lace dresses, sexy suits and a pair of golden gowns. An Oscars hint, perhaps? 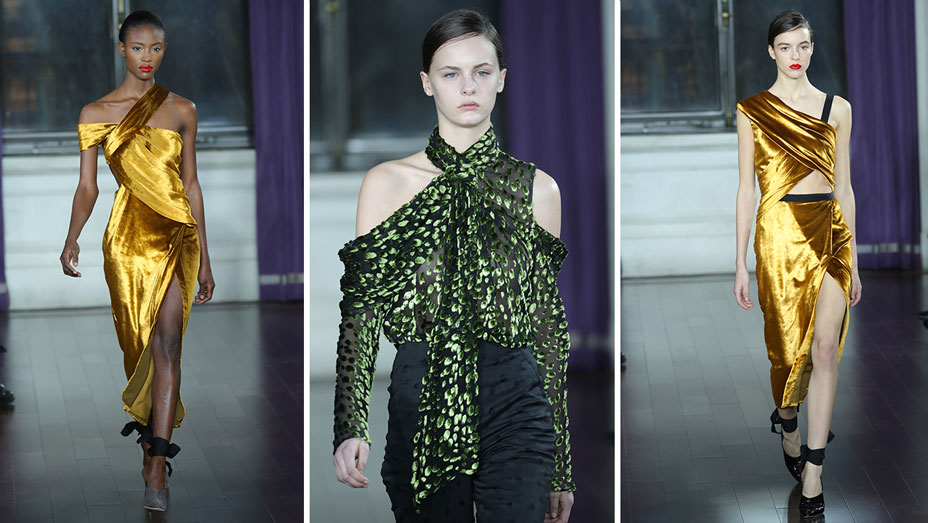