Justin Bieber kept up his daylong tour of NYFW Thursday evening in the front row of Kith Park, the evening blowout from fashion’s wizard of collabs Ronnie Fieg.  But instead of sitting next to the Biebs in the front row along with Alexandre Arnault, 2 Chainz and LeBron James, the singer’s fiancee, Hailey Baldwin, was the opening model in a school library tableau that spotlighted the Kith X Tommy Hilfiger team-up.

But even that couldn’t top the spectacle of Fieg’s finale. As a clang of church bells peeled, out of the darkness a familiar gold Medusa medallion appeared atop an iron fence, with “KITH” triumphantly emblazoned across the front to announce the Kith X Versace collection. With that, Bella Hadid strode out in a reworked version of the Italian house’s signature baroque pattern in a velvet puffa jacket over a matching print bra top and bicycle shorts. The new “going to the gym” look perhaps?

A four-paneled invitation to the show should have given a clue to the cinematic extravaganza engineered by Fieg, a production that had four “scenes.” After a long wait outside the Duggal Greenhouse at Brooklyn’s Navy Yard complex (much cooled-off temperatures, copious flutes of champagne and a postcard view of Manhattan all lit up across the water helped), guests were ushered in to a block of stadium seating facing a red-curtained stage.

After the curtains parted, revealing a forest setting, the show started off with the unexpected: a grey overcoat, slimly cut, over a track jacket and joggers in a pumped-up tattersall plaid, e.g. Fieg’s “kleaned-up” Kith take on menswear. Other must-have looks for Ronnie’s guys and gals followed, including shearling jackets, cheeky sweats with “Bergdorf Goodman” emblazoned across the front and down the leg and, biker-style leathers; and it all finished with a kitted-up snowboarder complete with a Kith-logo’d “tray.”

With that, a curtain at the side whooshed back and the entire block of seats started to move sideways as if on a giant conveyor as the audience was whisked to view the next setting, the Hilfiger collegiate setting. Fieg had Tweeted before the show: “Never worked harder on anything. Kith Park is going to change the way people view fashion shows. Forever.” If not forever, this man behind the curtains certainly found a memorable way to present more than 100 looks to the audience inside and the fanboys and the girls who love them online.

A couple dozen Tommy looks hit all the iconic ’90s touchstones with a Kith update. “K” replaced “T” on some of the rugbys and the familiar color-block T’s and parkas broken up with washed denim and preppie-style insignia pants. Tommy the man came out for a bow at the end, barely off the plane from his show in Shanghai days ago.

The seating block moved sideways again to face a ’60s tableau with a scruffy tent and and it was vaguely familiar looking but off-kilter…no it couldn’t be…in fact, it was another Lauren, Los Angeles-based designer Greg, who was behind the deconstructed tennis sweaters, olive-drab/denim mashups and outdoorsy plaids spliced with patched denim and fleece. 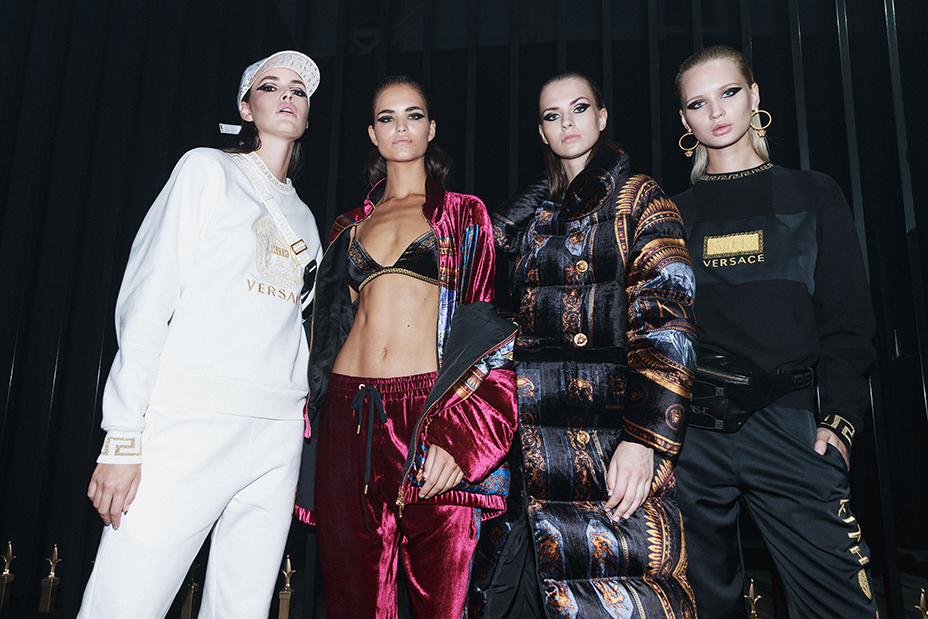 Then the final stop of the moving seats was Versace-land, where following Hadid, the looks included a navy overcoat with a gold crest over silk print shorts (for him) and velvet track suits again over a brassiere (for her), and signature graphic KITH/VERSACE faux furs (for both sexes). Fieg hit the stage for a bow — and the “Donatella” emblazoned cap on his head said it all.

Tadashi Shoji Looks to the Stars for His Runway