The damp weather at New York Fashion Week (wet through the weekend and all day Monday with no end in sight) is an apt metaphor for the cloud that seems to be hanging over the shows here, as American designers, media and retailers try to figure out a way forward in an industry that is recalibrating to focus on digital, with cash-rich European luxury brands dominating.

Perhaps looking for a ray of light, several designers have staged shows outdoors, with John Elliott, Pyer Moss, Rodarte and Telfar among them.

At least Phillip Lim was prepared to shield his guests from the rain, as much as was humanly possible on an uncovered rooftop. He furnished rolling racks filled with clear plastic ponchos and plenty of umbrellas. While you waited, there was also hot coffee and cookies on offer to ease the pain!

Luckily, it was more spritz than shower by the time Khalid, Kelly Rowland, Sofia Richie and other guests took their bleacher seats outside. At least Lim had a sense of humor about the whole thing — many of the models came out wearing Paddington Bear-style rain hats, and the finale song was “Here Comes the Rain Again” by the Eurythmics. 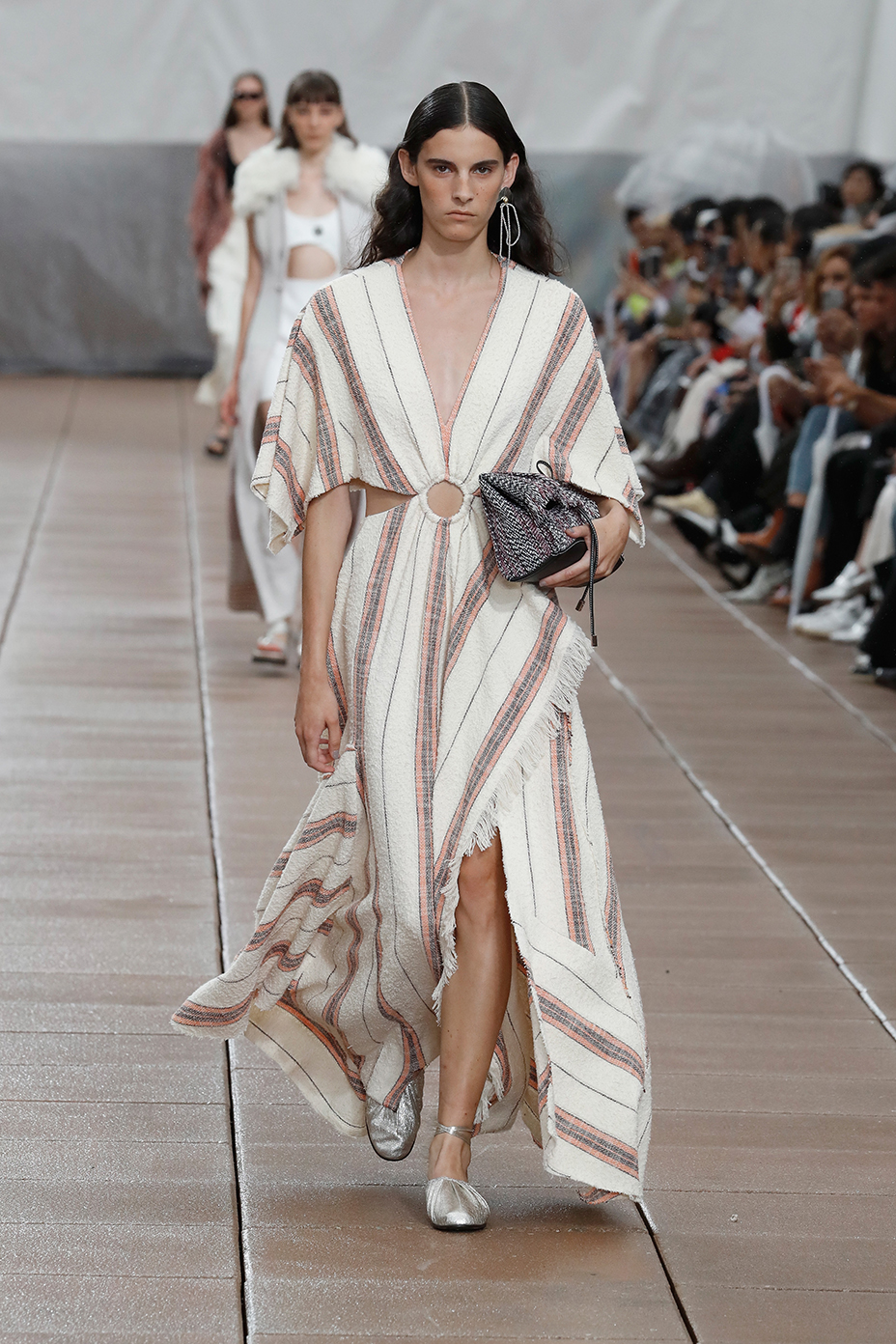 In between was a compelling lineup of versatile, city-chic clothes that made one think about the weather, actually, and how to stay cool, dry and warm in an increasingly unpredictable climate. 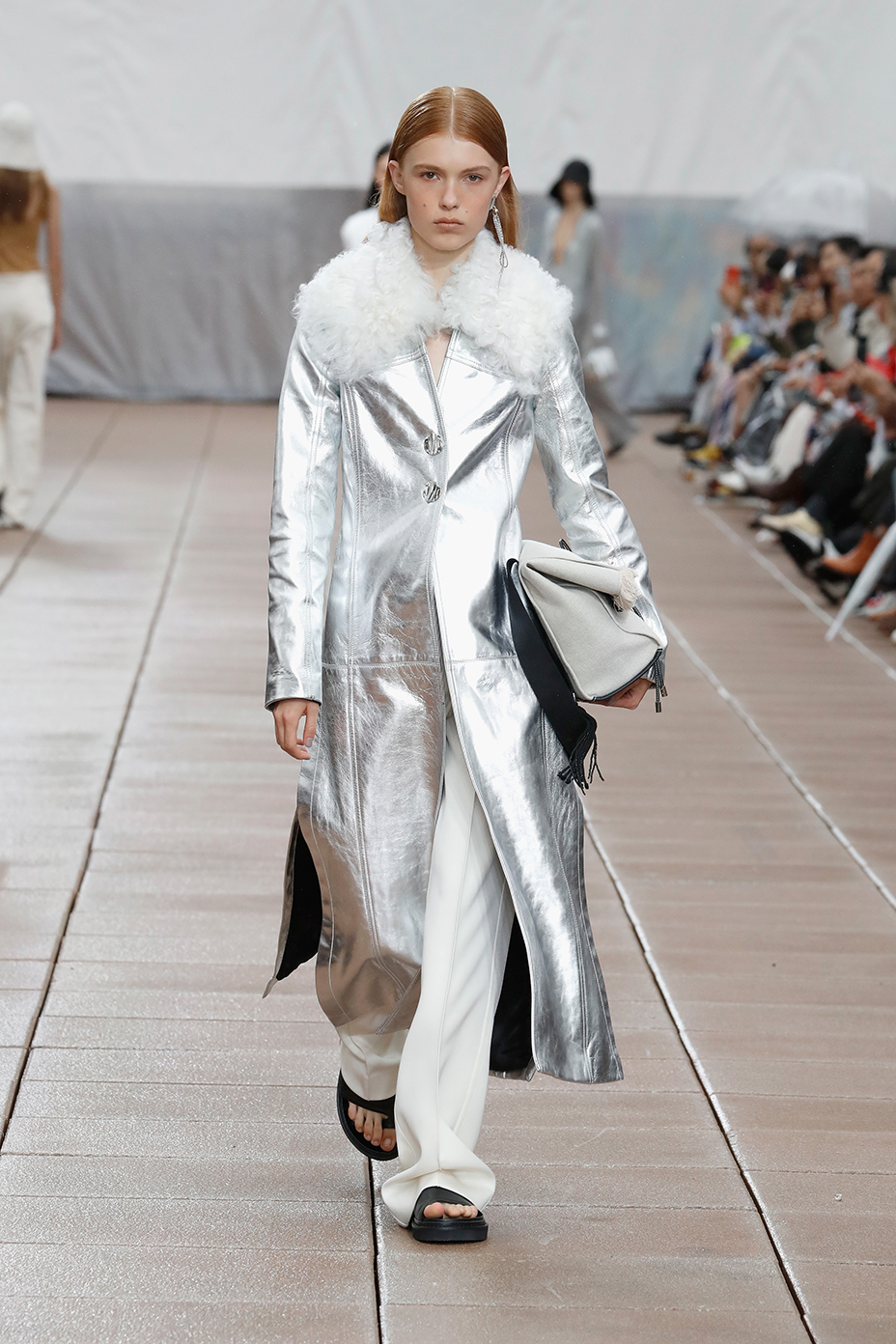 There were lots of seasonless, nomadic-looking layers, including long, lean coats (some with fuzzy shearling collars) worn with fluid trousers, as well as woven dresses in Baja blanket stripe rendered in a caftan silhouette but sexed up for the city with the addition of waist cutouts. (The waist, revealed in keyholes and side slashes is the new erogenous zone, so keep up the crunches!) 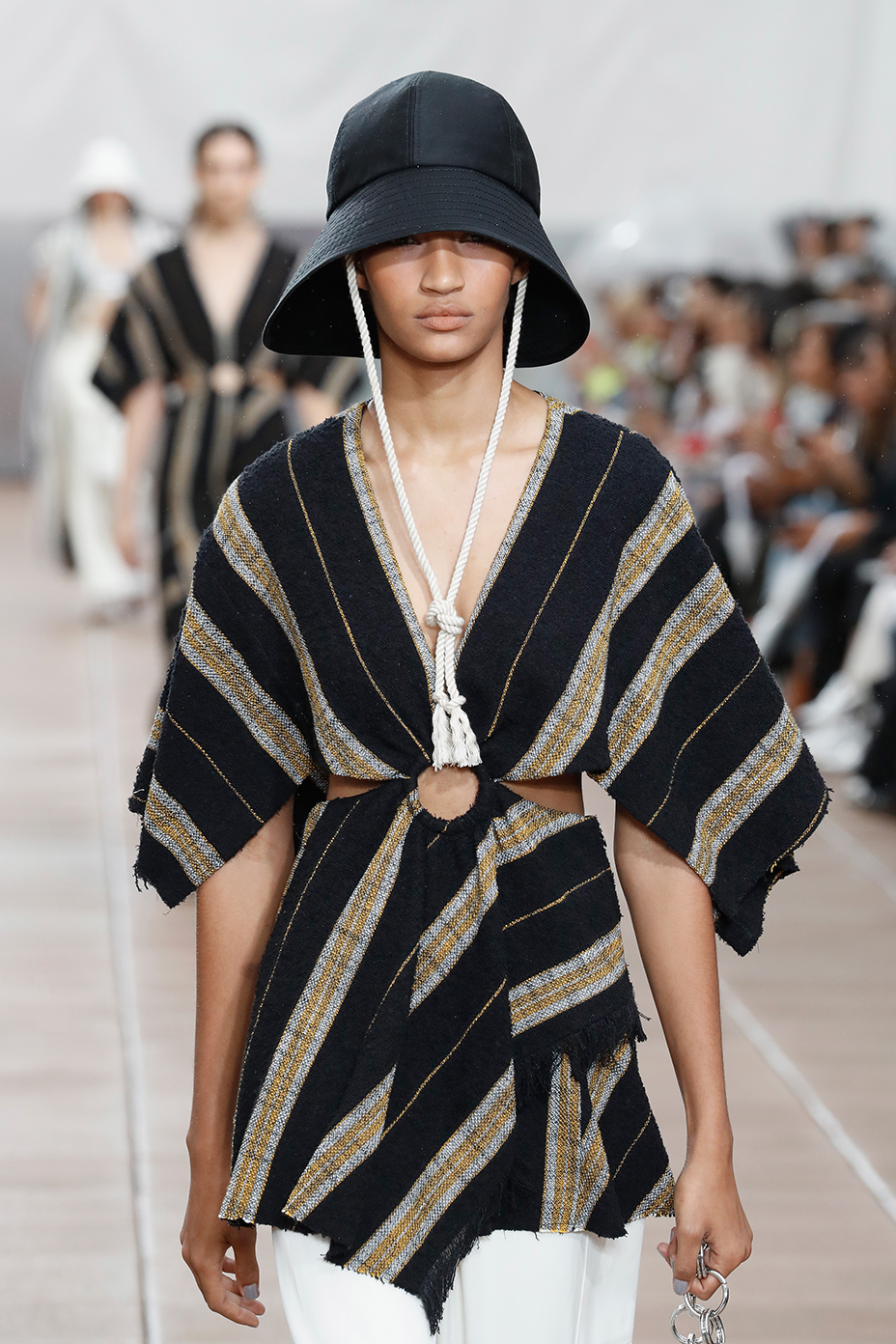 Jack McCollough and Lazaro Hernandez, bringing their Proenza Schouler collection back to New York Fashion Week after two years in Paris, also seemed to have practicality and accessibility in mind. After their sojourn to the capital of haute couture, they zeroed in on denim, the most humble of American fabrics, but gave it a high-fashion, tough-girl spin.

Love-to-hate-it acid-washed denim, the oft-forgotten relic of the ’80s, may actually have a chance at making a comeback in their hands. Primo pieces were ruffled denim apron tops worn over drop-waist skirts with pockets, sure to be on many a front-row girl come spring. 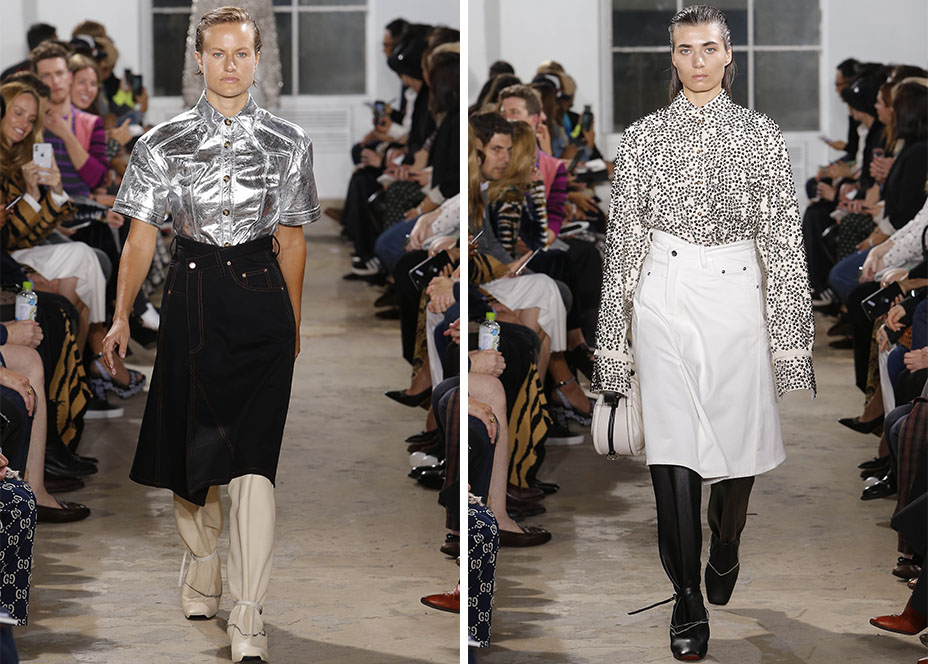 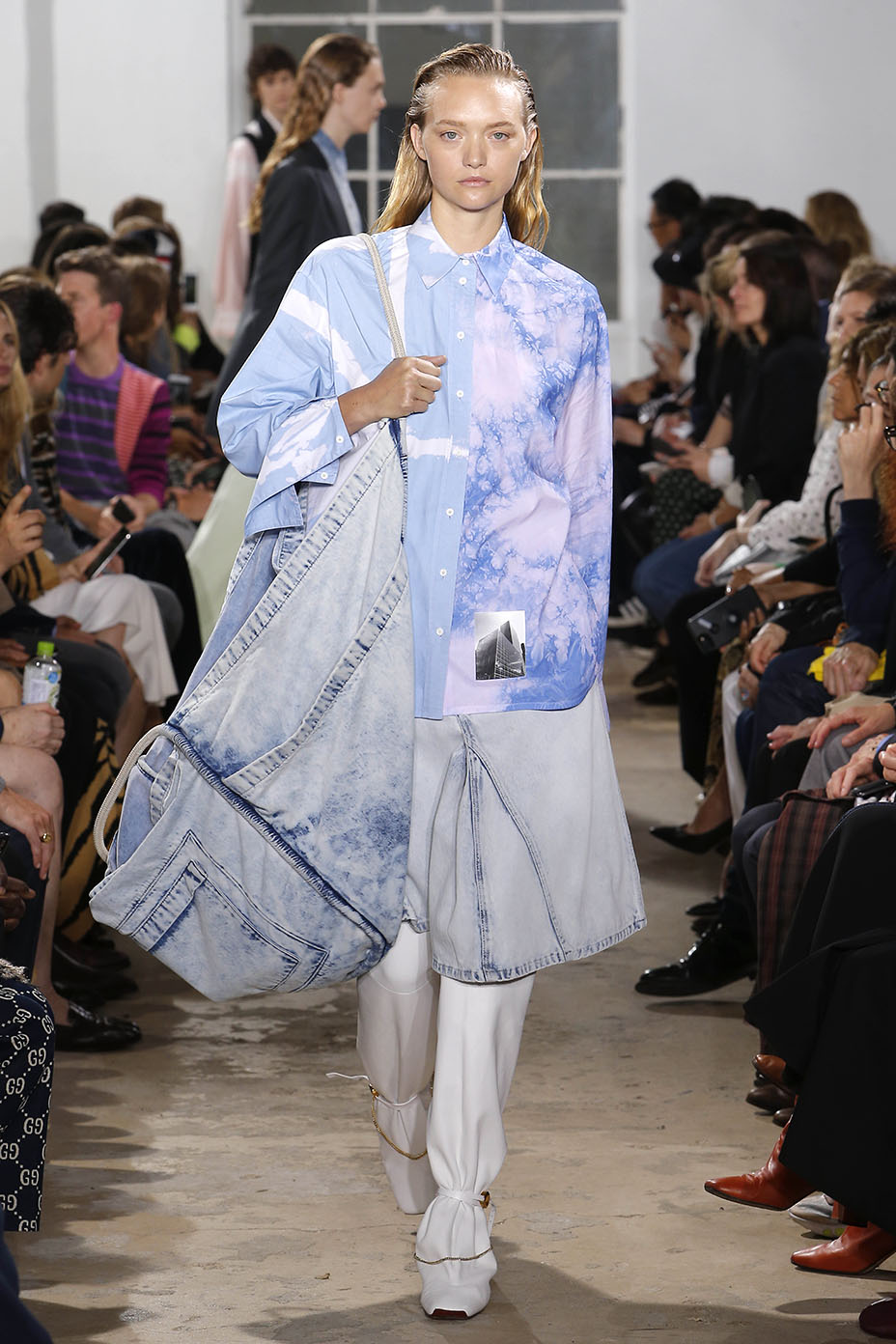 Oversize button-down shirts with screen prints of the skyline, leather vests, full-cut trousers and sturdy trench coats had tomboy attitude. Slouchy boots were cinched in, for the weather perhaps, and denim bags, slung over the models’ arms, were large enough to take down an unfriendly subway neighbor. 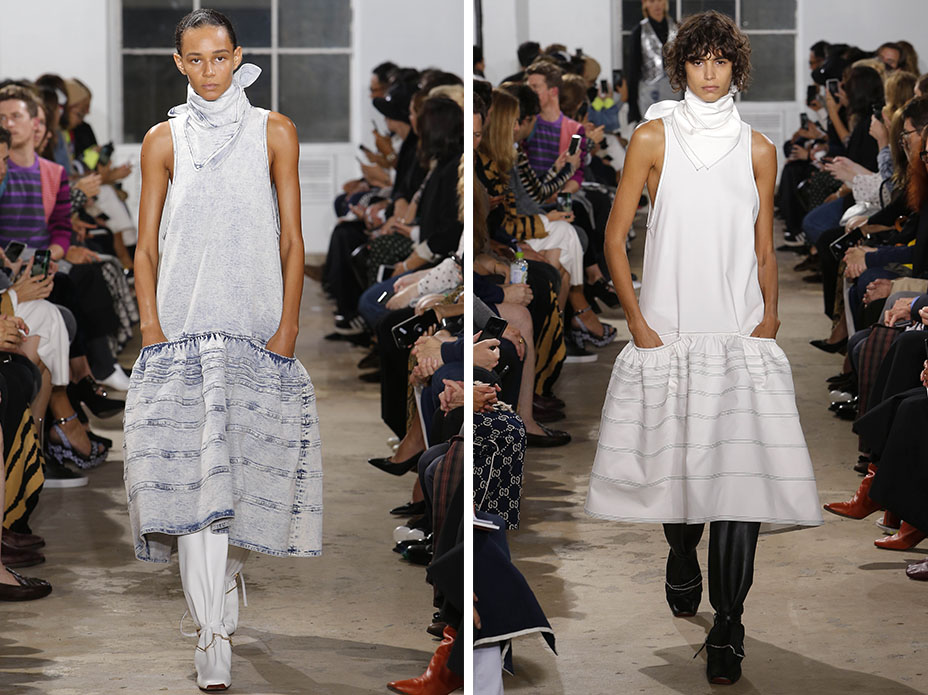 While there wasn’t necessarily a season-defining silhouette here, like the label’s ruffled, cold-shoulder top of 2016, for example, the collection felt like a smart reset, bringing the boys back home to New York where it all began with an eye toward widening their commercial appeal to weather the storm. 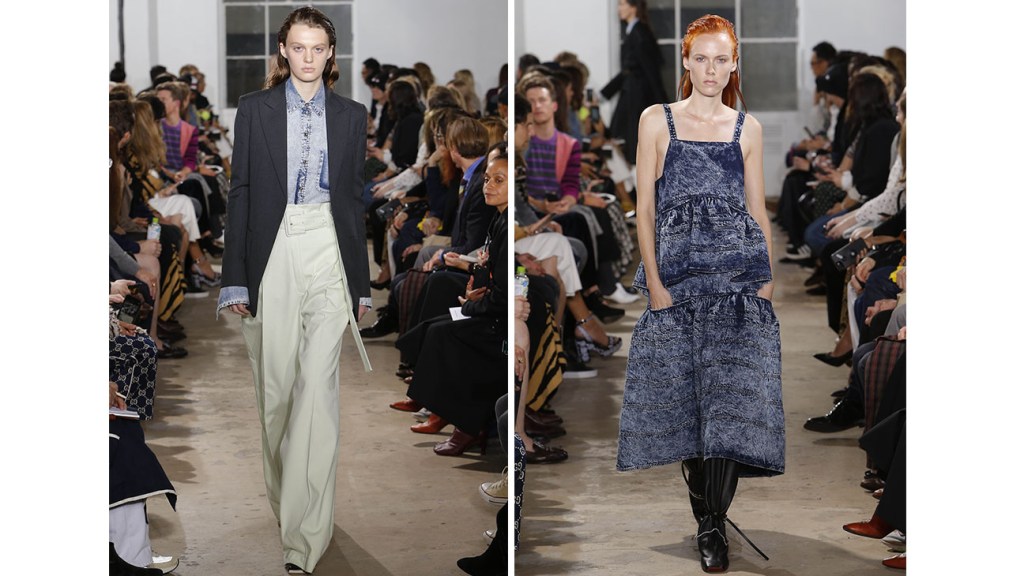 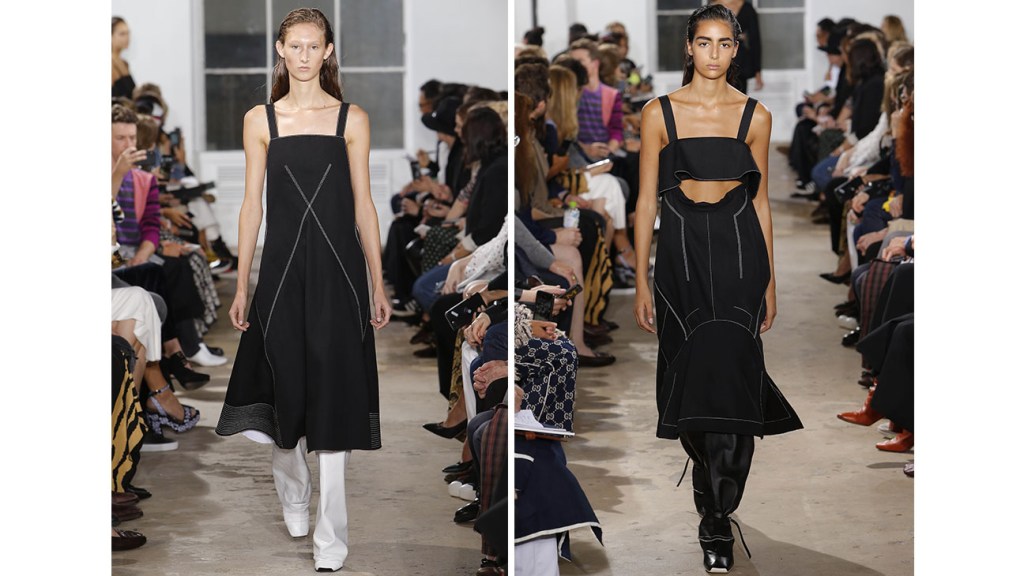