Openly gay Democratic gubernatorial candidate and former Sex and the City phenom Cynthia Nixon came out for Christian Siriano, the wildly popular Project Runway vet who has made inclusiveness the cornerstone of his business. “I love how he designs for everybody,” Nixon said after the Hawaii-themed runway collection. And Siriano returned the favor, modeling an “I’m Voting For Cynthia” T-shirt for his bow. 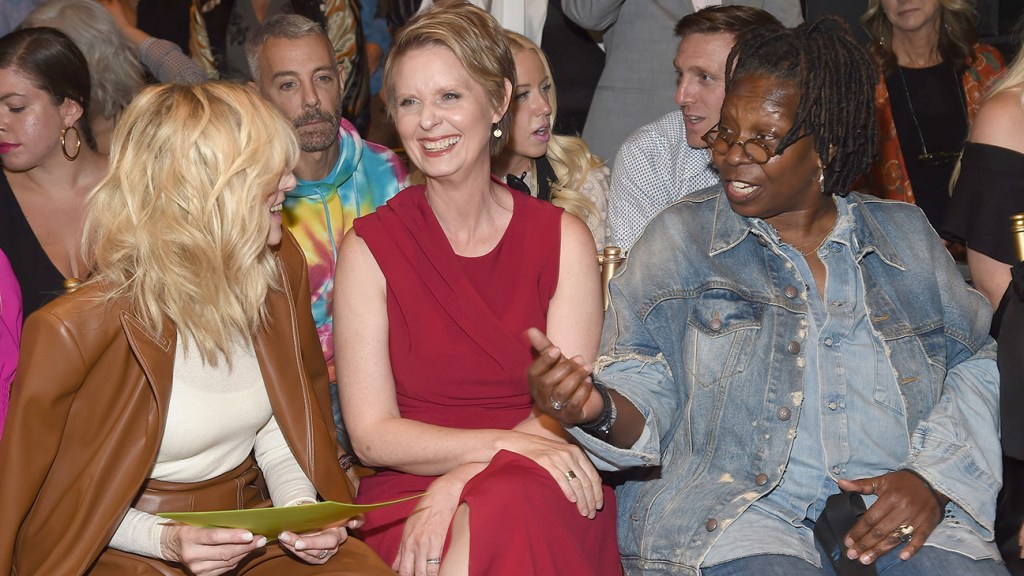 But Kerby Jean-Raymond of up-and-coming New York fashion label Pyer Moss made an even more personal statement, luring the fashion crowd 50 minutes into Brooklyn to the historic neighborhood of Weeksville, home of one of the first free black communities in the U.S., for the best show so far this season.

Gospel finale at @pyermoss in historic Weeksville, one of the first free black communities in the US, was a moment, even in the rain #nyfw pic.twitter.com/Jl1V6L1Oyz

Set outdoors in what is now a cultural center, with a gospel choir 40-strong singing as rain fell softly, the show marked the fifth anniversary of the activist fashion label founded by Jean-Raymond, who, incidentally, dressed Kaepernick for the cover of GQ in a custom shirt listing the names of unarmed victims killed by the police.

After taking on themes of police brutality and racism in previous collections, Jean-Raymond made headlines in June when he dressed Issa Rae for the CFDA Awards in a sparkling blue jumpsuit with a belt reading “Every N— Is A Star.” 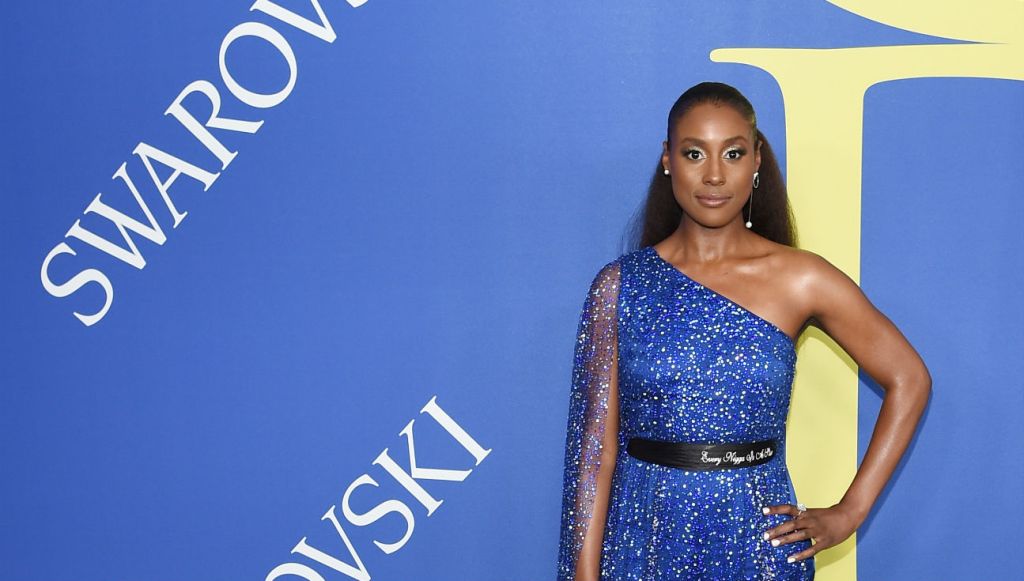 The belt, the designer told me at the time, was inspired by the cultural phenomenon he’s observed of black people often being depicted as tragic figures. “We never talk about who they love, people with their children and their love for their families. It’s always a tragic figure or as firsts — first black man to do this, first black person to do this — but what about just a bus driver?” he says. “We don’t have to be Jay-Z, we don’t have to be Kerby Jean-Raymond, we don’t have to be Issa Rae, we can just be who we are and just exist and we’re still superstars in our own rights, no matter what we do.” 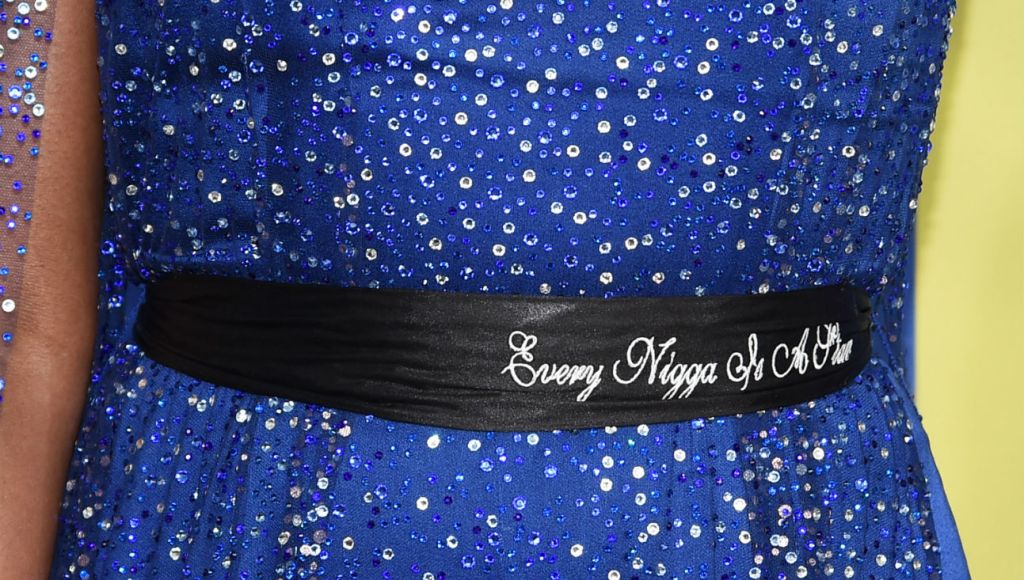 That spirit carried over into the spectacular spring 2019 collection he showed Saturday night. The inspiration was finding beauty in the every day lives of African-Americans. “What does a mundane Saturday look like when we’re just left alone? What is black leisure wear?” the designer explained backstage. 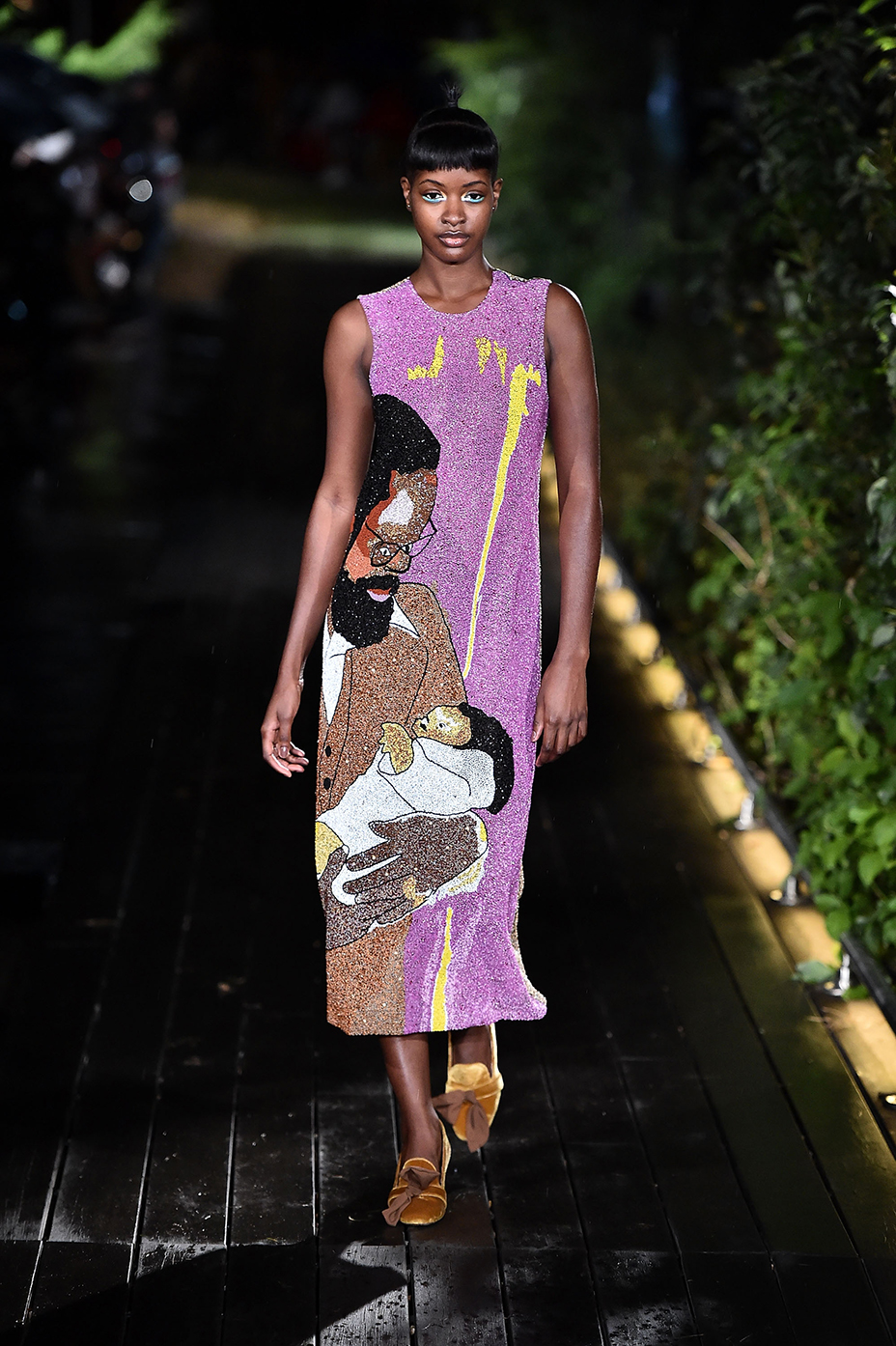 Several things may come to mind, perhaps athletic wear or “urban” wear, as the apparel category came to be known in the dawn of the hip-hop era. But in Jean-Raymond’s hands, it’s something else entirely: lively print dresses ready for a Hollywood Hills pool party, sharp suits made for peacocking, and the kind of single-sleeve sunshine yellow dress that could light up any room. 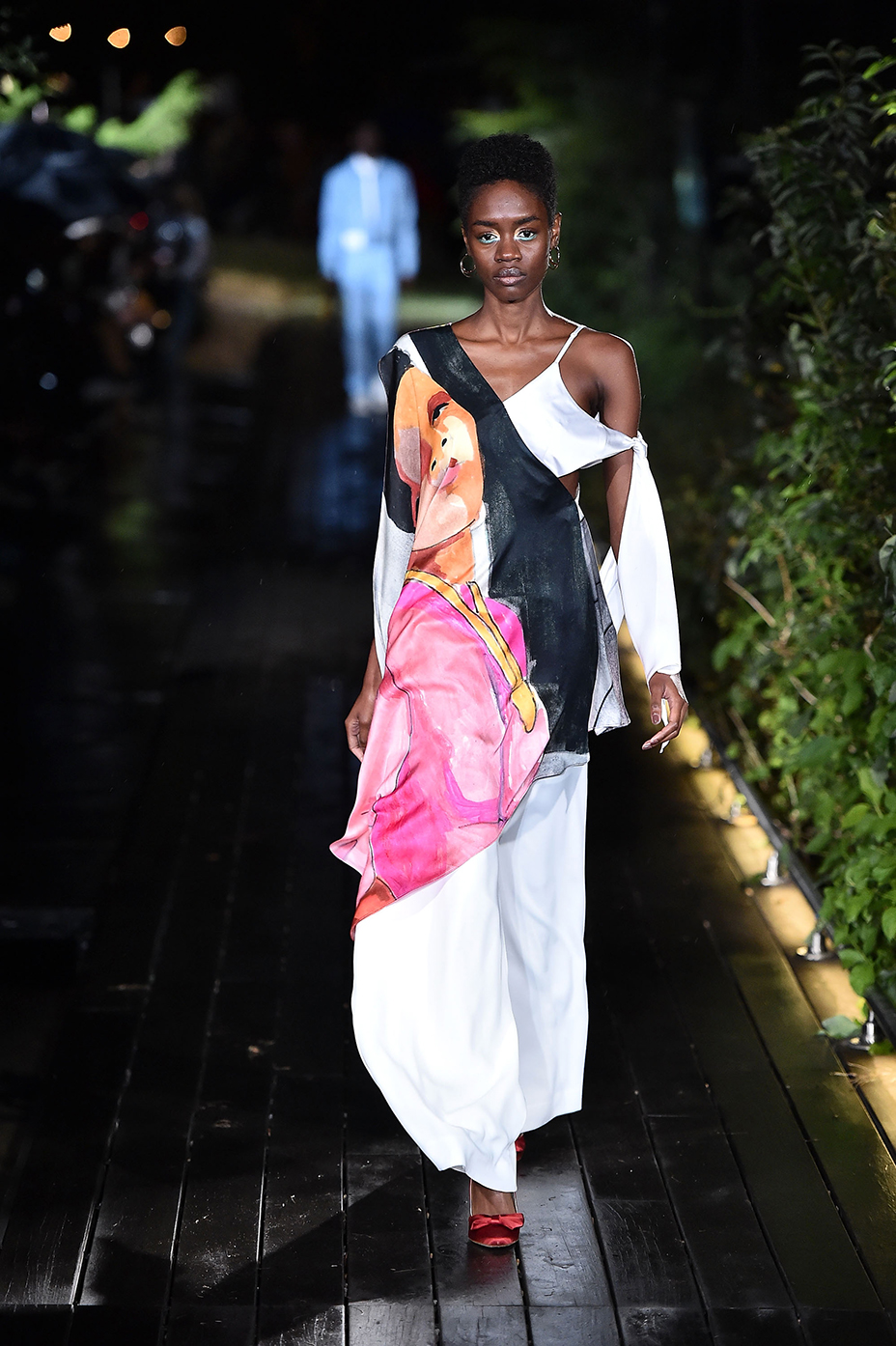 The designer said backstage that his creative spark came from researching the Negro Motorist Green Book, a Jim Crow-era publication that “showed black people how to stay safe while traveling in segregated America.”

He found a New York painter, Derrick Adams, had done an exhibition inspired by the book, and asked him to collaborate on 10 new works depicting African-American people enjoying life — barbecuing, laughing with friends and children — used on a printed men’s Aloha shirt and pants set, women’s accordion-pleat skirt and dazzling gown embellished with 200,000 beads that seems destined for a red carpet. 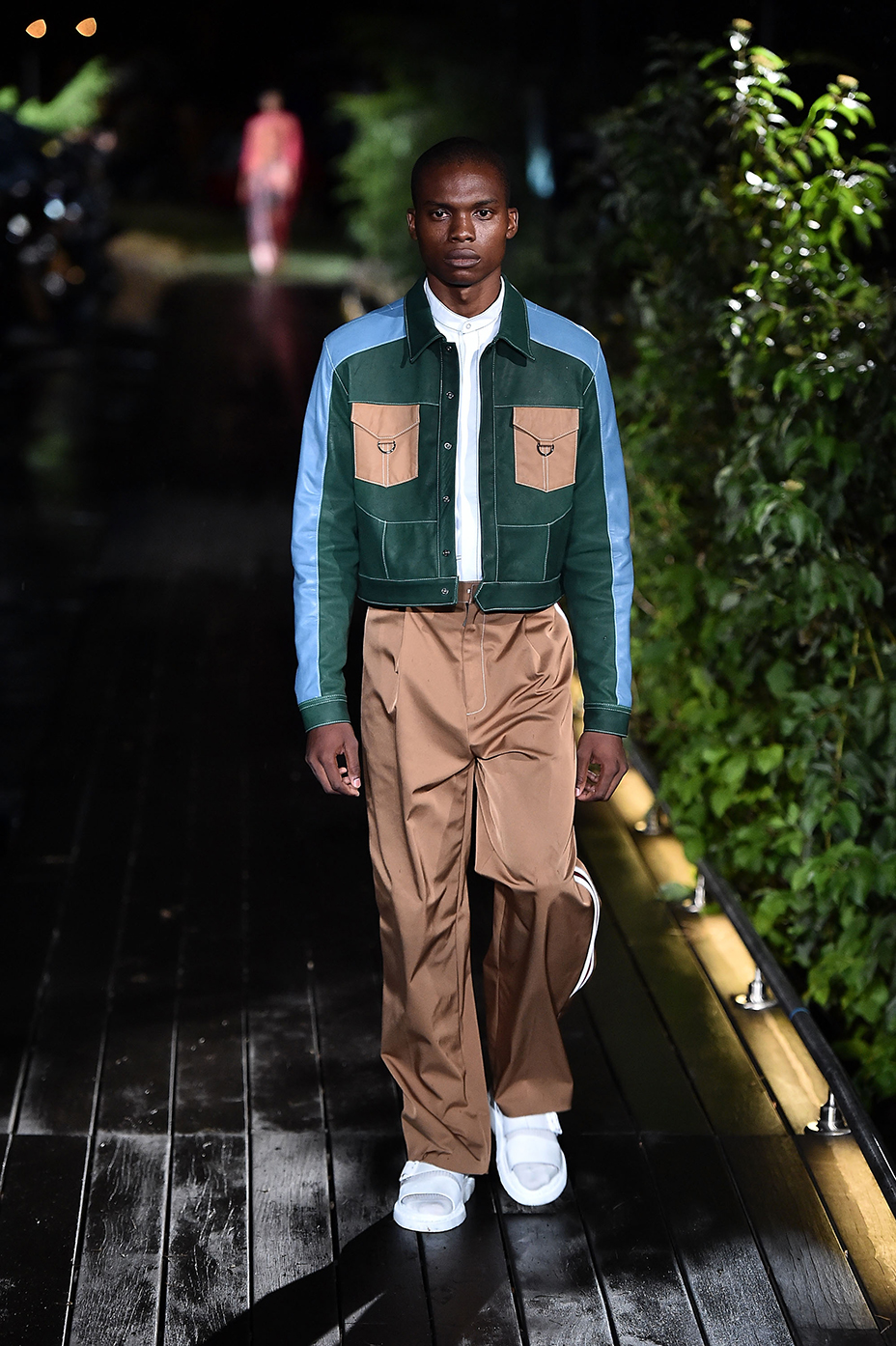 The designer already has collaborated with Reebok and on Saturday debuted a new partnership with FUBU, Daymond John’s pioneering ’90s-era label. “Part of what I want to do is highlight American designers who have not been considered designers because they are urban. FUBU was doing $200 million a year, similar to Donna Karan,” Jean-Raymond said of FUBU, whose logo was splashed across a cropped, sleeveless jacket. 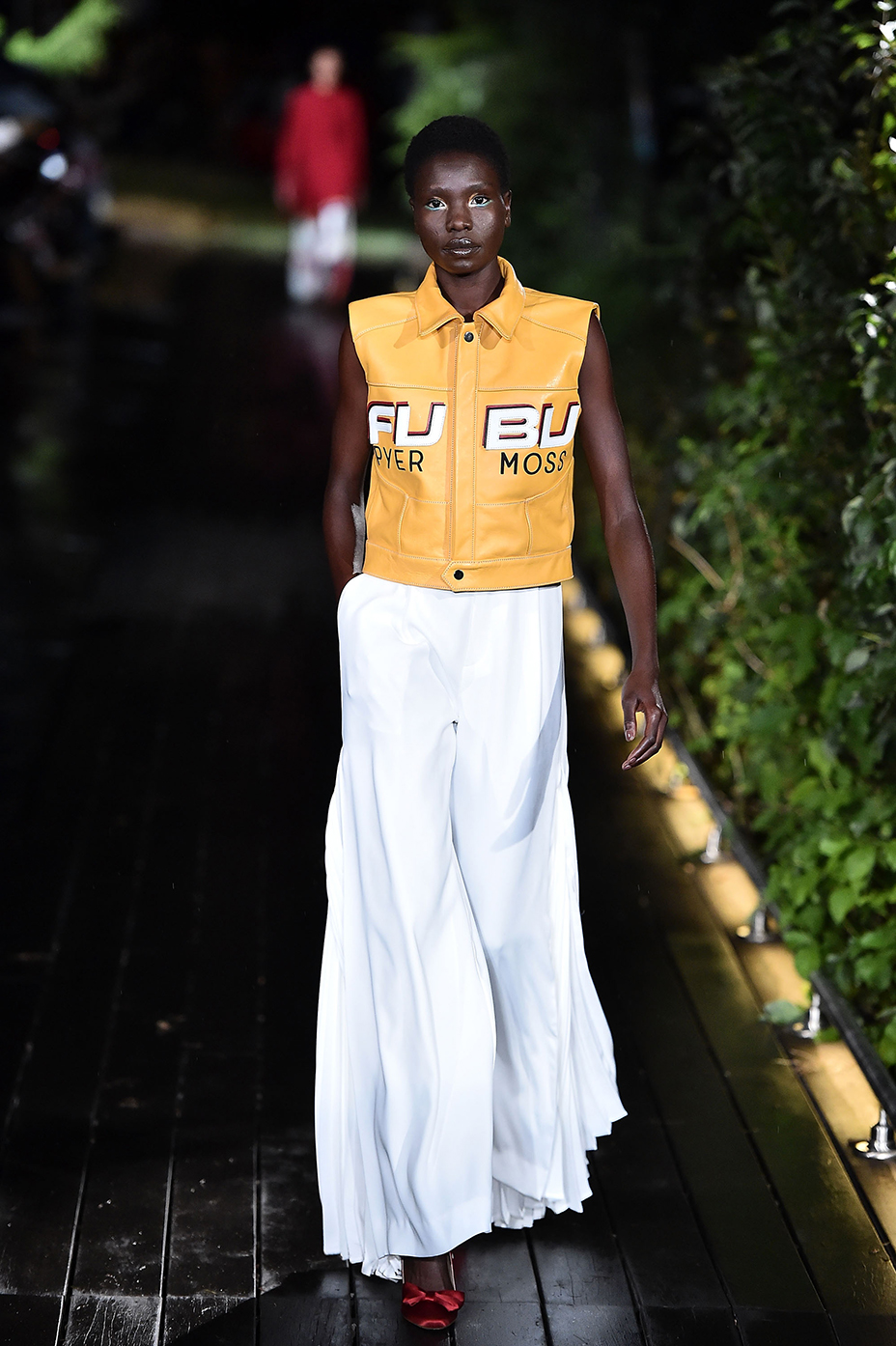 In a time when hope is hard to find much anywhere and New York Fashion Week seems to have lost some of its luster, Jean-Raymond’s Pyer Moss is a lodestar, to use a timely word.

“I’d love to have a business like Alexander Wang’s,” the CFDA Vogue Fashion Fund finalist offered when asked about his ambitions. “I grew up about five minutes away from here, and it was always my dream to bring it back, but I never felt like I was big enough and had the pull.” Until now. 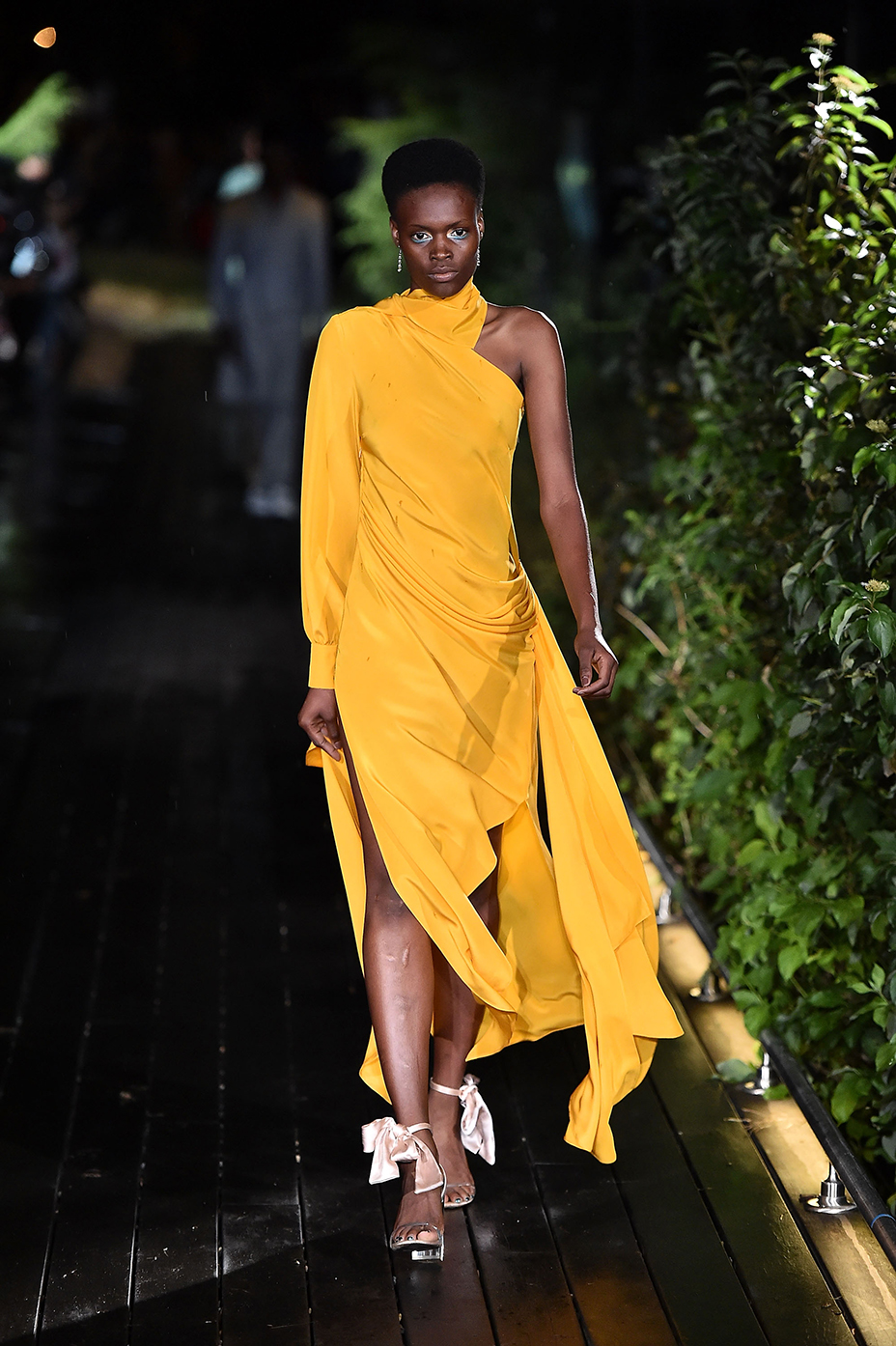