Nothing against Paris and Nicky Hilton, they are both very nice girls, but I thought the much-ballyhooed debut of the new Oscar de la Renta at New York Fashion Week on Monday would have drawn higher-wattage stars to the front row, considering those who have worn the label over the years, from Sarah Jessica Parker to Blake Lively.

Then again, the new Oscar could be reaching back to its society roots. Like Ivanka Trump, who wore Oscar de la Renta during her father’s presidential inauguration weekend, the Hilton sisters are next gen New York socialites. Moms Kathy Hilton and Ivana Trump wore Oscar in the 1980s, when another Republican was in the White House and Donald Trump was gobbling up real estate in New York City. Why shouldn’t their daughters wear it now? 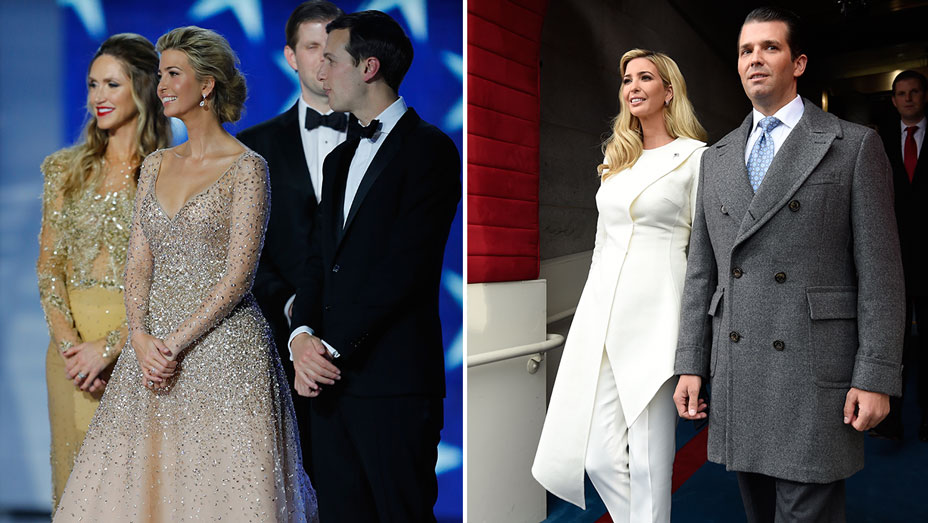 Of course, Oscar isn’t designed by Oscar anymore. The designer died in 2014, and there’s been another name in the interim. But the house was recently taken over (or taken back) by Laura Kim and Fernando Garcia, designers who had previously worked there. Got all that? It’s like a Dynasty episode, and we haven’t even gotten to the lawsuit yet.

On Monday evening, the new Oscar debuted to a room that also included former Hillary Clinton vice campaign manager Huma Abedin, who made a rare post-election public appearance. With stadium seating, a black-and-white floor and a dramatic silver curtain, the stage was set. But out first was Monse, the buzzy collection the two designers started themselves in 2015. Apparently, Kim and Garcia told their bosses at Oscar, you can’t have one without the other.

Best known for helping to popularize the cold-shoulder trend, Monse has also been worn by a slew of actual high-wattage celebs, including Westworld’s Thandie Newton, who went with a white off-the-shoulder gown licked with orange flame sequins for the 2017 Golden Globes. 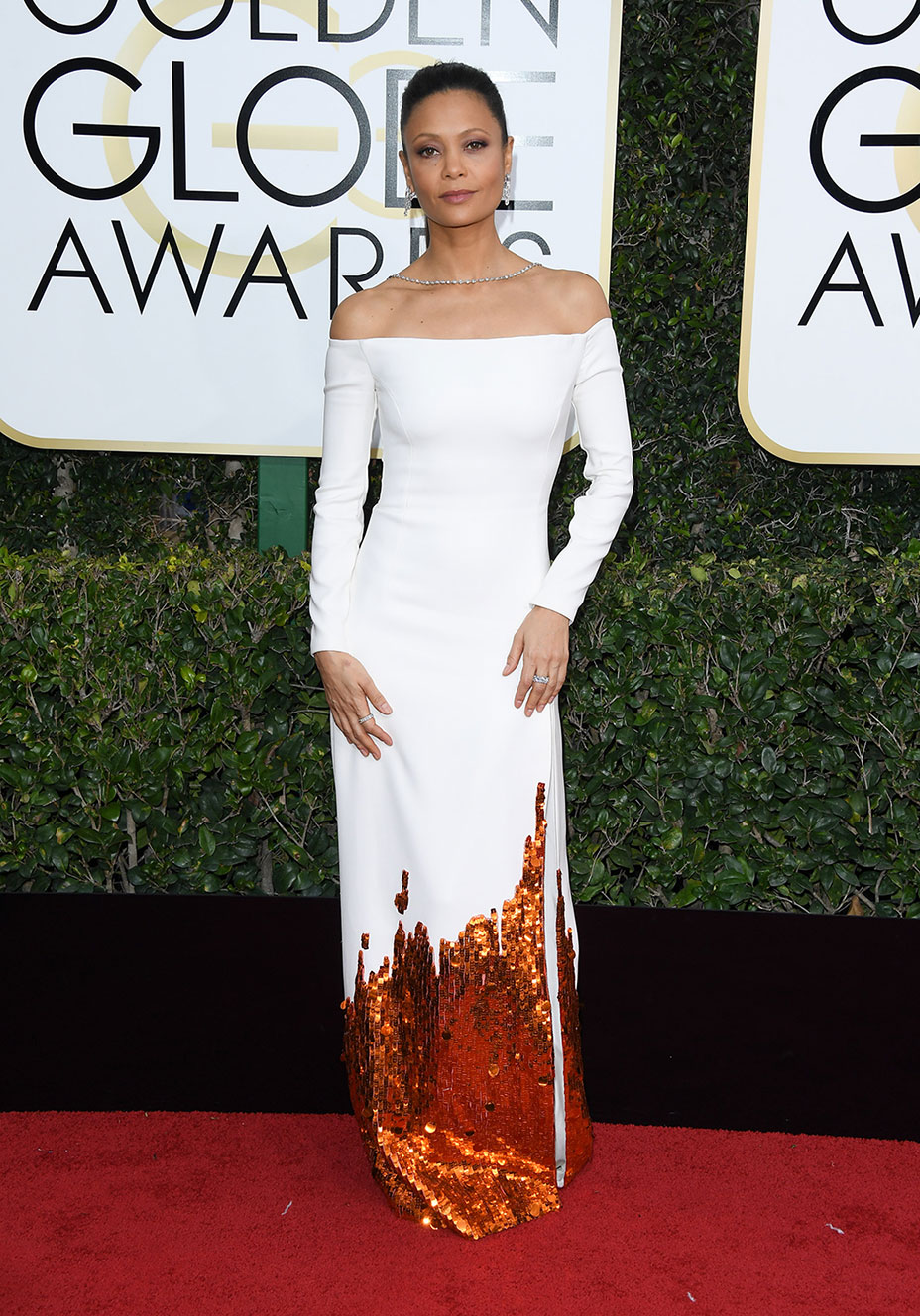 The designers played with shoulders and sequins on the runway here, too. Several tops and gowns had a paint drip sequin embroidery effect. They also flirted with deconstruction on ruffled cold-shoulder, button-down shirts, some too overly tricked out, worn with tuxedo pants. More successful was a sharp-looking off-shoulder herringbone blazer and coat dress. Draped velvet pieces, including a sunshine yellow top knotted at the hip over pants were casual but elegant. 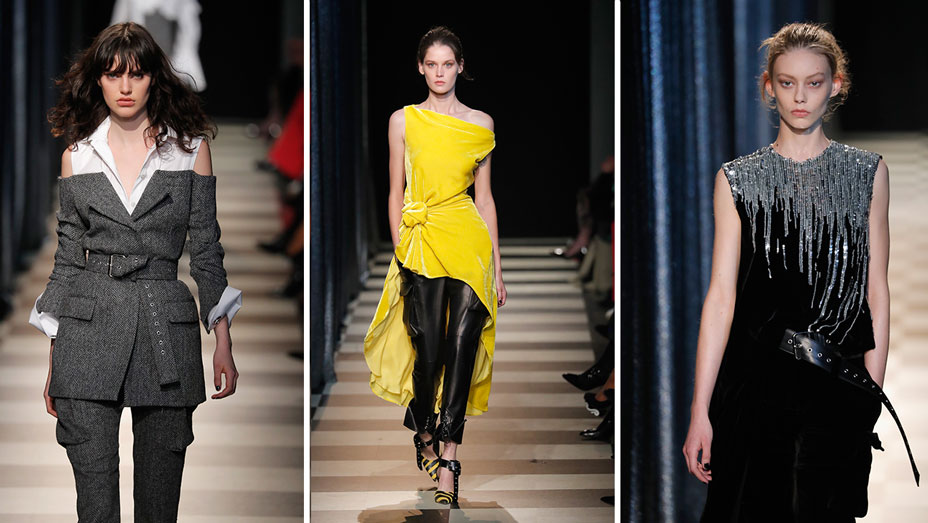 Onto the Oscar side of the design equation; streamlined silhouettes and a vivid color palette tied the collections together, but this one seemed grander and a little bit more grown up. Gowns had details both saucy and sweet. (A black-and-white fox fur skirt; embroidered flower tendrils.) But even more impressive were the creative takes on dressing up, which starlets and socialites alike should appreciate.

A sorbet pink suit worn with a silver sequin corset was a modern alternative to gown, as was a liquid silver velvet draped top, worn over black pants. All said, both collections were a bit uneven, not to mention the presentation itself, which was fraught with a malfunctioning curtain and a questionable seating arrangement that had Cristina Ehrlich, one of Hollywood’s top celebrity stylists, straining to see. Still, it was enough to whet the appetite for more. 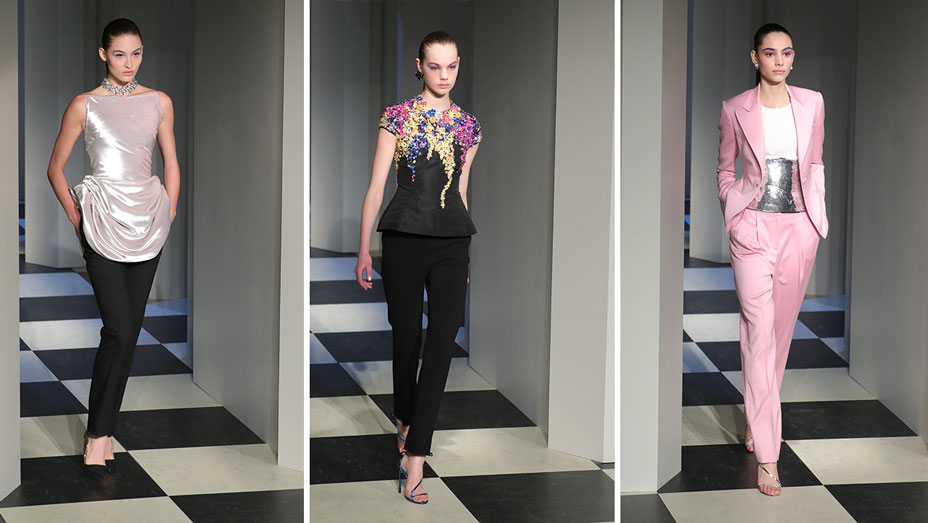 Oscar’s gain was Carolina Herrera’s loss. The other high society fashion pillar of New York Fashion Week (and Ivanka Trump go-to), Herrera had Kim and Garcia designing for her brand before they skipped out, resulting in a breach-of-contract lawsuit that was only just settled in January. 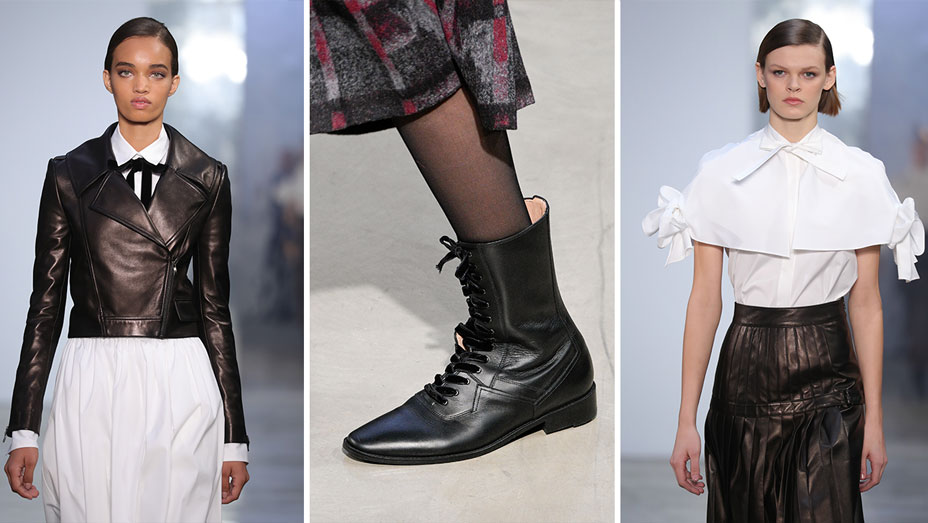 Perhaps to reset after all the Page Six fodder, on the runway, Herrera returned to her roots, meaning her own personal style. She showed several versions of her signature white shirt, all of them a bit puritanical looking, even when paired with an au courant black leather pleated skirt, moto jacket, or the footwear of choice for next season, the flat work boot. The evening wear wasn’t that transporting either; the best look was a midnight blue sequin gown with a crisscross detail in front and a ruffled collar. “Calm elegance,” was the inspiration in show notes. A little too calm? 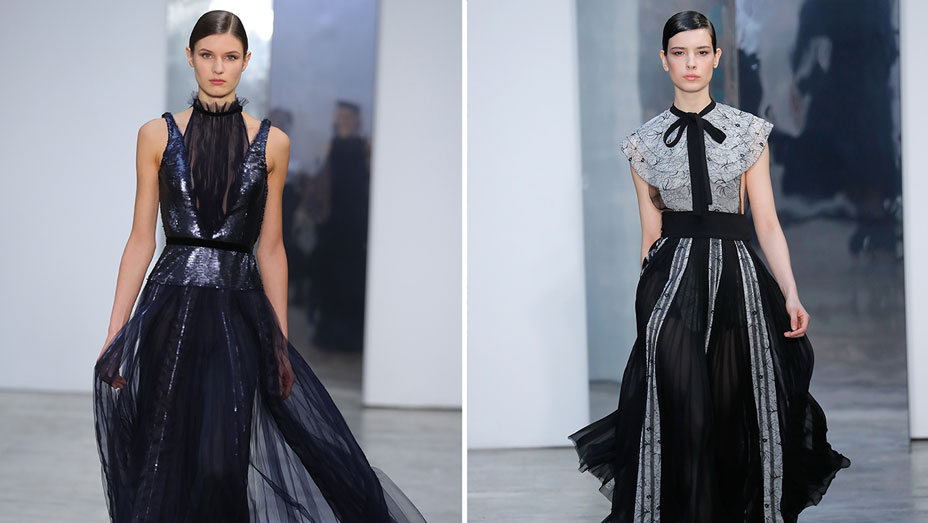 The day’s bittersweet highlight was Proenza Schouler, the label launched in 2002 by Jack McCollough and Lazaro Hernandez, two of American fashion’s most singular talents, who will be skipping out on New York altogether after this season. Starting in July, they will begin showing in Paris during the haute couture shows, to more closely align to the retail schedule. Rodarte designers Kate and Laura Mulleavy are also decamping to Paris. 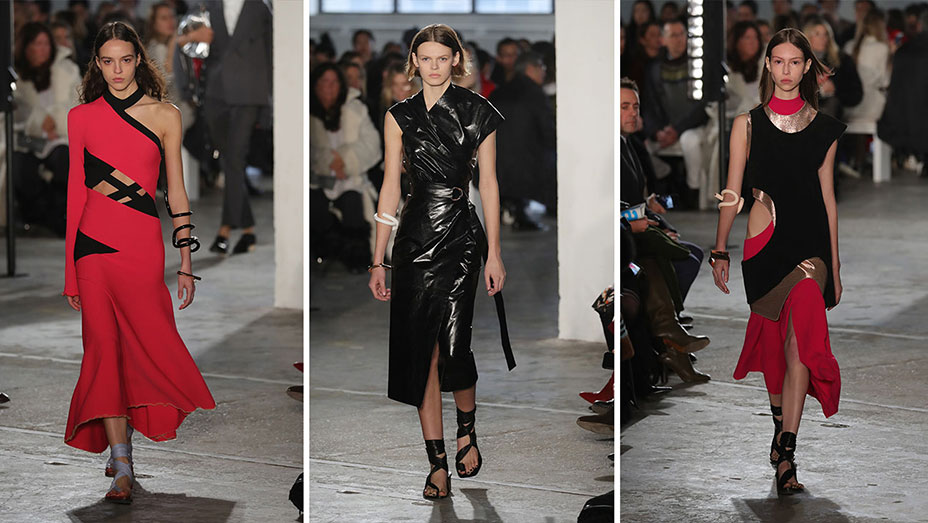 But before McCollough and Hernandez go, they showed one of the best collections of the fall season so far, full of racy, color-blocked, cutout dresses; squiggly art-to-wear tops and boxy outerwear with off-kilter details, down to the barely discernable “Proenza Schouler” written on utility straps. 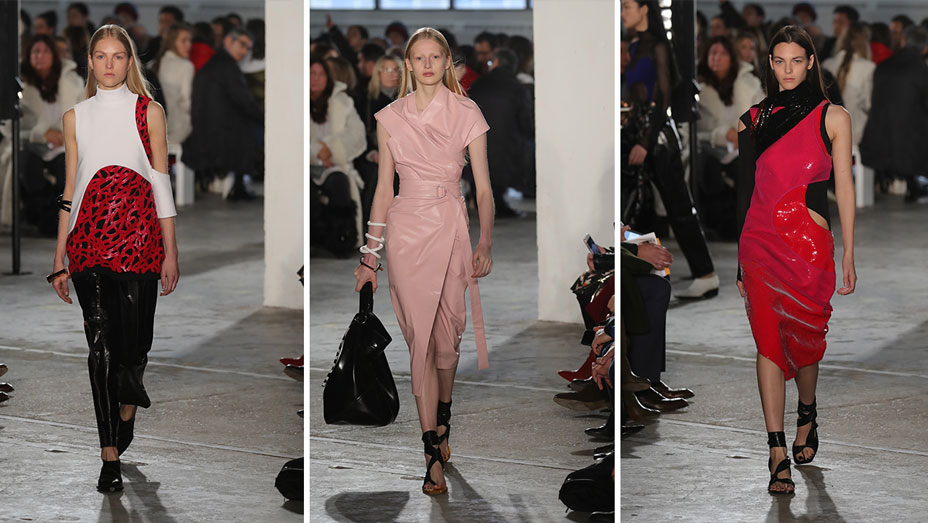 There were things that shouldn’t work together but did, bringing to mind that only-in-New York funky style (silver pants and a matching silver bag, for example, and cowboy shoe boots). There was edgy sportswear and there were paint splatter and squiggle details that seemed to be a love letter to the downtown galleries and streets in the city they are leaving. 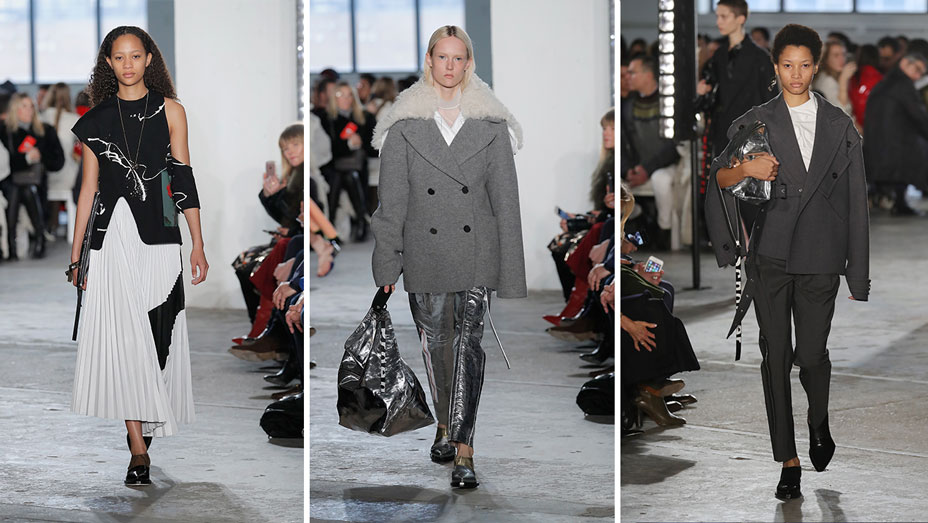 Each piece had something extra, something special, something surprising. It’s not as easy as it sounds. And it will be missed. 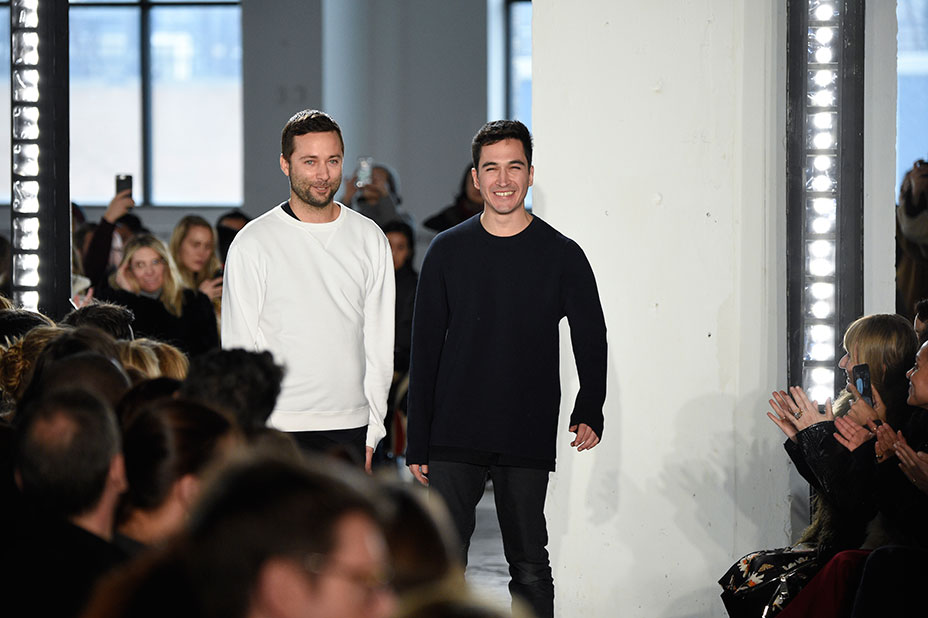