The celebrity dresser, who counts Issa Rae, Rita Ora, Ciara, Ezra Miller and Odell Beckham Jr. among his clientele, told The Hollywood Reporter that he was “super-happy” to make his debut as a designer. “You know, my peers, my agents and the PR companies I work with daily have been so supportive,” the native New Yorker said. “It’s an amazing feeling, I feel so loved and protected.”

He then took a moment to speak about some of the key pieces in the collection, starting with the short version of the black beaded-bodice Critics’ Choice gown for Rae that was the first red carpet piece he showed to unveil his new line. Of the item, reinterpreted in black wool crepe instead of the original double-faced silk, Rembert said, “The silk is definitely more red carpet, but the double-face wool you can wear during the day.”

For the last few years I fought myself on what’s next in my career. Questioned if it should be a clothing line…If it should be men’s or women’s…is it time? in 2018 I told myself that it was time and that it will be a line and that I wanted it to be women’s. I’m inspired by Women! Strong Women! Intelligent Women! Beautiful Women! As I furthered in my thought, I realized that the two Women that inspired me most in life were my Mother Louisanne Aliétte (May she sleep in peace), and I’m also inspired by the Woman that my Daughter Harper Aliétte will one day become. Today I was blessed to have an amazing woman who inspires me daily @issarae debut my collection @alietteny Thank you!

Another look he pointed out was a splashy floral print that seemed to sum up the theme of the entire collection, titled Medinina (meaning “Isle of Flowers” and referencing his family’s native Martinique). On second glance, the finely pleated dress turned out to be paper-fine leather.

“I partnered with a designer named Georgia Gardner Gray and she’s based out of Berlin. I DM’d her on Instagram and said, ‘Hey, I’d love to partner with you,’ and she was like, ‘I’ve never done this,’ and I said, ‘Let’s do it,’” Rembert told THR. “It was over Christmas break and no one works over the break, but Georgia is amazing at what she does and she worked over Christmas to do the print. Then we got the leather and I wanted to make the clothing so soft and delicate that you wouldn’t think it was leather.”

Another print running throughout the collection — a graphic black-and-white line drawing featuring a woman’s profile with a nose that “was a bit fuller, a bit rounder” — specifically reflects the face of black women “and shows the beauty of who they are,” he explained.

Many of Rembert’s looks were punctuated with a double-buckle belt that the designer said gives the collection a bit of an edge and appeal to younger, as well as more mature, women. 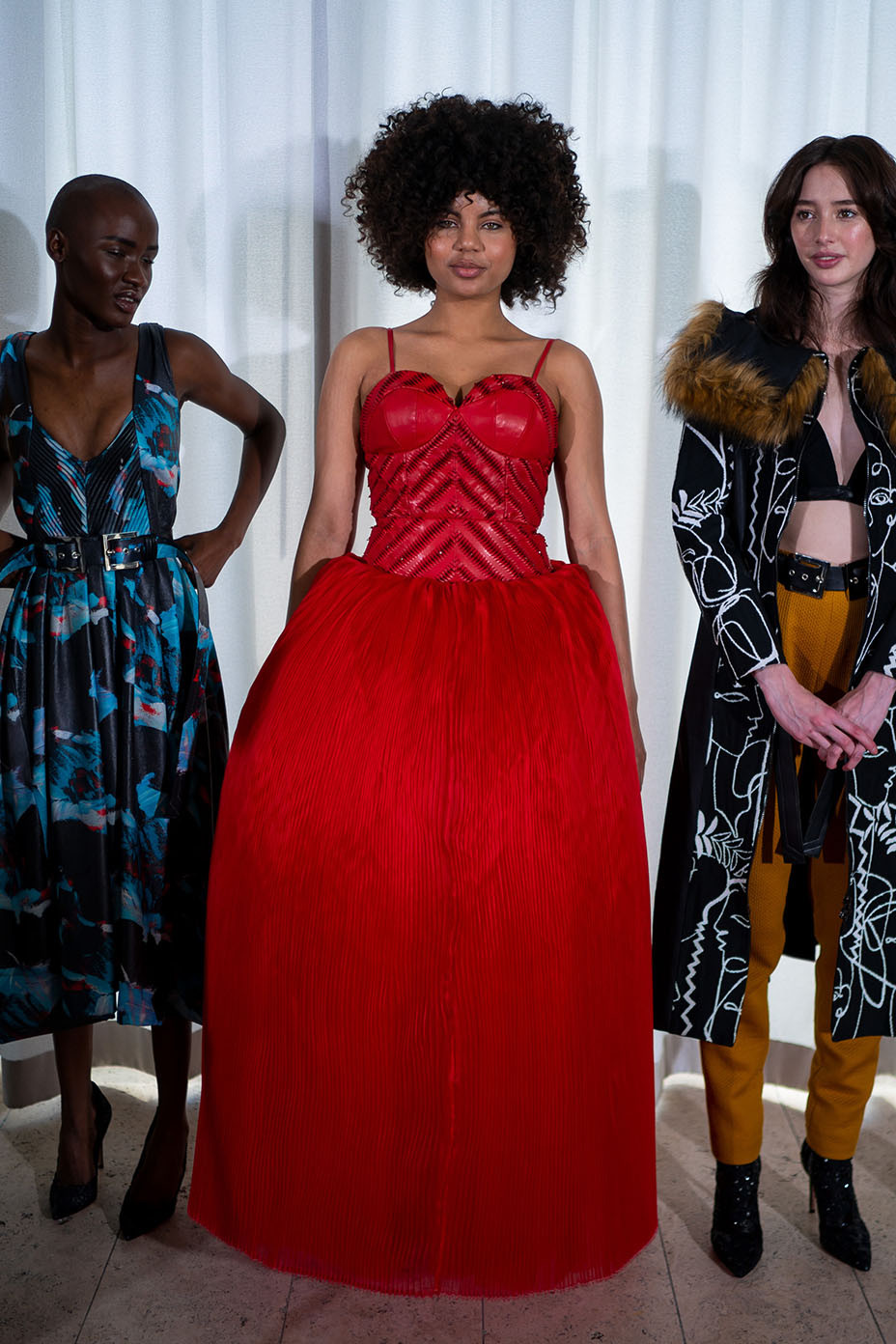 While a show-stopping coral gown with a laser-cut leather, hand-beaded top and a finely pleated bell skirt looked like a prime contender for the Oscars, Rembert stayed mum on any plans, although he said that planned to board a plane on Thursday for a magazine cover shoot in Los Angeles — so who knows what else might be in his luggage?