With summer in full swing, a chic hat is an essential accessory for both mastering SoCal style and providing sun protection. Luckily for Angelenos, there is a new hatmaker in town bringing with her some A-list credibility and many of the season’s top trends.

Teressa Foglia, whose custom styles have been seen on Catherine Zeta-Jones, Keri Russell and Twilight’s Nikki Reed, just opened her first West Coast outpost at the Malibu Village shopping complex, joining other recent retail additions Fred Segal and Catch Surf. While her original shop location is Industry City in Brooklyn, her new flagship location serves as both a retail store and a studio space, where she creates bespoke pieces for her growing clientele of starry fans, who also include Aladdin’s Mena Massoud, Sports Illustrated model Hannah Ferguson, actress Jamie Chung, and actor Gerard Butler and his girlfriend Morgan Brown.

Butler, who reprises his role as Secret Service agent Mike Banning this summer in Angel Has Fallen, tried on countless styles with Brown, and then the couple designed their own pieces and ended up walking out with eight different hats. 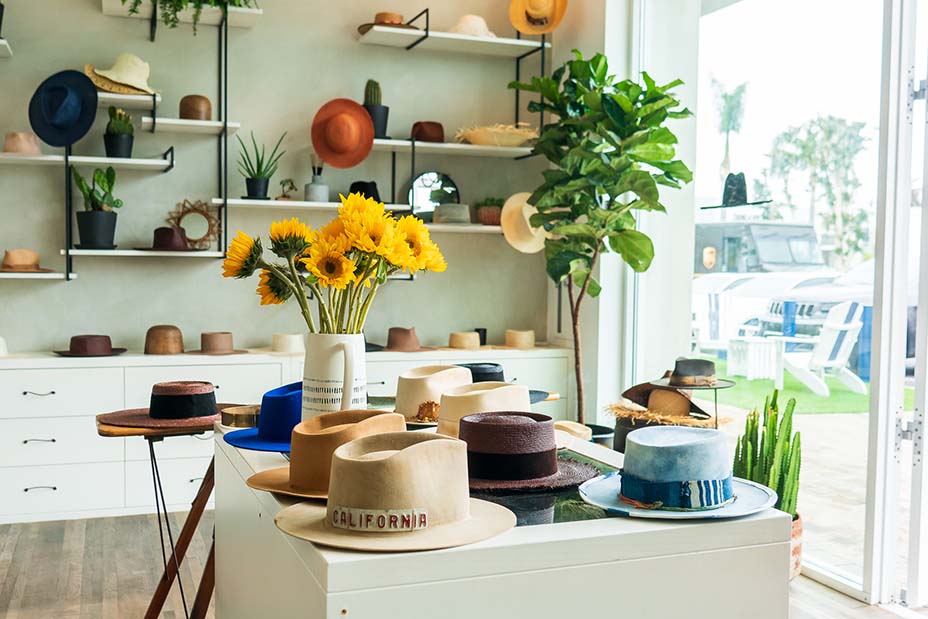 As for the latest trends, the designer says that straw bucket hats and nautical-inspired toppers are popular, while also noting: “This summer, the trend is definitely continuing towards unisex styles that can be worn by both men and women. But glamour and oversized straw are also big this season, like our Eclipse hat, which comes in color-blocked black and white handwoven Panama straw and was inspired by 1950s Hollywood starlets like Grace Kelly and Marilyn Monroe.”

Foglia joins a growing list of designers who are turning Los Angeles into the hotbed of hatmaking. Pharrell and Lady Gaga favorite Nick Fouquet recently relocated his workshop/store to Abbot Kinney Boulevard in Venice, while Janessa Leone’s pared-back styles continue to be spotted on everyone from Chrissy Teigen to Olivia Wilde and Jessica Alba. Gladys Tamez, Lovelybird and Meshika by Alberto Hernandez round out the list of modern-day milliners who are drawn to the Los Angeles area and its relaxed, beachy style. A strong appreciation for handmade products, combined with the need for daily sunshine protection, has also contributed to the growth in the hatmaking community.

Foglia got her start in Brooklyn, but draws inspiration from her travels around the globe, so the expansion to L.A. was a natural progression. “I lived in Southern California for about seven years and it still feels like home for me,” says the East Coast-born designer. “After sending more hats to California than anywhere else, it made sense to create a home here.” 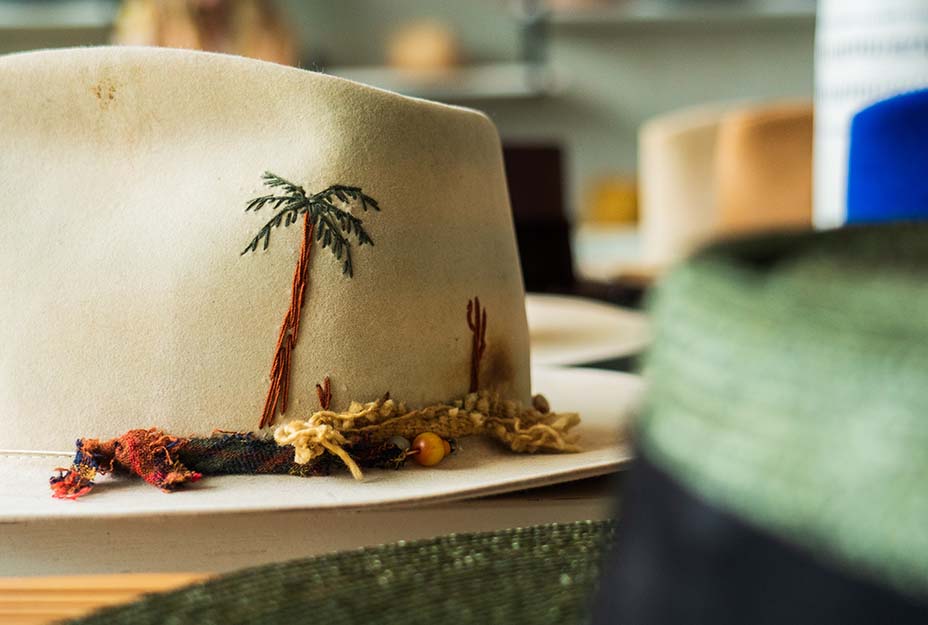 The bright and airy West Coast retail flagship was also designed to be a functional studio where clients and potential customers can interact with the daily development of the product and create their own custom hat. Each hat is entirely unique, handmade from high-quality, sustainably sourced furs, felts and straws. Many are finished with one-off vintage silks found on her flea market sourcing trips and then hand-embroidered or painted on-site with one-of-a-kind details, often by her creative partner, artist Tyler Hays Wild.

“It’s really fun to be making and creating within the space,” she says. “Every day we are developing a new set of designs in the open, and we love that we’re already seeing a community of people stop by daily to see what is new.” 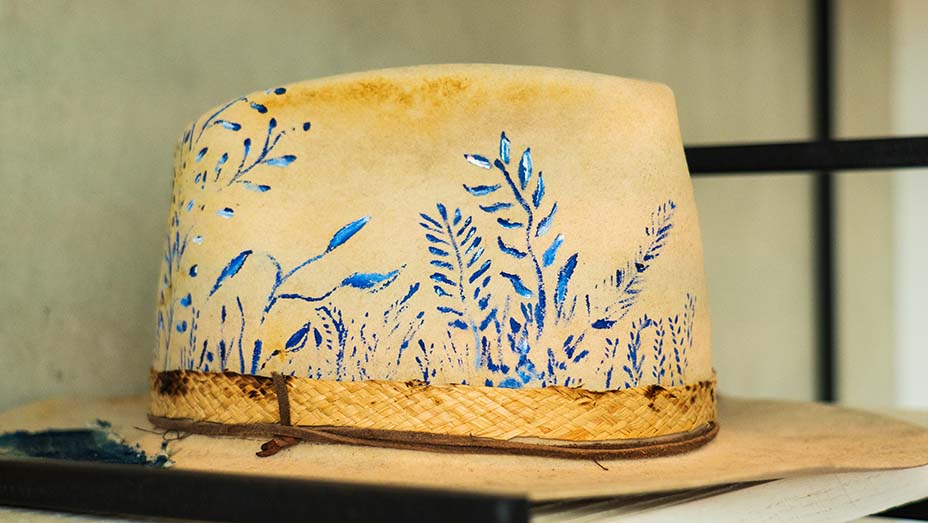 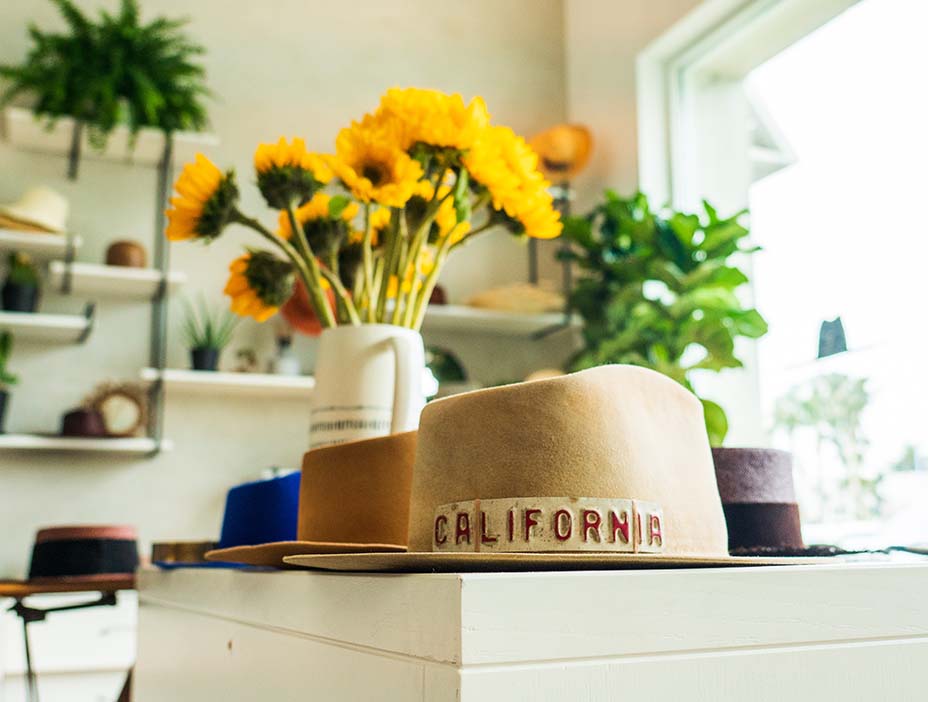