Kathryn Boyd Brolin has worn many hats — model, actress, producer and now denim entrepreneur, her sole focus since quietly launching Midheaven Denim in January. Calling in from her husband Josh Brolin’s family ranch in Paso Robles to talk to THR, Brolin points out that she is 5’11” tall — not 5’10” as listed on IMDB — and that her lofty height served as inspiration for the new line of jeans aimed at women between 5’9″ and 6’3″. The collection consists of four timeless styles that cost $230: a mid-rise skinny in black or indigo, a faded button-fly skinny, and a mid-rise indigo flare. Four more styles will debut next month when the brand officially launches. All styles come in inseams from 33 inches to 38 inches. 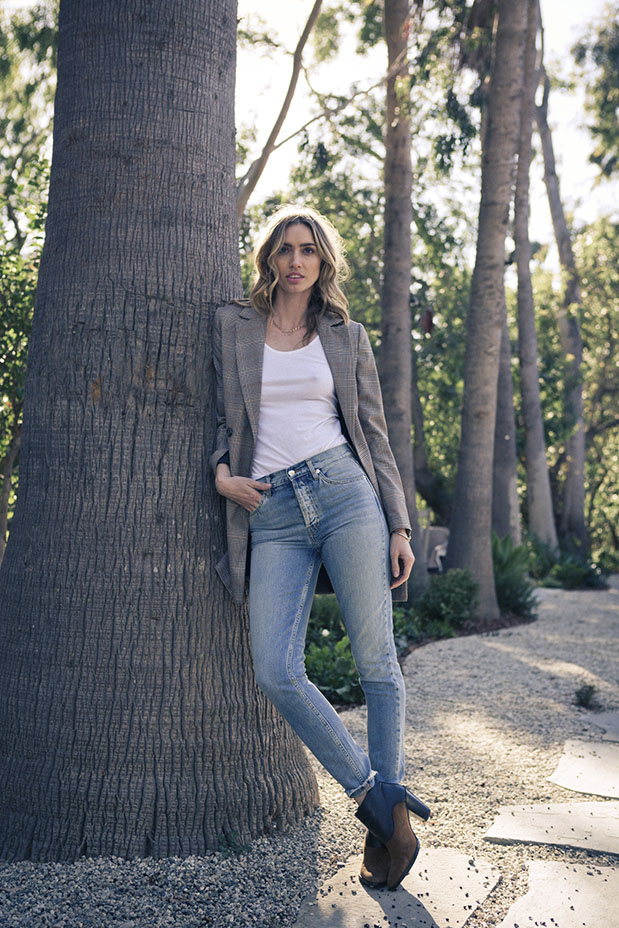 “It was always a constant annoyance to try to find jeans that were long enough, so Midheaven has been something I’ve been kicking around in my mind for the last five to ten years,” says Brolin, who has no official design training but learned the ropes by paying close attention to tweaks made during long hours as a fit model — she signed with LA Models Agency in 2014. She also credits an ace production team and pattern maker. “I wanted a line of basic styles that I love that wouldn’t go out of style and that would give me that extra two to three inches of inseam I really needed. Girls in this height range were an underserved demographic.”

Extra-long jeans designed by models have been done before — think Karlie Kloss for Frame (skinny and flare styles with 36-inch inseams) and Rosie Huntingon-Whiteley’s capsule line for Paige last year (no longer available, but Paige still has a collection of Ultra Skinny exta-long jeans with 35.5-inch inseams). Mass brands such as Levi’s, Topshop, Madewell and Gap have also added tall sizing to their denim lines. But Brolin says her company stands out because the entire business is devoted to tall styles: “I saw a space in the marketplace for a denim company that focuses specifically on the tall girl community,” says Brolin. “Our latest photo shoot is about a bunch of girls getting together and owning the fact that they’re tall, enjoying this beautiful God-given gift of height and loving and embracing and feeling grateful for it!”

#Repost @kathrynbrolin with @get_repost ??? Still on a high from our @midheavendenim shoot last weekend!!! These tall drinks a water looked like a band of runaway cowgirls on stilts and couldn’t have represented the brand any more beautifully. Our fearless leaders @brianbowensmith @brandonsmith8 @kmchugh59 bringing a gorgeous vision to the mix along with the hubs’ massive creative influence @joshbrolin . @hayley_atkin_ styling and @campbellcarly HMU were major power players and of course @the_michelledeleon @raykrussell and @kayprech thank you all for a delightful day and a most inspired moment in this journey of building Midheaven. Can’t wait to show you all our beautiful lookbook. @brianbowensmith

Nicole Kidman and Cindy Crawford are among the tall girls rocking Midheaven Denim, since Brolin sent them samples. “It’s definitely a big compliment,” says Brolin. “If you’re gonna get feedback from anybody, get it from people who’ve been living in and being photographed in jeans their whole life. They are both power players in this business who are tall and look really, really good in the jeans.”

Another distinction between Midheaven Denim and other tall-centric jeans is Brolin’s focus on sustainability. Midheaven Denim jeans are crafted from premium fabric produced in Italy by Candiani Denim (a mill founded in 1938 near Milan and known for its quality and commitment to sustainability). “They’re the greenest textile mill in the world,” says Brolin. “Candiani sources a large percentage of their cotton from the Better Cotton Initiative and they reduce, reuse and recycle in every aspect of production. It’s more expensive, but it’s worth it to me to use a company that’s doing the same thing that I want to do in terms of not completely compromising the environment just for my own business betterment.”

Midheaven’s fabric is produced in the world’s leading eco-conscious denim mill. The contents are such that our products remain soft to the touch, and the stretch and recovery you’re given are not compromised by the impeccable quality of fit. Order yours at www.midheavendenim.com

The jeans are then washed, cut and sewn in downtown Los Angeles. “It took me about a year to find washhouses that take the same sort of measures I was looking for,” says Brolin. “It was hard to find completely eco packaging but all the materials I found are 100 percent sustainable. And we use carbon-friendly UPS shipping. Every step is taken with the earth’s health in mind.”

“I was looking for a beautiful, unique name that had this wonderful imagery of looking upward and feeling your best and holding your shoulders back and being confident,” says Brolin, in reference to Midheaven. “I feel like that’s a big problem that a lot of tall girls have. I remember when I had my big growth spurt and, all of a sudden, I was a head-and-shoulders taller than everyone around me, boys included, and I had no idea how to deal with that. I was self-conscious and it took me a long time to feel comfortable wearing heels. So it was really that emotional place that I wanted to tackle as the foundation of my business. I want to combat this idea that we have to lean down and not completely embrace our height.”

“The term ‘mid-heaven’ is used a lot in the astrology world and it literally means ‘middle of the sky’ and it embodied how I want my company to be seen,” Brolin continues. “After a while, I wore my heels and owned my height. When I don’t attempt to be the same height as everyone else, people really pick up on that and I think they get inspired by that confidence because they see you’re okay standing out and owning your own space and embracing it.”

The term “Midheaven” is defined as the highest point at which the sun hits in its daily traverse around the earth. Being tall is not only a physical state, but a state of mind. And so Midheaven is derived from those qualities: a state of mind, a living upwardly, a constant pull towards the sun. Confidence, diligence, faith. #MidheavenDenim