The glitz and the glamour were back for the 10th year at the Hotel du Cap, where amfAR brought out the Cannes crew — jurors Will Smith, Jessica Chastain and Uma Thurman, as well as this year’s reigning queen of the Croisette, Nicole Kidman.

This year’s theme was the golden age of Hollywood, with the garden tent done up like an art deco jazz club. Dancers from Paris’ Lido club took to the stage, with a big band playing tunes.

To say it was Gatsby-esque would be an understatement, as the global fundraising chair is now Milutin, yes, Gatsby, the Serbian film producer. He sat between Leonardo DiCaprio and Tobey Maguire at a table surrounded by bodyguards.

See All the Looks From the Glitzy amfAR Gala in Cannes

Tracee Ellis Ross and Moschino designer Jeremy Scott entered arm-in-arm, making a grand entrance with her in a red, sequined Jenny Packham gown and he in a lace, see-through suit.

“We were both solo, so we decided to make the best of it,” said Ross. The two, who have been friends since Scott’s first show in L.A. over a decade ago, ran into each other in the lobby of the du Cap the night before. “We were like, ‘Yes!’ We decided it was kind of perfect.”

If her showstopper of a gown would be dramatic for another actress, Ross recalled her pedigree. “For me, it feels pretty normal. I mean, I come from feathers and sequins,” she said. Mother Diana was the surprise guest and would hit the stage in an equally dramatic black sequined robe and tulle cape number later. 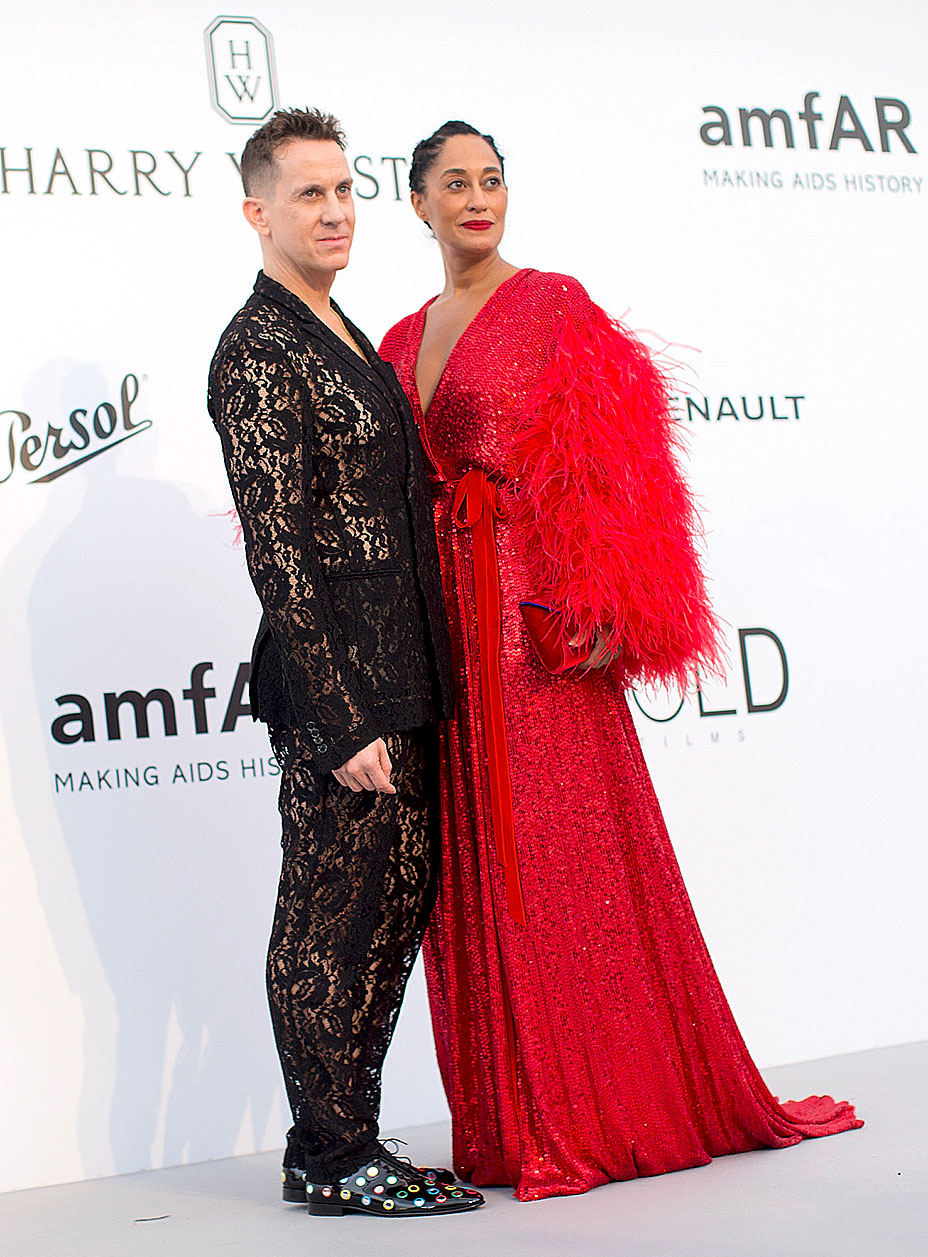 Bella Hadid, who was posing for selfies with Rita Ora, deemed herself “too nervous” to speak.

A hungry Kate Upton, who was snapping her own pics with Saturday Night Live‘s Nasim Pedrad, critiqued the hotel’s hors d’oeuvres. “I could literally eat anything right now, except those appetizers,” she said of the odd melon balls and anchovy rolls.

Kidman and Dustin Hoffman opened the evening, with Hoffman joking that, for the highest bidder, “I’ll instantly grow taller than Nicole.” Perhaps reflecting much of the South of France crowd, the auctioneer’s assistant gave greetings in Russian.

David Beckham walked out to Prince’s “Sexy MF” and declared his nervousness onstage. A package of a soccer match against him, followed by dinner in Paris, went for 350,000 euros ($391,000), while a week for someone and their 60 closest friends offered by 1Oak’s Richie Akiva at his new Maldives outpost went for 700,000 euros ($782,000). Akiva, who called Gatsby his “brother,” teased the vacation’s company: “I won’t say who they are or what they do, but they will be there.” 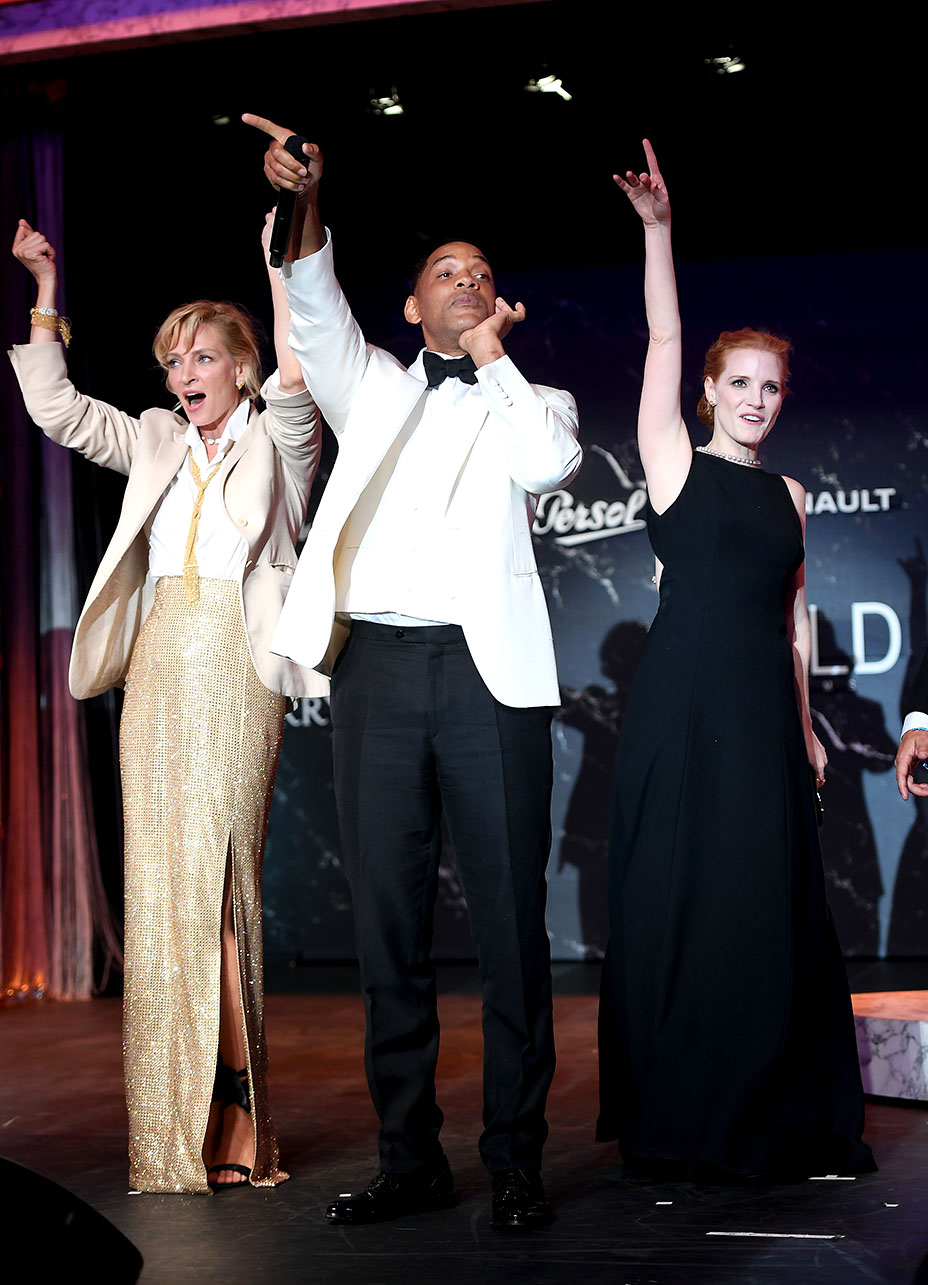 Smith, Chastain and Thurman took time out from their festival duties to attend the gala, where Thurman brought her 15-year-old son, Levi, along as her date.

Thurman, who is president of the Un Certain Regard sidebar, said it’s “very serious, very intense” and that she would have to make it a (relatively) early night, as she had three more screenings and a day of deliberations Friday.

The trio took to the stage to auction off a collection of portraits by George Hurrell, with Smith taking over auctioneer duties from Simon de Pury and busting into an impromptu beatbox. “These are portraits of some of the most magnificent white people ever! Oh, that’s awkward for you,” he joked of the collection of old Hollywood stars, including Marlene Dietrich and Rita Hayworth. But the bidding hit a frenzy when Smith offered up an onstage selfie with the group, and the group eventually sold for 500,000 euros ($560,000). 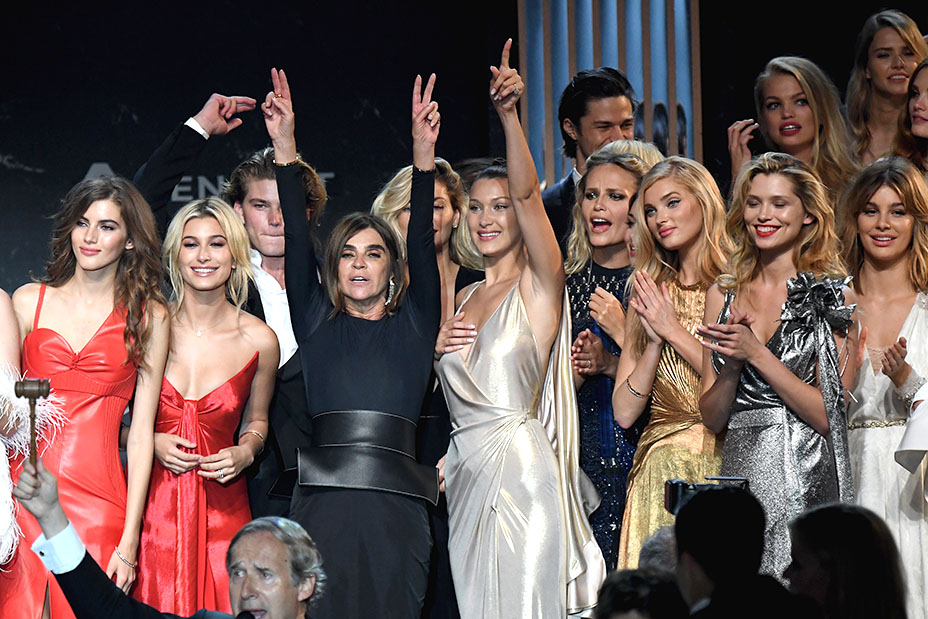 The fashion show, curated each year by Carine Roitfeld, saw models including Hadid, Doutzen Kroes and Irina Shayk walk in dresses from the cream of the couture crop, including Armani, Balmain, Chanel, Dior, Giambattista Valli, Givenchy, Marc Jacobs, Miu Miu, Oscar de la Renta and Tom Ford. Giving “see-now, buy-now” a whole new meaning, the collection of 30 dresses was snapped up for a cool 3 million euros. Even co-host Harvey Weinstein got in on the action by donating $1 million to the organization on behalf of his late mother, Miriam.

All in all, the night raised more than $20 million for the AIDS research charity.

For any other event, Nicki Minaj might be the headlining artist, but at amfAR, she’s just an opening act. Though the singer performed her latest, “Swish Swish,” she was just warming up the crowd for Rita Ora, who debuted her latest single, “Your Song,” who in turn was just a warm-up for the real headliner of the evening: the legendary Diana Ross.

The crowd went bonkers, with Hadid and Roitfeld rushing to the stage, dancing and and singing along to “Ain’t No Mountain High Enough” and “I Will Survive.”

Ross grabbed model Lara Stone’s outstretched hand from the stage, causing the model to excitedly jump up and down and into the arms of Balmain designer Olivier Rousteing. “Oh, my God, oh, my God, when does that ever happen?” she screamed. Only in Cannes. 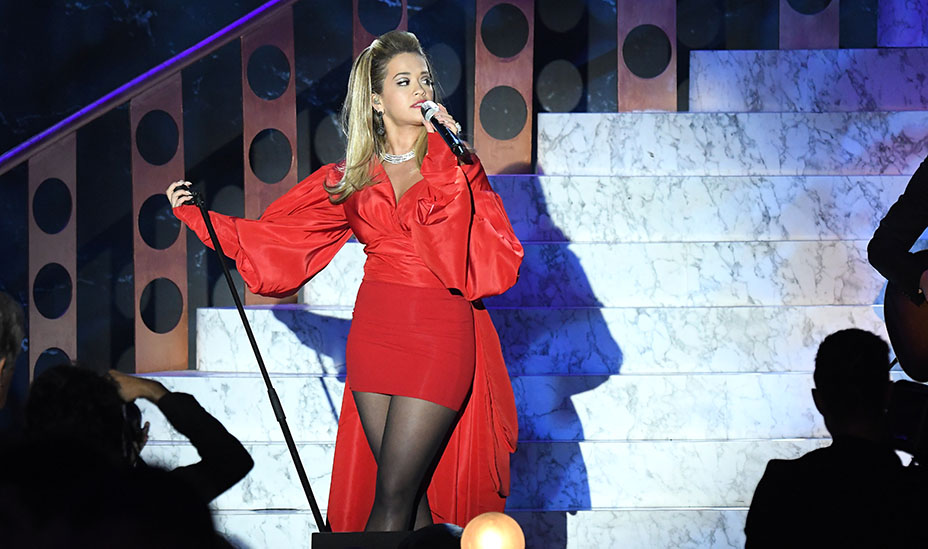