When the L.A.-based size-inclusive e-tailer 11 Honoré wrapped its very first fashion show for fall 2019 at New York Fashion Week in February with a runway spin by Laverne Cox, resplendent in a burgundy Zac Posen gown, it heralded a growing shift in the fashion industry that’s been a long time coming. “It was a triumphant moment in time,” Patrick Herning, founder and CEO of the luxury multi-brand e-tailer catering to sizes 10 to 20 and up told The Hollywood Reporter. “When I think about the role we played last season, it was such a stride in the conversation about body positivity and inclusivity — to have all of those models, and influencers, brands, designers, all celebrating this moment in such an important way. It almost needed to be memorialized.”

Fortunately, that moment is happening more often, with a growing number of brands offering size-inclusive lines (Christian Siriano announced a size 0-28 capsule line in collaboration with J. Jill this week) and a more diverse range of body types seen on the catwalks during this spring-summer 2020 New York Fashion Week. Instead of a runway show this season, 11 Honoré decided to celebrate its latest triumph — the recently announced collaboration with Good American, founded by Khloé Kardashian and Emma Grede, to offer plus-size denim on the e-retailer’s site — with a party.

This is #TheNewRunway It’s elevated, inclusive & meaningful. #GAx11H Thank you to @shopify who is powering some of today’s most #fashion forward brands through its @shopifyplus platform. Thank you @goodamerican for this amazing partnership and for making beautiful denim for so many bodies. Thank you @tamaramellon for your beautiful #luxury footwear. Thank you @bobbibrown for finishing our looks. Thank you @cadillac For getting us to the @gramercyparkhotel in style.

Styled by Jordan Foster in Good American denim (in flare and skinny style, some with frayed hems) paired with Tamara Mellon shoes and pieces such as Carolina Herrera jacquard coats and Derek Lam blouses available now on 11 Honoré, the 24 models (including Zuri Marley, daughter of Ziggy) looked ready to walk a runway, but rather showed up in Cadillacs at the Gramercy Hotel for the soiree. “We always want to be part of the conversation,” says Herning. “It doesn’t always have to be just in the form of a runway show.”

The partnership marks the first time that Good American has agreed to sell a partial-size run to a retailer, in this case in sizes 10 to 24. “Good American wants women to feel confident in their own bodies, and we’ve seen many brands follow suit with this thinking. There’s still a lot of work that needs to be done within the industry, but we’re proud to be leading the way to more inclusivity,” Grede told THR.

“Denim is the most democratic staple in your wardrobe,” says Herning. “I don’t care if you’re a size 2 or a 20, you put on a great pair of jeans and it changes your life. Emma’s cracked the code on the perfect fit and to be able to offer that to our customer is so exciting. To make people feel good, and to empower them, is so exciting — because ultimately, that’s what we’re in the business of!”

“It’s important that plus-size women are celebrated during important times of fashion, in a luxurious way too,” says Herning. “To see what’s happened in just over two and a half years, since we first started — when Ashley Graham became the first plus-size model in history to walk at Michael Kors, to Ashley being on the cover of Vogue in between Gigi (Hadid) and Kendall (Jenner) — it’s incredible. But it took a long time to get to that point. We’’re seeing such progress and a real paradigm shift. It’s not only on the model side but on the brand side too, and it all feeds into one another.”

The shift in thinking is being welcomed by the likes of singer Bebe Rexha, who is partnering with formalwear designer Sherri Hill for her New York Fashion Week presentation. The Texas-based designer, known for helping to launch the runway careers of Kendall and Kylie Jenner, is creating a collection of ready-to-wear dresses sized from 00 to 18, with many styles going up to size 26. The brand also makes custom dresses to measure at any size range. Hill offered her services to the Grammy-nominated singer, who earlier this year called out fashion designers who told her she was “too big” to dress for the Grammys, so Rexha returned the favor by performing at Hill’s runway show Friday, Sept. 6.

The convention celebrating diversity and fashion inclusivity, known as CurvyCon, was a half-day event five years ago with one fashion show. But during New York Fashion Week, the event returned for three days with three fashion shows, and the support of actress and “I Weigh” founder Jameela Jamil, Grammy winner Melanie Fiona, Claw’s Jenn Lyon and designer Nabela Noor, who took part in discussions focused on body positivity.

CurvyCon, supported by plus-size e-tailer Dia & Co, also attracted a host of big name brands such as Macy’s and Target. “Five years ago, the options were still very limited, and a lot of the styles were dictated to the customer, not the other way around,” says CurvyCon co-founder Chastity Garner Valentine. “Now there are so many options, you can really hone in on whether you’re the party girl, or the Gap girl, or the working girl. There are so many more options so that you can dictate your own style, now that there are more retailers offering plus-size that weren’t offering plus-size in the past.” 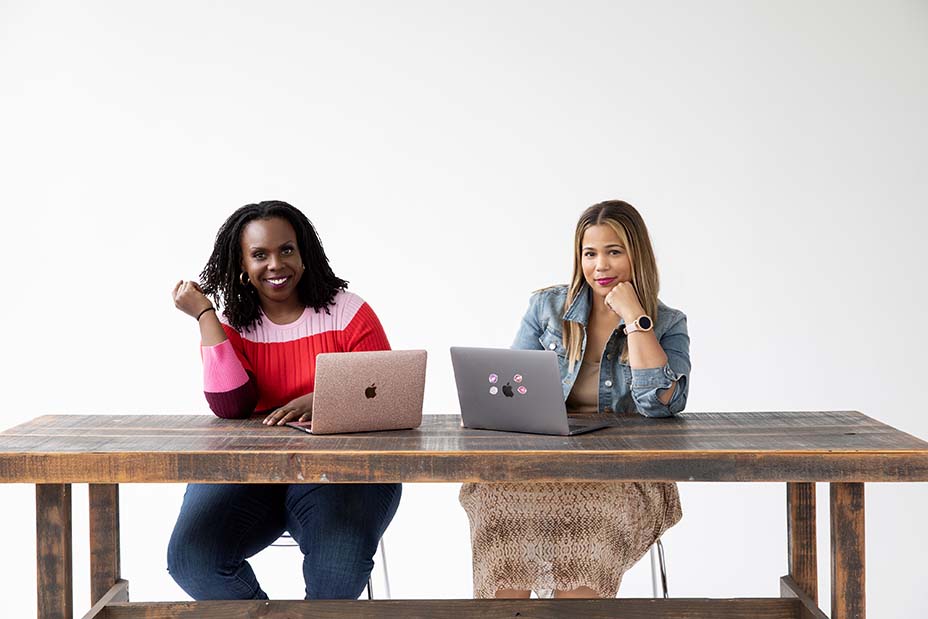 One brand showcased at CurvyCon was Anthropologie, which debuted APlus by Anthropologie earlier this year and is hosting a series of events to welcome guests and introduce attendees to its extended-size offerings. CurvyCon also has expanded its fashion programming to include Macy’s, which will feature looks from its Fall “Find your Remarkable You” campaign, as well as Target. “They are showcasing 20 years of fashion, with their designer collections and offering plus sizes too, which is an amazing thing,” adds Garner Valentine.

“It says they’re listening,” says Garner Valentine’s partner, CurvyCon co-founder CeCeOlisa, in terms of the brands showing a deeper commitment to inclusivity. “They understand this customer is ready to shop. They should have been catering to this customer before, but now they know, she also wants the same options as other women. If businesses are smart, they look at the numbers. If almost 70 percent of women are above a size 14 and we’re watching the fashion industry have its own issues — with brick and mortar, for example — it could be a great answer to extend who these brands serve.”

Indeed, Calvin Klein has used indie rapper Chika on a billboard Kate Moss once occupied. “It’s great to see these legacy brands pivoting, after lost decades of not serving plus-size women,” says Olisa. “Women are speaking up, using their voices, and brands are listening, and we’re happy to be part of that catalyst for change.” 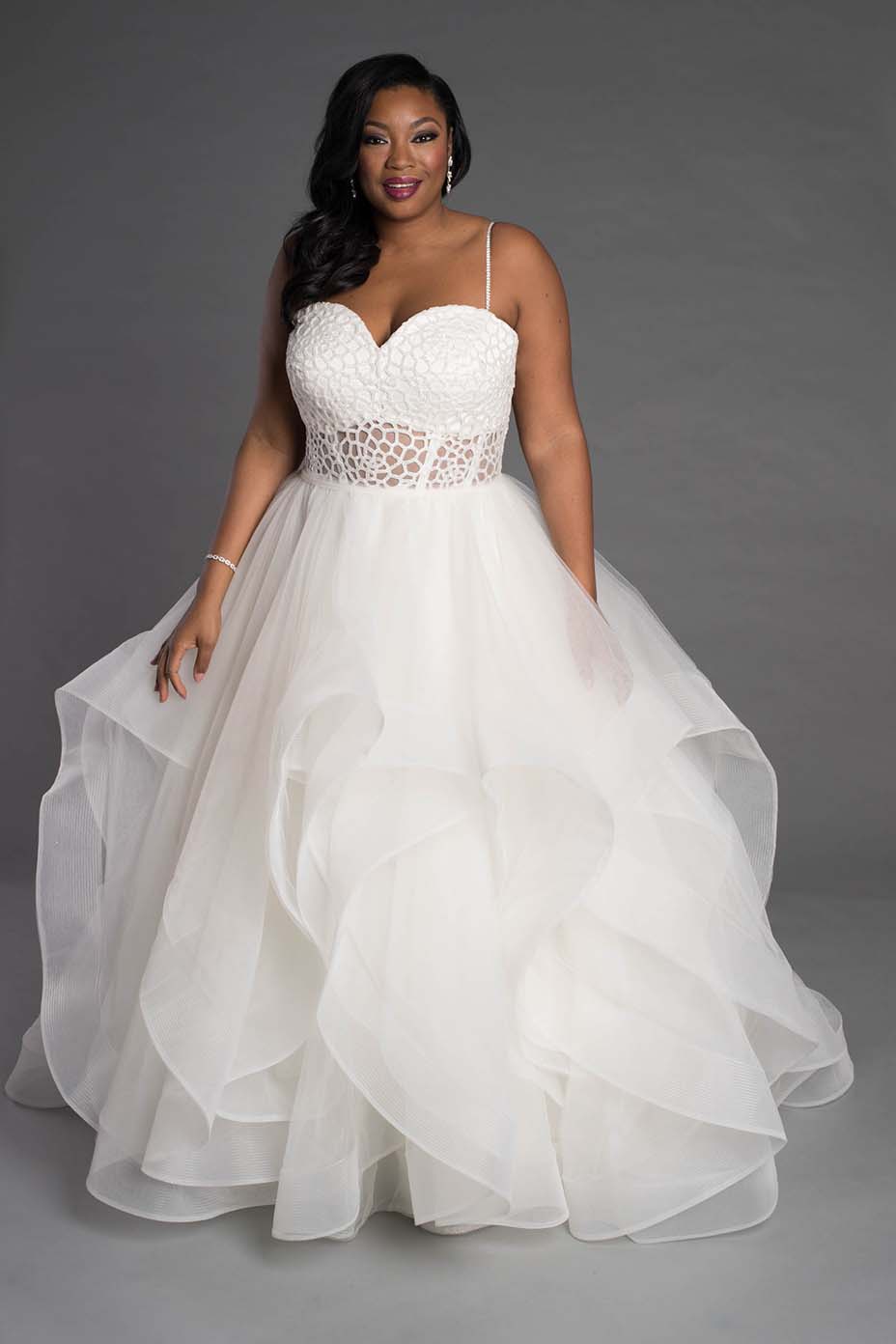 Also taking place at CurvyCon for the first time is a wedding show, hosted by The Knot and Kleinfeld. “Speaking from my own personal experience, I didn’t even get to try on my bridal gown 10 years ago,” says Garner Valentine. “The Knot and Kleinfeld have been leading the charge on that to make sure the plus-size bridal experience is more inclusive, so you’re actually able to try on your new dress before you buy it, which is a crazy concept!” she chuckles. “It was my personal truth, and for a lot of us, that the sample sizes did not go large enough so we could try dresses on.”