“The collection was inspired by this idea of modern pop artists, particularly Ashley, who painted today,” Siriano told The Hollywood Reporter after his show. “I really just wanted the clothes to be whimsical and powerful and emotional like her work, but sort of playful and fun and not taking themselves too seriously.”

On the runway, models in a wide range of body types, ages and ethnicities wore the clothes depicted in the paintings, implying that every woman is an icon in her own right. Longshore took to the stage to add details and words to the paintings as the models walked. The clothes winked at whimsy — literally, with a series of eye prints, followed by metallic red lace cut into lip patterns and fashioned into blazers, trousers, dresses and shoes. Sleeves were volumized in sculptural and balloon shapes and a new cape top silhouette with a floor-sweeping train was paired with tailored shorts.

The fun continued with shimmer aplenty: Fabrics with metallic sheen, sequined fringe, lacquered velvet and a smattering of colorful crystals on blazers and jeans (further embellished with strokes of paint). With art as inspiration, no surprise that color popped — cobalt, marigold, fuchsia, seafoam green, and a cluster of gowns in metallic rainbow stripes. The finale was a lineup of layered tulle-la-la gowns that would make a grand entrance at any awards show.

Coco you inspire me so much thank you for your beauty and grace. #cocorocha #nyfw

Looks worn by men (such as a red carpet-ready, belted metallic blazer and matching shorts) seemed to nod to a Siriano brand expansion. “Yes, we haven’t really done menswear [before],” Siriano told THR. “We’ve done some hints. Also the idea that it’s menswear that can be worn by anybody.” 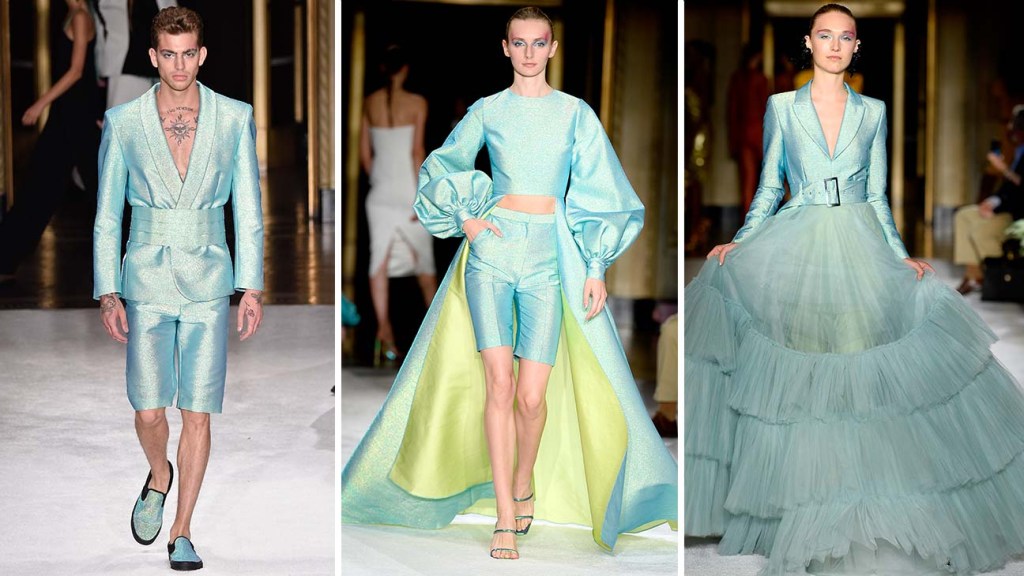 Longshore, known for incorporating messages of female empowerment in her work, told THR, “That was really thrilling; it was like a massive rush of energy because I’m not a live painter. Christian and I have been friends for years. He works his ass off, he loves to make women feel beautiful, and his vibe and special energy really radiate in what he makes. He is an incredible designer. He sent me images of his new collection and I’ve been painting his beautiful color palette and his beautiful designs onto these iconic women, and they are really powerful. This isn’t about being skinny. It isn’t just about clothes. He is an amazing artist and he’s creating his own Christian world. I’ve got Ashley world and these campaigns have come together and it’s a celebration of creativity.”

Speaking to the optimistic feeling of the collection, Longshore said, “This is what we need in America right now. I mean, the news is depressing. We need inspiration. We need color. We need clothes. We need music. We need poems. People absorb themselves in the arts when shit goes to hell in a handbasket, you know?”

Producer and Black-ish star Marsai Martin showed up in a custom look that Siriano designed for her as part of his collaboration with SweeTarts, the sweet-and-sour candy that dates to 1962, for the brand’s “Be Both” campaign. In a multitude of hues to reflect the candy colors, the style plays on the candy’s juxtaposing flavors with two looks in one: A long pant leg and tailored long-sleeved blazer top in bright colors on one side and a tank top and shorts with a fringed overlay in pastel tones on the other. (Think party on one side; business on the other).

“It’s like an elegant, fun, celebratory side saying, ‘What’s up?’; and then this side is more of a business, ‘I’m here’ situation,” said the 15-year-old actress. “I’m super excited, of course, to be here since it’s my first New York Fashion Week. It’s something that I’ve always wanted to do and fashion is up my alley, so I love it. And of course, I love being with Christian Siriano. His styles are so unique, yet so authentic to who he creates for. So the fact that he got to customize something for me inspired by SweeTarts, which is my favorite candy, is pretty dope! I’m having a good time, but it has to be cut short because I have to go back to L.A. to continue working on Black-ish. But I definitely know it’s not going to be my last fashion week!”

After the show, Gellar said to THR, “I find Christian so magical, both as a designer and a person, because he’s an incredible human too, and not everyone gets to know that. And also what he does by including all different body types. The fact that he makes fashion accessible for someone who thinks, ’I can’t wear that. I can’t be a model. I don’t look like that.’ I mean, that saves people’s lives, and I’m always in awe of what he does. I loved the silver fringed dress, the yellow gown with the pockets and the red kiss dress!”

Backstage, Coolidge (standing with Silverstone and Trainor) said: “The three of us were all just talking about how diverse Christian is. We were saying how he likes curves; he really does! Going in to find a dress to wear tonight, I cannot tell you all the extremely different [options] he had. What I think is amazing is that everything on his rack just fit like a glove. It was kind of unbelievable. That never happens to me! Never! Each one had a really different look. A lot of designers you see and go, ‘That’s them,’ but he’s a lot of people in one. He’s not locked into one look. His designs are interesting and sexy and feminine and incredibly forgiving. There was this black dress I put on and I looked like a tiny little gnat! I looked so teeny, and I would have worn it, but this one is more fun! And you would never know that he had hit the big time. He’s unbelievably humble and kind, incredibly normal and sweet.”

A fashion show newbie like Martin, Trainor exclaimed, “It’s my first fashion show! I just love Christian because he knows how to dress me and my curves. He makes me look so good.”