Opening Ceremony’s Carol Lim and Humberto Leon never do anything in an expected way. Last March, they held their spring 2018 fashion show at Disneyland, and in 2017, they collaborated with the New York City Ballet, debuting their collection on dancers in performance; for their work as the creative directors of Kenzo, they’re more inclined to produce a short film with a quirky narrative than mount a traditional runway show.

For Opening Ceremony’s fall 2019 collection, Lim and Leon decided to flip the script, celebrating the clothes before premiering them for public consumption. On Sunday night at Hotel 50 Bowery, in the midst of New York’s Chinatown, the pair hosted a dinner to celebrate the Chinese Lunar New Year — and, given that 2019 is the year of the pig on the Chinese calendar, what to title the event? A “Pig Out,” of course.

The night kicked off at Rice & Gold, Hotel 50 Bowery’s in-house restaurant, with sibling chefs Tommy and Camie Lai imported from Greenwich Village’s Rasa to serve up a Malaysian feast for a select group that included friends of the brand, from Rosario Dawson to fashion publicist Cynthia Leung, who introduced Leon to Lim when all three were undergrads at UC Berkeley. When it comes to food, the duo behind Opening Ceremony is all too happy to embrace tradition, with dishes like Prosperity Salad, a mix of bright colors and textures that’s meant to be vigorously tossed before eating (the higher the toss, the more likely you will experience prosperity in the coming year). Satay chicken with peanut sauce, lettuce-wrapped pork belly, Singapore cereal prawns and golden birds’ nests were also on the menu as the start of a night that was all about revelry. 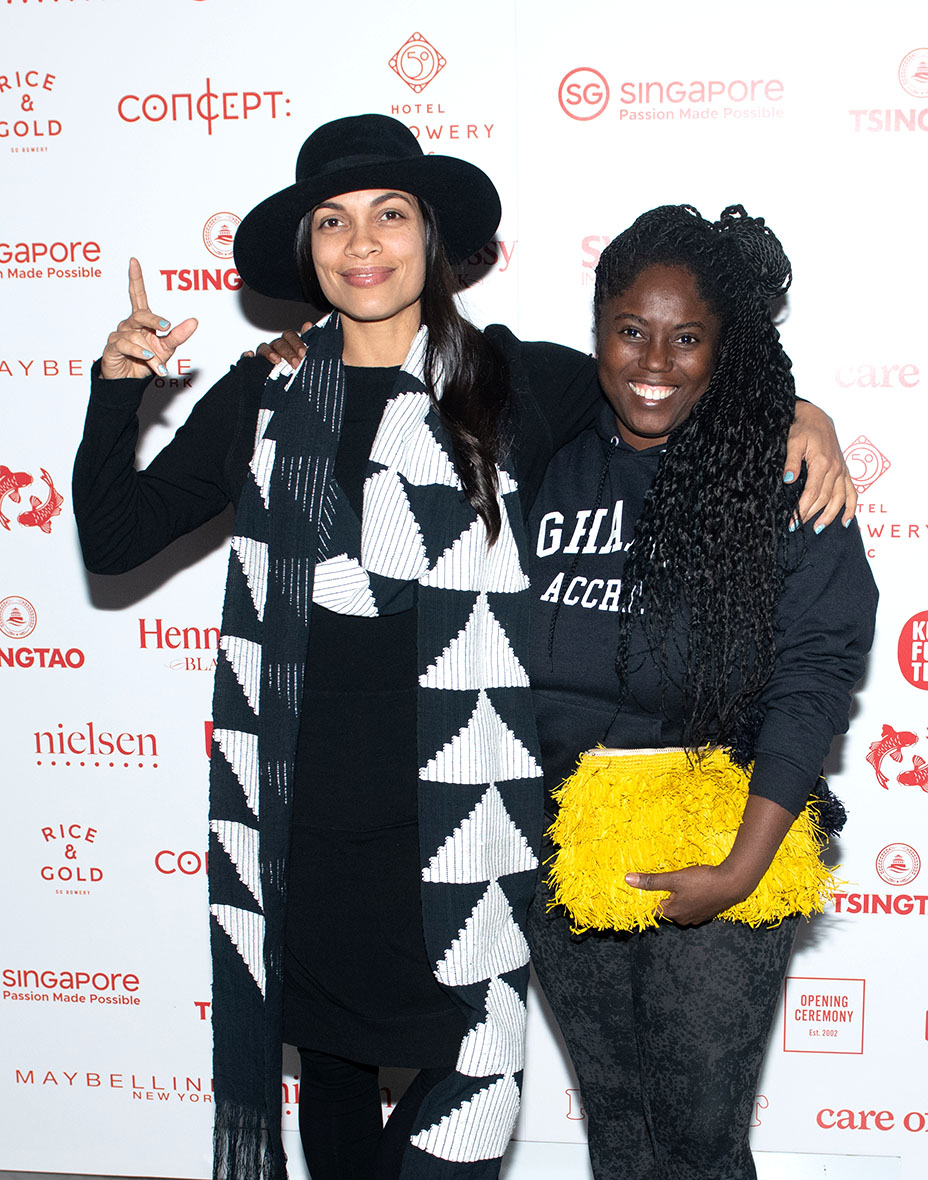 “Humberto and I always think about the fact that we have a platform. So, how do we use it, and how do we do what feels right for us?” Lim explained to The Hollywood Reporter. “We’re feeling very festive at the moment, and given that the Lunar New Year was happening right around the time our show was scheduled, we decided to celebrate our roots.”

Following dinner, the doors were thrown open for three parties that typically happen in locales around downtown Manhattan, but for this one night were brought together within the Hotel 50 Bowery space: on the main floor, the queer Asian and Pacific-Islander dance-party collective known as Bubble_T; on the second floor was Gush, a lesbian QTPOC intersectional and interdisciplinary party; and on the lower level was Club Glam, a monthly party hosted by DeSe Escobar as part of the Glam Collective.

For Opening Ceremony’s FW19 lookbook, our co-founders @Humberto and @CarolLim explored their Asian identities. The lookbook launches in conjunction with the Lunar New Year celebration we hosted last night, “PIG OUT” with @bubble____t, @GushOfficial, and @1inamilli0nangel. Swipe through to see the FW19 collection on our Asian community of creatives, artists, icons, and more Shot by @sebkimstudio Styled by @kyleluu Makeup @graceleebeauty @maybelline Hair @TsukiHair Nails @naominailsnyc Production @_studiolou_

“I wanted to celebrate with three parties I love and go to all the time in New York City,” Leon told THR. “For people who don’t live in the city, I feel like this is such a great way to experience New York in a totally different way. To have these three parties that never existed together all happening at the same time under one roof, that seemed to be the perfect way to celebrate our collection.”

Leon and Lim also added a philanthropic component, setting up a Pearl River Mart pop-up shop that raised funds for New York non-profits Apex for Youth, providing mentorship and educational programs for underserved Asian and immigrant youths, and the Museum of Chinese in America.

Twelve hours after the party’s 10 p.m. start (a “wow” moment in itself, with a line of guests snaking around the block), Opening Ceremony debuted its fall 2019 collection via the release of a lookbook featuring an all-Asian cast comprised of friends and family of the brand. Included is Leon’s mother, Wendy (a favorite among OC fans), in a multi-print dress with prairie styling, as well as designer Anna Sui in a jacket sporting a heart motif and M. Butterfly playwright David Henry Hwang in windowpane-plaid pants and a mixed-print polo, part of OC’s ongoing collabs with Dickies and Lacoste, respectively. Leung also makes an appearance in an oversized double-breasted pantsuit in an eggplant hue, while the members of Bubble_T and the Glam Collective also are featured.

For Opening Ceremony’s FW19 lookbook, our co-founders @Humberto and @CarolLim explored their Asian identities. The lookbook launches in conjunction with the Lunar New Year celebration we hosted last night, “PIG OUT” with @bubble____t, @GushOfficial, and @1inamilli0nangel. Swipe through to see the FW19 collection on our Asian community of creatives, artists, icons, and more Shot by @sebkimstudio Styled by @kyleluu Makeup @graceleebeauty @maybelline Hair @TsukiHair Nails @naominailsnyc Production @_studiolou_

“We wanted to shoot people we felt were iconic to us and to the community at large,” Lim said. “We always say that our clothes are about classics with a twist, and we’re pretty inclusive in both size and style. Humberto’s mom and my mom wear the collection, and we have nieces and nephews who are 13 and 14 who wear it as well, and then our core demographic falls in the middle. For everyone who comes into the store, we want them to find something that says, ‘This feels like me,’ and that’s reflected in the look book as well. You’re sure to identify with someone.”

As the hour approached 11 p.m. and guests including Justin Theroux, Prabal Gurung and Leigh Lezark arrived, it was easy to see that not every fashion brand needs the ingredients of a runway show to tell its story. “Carol and I have used our platform to talk about things that are important to us, and taking this moment to celebrate our heritage and our community, it feels right, and it also feels super American,” Leon said.

“Humberto and I always have a motto: We have to love this, and we have to have a smile on our face and enjoy coming to work” Lim added. “We feel very lucky when we can use our platform to talk about what’s important to us. That’s the single greatest luxury we can have.”