Continue to The Hollywood Reporter SKIP AD
You will be redirected back to your article in seconds
Skip to main content
September 11, 2019 7:44am

The show opened with Rihanna standing in the middle of a series of blocks, surrounded by models of all shapes and ethnicities who wore a variety of black styles from the latest lingerie collection. With her hair pulled back in a long sleek braid, the musician-designer-entrepreneur was clad in a honeycomb-textured bodystocking with a black bra, velvet miniskirt, large diamond earrings and heels. The models refreshingly wore sneakers, pointing to the brand’s grounded image. While she disappointingly did not sing (similar to her appearance in the Amazon Studios film Guava Island with Donald Glover), Rihanna showed off some killer dance moves.

This was the first in a string of highly choreographed numbers that took place on an elaborate white-walled set (that called to mind Cycladic island architecture) with multiple stairways, 20 arched openings to showcase performers and a round pool lit up on the edge. Surprise models included Laverne Cox, Cara Delevingne, Normani, Gigi and Bella Hadid, Christian Combs and Aquaria from RuPaul’s Drag Race. One colorful act featured a range of turquoise, red, purple and pink lingerie, while some edgier pieces were modeled while the club song “Dirty Nasty” played.

Musical acts were interspersed. In a kimono-sleeved black robe, Halsey walked down a staircase, singing her new song “Graveyard.” Donning silver leather looks, Migos stood in the pool to perform “Pure Water,” a collaboration with Mustard. Big Sean sang “Clique,” bringing on ASAP Ferg for “Bezerk.” Then DJ Khaled strolled on in a bright turquoise floral-print shirt with lavender pants, shouting, “Rhianna, we love you,” before launching into “All I Do Is Win” and, with Big Joe, “All The Way Up.” Tierra Whack jumped in to rap “Clones” and then Fabolous came on for “You Be Killin Em,” swapping in, “Rihanna, you be killin em.” 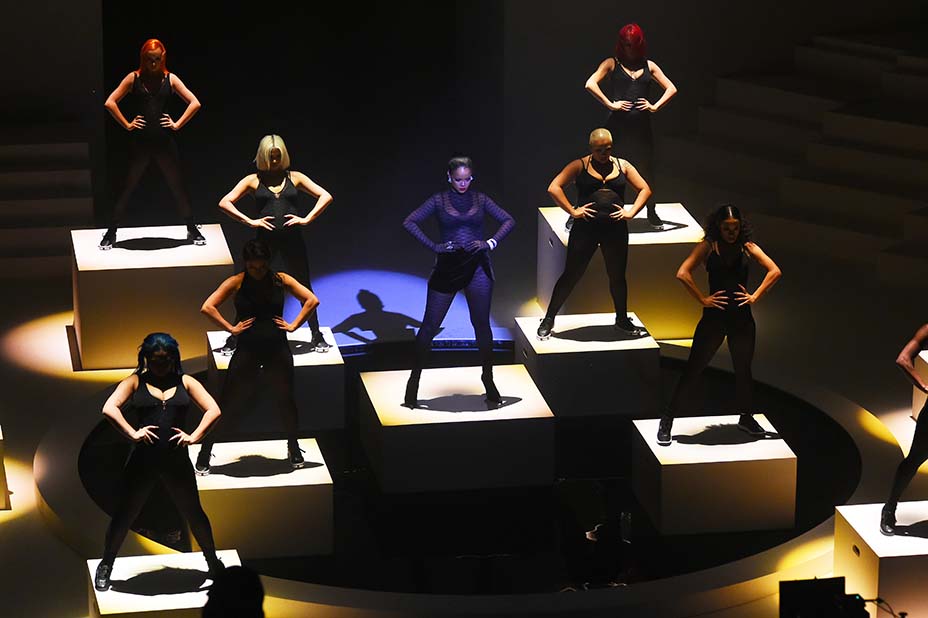 The big question buzzing on the carpet was: Is Savage x Fenty the new Victoria’s Secret? Time is ripe, with the Ohio-based lingerie chain scrambling to turn its business around after becoming increasingly out of touch with consumers. (In hot water over CEO Leslie H. Wexner’s ties to Jeffrey Epstein and the lack of inclusivity in its image, the company pulled its fashion show from network television after a 23-year run).

In contrast, Rihanna has made an inclusive, body-positive image a centerpiece of her brands — using a diverse cast of models in her campaigns (there were even pregnant models at her first, jungle-themed Savage x Fenty show in Brooklyn last September) and putting curvy mannequins on display at the pop-up shop for her LVMH Fenty clothing and accessories brand that debuted in May. Her Fenty Beauty makeup line set a precedent for accommodating a huge range of skin tones; last month, a new foundation dropped in 50 shades. According to a Savage x Fenty press statement, the brand is “offering up a new type of sexy, where attitude meets individuality.”

While Victoria’s Secret model Shanina Shaik refused to answer any direct questions about VS she said this about Savage x Fenty: “It’s Rihanna and I love her style and how she’s so unique. She incorporates all women, which I think is really important and I want to support that.… Her lingerie is really fun. I love that she thinks outside the box. It is really important that all brands make women feel confident about themselves. It’s not one body type in this world. We all have different shapes and sizes.” 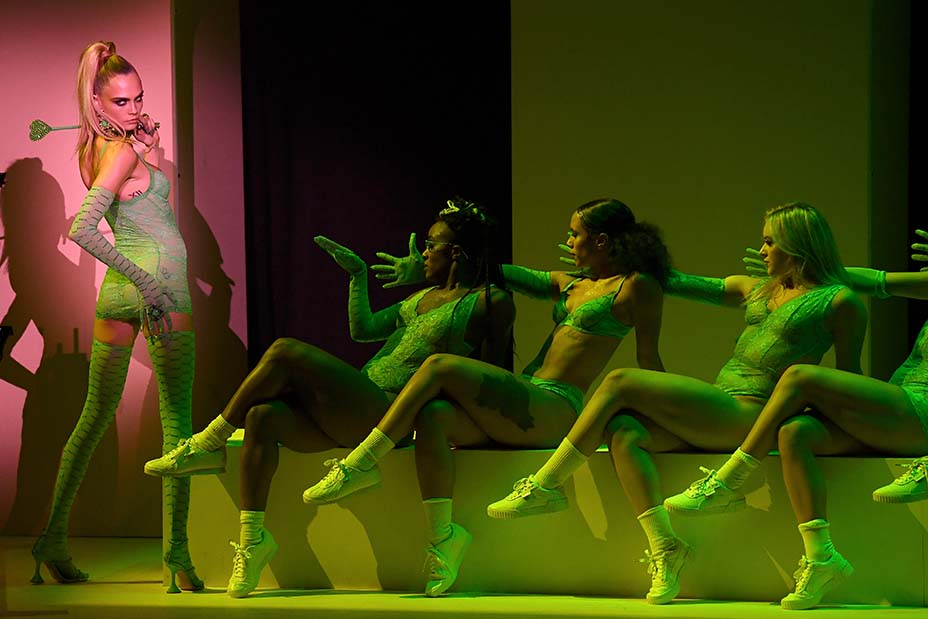 Comedian and 2 Dope Queens star Phoebe Robinson agreed: “Rihanna brings an element of cool, and I think [Savage x Fenty] is so inclusive in a way that feels organic and genuine, so everyone feels welcome and appreciated. [Victoria’s Secret] better watch out, because she’s got it going on. I think it’s great because so many people struggle to feel special or beautiful and in fashion. And I think she’s like, ‘You’re all amazing so you should all be able to wear whatever I’m wearing.’ And I think a lot of women appreciate that.”

Rihanna’s long-time friend ASAP Ferg said that he was proud to “see her growth, taking over music and now the fashion space, being the first black woman at LVMH, having her own house, her own makeup, doing the clothes and really nailing it.” Adding that he would like her to make him a lace do-rag, he continued: “She represents culture. She represents being innovative. She represents taking sexy to new heights. She’s definitely going for Victoria’s Secret: She’s giving us a whole Super Bowl performance in there!”

Post-show, Kehlani tweeted, “That was the most sexy, powerful, inclusive, boss ass fashion show I’ve ever been to in my LIFE.”

Quincy Brown was there to support his brother, Christian Combs, who walked in the show and whom he has teamed up with for the first time on a new single, “Options,” dropping soon. Brown said, “I think Rihanna’s the queen of teasing everything, whether it’s new music coming, or fashion or beauty. You can tell that a lot has gone into this. It’s just one of those Rihanna stunts!”

Rihanna is credited as artistic director and executive producer (along with PRODJECT and Endeavor Content) of the over-the-top event, which will be exclusively streamed with behind-the-scenes footage on Amazon Prime Video in more than 200 countries and territories starting Friday, Sept. 20. Access was limited, Rihanna skipped the red carpet, and guests’ cellphones and electronic devices were put on lockdown Tuesday, due to the taping.

A new Savage x Fenty collection of panties, bras, leggings, slips, bodysuits and logo shorts and leggings (in inclusive sizing from XS to 3X, 32A to 42H) dropped just prior to the show at amazon.com/savagexfenty, with more extensive offerings at savagex.com. 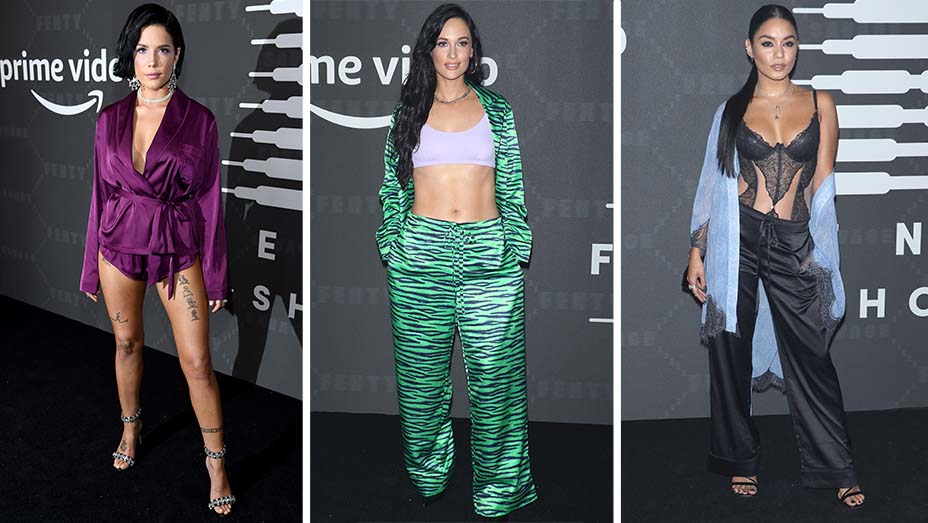