This weekend, Jeremy Scott’s runway was, as the saying goes, awash in “controversy.” The L.A.-based designer emblazoned his co-ed men’s and women’s collection with cheeky tabloid headlines and block-letter buzzwords in graphic black and white with the help of artist Aleksandra Mir.  (The only exception was a foray into black and blue during the denim section.)

“Controversy is all we have now,” the designer told The Hollywood Reporter backstage. “We live in a constant state of click-bait, screaming headlines and ‘fake news.’ People are always at each other’s throats.”

Nonetheless, Scott managed to work his theme into an appealingly inventive and complete wardrobe, from trench coats to tutus, T-shirts to tailcoats. A tall bereted brute in a moto jacket and matching leather pants spouting a welter of giant New York Daily News-style headlines got an enthusiastic “Yas!’ from somewhere in the front row. And a slinky, Swarovski-crystal mesh mini at the finale lived up to its blaring tabloid declaration: “BABY, IT’S HOT.”

Yet the designer hasn’t completely lost his sense of hope, what with one of his printed tulle prom dresses proclaiming, “THE END IS NOT NEAR,” and there was room for some guarded — and well-dressed — optimism. Or as he put it after the show, “It can’t last forever. Something has to explode or implode or burn out.” 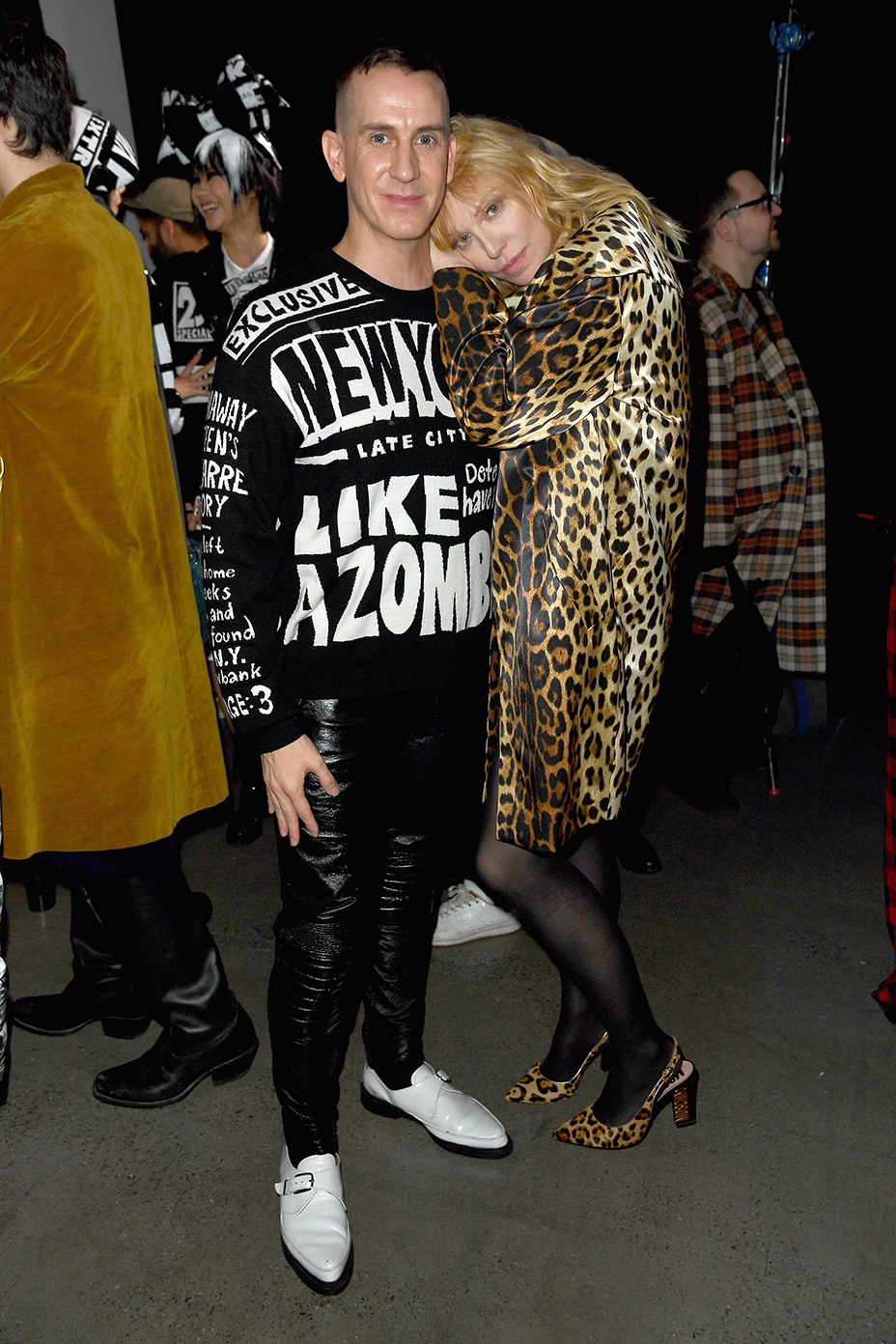 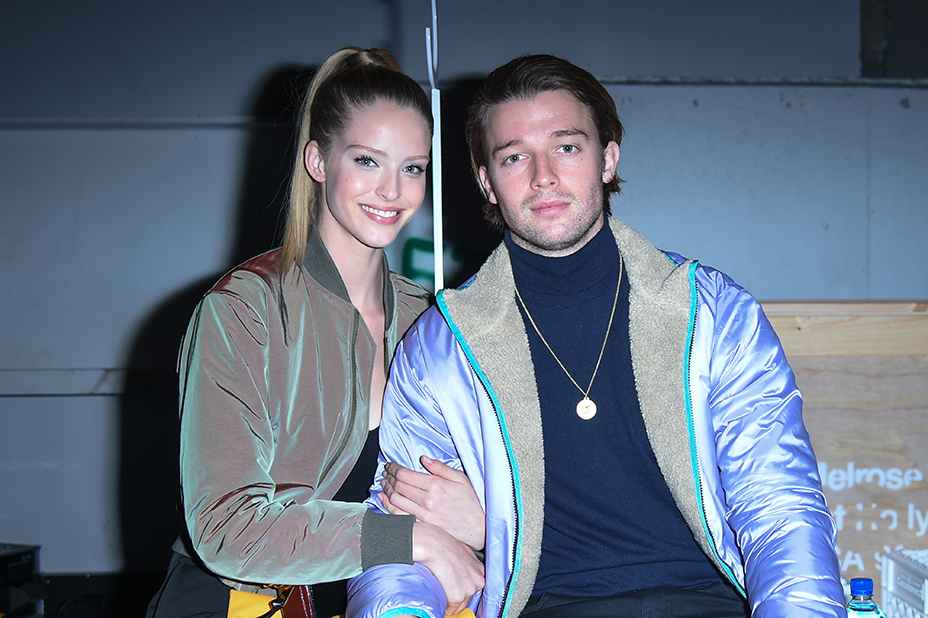 In the same DIY spirit, they were sitting in the shadow of a framed-up structure that the designer likened to an unfinished dream home. Yet there was nothing at all unrefined about this collection, as the models passed through that roughed-in box and onto the runway. L.A.’s much-admired scion of streetwear did a bit of an about-face and turned out beautifully tailored looks such as matching his-and-hers camel pea coats paired with white jeans. A mélange-y tweed bomber on one of the guys and a black denim mini with extended shoulders and white seaming for her looked sharp. 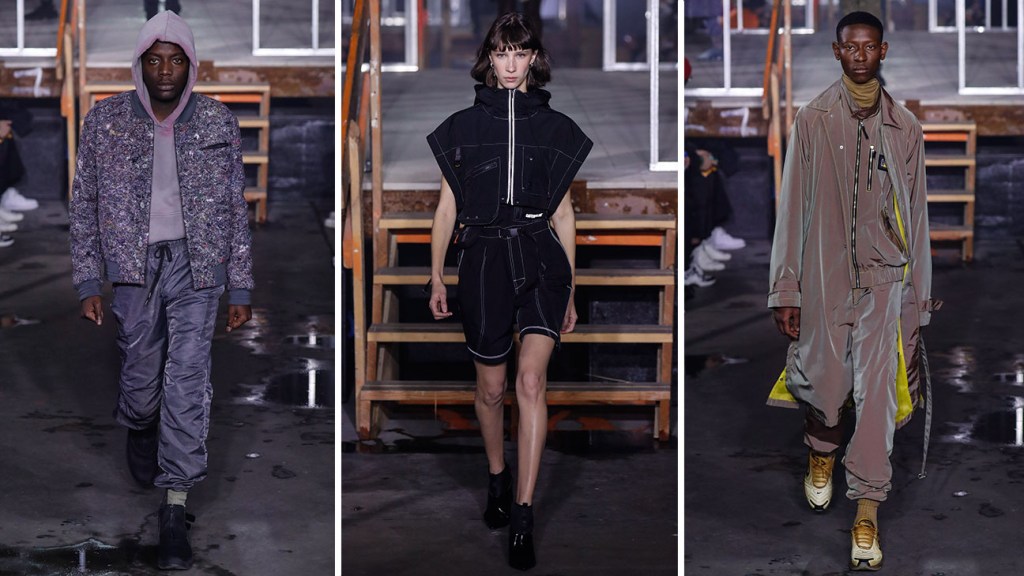 Of course, there were versions of all his popular signature sweatshirt hoodies and military nylon jackets as well as fleecy zip-ups layered over matching vests, a look that will certainly play with his young fans from Paris to Petaluma. He also unfurled a new version of his Icon sneaker in a collab with LeBron James, kitted out in tan and gold-tinged tooled leather.

Elliott teamed up with sponsor Lexus on a snowy white auto on display, complete with blindingly white “sneaker” tires — a takeoff on his signature Nike AF1. Nearby, sprouting out of wood packing crates, there were more versions of that classic pair of kicks as interpreted by West Coast artists Actual Source, Matt McCormick, Hassan Rahim and Young Jake that had guests milling around the thronged afterparty, bidding on all to benefit Inner-City Arts, the organization devoted to underserved youth in Los Angeles.

Away from the runway, the designer had some other construction in mind, as over the weekend he announced plans to open his first flagship store on Melrose Avenue, where some of the items from the Spring show will be available exclusively.

Earlier in the evening, Francesco Ragazzi brought his retail-smash Palm Angels collection to Manhattan for the first time to near-riotous results on the street outside the show. Ragazzi normally shows in his hometown of Milan, but considers himself an Angeleno by disposition, having spent his formative years in the city, as he often puts it, skating and smoking. Not unexpectedly, some of the attendees were openly toking up during the show, which started off with an extended light spectacular that lit up the neo-classical statues on display in glass cubes. 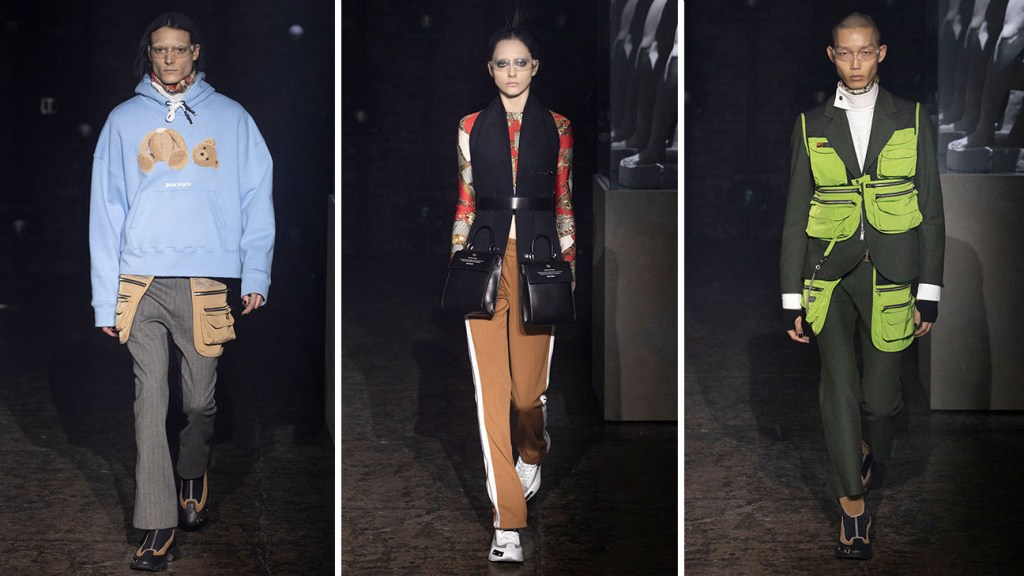 Like Elliott, Ragazzi is moving beyond streetwear, notably with some sleek sci-fi-esque leathers. But the emphasis on utility, with multiple belt bags stitched together into skirts or integrated into tailored coats and jackets. In another nod to increasingly on-the-go lifestyles (and the accompanying need for multiple totes), models clutched leather handbags in twos, and one scarf even incorporated a pair of handbags. Ragazzi’s fond of the visual pun, and a cozy blue sweatshirt was printed with the image of a teddy bear, albeit a decapitated one.

But whatever; then it was time to party, as Presley and Kaia Gerber, Luka Sabbat and Young Paris milled about and Gunna took the stage.