A trend of ‘70s influences has quickly emerged at the fall 2019 New York Fashion Week collections. And for most attendees, this renewed exploration of the decade known for embracing feminism is more than welcome. Conversations at shows and parties have been peppered with copious mentions of Kamala Harris, Beto O’Rourke and Cory Booker, as well as spirited debates on who should be slotted in as president vs. vp on the Democratic ticket, and the related optimism that comes with planning for the future, or at least as far as November 2020.

With that in mind, it seems wholly appropriate to salute in a sartorial sense the decade in which women found their voice both at home and in the workplace. Clothes imbued with the spirit of the ‘70s also tend to make us happy, as they balance that era’s mix of confidence, femininity, a touch of tailoring and yes, comfort, courtesy of knit and jersey dressing.

That was true of Nicola Glass’s fall collection on Friday afternoon for Kate Spade New York, which offered everything from high-waisted trousers as one-half of jewel-toned pantsuits (the key trend thus far for fall), knit pieces that were equal parts relaxed and sexy, and wrap dresses that looked apropos for walking into dinner or Studio 54. 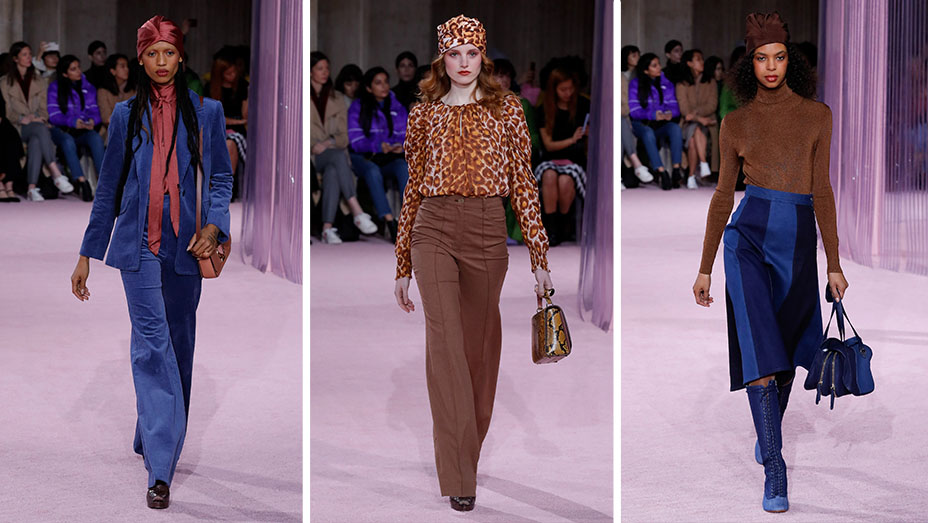 “There was definitely a little bit of a ‘70s vibe, but trying to take it to a new, modern direction,” Glass told The Hollywood Reporter backstage after the show. “I do think a high-waisted silhouette is quite elegant, for example, and it elongates you. But I was really thinking of this idea of soft glamour, and I was imagining raiding an insanely glamorous woman’s closet, and all the eclectic things you might find in there to take and make your own.”

Among the front-row attendees, Maggie Gyllenhaal is on board for a ‘70s theme, regardless of season. “I was just in the [Kate Spade] shop the other day and was looking for what I was going to wear here, and everything had a sort of a late-‘70s kind of style, which is something I’m naturally drawn to,” she told THR.

Her appearance is Gyllenhaal’s only scheduled event for New York Fashion Week, as she starts shooting the third season of HBO’s The Deuce on Monday. “I’ve never done an ongoing project before The Deuce; coming back for the second season felt really strange, being back with the same people and the same character,” Gyllenhaal said. “But coming back for the third season, it feels so good. It’s like being a part of a repertory company: We all know each other and really respect each other. The women in particular, our characters have shifted and changed so much in the four years since we did the pilot; that’s been so great to watch and experience.” 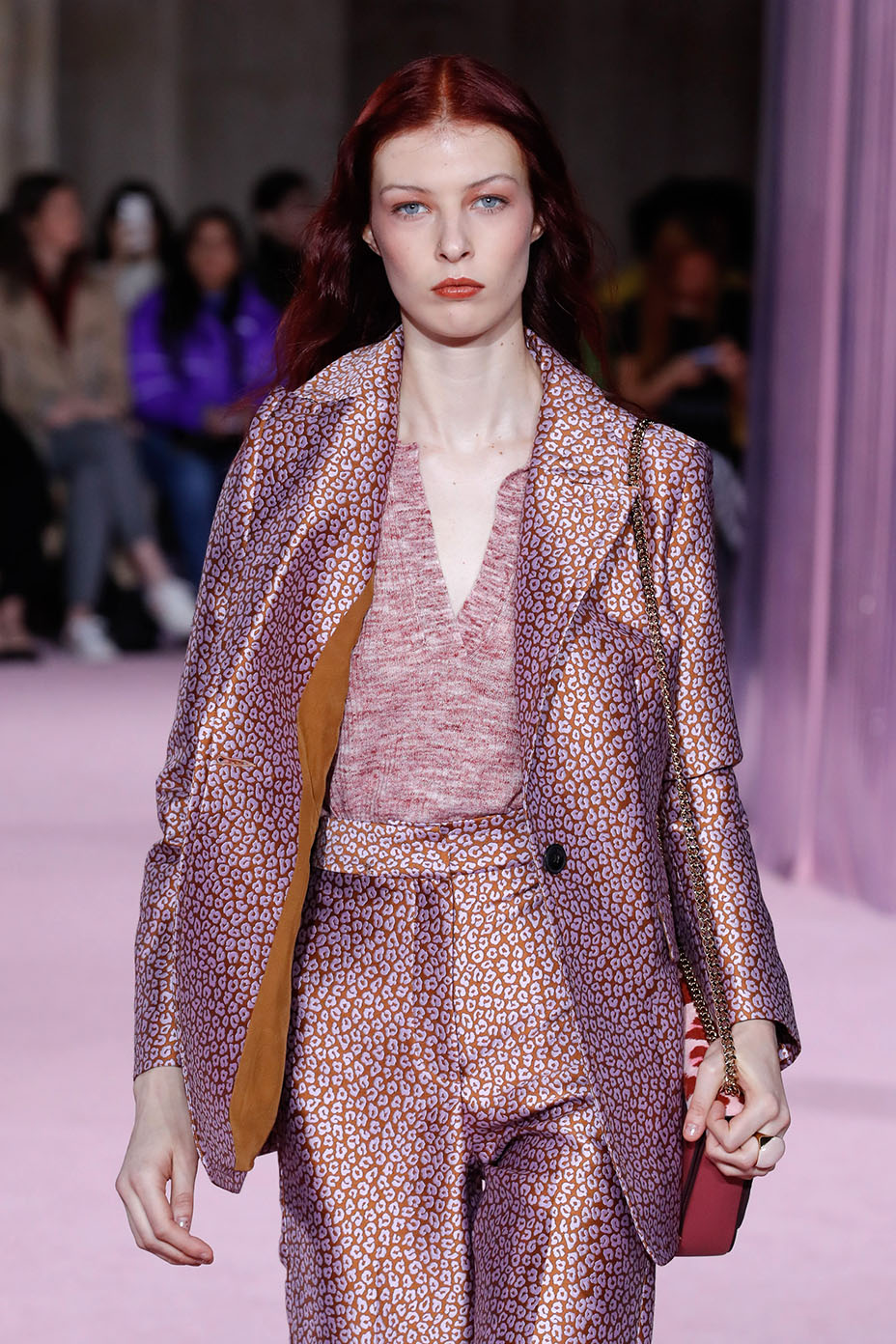 Also on the front row: KiKi Layne, Julia Garner and Sadie Sink, all of whom appear in the spring campaign for Kate Spade New York. A castmember of If Beale Street Could Talk — up for three Oscar nominations: best original score for Nicholas Britell, best adapted screenplay for Barry Jenkins, and best supporting actress for Regina King — Layne called the brand “fun, sophisticated and classic, perfect for those moments when you know you’ve got work to do, but you still want to look cute.”

Garner, currently appearing in Netflix’s Ozark, agreed. “I’m born and raised in New York, so I’m always going to think of Kate Spade as an iconic New York brand,” she said. “Plus I am such a bag girl, and I appreciate what Nicola has done. She’s keeping elements fans love, but mixing it in her own way. She’s not completely changing it; she’s keeping it modern and cool.” 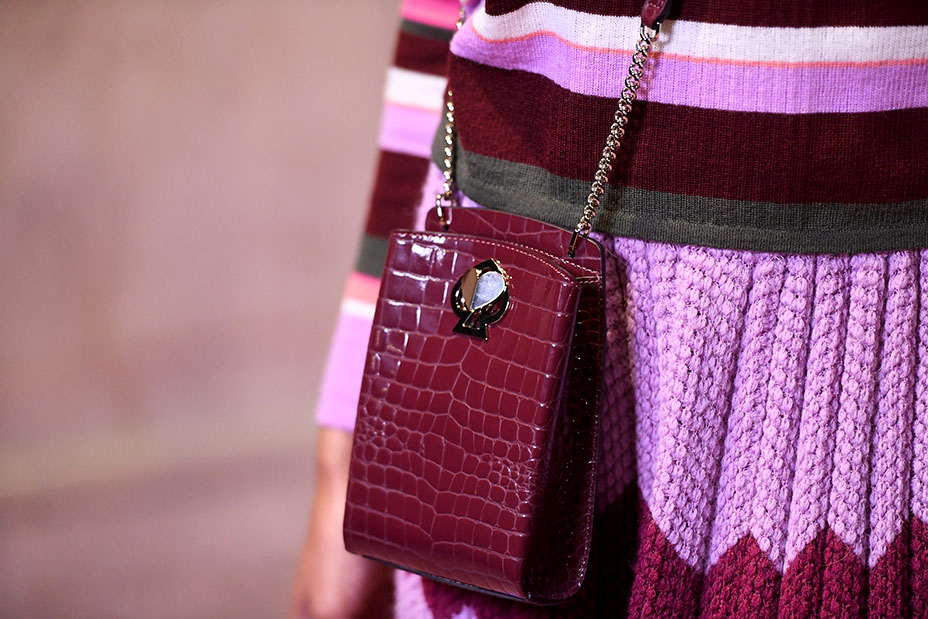 Indeed, at Kate Spade New York, the conversation always tends to circle back on the bags. For fall, Glass, who signed on as creative director of the brand in 2017, is combining practicality with posh details: Several models were sent out on the runway carrying more than one style, typically a mini bag and a larger tote, while Sink was among those seen on the event’s red carpet with the new top-handle Romy bag, which is crafted in a high-shine, croc-embossed leather and doubles as a cross-body bag.

“Bags for me are such an emotional buy, and [the Romy] is such a perfect combination of scale and high shine, and a modern way to do a croc emboss,” Glass said. “But these days you have a tote to schlep things around, but you also need a smaller bag for your phone and other things to keep nearby. What we did on the runway was really just a reflection of what real women do today.”