It may have been positively arctic in New York City on Thursday, but no snowstorm could stop the fashion industry from heading outside (all bundled up, of course) to attend the first day of New York Fashion Week shows, where designers were immediately and noticeably inspired by the political climate.

The day started off with a tranquil show, courtesy of Brock. Designers and Newport Beach, Calif.-based husband and wife Kristopher Brock and Laura Vassar, who won the CFDA/Vogue Fashion Fund in November, stuck to their signature old-school romance with puff-shoulder ruched dresses, tweed dresses and skirts and fur neck-warmers paired with a number of jewel-toned evening looks.

A standout from the collection was an off-the-shoulder lavender blurred-floral-print gown, perfect for upcoming red-carpet events. Stylist Cristina Ehrlich was spotted at the show, after all. Perhaps we’ll see one of her A-list clients — like Brie Larson, Allison Williams or Priyanka Chopra — in that dress next. 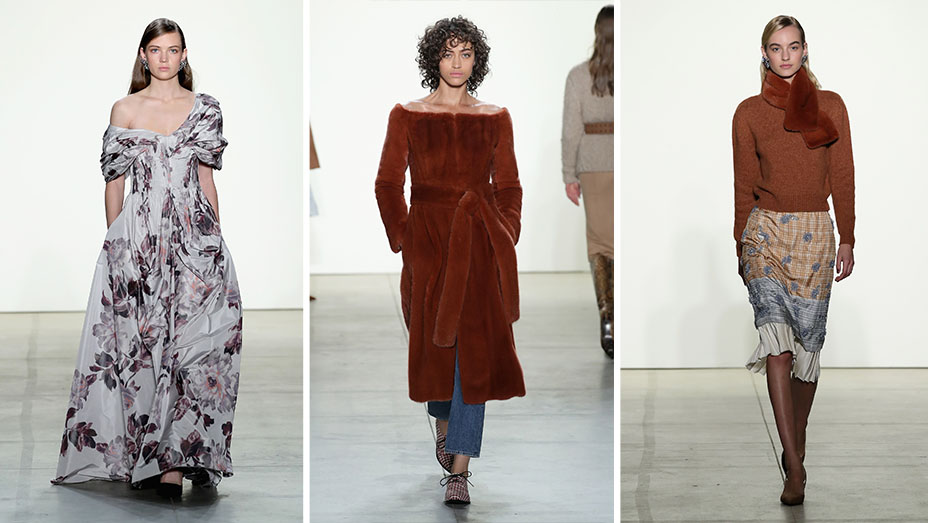 On the edgier side, there was Adeam, a New York-based label founded by Japanese designer Hanako Maeda in 2012. Maeda, who grew up in Tokyo, was influenced by Gothic Lolita, a fashion subculture that originated in the late 1990s in Harajuku that’s based on Victorian and Edwardian clothing, with elements borrowed from punk-rock culture.

Indeed, that translated to Victorian collar tops, pearl-embellished jacket sleeves, puffed-sleeve shirtdresses and deconstructed gowns made of lace and ruffles. 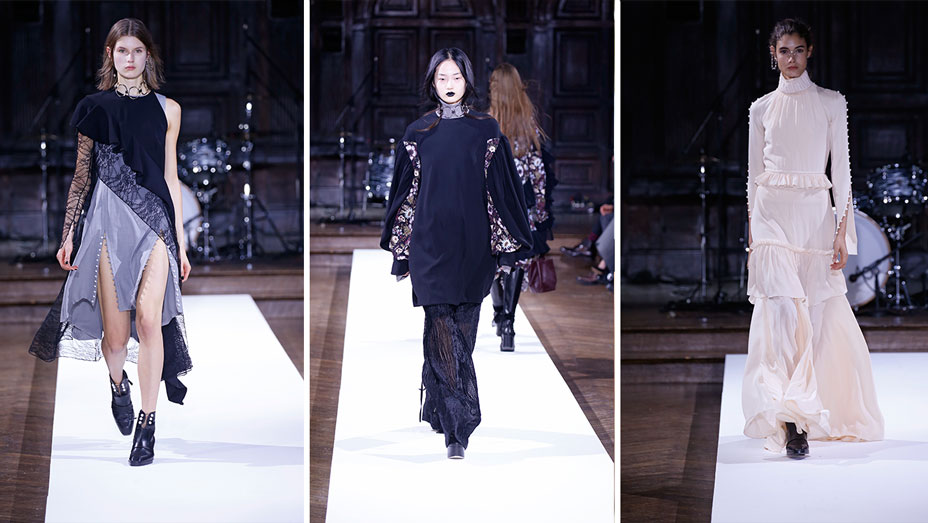 “I was really drawn to that idea because all the girls are dressing as a way of self-expression, and each girl’s style is very different,” Maeda told The Hollywood Reporter backstage. “As a woman and as someone who’s from Japan, but also lives in New York, I think it’s important to celebrate differences and the strength in women.” No wonder Taylor Schilling, Kathryn Hahn and Kerry Washington are among Hollywood’s leading ladies who have worn the Adeam line recently.

The show was capped off by a female drummer and Maeda’s friend Kazka Shido, who rocked out to a solo drum session that would give Blink-182’s Travis Barker a run for his money. 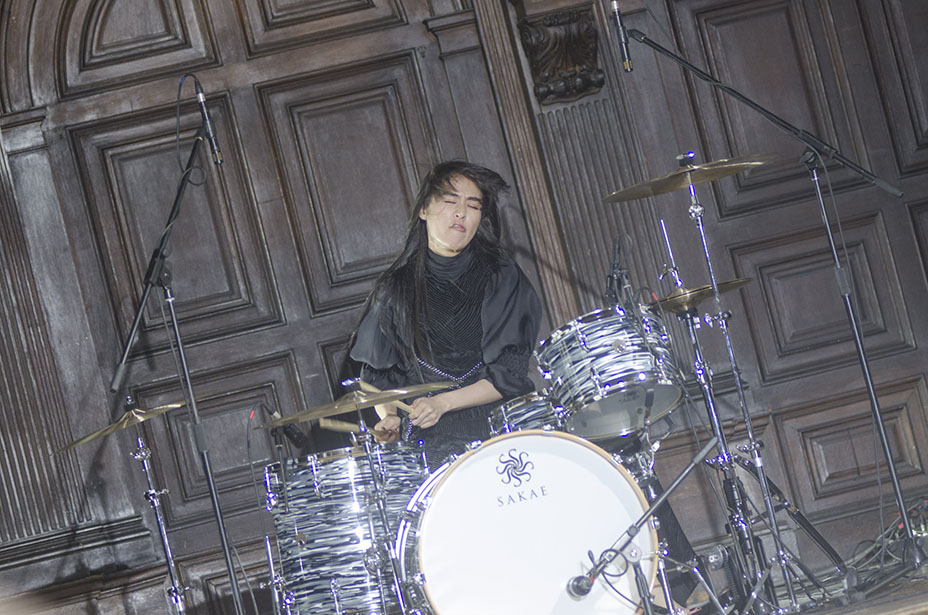 Over at boho designer Ulla Johnson’s runway presentation, guests were provided some respite from the cold as they were welcomed with a floral landscape that felt like springtime.

The designer’s collection “was born of and for tumultuous times,” according to show notes. Given today’s contentious political climate, Johnson wanted to “embark on an exploration of what femininity or the idea of what a lady means, with respect to being in power or a powerful woman,” she explained to THR.

The answer was an oversize brocade puffer jacket, a black velvet pantsuit and camel velvet jumpsuit, a ruffled copper lamé dress and a hand-pleated military green jacket with wide-leg trousers. “It’s this pairing of paradigms of what is feminine, what is masculine and kind of recasting them all with a language that felt very much our own,” added Johnson, who attended the Women’s March in D.C. in January.

“I think, in some ways, people feel afraid to indulge in fantasy and beauty right now, but I think it’s important for us to hold on to joy,” she said. “Joy, happiness, beauty, togetherness — these things are all meaningful, and we need to continue to find the threads that motivate and bring us together.” 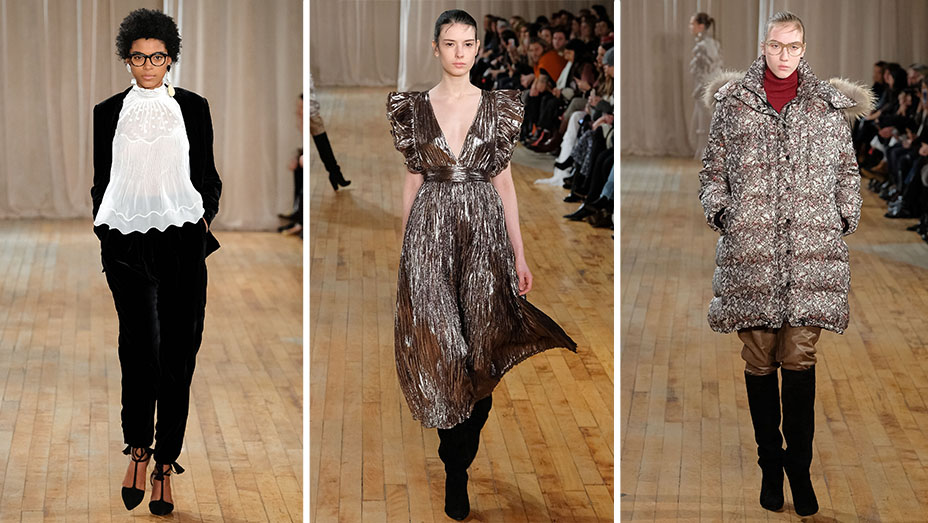 The front row was also starry, with Gwyneth Paltrow keeping warm over a lacy something. And who knows how much Jenner, the current face of the brand, must have earned with the photo she posted on Instagram of her look from the show for her 73 million-plus followers to check out. 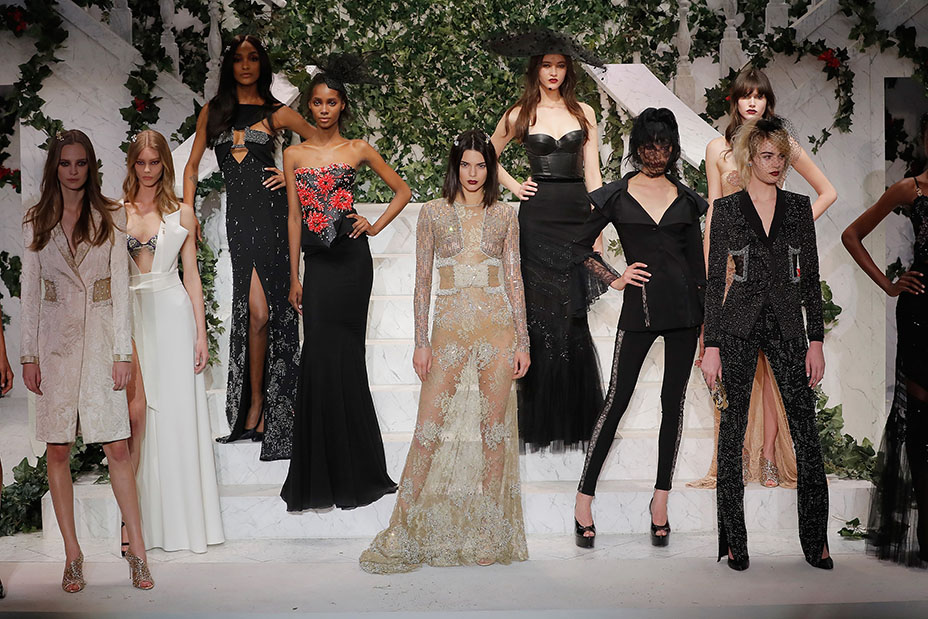 As for the spring 2017 collection, creative director Julia Haart (it was her her second collection for La Perla) looked at the British garden through the eyes of painters throughout history (from Rachel Ruysch in the Baroque era to American modernist Georgia O’Keeffe). The inspiration was reflected in a floral motif that ran through lingerie-inspired pieces, on a flowered sequin dress, a pantsuit with rose embroideries and a mixed-floral-print romper.

As she did last season, Haart reiterated the importance of comfort.

“The first thing I want to liberate women from is discomfort. I want to get rid of this notion that you can [either] be beautiful or you can be comfortable,” expressed Haart, who added that all the pieces are made with stretch and built-in bras. “I want women to enjoy being feminine and celebrate their curves. Women should feel free to dress however they want.”