The current edition of New York Fashion Week has largely focused on entertainment, and fashion designer Tommy Hilfiger is considered something of an O.G. in that arena, having kicked off his TommyNow experiential shows with supermodel Gigi Hadid in fall 2016. For the second and final Tommy x Zendaya TommyNow fashion show (held at the Apollo Theater in Harlem on Sunday evening (Sept. 8) as an immersive VR digital experience for global audiences), Hilfiger and his actress-singer-designer business partner brought down the house with a fashion show-musical extravaganza.

“I think that [experiential] is everything because if you’re not in the digital social media world creating great experiences, you fall behind,” Hilfiger told The Hollywood Reporter. “In order to stay ahead, you need the media-entertainment quotient mixed with fashion.”

Staged at the famed theater, which dates back to 1913, the show hit the street with a bona fide set on the backlot (fit for a Broadway stage) that recreated New York City brownstone stoops as the backdrop for a musical dance session, complete with boombox props. In the mix were musicians on saxophone and piano, while a retro convertible with THZ Apollo license plates seated a suite of violinists and a second convertible wheeled in a troupe of singers.

The talent came courtesy of Vy Higginsen’s Harlem-based Mama Foundation for the Arts, which benefits from proceeds of sales of the collection via the Tommy x Zendaya bus, parked outside the venue prior to the event. The bus will pop up at the Win Lot in Soho at Lafayette Street and East Houston on Friday, Sept. 13 and Saturday, Sept. 14. 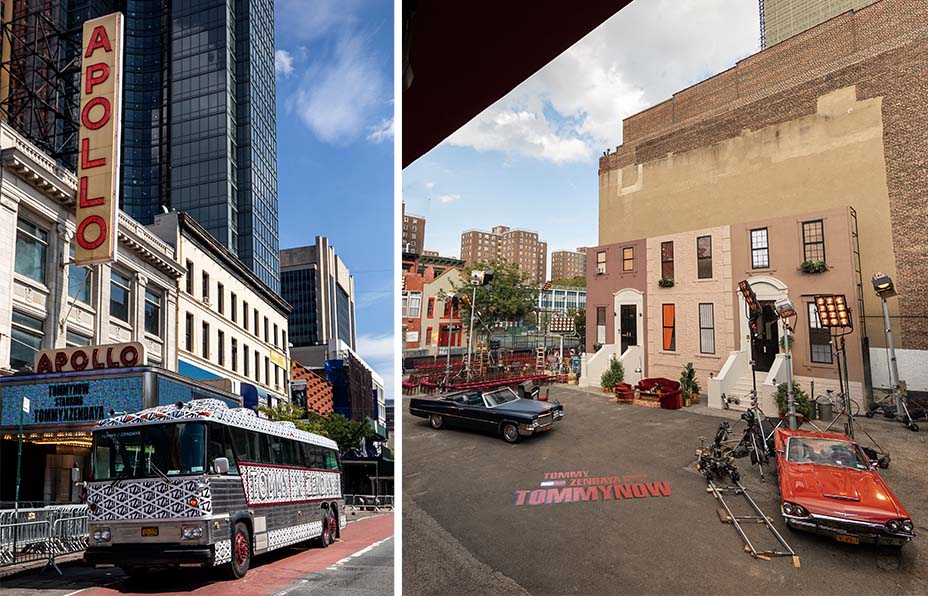 Questioned about the significance of the venue, 23-year-old Zendaya (wearing a snake-print leather jacket and matching trousers and boots from the collaboration line) said: “I mean, it’s the Apollo, right? I’ve grown up my entire life hearing, ‘Live at the Apollo!’ Because of the history and the cultural significance of what this building represents, I’ve always wanted to perform here or just come here and see a show! So it’s kind of crazy that I’m here, actually putting on a show at the Apollo! We’ve reworked the space, but we also wanted to pay tribute and homage to all of the creatives that have been here before and have really paved the way for me to have my show here, so it’s really exciting!” 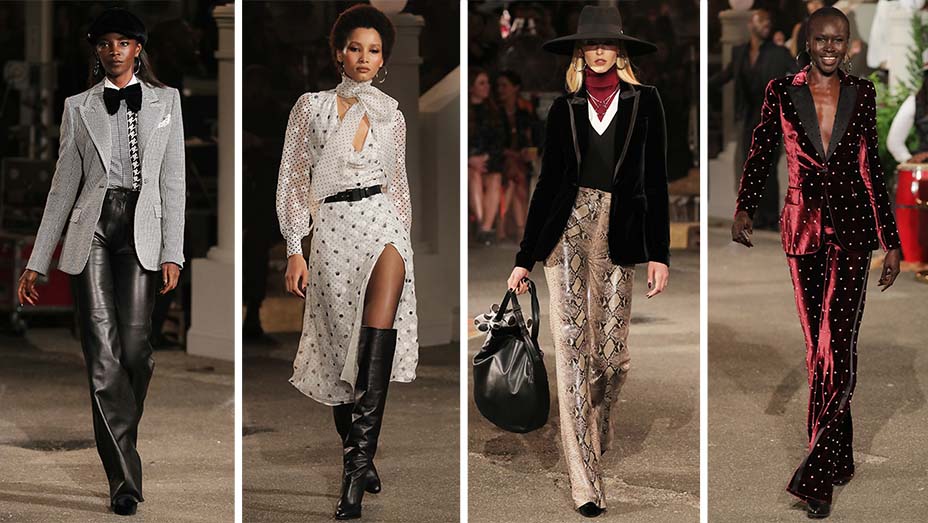 In the audience were supermodel sisters Gigi and Bella Hadid, Zendaya’s Euphoria castmate Hunter Schafer, Indya Moore, Sydney Sweeney, Jameela Jamil, Skai Jackson, H.E.R., Meghan Trainor and Kehlani. A cast of 59 models in a diverse range of ages, ethnicities and body types walked the makeshift runway in the new “see now, buy now” fall 2019 collection, unveiled in late August. They circled the perimeter to a soundtrack of ‘70s songs, such as Bob & Earl’s “Harlem Shuffle” and Aretha Franklin’s “Respect” and “Rock Steady,” which keyed into the collection’s era of inspiration.

A nod to the ‘70s, the polished 134-piece “power dressing” collection ranges from flowy midi-dresses to tailored suiting in a mash-up of polka dots, plaids, stripes, houndstooth, snake and leopard prints and a zodiac pattern. The line includes apparel, swimwear, lingerie, sleepwear, outerwear, jewelry and watches, platform heels, stiletto boots, sandals, a scarf, hats, bags and sunglasses. Ten styles feature Tommy Adaptive modifications, part of the brand’s line that accommodates people living with disabilities, and many leaders in that community were present on the red carpet and in the front row at the show.

Hilfiger told THR that Diana Ross and Bianca Jagger were among the “iconic women” who served as design inspiration, while Zendaya shouted out Donna Summer as a figure on many of her mood boards. 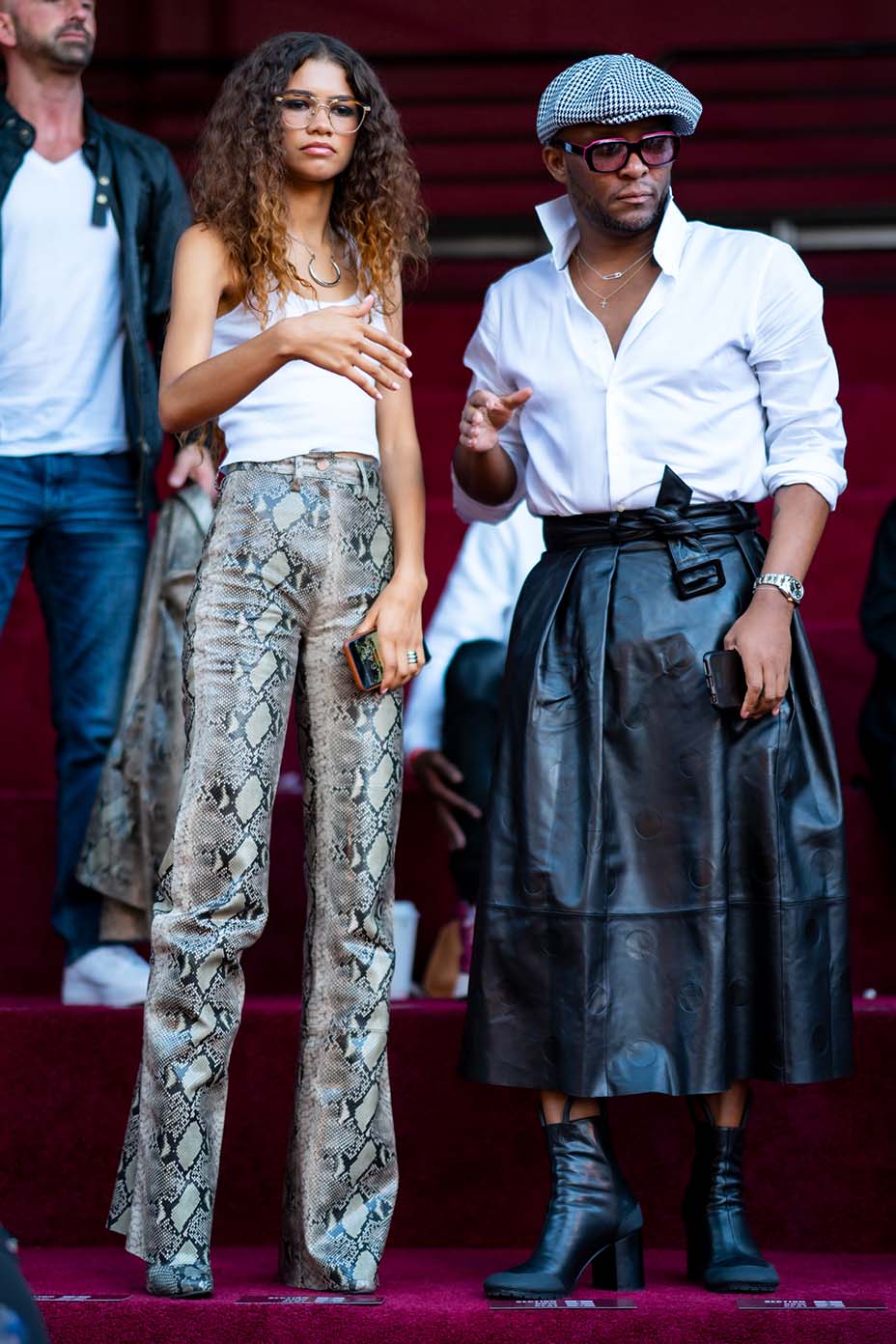 As for her biggest business takeaway from the two-year partnership with Hilfiger, Zendaya said, “I think the number one thing I’ve learned is, honestly, the reason why [Tommy Hilfiger] has had this incredibly long, successful career is because of his ability to always change, innovate, learn and grow. He’s always open to new ideas. The fact that he was so willing to give me the keys to his business was incredible and is really a testament to the brand that he has created. I hope to be that way. I hope to continue to grow and learn and never feel like I know everything, because that’s the only way to last forever.”

Schafer, wearing the zodiac-print maxi dress from the collection, told THR on the red carpet: “I’m excited because Z’s my co-star, so I want to come to support. Z’s talented as hell in all of the regions, so I’m just excited to see what she’s done.”

Jamil also stopped on the red carpet ahead of the show to speak to THR: “I’m so glad that I get to wear the new collection; I love it even more than I loved last year, and I didn’t think that was possible. I can’t wait to see who she’s chosen to walk down the runway. Last year it was super diverse, and I want to see more of that. I’m sure she will. I support that woman to the end. I think she’s just so cool in every single way. She’s really an important young celebrity.”

The Good Place actress said that that DJing has been keeping her busy: “I haven’t really been to many fashion shows, I haven’t had time, but I’ve been enjoying DJing again. That used to be my job before I became an actor; I was a DJ for 10 years, and so I’m getting back into it, which is fun. I DJed at the ELLE [Women In Music] party [on Sept. 5]! I’m treating New York as holiday. Fashion week can sometimes get a bit stressful, but if there was any show I wanted to be at it was this one!”