In Australia over the weekend, Olivia Newton-John toured the cancer wellness and research center she founded in 2014 and, while doing so, created a joyful moment for a few patients, courtesy of a certain film costume.

“We flew the Grease jacket and pants over from America, and several women there who are going through cancer treatment tried on the jacket,” Newton-John tells The Hollywood Reporter. “Their faces just lit up. It was so wonderful to bring people joy with a simple thing like that.”

First diagnosed with breast cancer in 1992, Newton-John is in the midst of her third battle with the disease after a lump was discovered at the base of her spine in 2018. But that’s not stopping the four-time Grammy winner from projects that include raising funds for the Olivia Newton-John Cancer Wellness & Research Centre, located in her hometown of Melbourne, Australia. On Saturday, Nov. 2, in Beverly Hills, the Grease jacket and pants will join roughly 500 other items for “Property From the Collection of Olivia Newton-John,” an auction featuring a variety of costumes, personal and touring wardrobe and other items, with proceeds from approximately 10 percent of the lots — including the Grease jacket and pants — benefiting the cancer center. 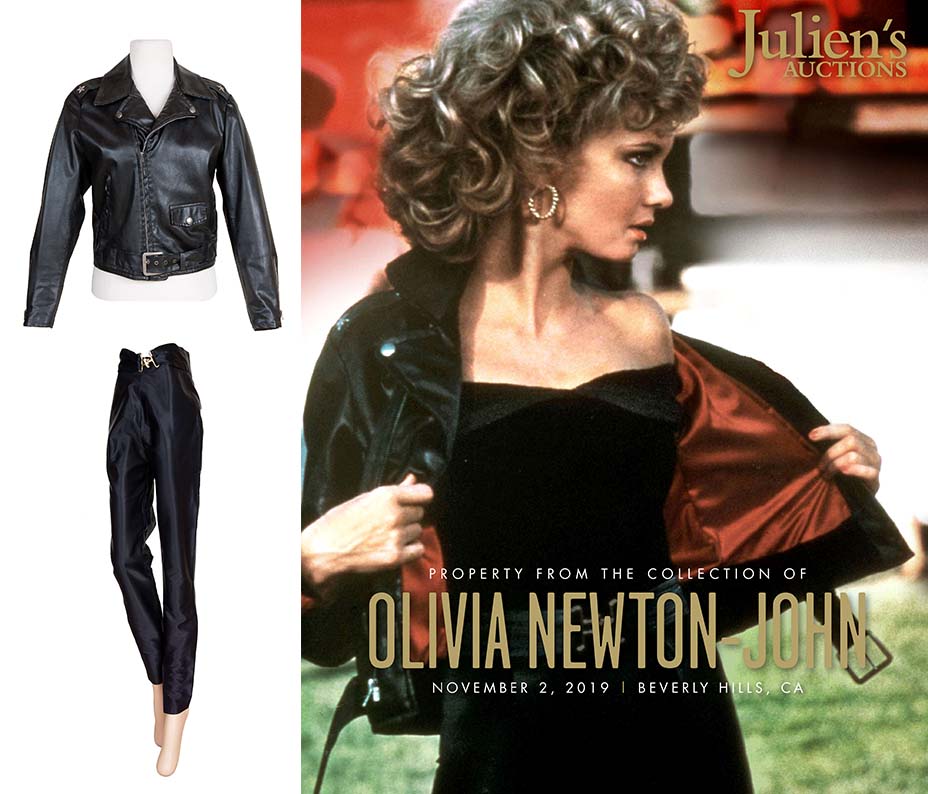 As Sandy in the 1978 film, Newton-John wears the black leather jacket and shiny, figure-hugging pants during the climactic final scene when Sandy transforms from good girl to vixen, and she and John Travolta’s Danny perform “You’re the One That I Want” and, with the rest of the cast, “We Go Together.” The film still ranks as a favorite among fans of all ages, while Newton-John’s costume has become one of the most identifiable in cinema history.

“Last year we had the idea to auction the costume to coincide with the 40th anniversary of Grease, so we reached out to Olivia,” explains Martin Nolan, executive director of the Culver City-based Julien’s Auctions. “Her treatment prevented her participation at that time, so we came back to her this past spring. As we continued to talk about it, we realized we could build an entire Olivia Newton-John auction. That really won her over, and it became a really fun project for all of us.”

“I’ve had the thought of auctioning the jacket for the last 10 years, and when we started talking about it, the whole world opened up,” Newton-John adds. “I’d only been thinking about the jacket and pants, but it also occurred to me that, heck, I can’t take this stuff with me. It should go to people who will enjoy it.”

In addition to the Grease costume, the sale will include a pair of boots Newton-John wore in 1980’s Xanadu, a minidress from the tour of her 1981 megahit “Physical,” a “Pink Ladies” jacket presented to her by the cast and crew of Grease and the pink gown she wore to the film’s 1978 premiere. “Over the years we had donated things to charities for their auctions, so there is a lot of stuff I no longer have — my roller skates from Xanadu, for example, those went to a charity,” Newton-John says. “But I’ve saved a lot of things over 40 years — not just costumes, but also Vegas outfits and tour outfits, my first saddle and bridle. It’s been a really fun journey putting this all together.”

With contributions to the cancer center in mind, Newton-John also reached out to several famous friends, including John Travolta, Keith Urban, Barry Gibb and Rebel Wilson, asking them to donate items to the sale. “Everybody I asked said yes,” Newton-John notes. “John donated one of his pilot’s caps, and we both signed my Grease script and the lyric sheets for ‘You’re the One That I Want,’ while Keith donated a beautiful signed guitar and Barry gave us the signed personal lyrics of a song we did together. It’s a wonderful variety of items, and I need to raise money for my cancer research center, so all of this has been a no-brainer for me.” 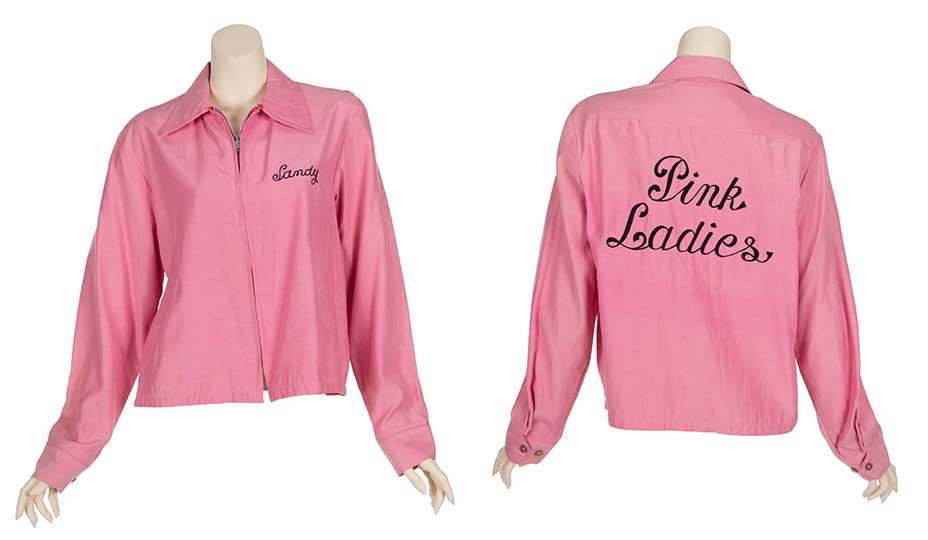 Nolan has set the auction estimate for the Grease jacket at between $100,000 and $200,000 and the pants at between $40,000 and $60,000, though he anticipates both may garner significantly higher winning bids. “This costume is an incredibly important piece of pop-culture history, and Olivia has taken great care of it, keeping it in climate-controlled storage, so it’s in excellent condition,” he says. “We could set an auction record for a pair of pants — in 2011 we set a record for a jacket when we sold Michael Jackson’s red leather Thriller jacket for $1.8 million, but Olivia’s jacket could go as high as $1 million.”

Newton-John has been intimately involved with every detail of the sale, Nolan adds, from curating the lots and overseeing each item description to writing a foreword for the auction catalog. “For me, personally, working on this particular project has been really special because of Olivia’s involvement,” Nolan says. “She also came into this incredibly well organized; over the years she had been maintaining her own catalog of her collection, with photographs and notes, which made our job so much easier. It’s so rare to have an archive like that available to us.”

Julien’s Auctions also is selling 200 copies of the auction catalog, signed by Newton-John, at $300 each, with 100 percent of those proceeds going to her cancer center. “They’re already selling like hotcakes,” Nolan says. “It’s a great way to make a direct contribution and also have a coffee-table book featuring all the items that document her life.” 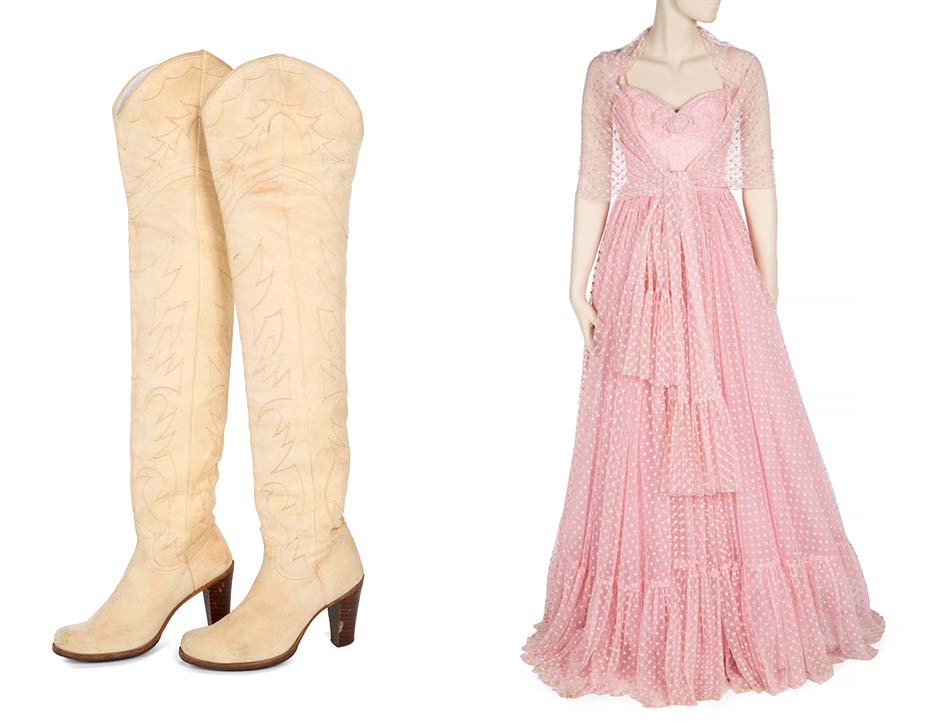 The lots will be open to the public for viewing, first in New York at the Hard Rock Café in Times Square from Thursday, Oct. 17, through Monday, Oct. 21, then in Beverly Hills at Julien’s Auctions, 257 N. Canon Drive, from Monday, Oct. 28, through Friday, Nov. 1. Newton-John also will make an appearance at an invitation-only reception Oct. 29, though she won’t attend the sale Nov. 2. “That would be too stressful,” she says.

“Olivia has been so pragmatic through every step of this project, and even as she’s been battling cancer, she just radiates hope and energy — she walks into a room, and it lights up,” says Nolan, who was the courier hand-carrying the Grease jacket and pants to Australia last week. “She had a really sweet moment with the jacket when she was giving it to patients to try on — she held it and said, ‘I get to hold my baby one more time.’”

Even as Newton-John possesses fond memories of her most famous costume, she says she’s ready for it and other pieces in her collection to enjoy new homes. “I’m never going to wear them, and a lot of museums and collectors around the world are showing interest,” she says. “Otherwise these things would be sitting in a closet, but this way, the money they raise can help someone. And it’ll make me happy knowing people are enjoying them.”