“For Leo and Brad, Hollywood Boulevard made them pretty giddy,” recalls production designer Barbara Ling of stars DiCaprio and Pitt’s reaction to Once Upon a Time in Hollywood‘s re-creation of a full block of 1969 storefronts: The Pussycat Theater, the Vogue Theater, Peaches Records, a Thom McAn shoe store, an Orange Julius, tattoo parlors, TV repair shops, peep show emporiums and even the Larry Edmunds Bookshop were all so realistic that tourists tried to patronize them during the shoot and Angelenos pleaded, “Can’t you leave it?” Ling recalls.

Actress Sydney Sweeney, who plays a hitchhiking hippie girl, filmed at the historic corner of Hollywood Boulevard and Vine Street. “A few of the buildings had been repainted the day before, and that night it rained. Everything still looked incredible, though!” she recalls. “The cars were switched out to old Chevys and buses, and once the extras were placed, it felt like we were stepping back into old Hollywood.”

Historian and L.A. native Alison Martino, founder of the Vintage Los Angeles social media pages, recalls becoming very emotional watching filming on the street in the summer of 2018. “I felt that there’s no way in my lifetime that I will ever see this happen again. You have now experienced what 1969 looked like on Hollywood Boulevard,” she says.

“Every few days was a whole new set that just kept immersing you in this world,” Ling says of her first collaboration with Quentin Tarantino, whose latest film — set in the summer of the gruesome Manson Family murders that shocked the city — made use of several iconic destinations and eateries across L.A. 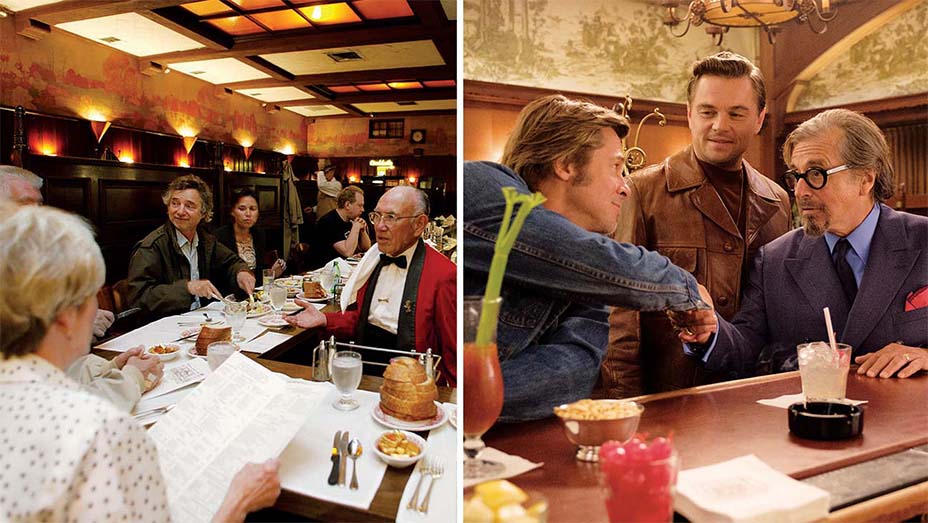 “Quentin’s been a longtime patron,” says Mark Echeverria, the fourth-generation owner of the venerable restaurant that celebrates 100 years in September. “When he wanted to make this restaurant a pivotal part of the movie, it really meant a lot.”

After his staff (many of whom cameo in the film) helped find china and menus from the era, Echeverria enjoyed watching several of the restaurant’s patrons — including DiCaprio, Pitt and Al Pacino — at work for the first time. “Pretty much everybody who was in that scene — and also who was part of the production — frequents the restaurant,” he says. “Typically we see them when they’re just coming in and hanging out and themselves, but to see somebody in their professional environment and having it be in our restaurant was pretty cool.”

Fences had to be mended with the ArcLight after Tarantino was miffed when The Hateful Eight was bumped in 2015 to extend the run of Star Wars: The Force Awakens. “There was a little bit of bad blood about that, but the Cinerama Dome, it’s just classic, and he could not pass up that,” says location manager Rick Schuler.

The Dome required minimal effort to reset time back to the premiere of the disaster flick Krakatoa, East of Java. “If you stay tight on it, it still retains everything that was there. We put a lot of work into changing the bulbs and getting it so we could turn on certain parts of the marquee.” Buildings around the Dome needed erasure, Schuler adds. “Quentin knew from the beginning that to sell that, he’d digitally remove the ArcLight and the buildings that almost overtake it.In 1969 it was surrounded by parking lots, this beautiful stand-alone.”

Daren Metropoulos, the current owner of what for decades was famous around the world as Hugh Hefner’s fantasy estate in Holmby Hills, was in the midst of extensive renovations since taking over the property following Hefner’s passing in 2017. A face-to-face with Tarantino was required to get him on board. “After meeting with Mr. Tarantino, he knew the pair could create a unique partnership and work well together,” says a spokesperson for Metropoulos, who scored an associate producer credit on the film.

Even though the movie cheats the timeline a bit (Hefner didn’t purchase the Mansion until 1971), “it was very fun to have that and have it back to its glory, in a way,” says Ling, who loved watching the actors embrace the illusion. “You’re like a fly on the wall, wandering through with these fantastic outfits with the people who are the actors of that time.”

Once of those was actress Rebecca Rittenhouse, who was outfitted as Michelle Phillips of the Mamas and the Papas, and couldn’t resist exploring some of the Mansion’s more famous nooks and crannies. “The grotto, that’s legendary, right?” she says with a laugh. “Thinking about the parties that must have happened there over the course of the years, it’s just wild. We kept sitting there thinking, ‘If these walls could talk, what would they say?'”

A fixture at its Beverly Boulevard location since 1951, the Mexican eatery has long been a Tarantino favorite. “I think he went there when he was a kid and he still goes there from time to time,” says Schuler, who notes that the restaurant also occupies a particular place in Sharon Tate’s history that’s explored in the film. “It was a show of touching upon the real story.”

The spot is virtually untouched by time inside and out. “All you need to really do to dress El Coyote is put some vintage cars in front of it — now it’s suddenly 1969,” says historian Martino, who watched classic autos line up outside during filming. “But it’s the same place. Everything about it looks the same.”

The 63-year-old Mexican restaurant on Ventura Boulevard in Sherman Oaks where DiCaprio and Pitt’s characters get drunk together is yet another personal hangout for Tarantino. “Quentin’s really into margaritas, and the owner and him were sharing recipes,” recalls Schuler. “He shared his recipe with her, and then she honored him by coming up with The Tarantino. So you can go to Casa Vega now and order a Tarantino based on his mixology.”

For the enclave where Sharon Tate and Roman Polanski live next door to DiCaprio’s Rick Dalton, Schuler faced a challenge: One resident on the private road vowed to fight the shoot tooth and nail. “I did what I do best as a location manager, which is to say, ‘OK, I hear you,'” recalls Schuler. “‘And now I’m going to go quietly, and get altogether nine neighbors on board,’ which I did. I think he kind of went, ‘OK, good job. You got me.'”

For Dalton’s pad, a well-known character actor offered up his house without a single contract. “Leo just loved his house,” says Ling. “He felt it was so his character: the big, carved Spanish bar, a man’s bachelor kind of house.”

The drive-in theater adjacent to the lot where Pitt’s character keeps his trailer was one locale “where movie magic takes over all over the place and where Quentin maybe breaks some of his golden rules,” says Schuler.

Ling had shown Tarantino a vintage photo of the historic Van Nuys Drive-In marquee as an era-perfect example, says Schuler. “He’s like, ‘Oh, I want to go to that place.’ I had the uncomfortable position of having to say, ‘Well, it doesn’t exist, Quentin — it’s gone.’ But he so liked it, he had John Dykstra, our visual effects guy, recreate it.” Then the camera soars over a vista of the drive-in itself — this time the Paramount Drive-In, filled with 200 salvaged cars from the era.

Schuler had to get creative when facing the reality that the former location for countless film and TV Westerns and onetime Manson Family hideout no longer existed. “I like to go to the real places, and the real place [was gone],” he says. “But just down the road, the city of Simi had this park called Corriganville, and that had also been a Western ranch, so I liked the connection. It afforded the same type of vegetation, the rock outcroppings, that you only find in that area of Santa Susana.”

“I shot at the original Spahn Ranch several times over my career — especially in the early to mid-’60s,” recalls Bruce Dern, who plays the aged property owner George Spahn in the film. “When I was shooting there, you were very aware of George’s presence. The set of Spahn Ranch and George’s house they built was an almost identical replica.”

Ling was especially tickled by the retro transformation of a four-corner area of Westwood, where the Village and Fox Bruin theaters stand. The movie houses reinstated their original backlit marquees and offered a treasure trove of ’60s memorabilia. “They found all sorts of stuff inside some of the original poster deco boards, so we got those into the lobby,” says Ling. “I said, ‘I can’t believe these are still here,’ and [the manager] goes, ‘I know, we just keep moving them around in the storage room.’ They were lovely and were completely into it.”

Several other ’60s mainstays of the area were reinstated, like Hamburger Hamlet, and still-standing ones like Stan’s Donuts were made over into their 1969 incarnations. “What was neat is Stan’s still alive, and they brought him over,” says Ling. “He’s like 90, and he just cried. He said, ‘Oh, my God, it’s exactly like the day I opened it.'”

A version of this story first appeared in the July 31 issue of The Hollywood Reporter magazine. To receive the magazine, click here to subscribe.