For years, Hollywood stars have frequented New York’s Prince Street Pizza for a slice of the famous Soho Square. Now, the restaurant is doing Hollywood a favor (or not, for those on strict awards-season eating plans) by offering a curated menu in Los Angeles at a three-day Off the Menu Club x Prince Street Pizza Pop Up, in partnership with the Italian beer brand Peroni, which opens Friday.

The Hollywood crowd seems to favor “mostly the Spicy Spring, but it varies from person to person,” Prince Street Pizza co-owner Dom Morano, who has had the opportunity to host pizza parties for legends, told The Hollywood Reporter. “I hosted Steven Tyler and his family in the basement of the pizzeria; I actually had a jam session and got to sing ‘Dream On’ with him. Steven would get a regular pie with fresh sliced tomatoes, garlic and oregano and he would want it extra-extra-extra-crispy!”

The legend steven tyler dropped by for a slice at prince street last night !! @iamstevent

For the Sunset Boulevard stay this weekend, several California native and transplant pizza-centric restaurants will also join in on the fete. Among them are Silver Lake’s Kettle Black (the rustic Italian eatery launched by restaurateur Beau Laughlin), Dagwoods (well known for their rainbow glitter pies), Studio City’s LBK (celebrated for their Brooklyn recipe), Upper Crust of Beverly Hills (that boasts about its homemade dough), Prova’s Pizza Truck (that uses a 100-year-old method) and Santa Monica’s Paperboy Pizza (from California restaurateur Jeremy Fall).

In addition to whetting the appetite, the epicurean affair will also give guests the opportunity to purchase a limited-edition, exclusive-to-L.A. Off the Menu x Prince Street Pizza x PizzaSlime T-shirt for $45 by the design duo who go only by their nicknames, Stoveman and Hobin. “Designing this shirt for this event was awesome, but it was absolute torture to sit in L.A. looking at pictures of Prince Street Pizza,” says Stoveman. Luckily, he can soon purchase a slice. 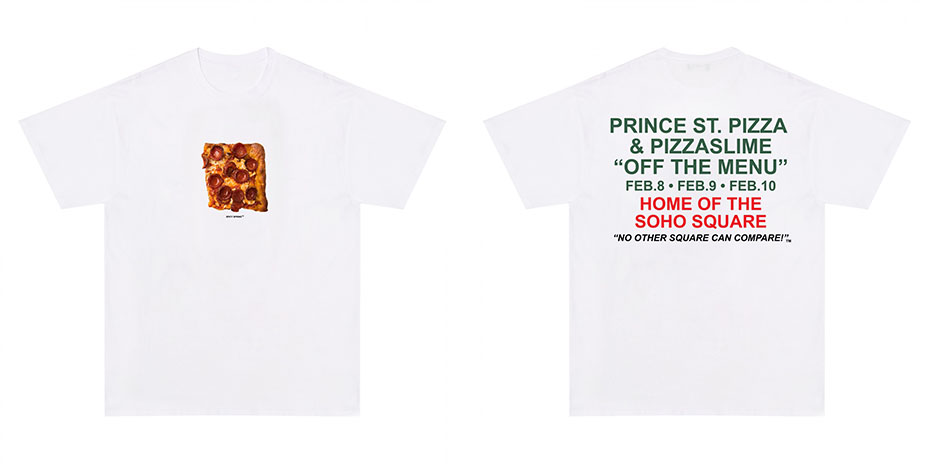 Los Angeles-based and birthed from internet culture, PizzaSlime counts Kendall Jenner among its fans (she displayed its sticker, showing Natalie Portman and Soulja Boy in an embrace, on her iPhone). Jenner has been known to order pizza from L.A. eateries Prime Pizza and Jones Hollywood.

@kendalljenner out here flex’n w/ our Natalie Portman and Soulja Boy sticker SHOULD WE DROP SOME NEW STICKER PACKS? We have sOooOoOo many unreleased stickers maybe we should start a monthly sticker club

Another pizza aficionado and PizzaSlime fan is Lady Gaga, who delivered a stack of cheese pizzas to displaced residents during the 2018 California wildfires and posted a photo on Instagram of herself with PizzaSlime merch.

While open to the public, there is a hierarchy system in place due to Off the Menu Club’s invite-only membership program. Perks of having the app and paying the monthly $20 fee include a front-of-the-line pass and a free slice of pizza. Outside of the event, members will also have exclusive access to one complimentary secret menu item per day from select restaurants around Los Angeles.