It was one of those chilly, gray April days in New York that still seems like winter, but Keith and Kenny Lucas, Academy Award nominees this year as part of the Judas and the Black Messiah original screenwriting team, clearly stood out, garbed in some bold and bright formalwear for The Hollywood Reporter‘s Oscar issue.

They looked sharp as photographer Flo Ngala put them through their paces in the shadow of the Williamsburg Bridge, close to the South Williamsburg, Brooklyn, neighborhood they call home, with Kenny wearing an off-white, silk and wool jacquard Zegna dinner jacket and black trousers and Keith in a light blue Burberry wool tuxedo jacket with contrasting ivory trousers. 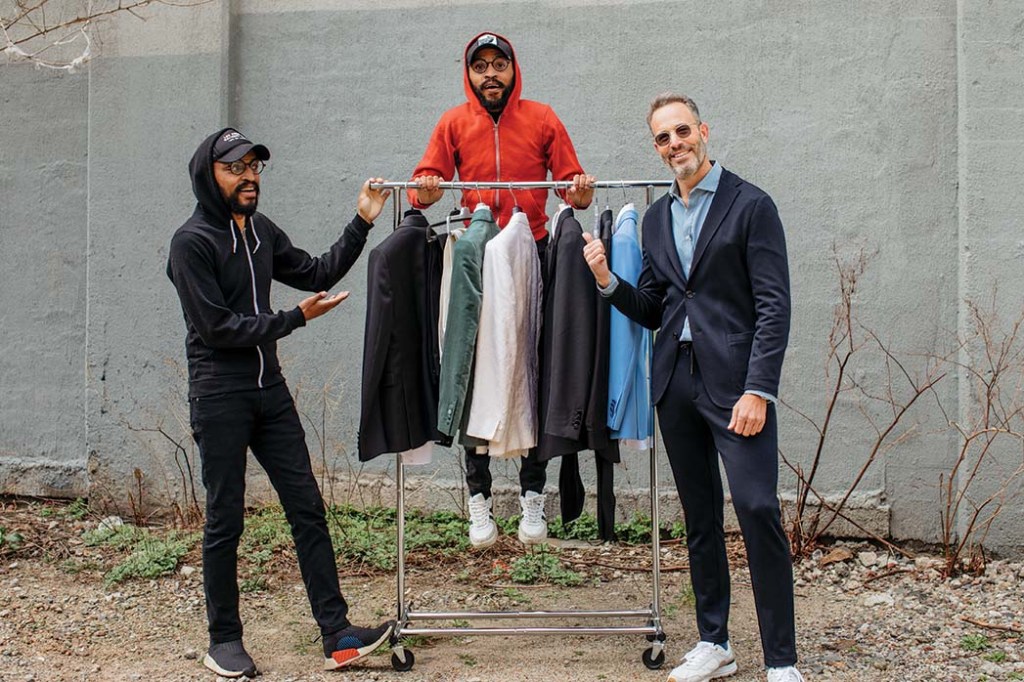 The dapper threads — topped off with their signature baseball caps in a custom version by Zegna — came together under the discerning eye of THR‘s contributing editor for men’s fashion, Andrew Weitz, a seasoned executive wardrobe adviser to Hollywood with his eponymous consultancy, The Weitz Effect.

And with the thought of “How many times do you get to go to the Oscars?” top of mind, the Lucas Brothers, 35, were more than game to see what Weitz, who put together two sets of Oscar-night looks, had come up with.

Their typical wardrobe — including onstage as a comedy duo — tends toward what Keith calls “the hoodie, hat and jeans getup,” with an occasional suit thrown on top of the mix and accented with their ever-present novelty baseball caps, picked up in local stores, and their matching all-black Lindberg eyeglasses.

“We just felt like we were ready to experiment and try different things,” says Keith. “This was an opportunity for us to show a more creative side in how we dress. And Andrew was a master at picking the right thing to make us feel comfortable.” 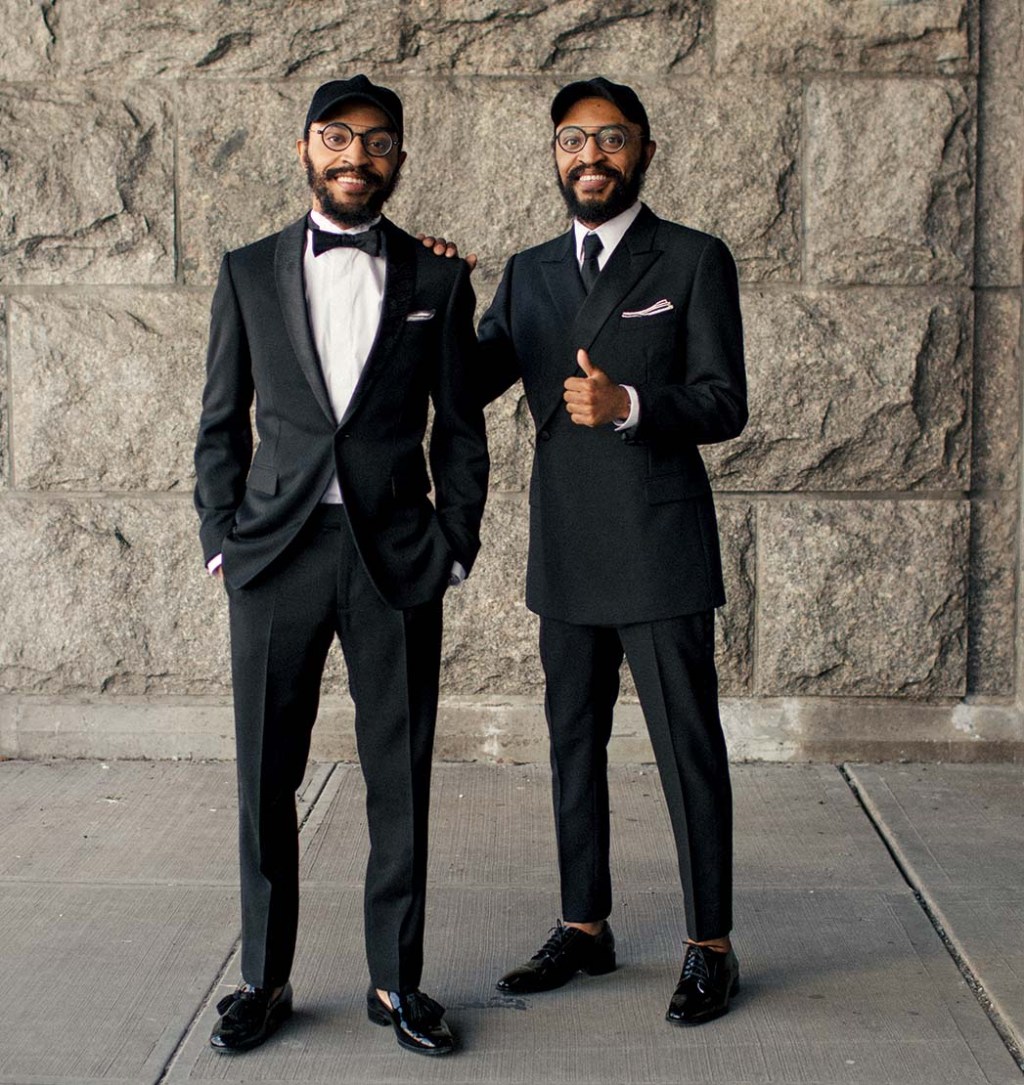 For Weitz, the Oscars are all about walking a fine line between making a fashionable impression but not overdoing it. “When you’re nominated for the first time, you want to make sure you have a presence but in the right way,” he says. Another consideration: Academy Awards night is much later in the calendar than usual (because of the pandemic), and well into spring. “You want to play off the season because it’s in late April, but you don’t want to make it like, ‘I get to wear bright pink and lime and all these crazy fun spring colors,’ ” says Weitz. “But wearing a cream jacquard dinner jacket or ivory trousers, like we’ve done here, isn’t out of place. Or the blue Burberry, it just makes sense. I don’t think I would have done that in February.”

Natives of Neward, New Jersey, Kenny and Keith dropped out of NYU and Duke Law School, respectively, just before graduation to pursue stand-up as the comedy duo The Lucas Brothers. They purposely emphasized their twinness over the years by dressing alike.

Frequent guests on The Tonight Show With Jimmy Fallon, the duo created the Fox animated series Lucas Bros. Moving Co. and starred in the 2014 feature 22 Jump Street. In 2017, they headlined their first TV comedy special, Lucas Brothers: On Drugs, on Netflix. In recent months, they have announced a pair of upcoming writing projects, a Revenge of the Nerds reboot with Seth MacFarlane and a semi-autobiographical dramedy with Judd Apatow.

For the brothers’ initial round of Oscar looks, Weitz went for contrasting combinations. To go with Kenny’s cream Zegna jacket, Weitz selected a classic bow tie and tuxedo shirt but added a snazzy glitter evening slipper. For Keith, he opted for an ivory formal shirt with the punctuation of David Yurman black diamond studs and cuff links; the shirt was worn tieless with a silk scarf that was just a shade darker tucked underneath.

“I just thought that was a nice touch because, thinking about the pandemic and how casual everything was the last year, maybe you don’t always need to be too stuffy,” Weitz says. “Yet overall the look was very subtle, and the fact that it was all tonal made it look more formal. I wouldn’t have liked the look if it had been in a contrasting color.” 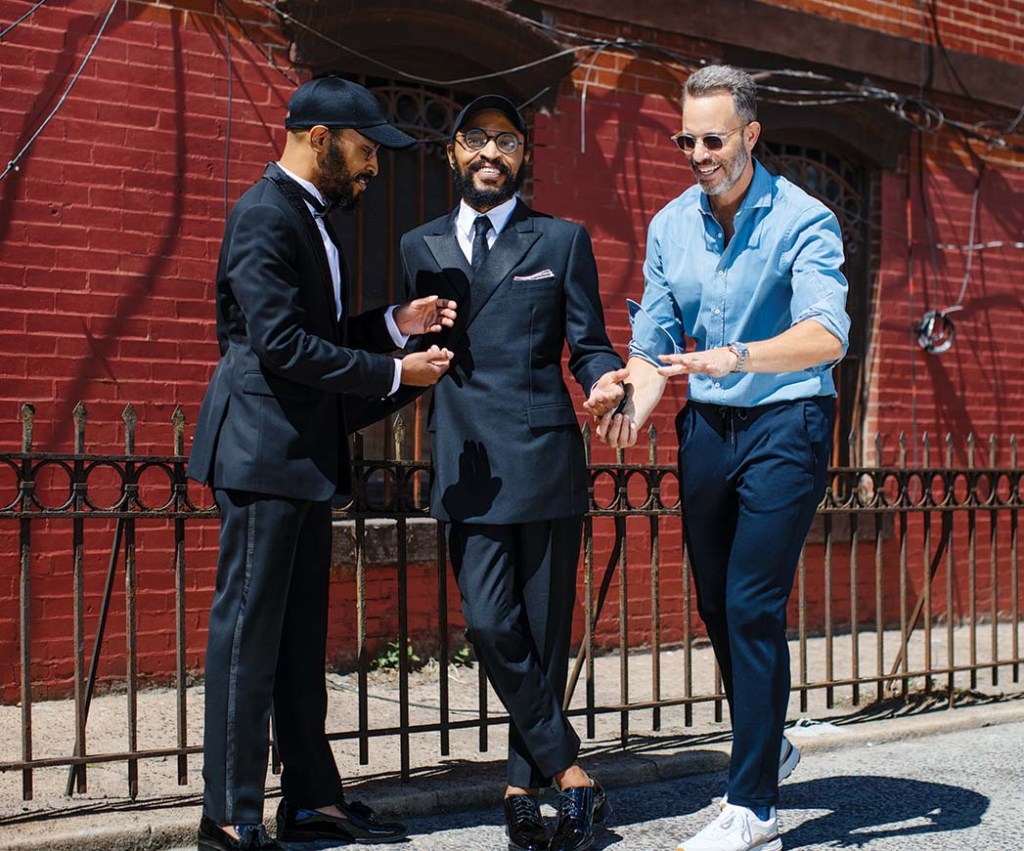 For a second round of options, Weitz defaulted to a timeless black tuxedo for the guys, but each choice was a couture-like rendition of the classic.

Kenny tried on a sumptuous Dior Men version that, like his cream jacket in the first round, was cut with a jacket style that some fashion pros call one-and-a-half-breasted. It follows the silhouette of a traditional double-breasted jacket but has only one button to fasten it, placed a little off-center. (Designers Kim Jones at Dior and Alessandro Sartori at Zegna, among others, are both ardent proponents of the trend, which has been appearing more frequently on the red carpet in recent seasons.) “It’s so modern and chic, and it’s a different take that I love,” says Weitz. “And it just works really well for most men.” To emphasize the tux’s “super-clean” lines, Weitz opted for a straight black silk tie, white formal shirt and simple lace-ups.

Keith’s black tuxedo has a knife-slim silhouette and features a narrow silk lapel in Berluti’s iconic Scritto motif, a faint pattern based on the art of calligraphy. A matching bow tie, a crisp formal shirt with hidden buttons, and statement patent tassel loafers were all that was needed to complete the ensemble.

Oscar night marks the culmination of a long journey for the Lucas Brothers, who first became acquainted with the story of Black Panther Fred Hampton when they were in college in 2004. “We didn’t want it to continue to be relegated to the margins of history. So we felt an immense obligation to tell Fred’s story as we got into the industry,” says Kenny. “So, this situation now, with six Academy Award nominations, just blows my mind,” he adds. “I’m just so honored to have been able to be a part of a film that honors the legacy of a man that was taken from us too soon but whose impact reverberates to this day.”

Contemplating what they’ll choose for the Oscars, both Kenny and Keith say that as much as they appreciate the suave black tuxedos, they are leaning toward the more eye-catching contrasting dinner jacket combinations.

“I felt like the first look was more my style,” says Kenny. “I just fell in love with the jacket and the pants and with the shoes were just next-level. It felt so distinctive.” Keith adds that the first look was his favorite, too. “That blue jacket just popped,” he says. “I never thought I would wear Carolina blue because I went to Duke, and I hate Carolina blue. But it felt good. It felt good.”

TUX TIP NO. 1 How to wear a blue dinner jacket — “It could either look like you’re going to prom or could be really stylish,” says consultant Andrew Weitz. “But paired with the cream trousers, it looks elegant.”

TUX TIP NO. 3 How to tailor a tuxedo pant — “A slightly tapered leg with no break will give a clean, elongated look,” Weitz advises. “And wearing a no-show sock gives the look some personality.”

TUX TIP NO. 4 How to add a pocket square — “Add extra pop by showing the border of a silk pocket square with dots or a pattern,” says Weitz, “instead of the traditional pouf — that looks outdated.”