Continue to The Hollywood Reporter SKIP AD
You will be redirected back to your article in seconds
Skip to main content
January 24, 2017 6:02pm

Even though all of the front row seemed to be recovering from Dior’s magical late-night fete on Monday, the fashion crowd dutifully turned out on Tuesday for the second day of couture week in Paris. Here are some of the highlights:

There may have been a slate grey sky and snow flurries outside, but inside the Grand Palais it was springtime in Paris as Karl Lagerfeld showed a couture collection full of sleek sparkle and in a palette of pastels straight from a box of Laduree macarons.

The new silhouette was powerful, prim and proper (some might even call it first lady Melania Trump-like) with squared-off shoulders, slim skirts and wide belts accenting the waist. Forget messes of Chanel pearls past, all the embellishment was in the clothes themselves, including crystallized tank tops and underskirts peeking out from dresses. 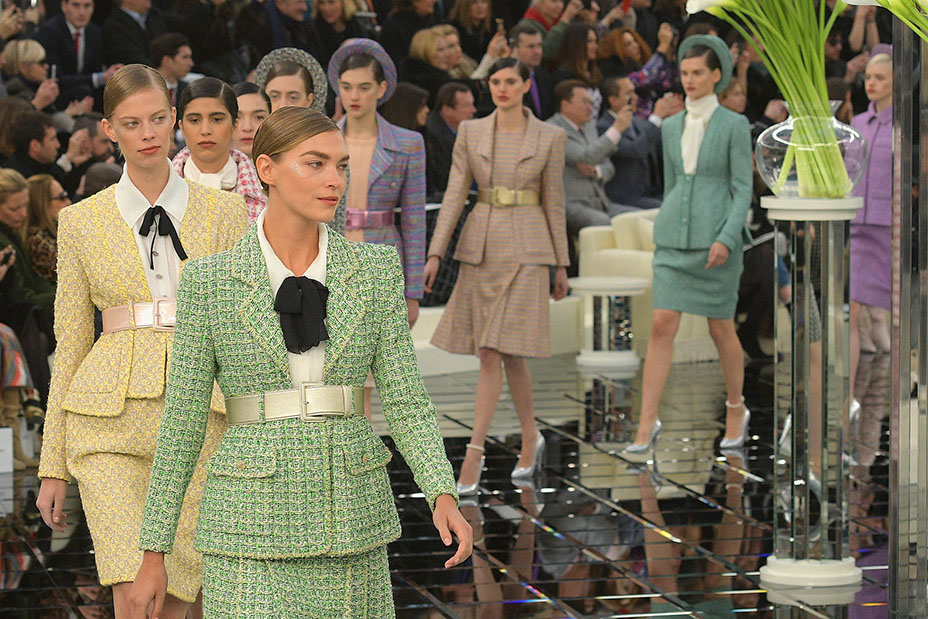 A pale pistachio ball gown slit to reveal a silver embroidered bodice was particularly stunning, as was a slim cut power suit in crackled, icy crystals over black velvet. On the day the Oscars nominations were announced, stylists are surely already on the phone trying to secure these looks for the red carpet. 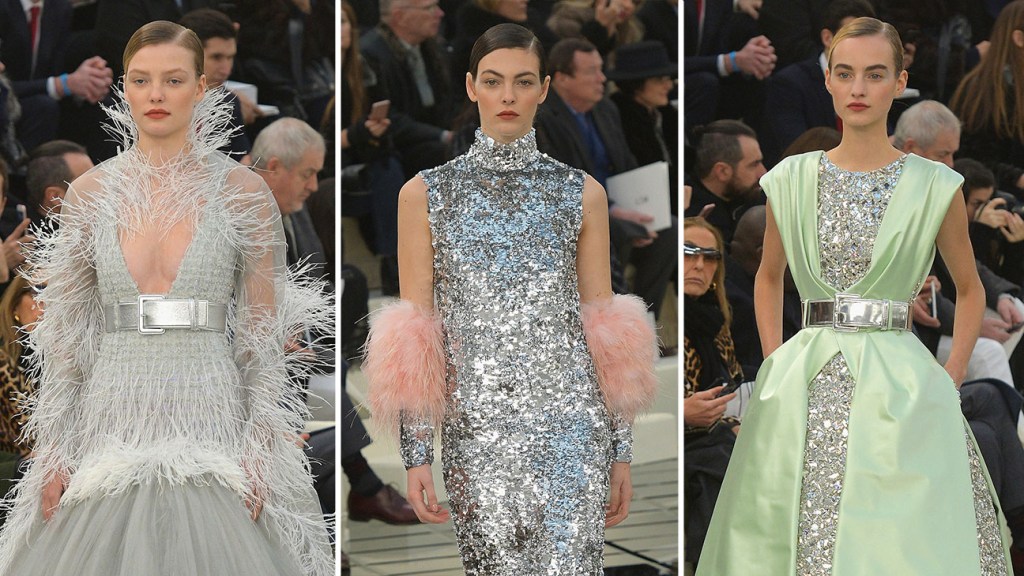 Models of the moment Bella Hadid and Kendall Jenner walked, Jenner in a particularly jolie silver crystal gown with a plunging v-neckline. All had their hair in discreet buns, with equally discreet pearl anklets worn above their silver stilettos.

The classic tweed Chanel suit was cut more voluminously than usual, in a new, rounded silhouette Lagerfeld called “the spoon,” a tough-to-wear look that made even the size zeros look mildly pregnant. 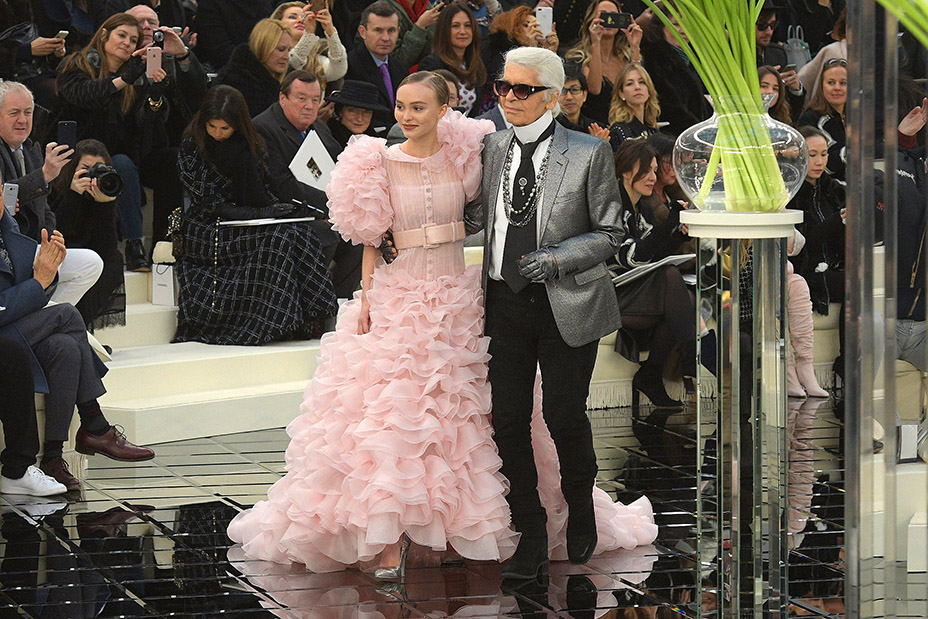 Lily-Rose Depp was Lagerfeld’s rose-colored bride, in a frothy pink gown. The couple took a turn about the round as proud mama Paradis looked on.

It was a return-to-you-roots moment for Lagerfeld. Perhaps he’s signaling we’re in the calm before the storm, and giving us all something to reflect on.

It was a big day for guests Nicole Kidman and Isabelle Huppert as both were nominated for Oscars just three hours before the show. Luckily they’re not competitors — Kidman’s nod is in the supporting actress category for Lion and Huppert is up for lead actress for Elle, or the front row seating might have been awkward. “I just want to sit here and talk to her about acting,” Kidman said of the French legend, though Huppert was taking congratulatory calls up until the show started. 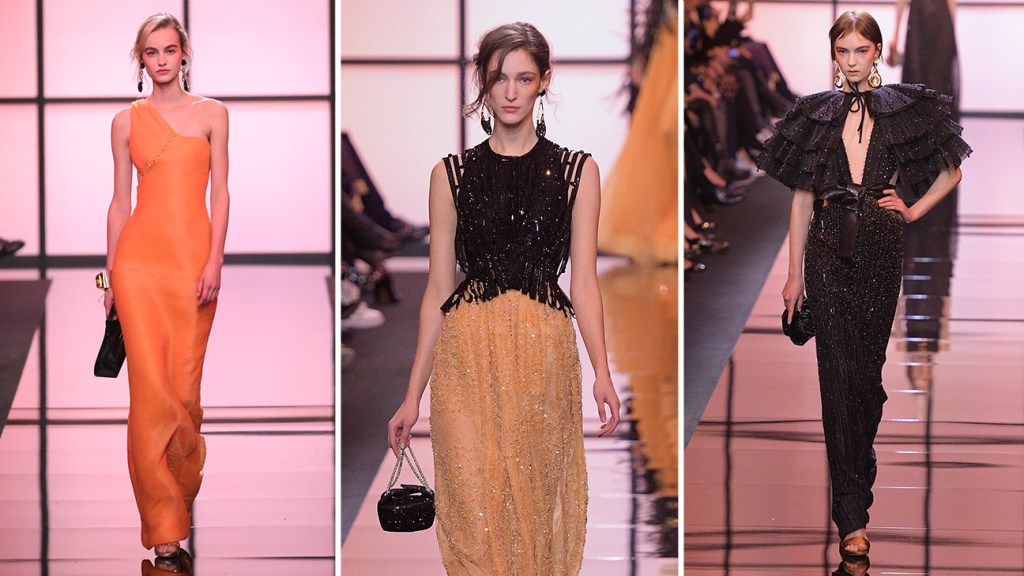 Vogue’s Anna Wintour (not Carine Roitfeld as Kidman’s minder kept calling her) congratulated Kidman from across the runway. “I’m so happy. And Harvey’s happy. That’s what counts,” she joked of studio chief Weinstein, who produced Lion. She also noted she was particularly touched that this nomination was for an Australian production.

Armani once again chose a theme color and stuck to it for most of the 48 looks; this time around orange was his hue. As usual, he looked East for inspiration, with Chinese frog fasteners on some jackets, and long flowing skirts inspired by the Indian mandala.

But the color of carrots and pumpkins can be hard to wear; luckily, the veteran couturier broke the monotony with some stunning black gowns that could be red carpet contenders, particularly a slinky one-shouldered silk column. Beaded bibs were an eccentric accessory that worked well.

A couture collection that sends out pairs of jeans as lead looks is certainly bucking convention, especially after the conservative craftsmanship of Chanel and Armani. But Vauthier is couture’s bad boy, cutting barely-there minis so very micro that the audience, seated below the mirrored runway, had a clear view of some models’ white undies. 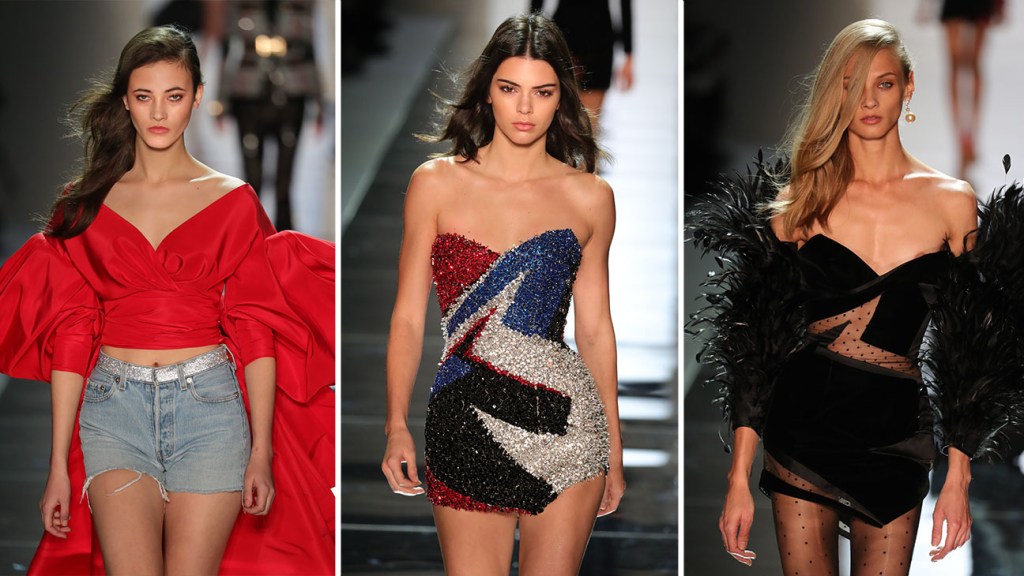 The collection, carried out in red, white and electric blue, could be called eclectic Eighties with high-waisted jeans, bustiers and graphic sweaters giving way to Daisy Duke cutoffs topped with voluminous trailing tops. A black velvet bodysuit was tied with a side skirt, and even the decade’s sheer black polka dotted tights were on display in the collection, modeled by Bella Hadid and Kendall Jenner.

Given that Vauthier is a favorite of Rihanna, Beyonce and Miley Cyrus it’s likely his daring looks will be more welcome at the Grammys than the Oscars.

For a designer that once told us his dream is to dress Queen Elizabeth, Alexis Mabille seemed to be making a direct plea with a collection topped by diamond crowns.

Though Mabille’s signature bright colors are also favored by the queen, much of this collection wouldn’t pass the monarch’s muster. Some of the looks were more lingerie than luxe, in particular sequined swimwear topped with tulle capes. 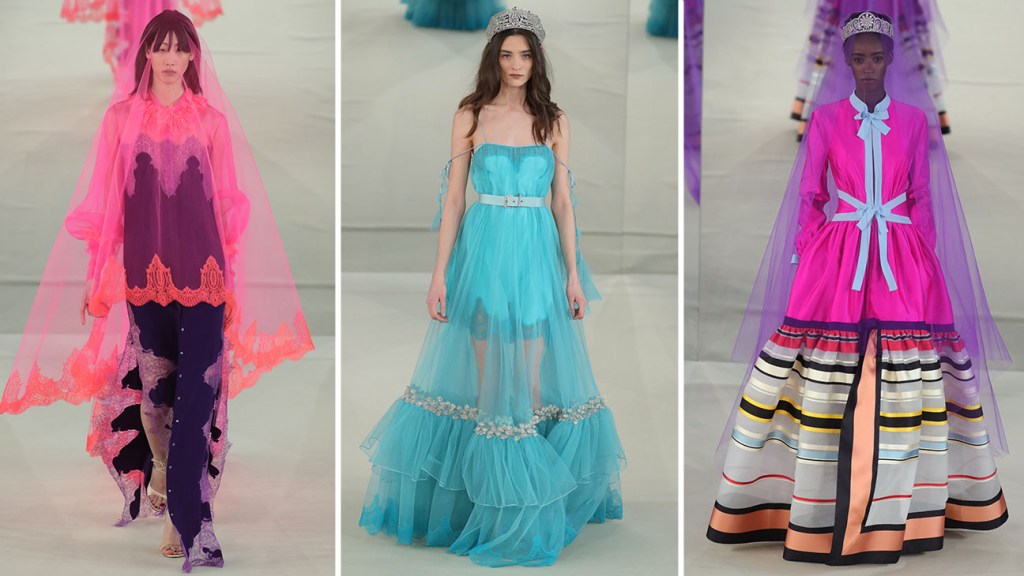 You can’t deny Mabille’s exuberance, and it translated here in the bold colors and bits of whimsy, such as a hot pink gown with a multicolored bayadere bottom, fastened with two large white bows. Bright and brilliant, but it would take a brave soul to wear many of these looks on the red carpet.

An azure mini dress encrusted with diamond stripes is playful for a young actress (look 15), and a golden yellow dress with black embroidered beads was one standout number that works for a summer evening premiere (look 12).