Following the inauguration of Donald Trump, the historic Women’s March and French presidential primaries this weekend, not to mention the ongoing dual security concerns after the terrorist attacks and the Kim Kardashian jewelry heist last fashion week, couture week opened under a cloud. And while no one has ever sung a song about Paris in the winter, the collections carry on presenting the dreamiest of dresses. Here’s a rundown of the first day’s happenings:

Thandie Newton was still energized from attending the Women’s March in London Saturday.

“The demonstrations all over the world were so peaceful, and the fact that we’re here talking about it still is beautiful. It feels joyful, it feels inspirational,” she said. “The world was honoring women, and I think that this call to action needs women to take the lead.”

However, with a nod to the venue and her sleek black sheath with a red heart detail and red silk blazer, she joked: “But we can be powerful and look nice at the same time.”

The house’s founder, Elsa Schiaparelli, was known for her work with powerful women such as Mae West and Katharine Hepburn, and designer Bertrand Guyon carries that torch today. A gorgeous gilded jacket (look 28) seemed almost ready for battling the modern world. Asian influences were heavy, with dresses putting the Japanese rising sun front and center (look 29), as well as traditional kimono-style jackets and obi belts. 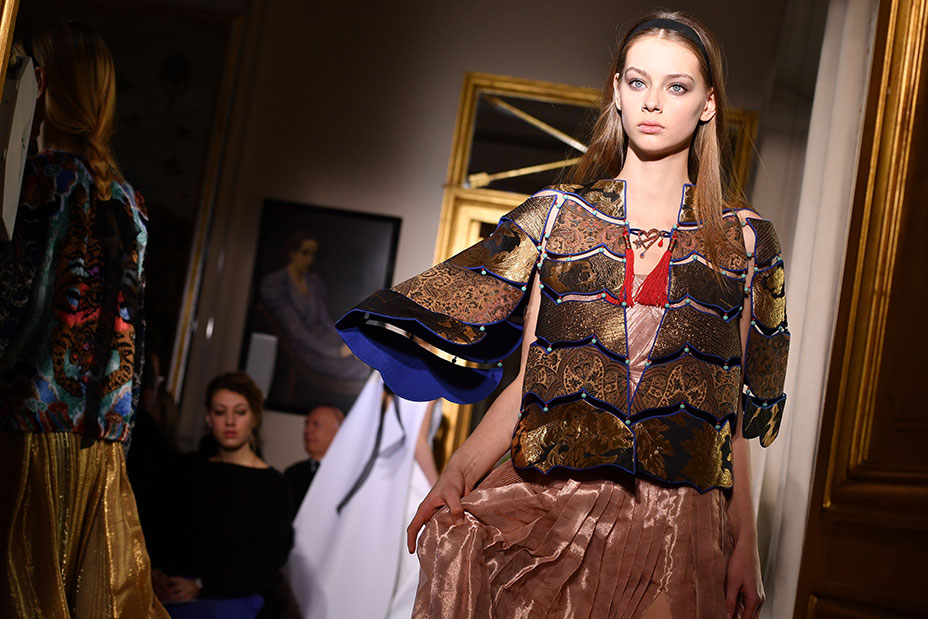 The collection stayed true to Elsa’s historic works, with both a suit and dress take on the famous lobster dress she created with Salvador Dali, but the house should note that their red-carpet triumphs have been when the surrealist tendencies were a little less literal. A stunningly simple white gown with a “handheld cape” was a subtle nod to the house’s avant-garde artistic legacy (look 20).

Heart boots and shoes in bright colors anchored the collection and seemed to be a subtle signal that for Guyon, love trumps hate. 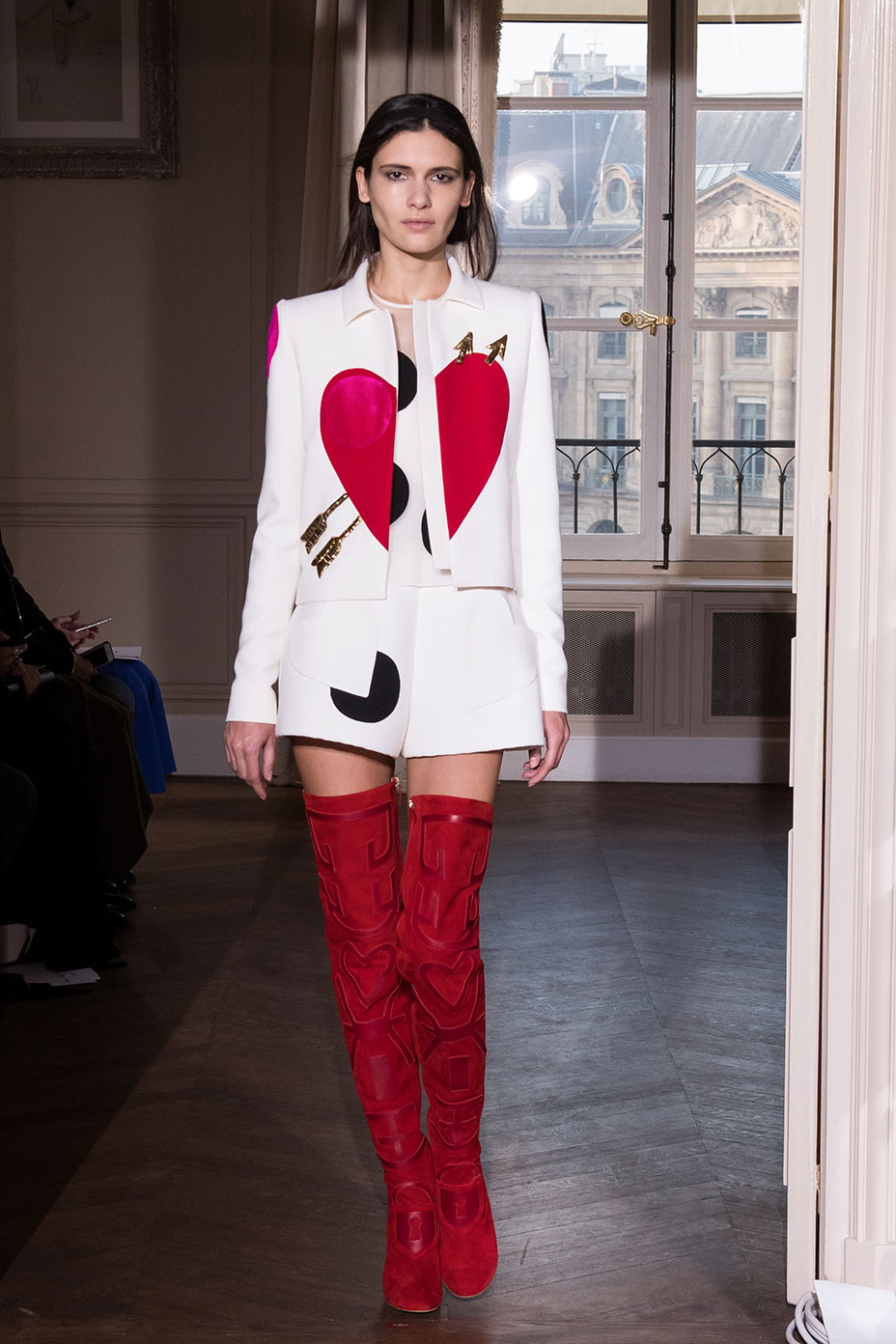 After the show Kylie Minogue told Pret-a-Reporter she was “completely entranced” by the collection. Her first time seeing the house’s collection, she said she didn’t know what to expect but found it very versatile. She had her eye on a blue and white jacket-shorts combination among others. “I can see it for red carpet, but honestly, and with little adjustments, I can see a lot of it working for me onstage.”

The Aussie songstress said she is currently working on a new album that she hopes will come out later this year. While she hasn’t committed to a tour in 2017, it could be in the cards. “I’m not sure yet, but anything is possible,” she said before braving the cold in her miniskirt and sky-high stilettos on a mad dash to the Ritz hotel next door.

The Maison des Metallos in Paris’ hip 11th arrondissement was the perfect place for Iris Van Herpen’s show. The former steelworkers union meetinghouse has been transformed into an art center that is dedicated to projects that explore technology. It was a fitting venue for the designer, who is known for her avant-garde designs riffing on technology, including experiments with 3D printing her garments.

For her collection, titled “Between the Lines,” Van Herpen was letting nature and technology battle it out on the runway.

Van Herpen collaborated with Berlin artist Ester Stocker, who the show notes indicated is known for her works in manipulation of space until “the mind starts making connections that aren’t really there.”

Black fern leaves on clear white material seemed to wave in the breeze, and dresses appeared to be made of water flowing over rocks at the bottom of a river as models dashed between spaces of dark and light. The music was pulsating so loud the floor shook, and then it was on to a piano melody, peaceful and graceful, as pantsuits fluttered over the body, only to screech to a halt as the final look of a model breaking through the — what? Melting ice? The glass ceiling? — took to center stage. The models’ makeup nearly tread into the uncanny valley; they looked almost like androids.

You could sense the frustration of guests as the sharp lighting often left the models in shadow, making it nearly impossible to get a good shot. And if you can’t Instagram it, did it even happen? But maybe that was the point. 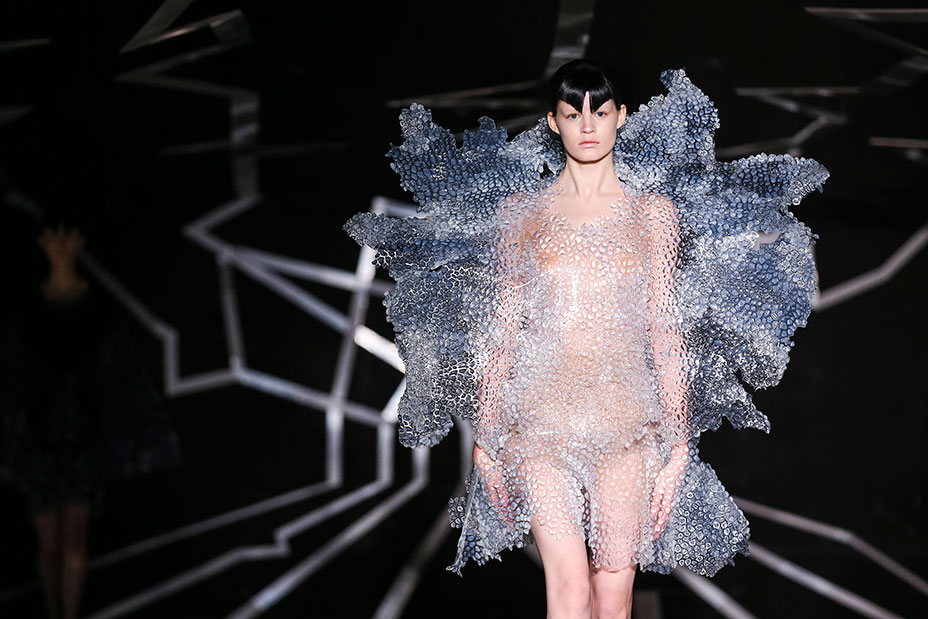 The most anticipated show of the week was Maria Grazia Chiuri’s Dior couture debut, and she did not disappoint, delivering a magical collection in the gardens of the Rodin Museum. The interior recalled an enchanted fairyland, with models walking a maze around a central tree draped in charms and lights.

The first looks were simple yet mysterious, with models hidden behind masks recalling birds and butterflies, and long hooded capes. As the looks became more confident they shed their masks and were instead topped with crowns of flowers and feathers. 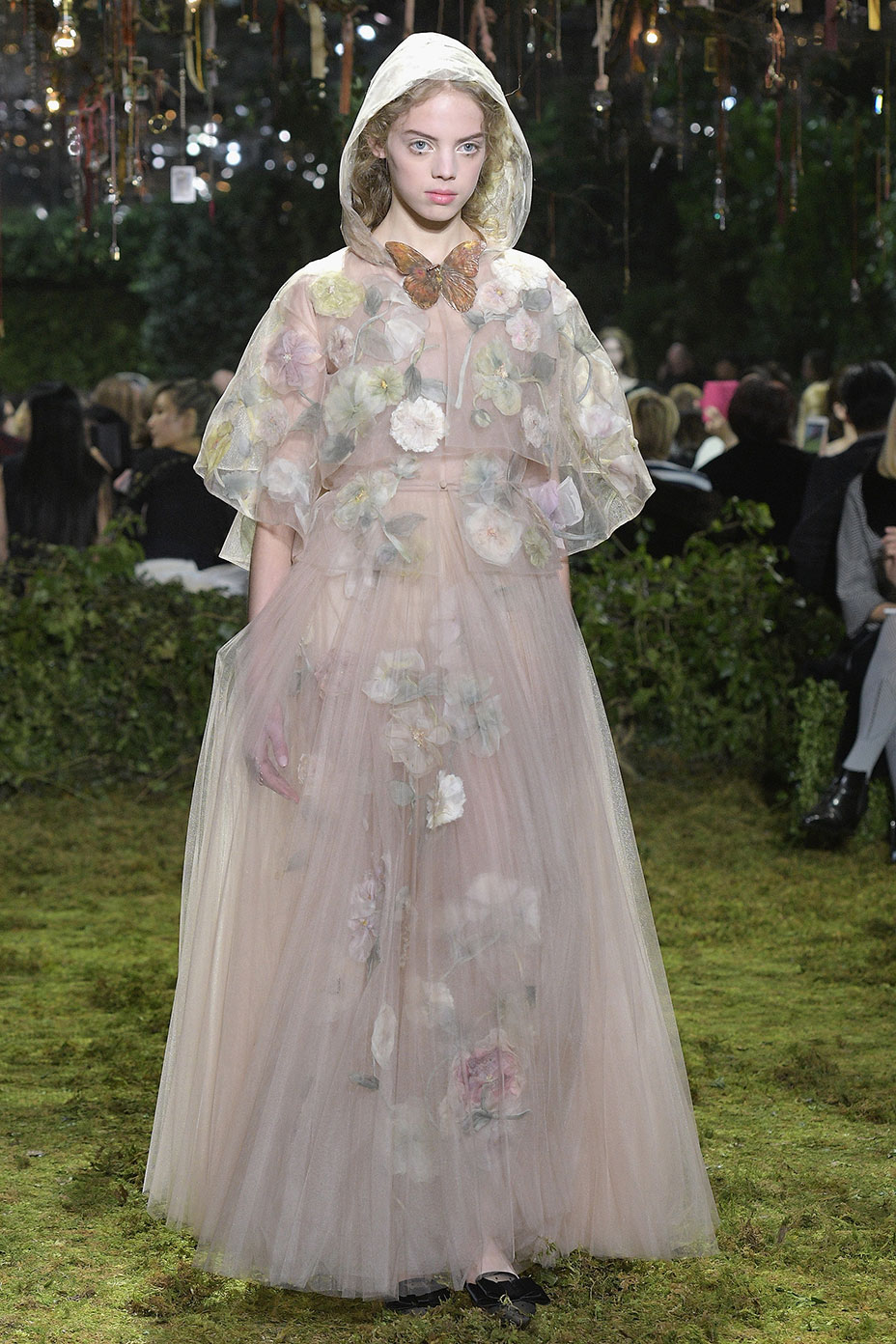 There was not a misplaced note, as she relied on the house’s traditional Bar jacket and New Look silhouette for many of the fantastical ball gowns embroidered with poppies and pansies, or the signs of the zodiac. Spilt baggy trousers were among the first looks and had a more practical note.

Many of the gowns are clearly headed for the red carpet, if not for Oscars then perhaps Chiuri was making a play for Cannes — Carnival of the Animals was the music of choice, and those first few notes are surely familiar to anyone who has spent time in the Palais, including Kirsten Dunst, who was on the jury last year.

She sat front row with Diane Kruger, showing off her new engagement ring.

Stylist Nina Hallworth, stood nearby trying to help a lost ladybug. “I live in the San Fernando Valley. I’m not a fashion person,” she declared, despite dressing Dunst for over a decade. “This is amazing, and I’ve met the designer before, but the fact that we’re standing on grass equalizes everyone.” Kruger, a longtime fan of Chiuri, was in vintage Dior, though she admitted that she owns only a few pieces of couture. “I can’t pay for those dresses. I’ve been lucky enough in my career to have couture dresses made for me for Cannes or a big movie premiere, but I don’t get to keep those unfortunately.”

The seats were moved out and the space turned into a dance floor for a masked ball that went into the wee hours of the morning and saw Dunst and Olga Kurylenko lining up for tarot card readings. 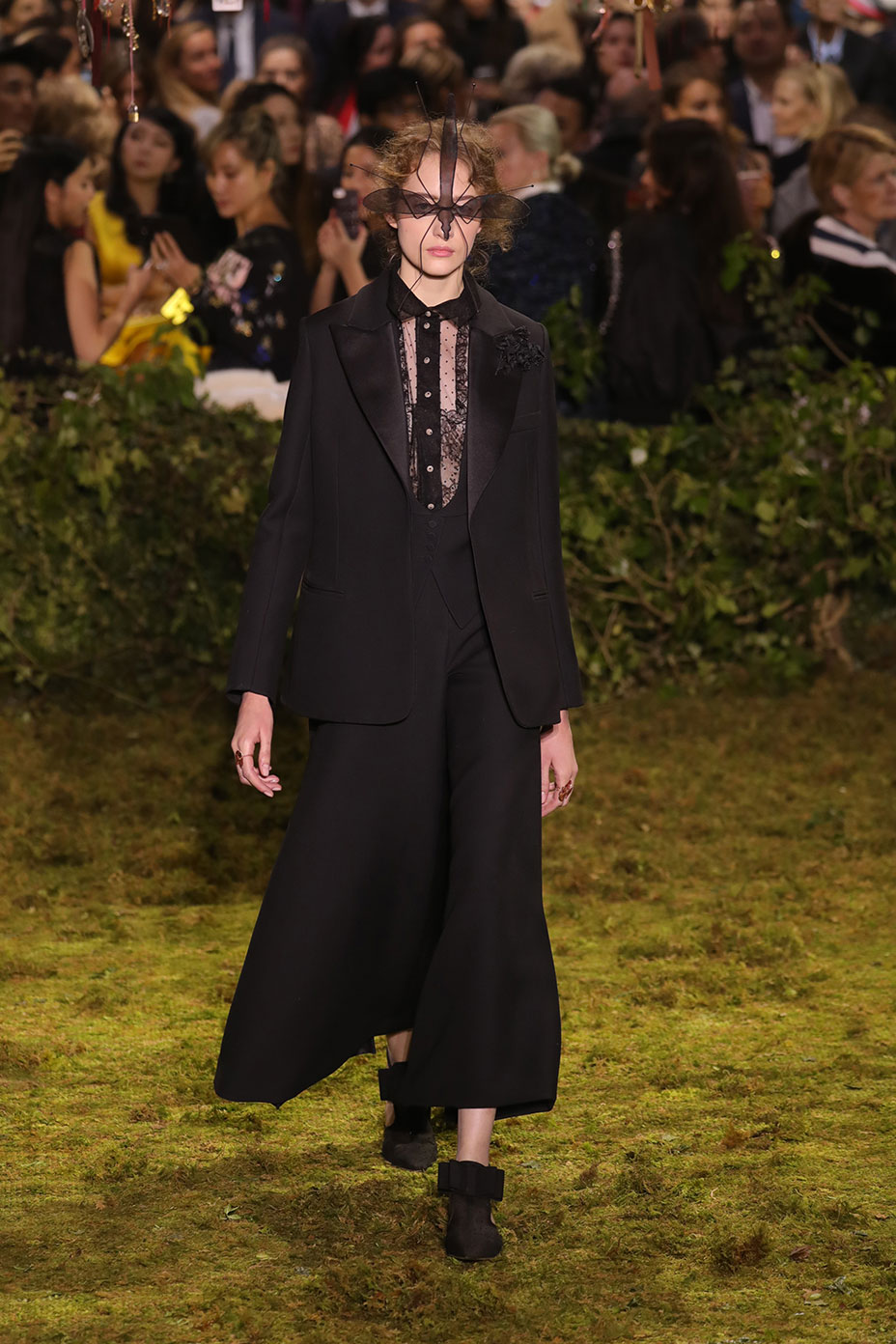 Dunst made her way to her second show of the day across town — with an outfit change from her all-black Dior ensemble to a light and airy white frock. If that was a hint of who might design her wedding dress, she demurred: “I’m looking for everything.”

The young house, which has become a red-carpet powerhouse on the shoulders of Angelina Jolie, Beyonce and Gwyneth Paltrow, showed an uncharacteristically uneven collection. The husband-and-wife Aussie design duo are still masterful with their work in tulle and beading, particularly on a voluminous red gown and a light blue beaded number that boasted a plunging neckline and pockets, but a midriff-bearing two-piece and the addition of visors to some looks seemed incongruent. Silhouettes ranged from ‘60s-inspired to over-the-top ‘80s with models united by a singular black blunt bob hairstyle.

Rapper Nelly also made an appearance to check out the clothes before performing at the brand’s afterparty to the delight of screaming fans. 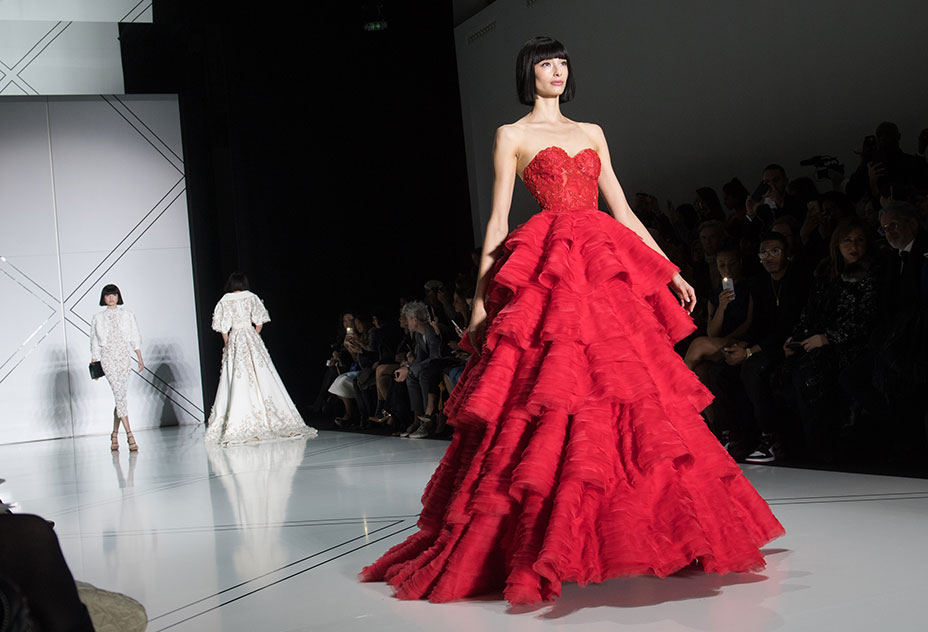 The designer, another master of the voluminous tulle skirt, started slim and simple with silk pajama-like tunic suits that looked as if they had been freshly unpacked, with unfinished seams and loose threads. Those were paired with flats and chunky crystal embroidered collars, a nod to his legacy of easy elegance and streamlined shapes elevated by embellishments.

Echoing Dior, Valli was also in full bloom with floral coats and cocktail dresses before moving into multilayered gowns (the mullet of the fashion world). 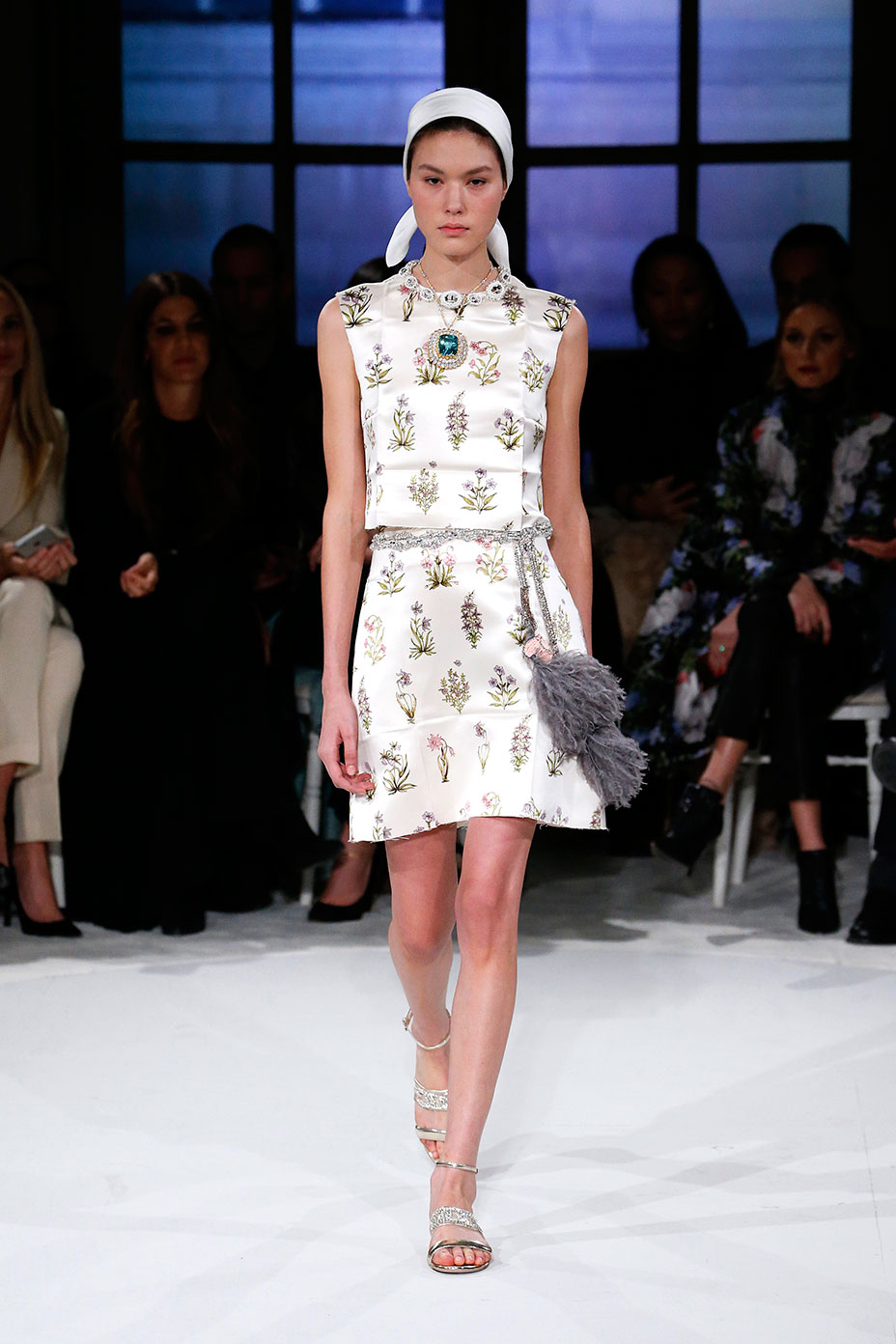 He invited guests to the salons of the National Archive in the Marais, and while we weren’t invited to dig around in the documents, it was easy to see the references Valli used for his flowing empire-waisted dresses in diaphanous silk and topped with lace Elizabethan ruffs. It’s a shape he has been exploring for several seasons, though it has worked better in the past when paired with less print. Ballgowns topped with gold points sparkled and stayed on-trend with long sleeves.

Valli is a red-carpet staple for fans like Kruger and Jessica Alba; stylists surely have their eyes on these for upcoming red carpets. He finished with skirts worthy of Scarlett O’Hara — so wide they were brushing the laps of front row guests. But underneath all the layers, they were still wearing flats. It is a new day for women, after all. 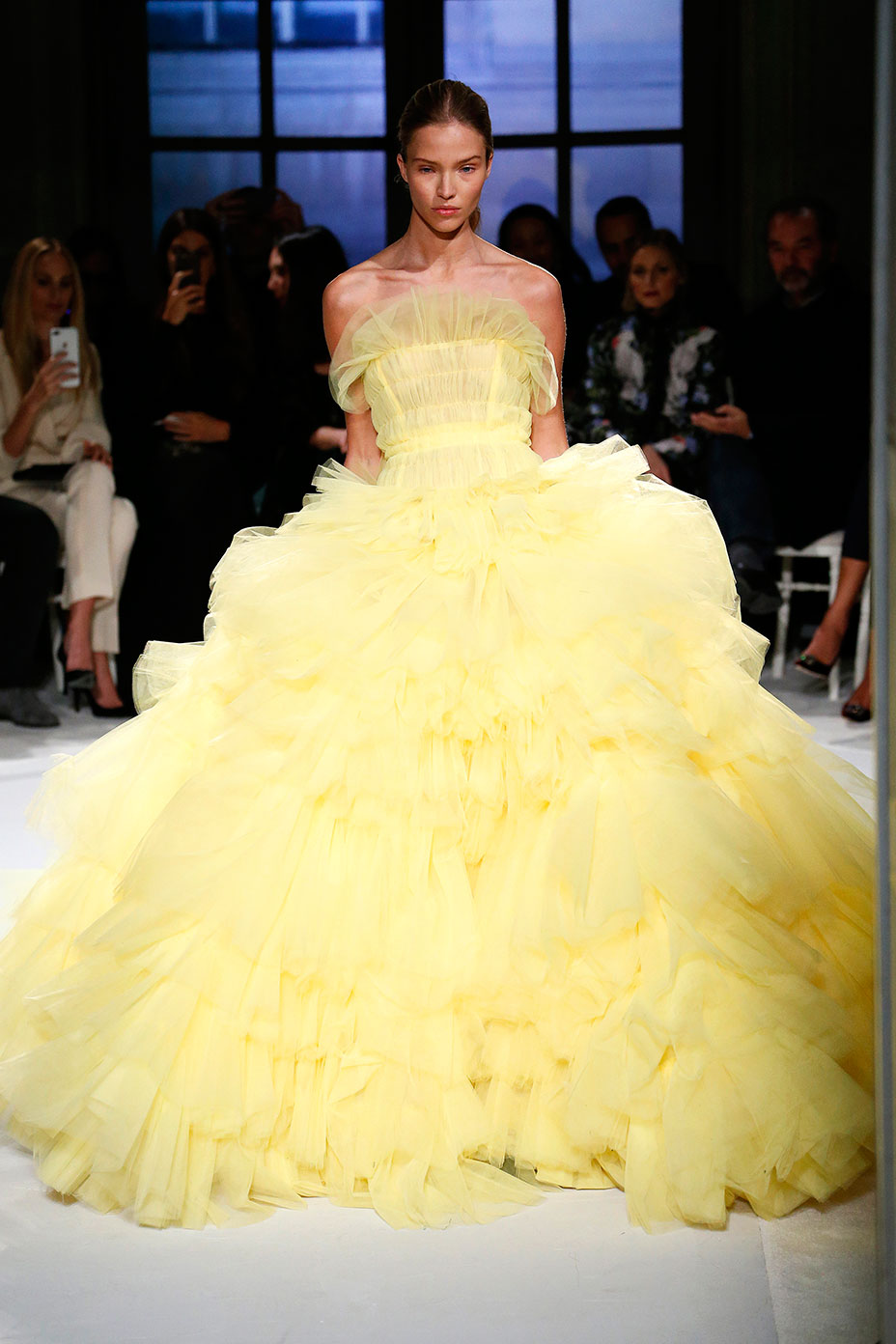