Acid-washed jeans, T-shirts and Crocs … at the Paris fashion shows? That’s right, the casual revolution has hit the hautest runways of them all, from windbreakers and sneakers at Valentino, the house synonymous with red siren gowns, to the fugliest of footwear, Crocs, at Balenciaga, whose namesake, once known as the master of couture, is probably rolling over in his grave. 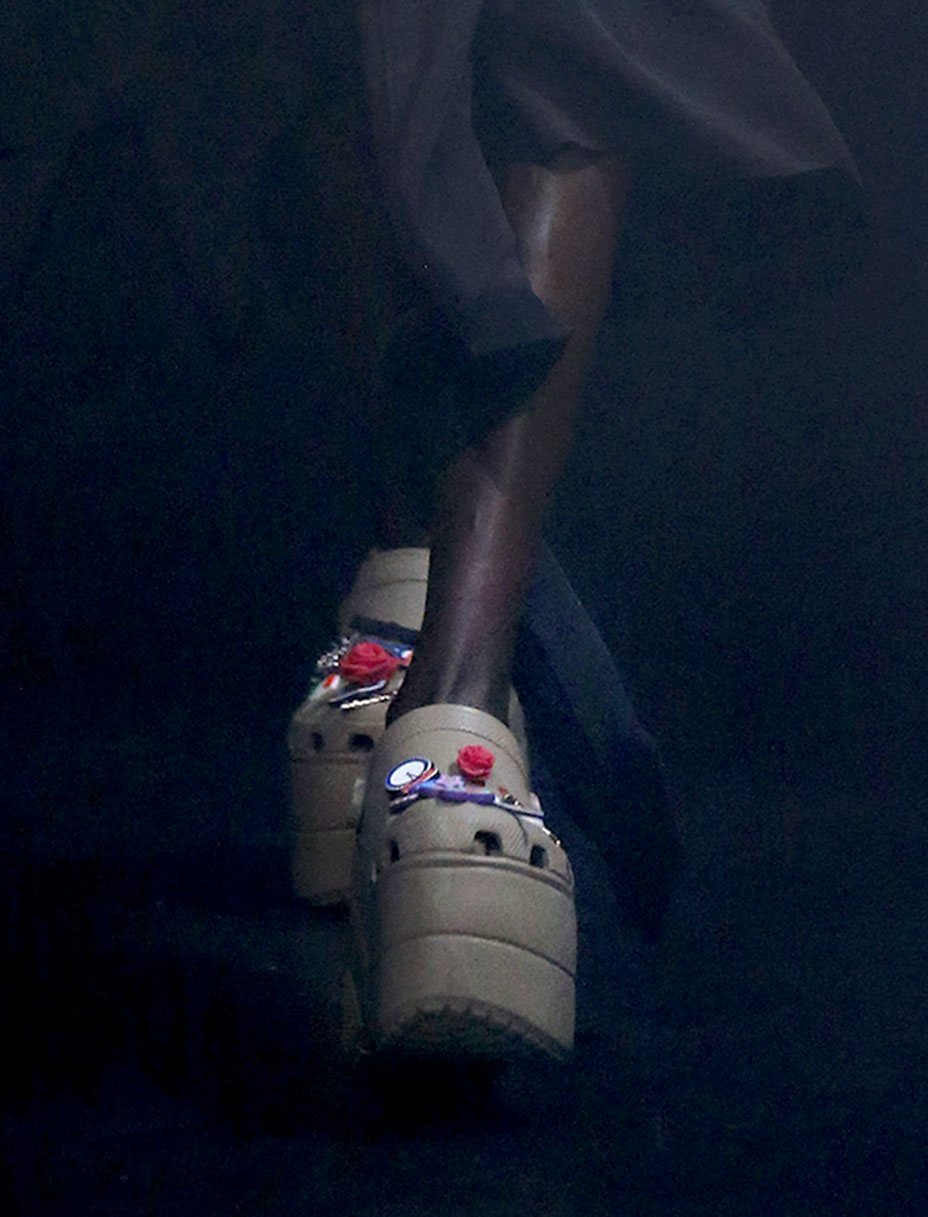 This revolution in the look of clothes is happening at the same time that the fashion industry is taking a generational turn, with the death of print publishing scion Si Newhouse over the weekend and new names on the mastheads at Allure, Elle and soon Glamour, where the latest rumor has style rebel Lena Dunham heading for the editor-in-chief seat.

You only have to scan the editors in the front row, once the standard bearers of formal chic, for evidence of where designers are coming from with the idea that women want to ease into fashion, not suffer for it. With the exception of grand dames Anna Wintour of Vogue and Glenda Bailey at Harper’s Bazaar (and peacocking street-style stars, which is a whole other conversation), most fashion insiders have adopted much more casual wardrobes in recent years. Where the front row used to be dressed to the nines, now more often it’s dressed in denim and sneakers. 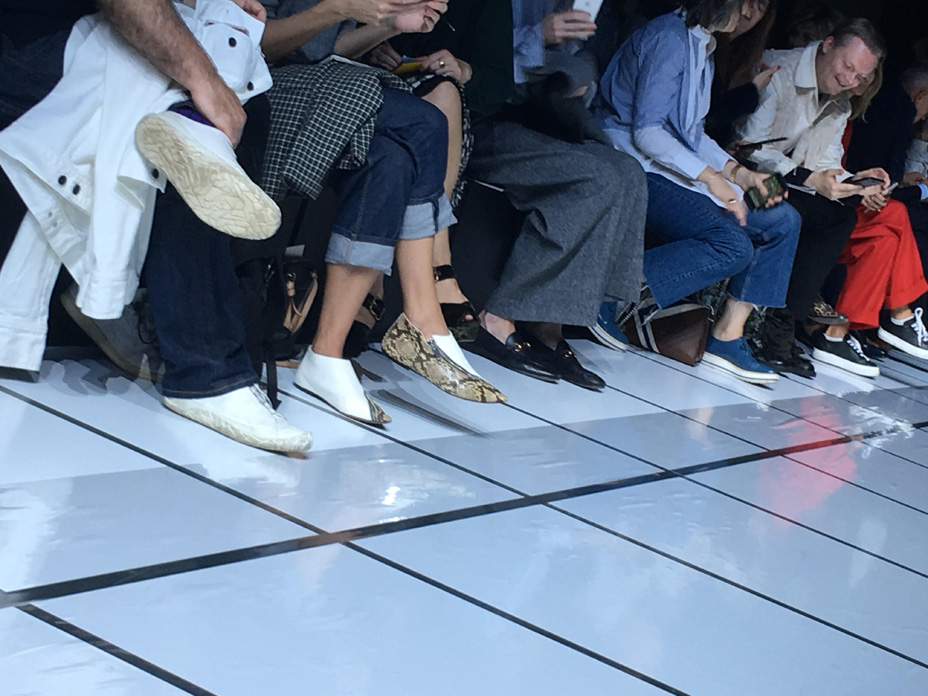 The casual trend on the runways also addresses the all-important millennial customer, which luxury brands are desperately trying to woo; one wonders if designers have reasoned that they might as well give them what they already seem to love most about street wear, sneaker and fast-fashion brands. 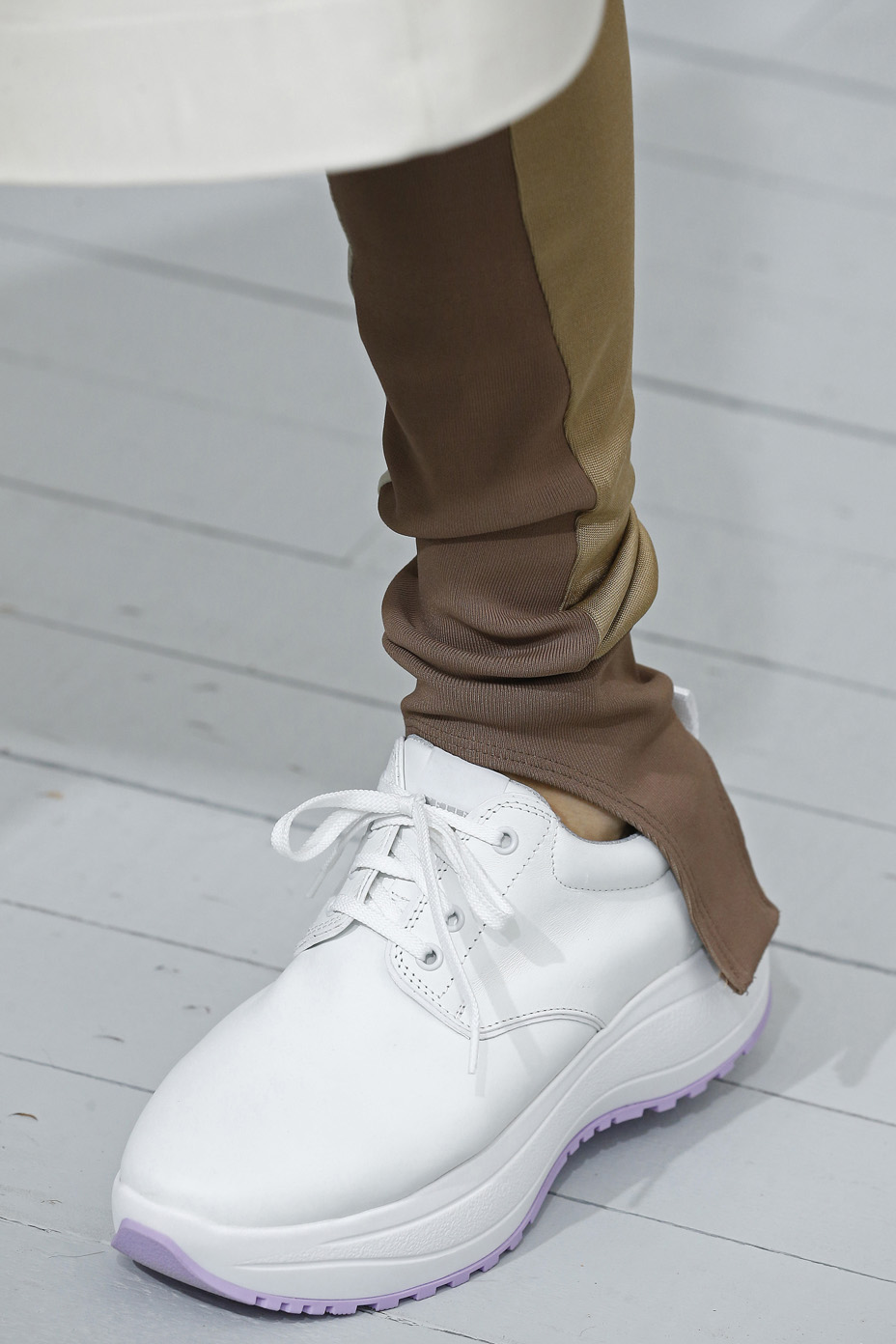 Of course, it’s not like we haven’t seen sportswear and comfort footwear on the runways before. When Phoebe Philo sent fur-trimmed Birkenstocks down the Celine runway in 2013, she changed footwear forever. (This season, she showed Dad sneakers). It’s easy to trace a line from that to the Croc collaboration at Balenciaga, whose designer Demna Gvasalia has made a habit of teaming with all kinds of brands at his own Vetements label, Levi’s and Juicy Couture included. And who can resist the call (or the click) of couture Crocs? But it’s become almost formulaic in the business at this point: A luxe tweak on something familiar, preferably awkward and traditionally un-chic, equals social media gold for a brand.

Gimmicks aside, this season the dressing down of the runways seems to have reached critical mass, begging the question: Can anything be fashion, even the humble boiler suit? And if it can be, where does that leave the top-down luxury industry, once it’s co-opted everything from the bottom up? 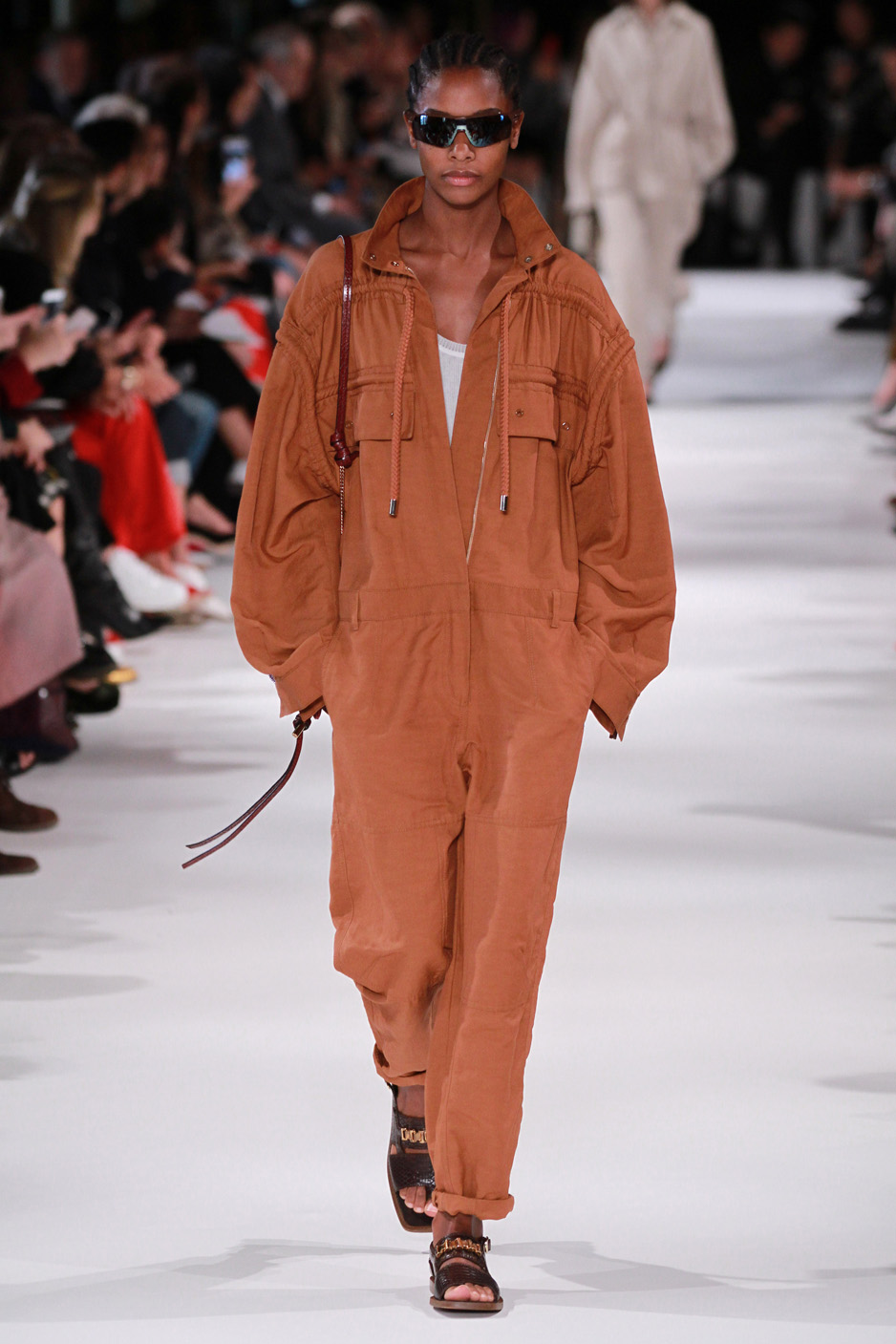 Fashion has become more democratic in the last decade, no question, and perhaps this season more so in response to the tenuous sociopolitical climate we find ourselves in. In short, with the divide between haves and have-nots growing ever wider, it may just not be prudent to look rich, which could be why we’ve seen a rush of designer denim. (Acid-washed at Stella McCartney definitely plucked the nostalgic heartstrings, maybe not so melodically, though her fun ball skirts-and-T-shirt looks, wax print dresses and sophisticated eco faux-leather pieces in leopard patterns made up for it).

It could also be that at this moment, when feminism is at the center of the zeitgeist (not just on Dior T-shirts), women want fashion to follow them, they don’t want to follow it. 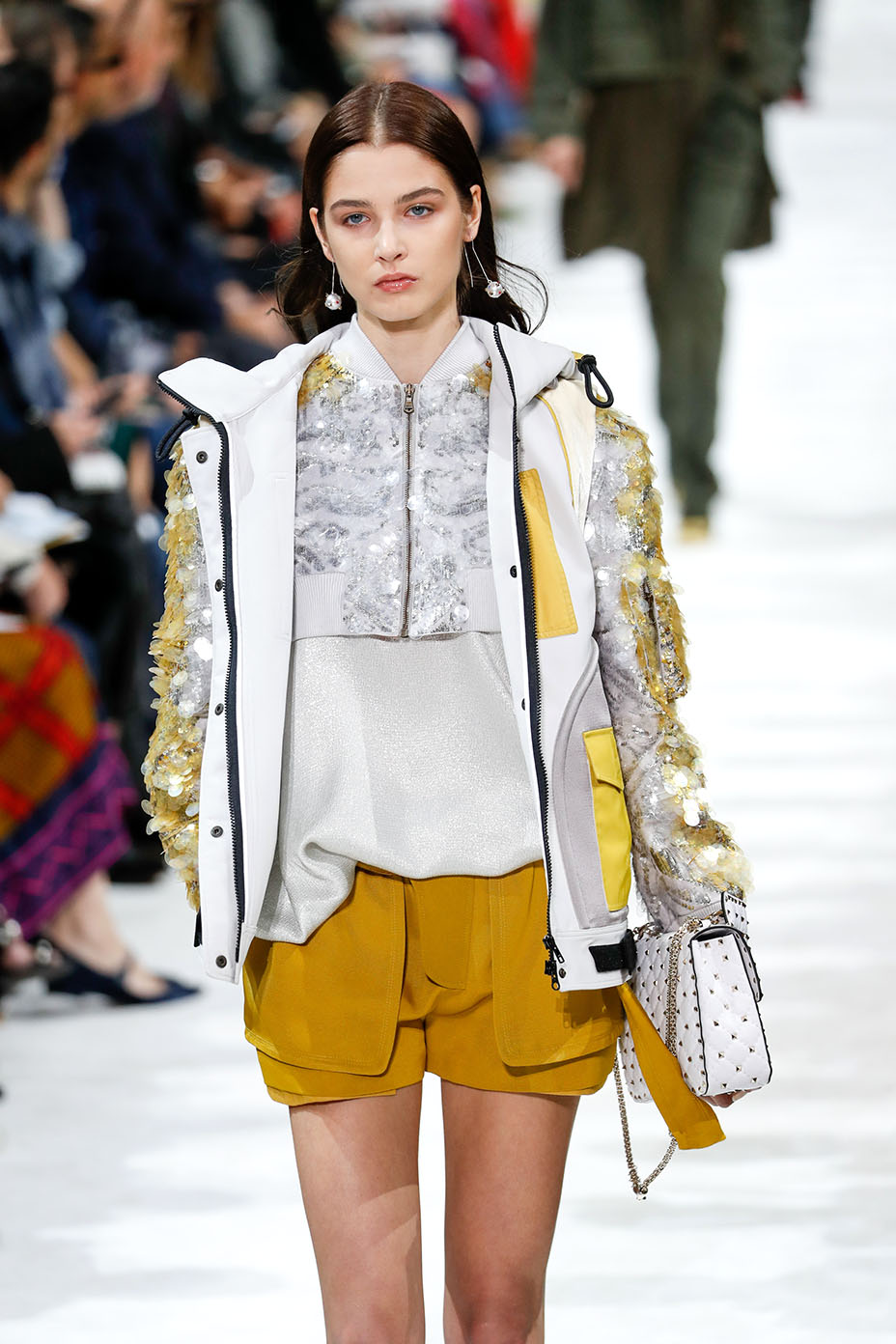 So on the Valentino runway, you have haute anoraks and Bermuda shorts that look like something the women of Big Little Lies would wear to school pick-up with Scuba sneaker booties. 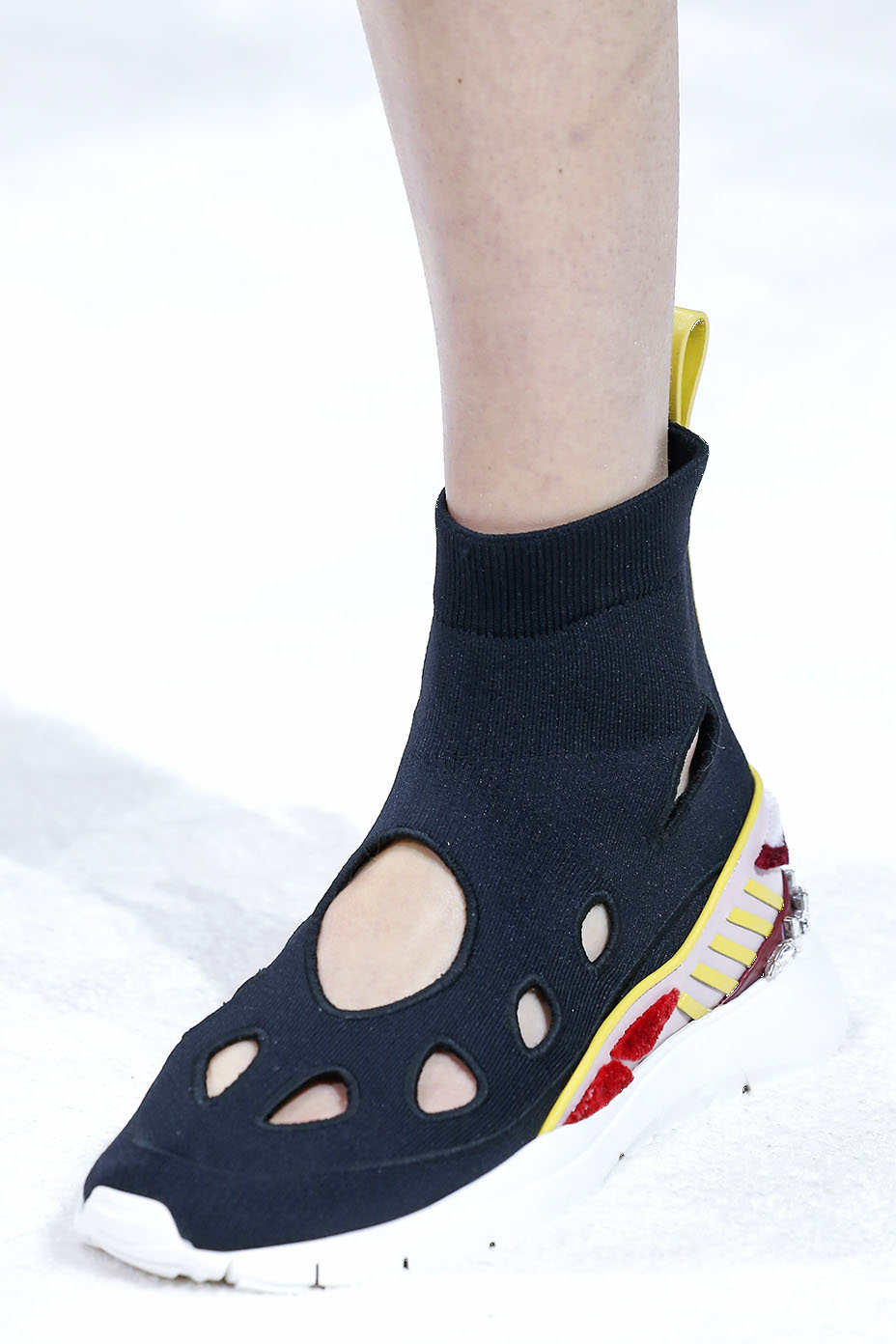 Of course, there were dresses, too, but nothing too fussy, and many of them looked as easy as sportswear, with racer back and tank straps like Lululemon layers. 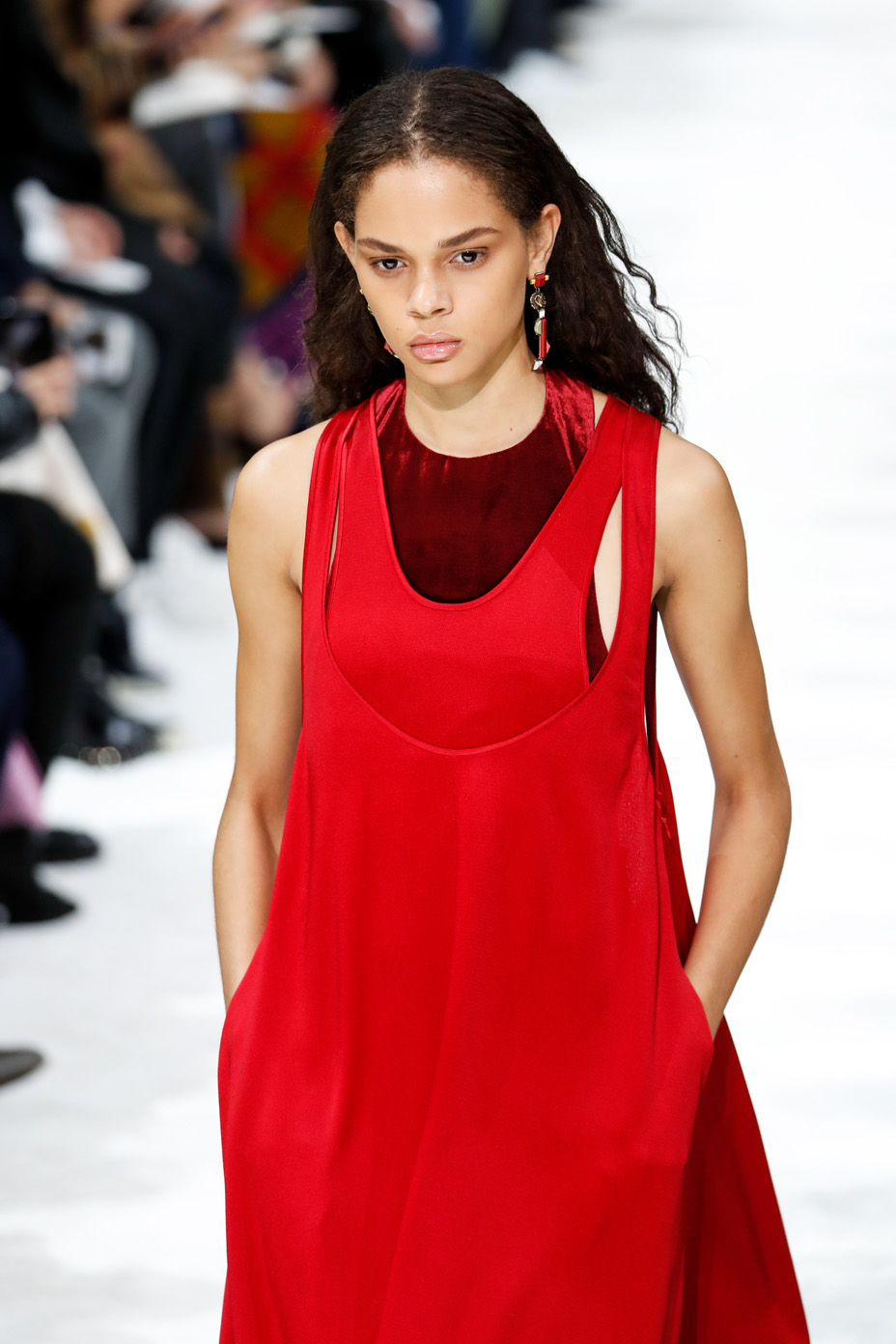 Red-carpet king Giambattista Valli (he showed denim, too), took a casual turn with dresses short and ruffly, styled with sweater vests and fur-lined sandals for a down-to-earth glamour. 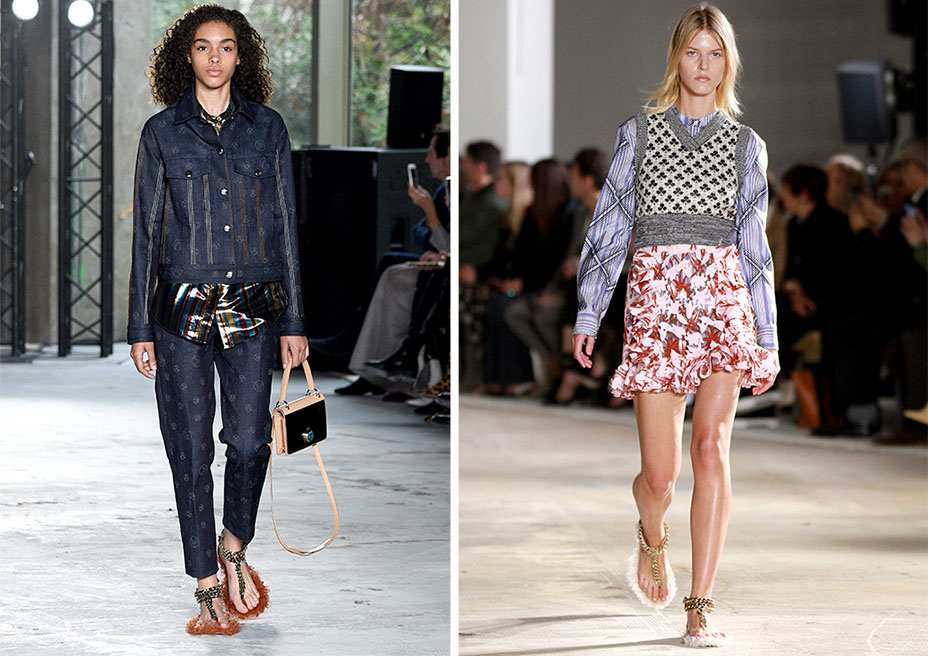 Now the trend of ordinary clothes on the runway does not have to mean boring. Because if you are going to spend designer prices, you deserve something above the rest, not just a flocked velvet lip print blazer that you’ve seen before (Givenchy, I’m talking about you). You deserve evidence that a designer has put some real thought into a piece, some added value — which is why the Celine collection, with double layer coats that folded up on themselves like tent flaps (offering an ingenious dry space under the arm to protect a handbag or papers) was so resonant. 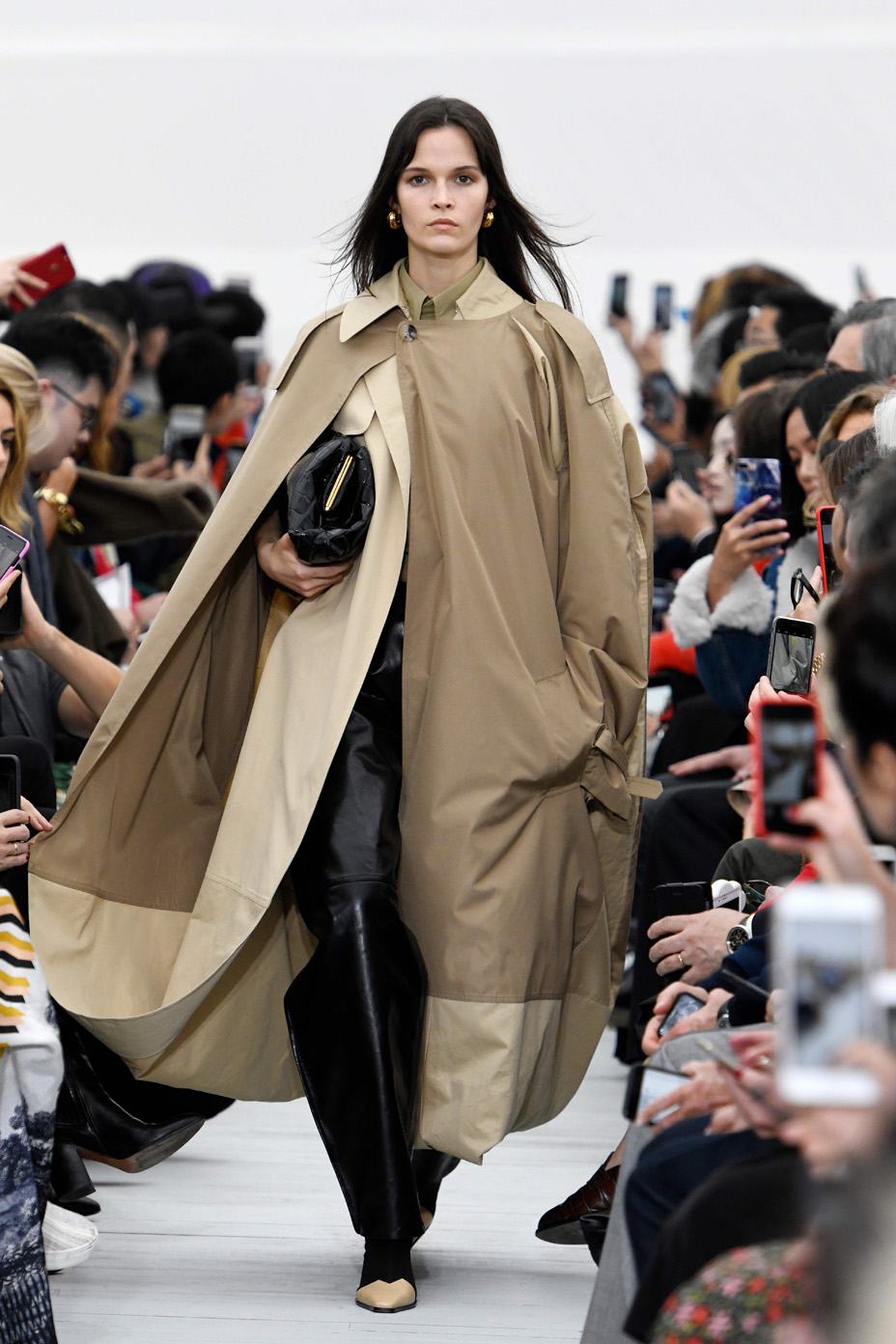 It’s also why Chitose Abe’s clothes for Sacai are so beloved by women. A navy blue crewneck sweater isn’t just a sweater, it’s got something special — half a point collar, a frill at the shoulder and a shirt tail in a jolly floral or plaid — that makes you smile every time you wear it. Even her version of an anorak stuck out in a good way — in a patchwork of Glenn check and military camouflage with a swingy shape. 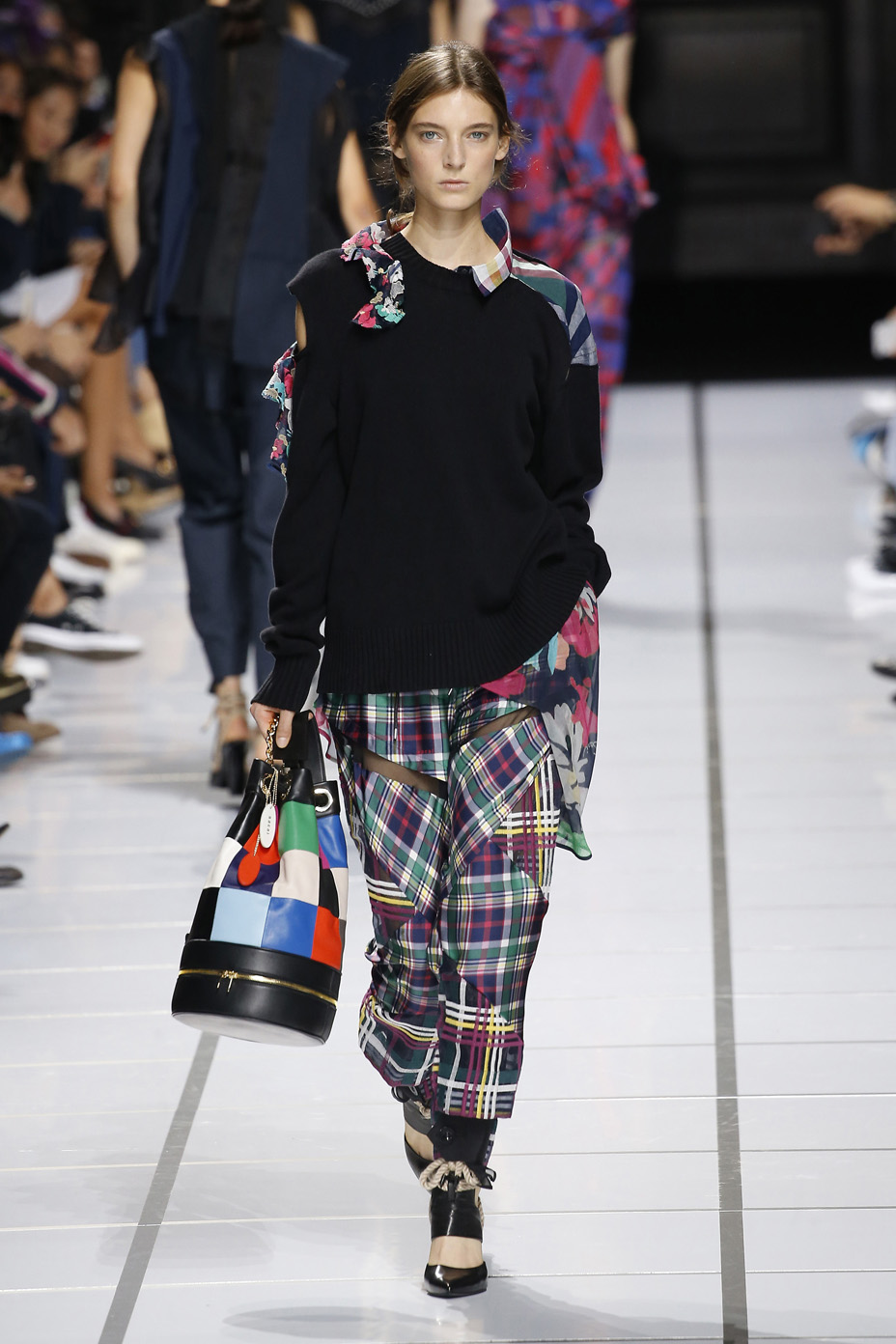 I’m all for kicking constricting clothing and heels to the curb in the name of comfort, but in Paris, where basic bread has been perfected, even the ordinary should be extraordinary. 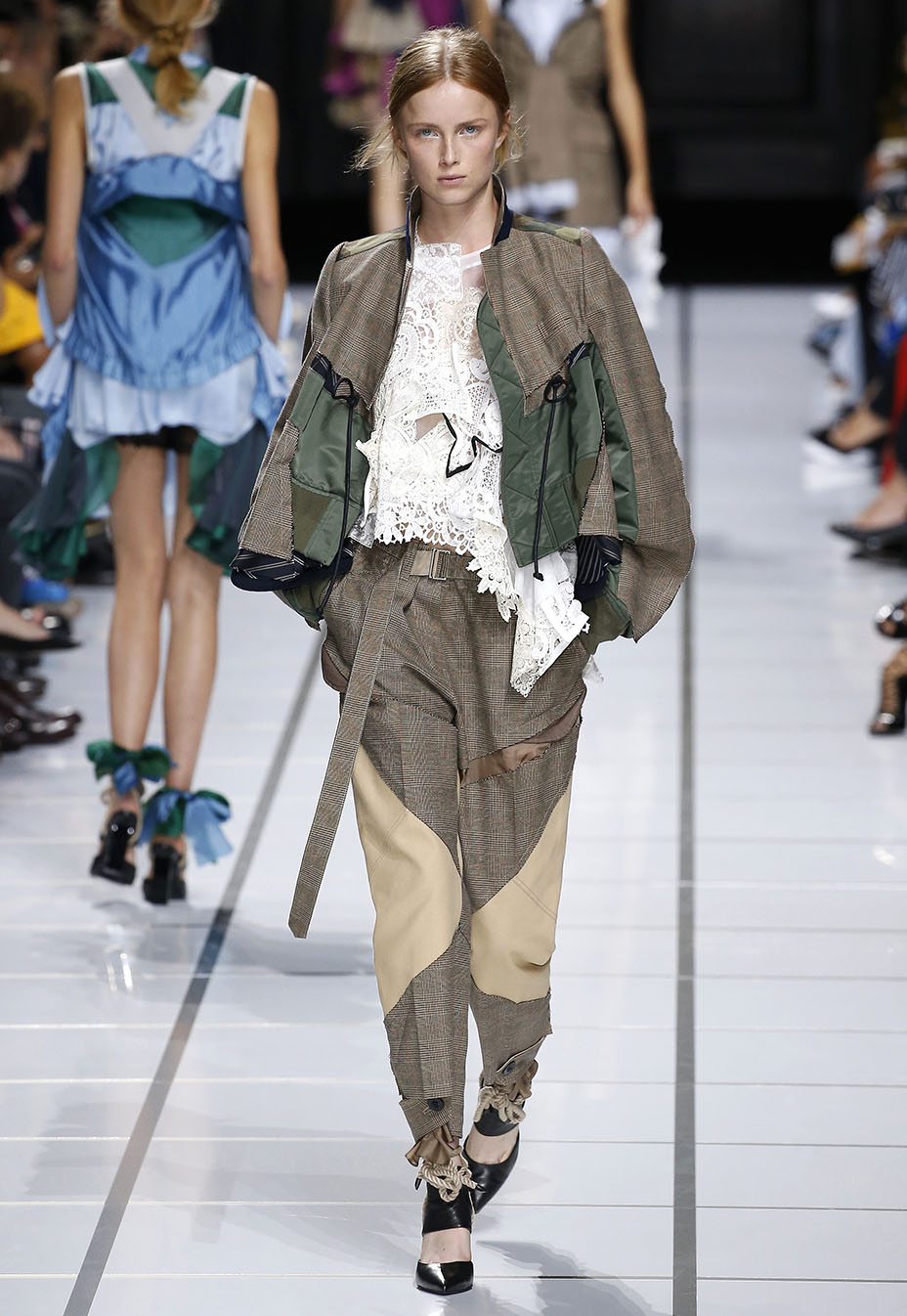