Just when fashion week was starting to wind down Tuesday night, designer/retailers Humberto Leon and Carol Lim perked things up with another stellar Kenzo happening.

The models stood so stone still, at first it wasn’t clear if they were real or not. But if you looked hard enough, you noticed breathing and blinking.

Cast from the street, they were men and women of all ethnicities, shapes and sizes, with curvy hips, large breasts, even an amputated arm. Next to the actual ancient sculptures, which of course also depicted all shapes and sizes, it made a potent statement about body acceptance, which has been a key issue this fashion season.

But this was just a prelude. Turns out the living statues and the runway collection that followed were inspired by the famous New York club Studio 54, where the brand’s namesake, Kenzo Takada showed his collection in 1977, with Grace Jones performing and Jerry Hall on the runway.

To capture the disco spirit 40 years later, Leon and Lim worked with the archives of disco photographer/artist Antonio Lopez, who was the subject of a show at El Museum del Barrio in New York City earlier this year. Lopez’s work documented the freewheeling fashion, music and party scenes in New York and Paris in the 1970s, and the designers used his collages, sketches and Polaroids in prints on garments. 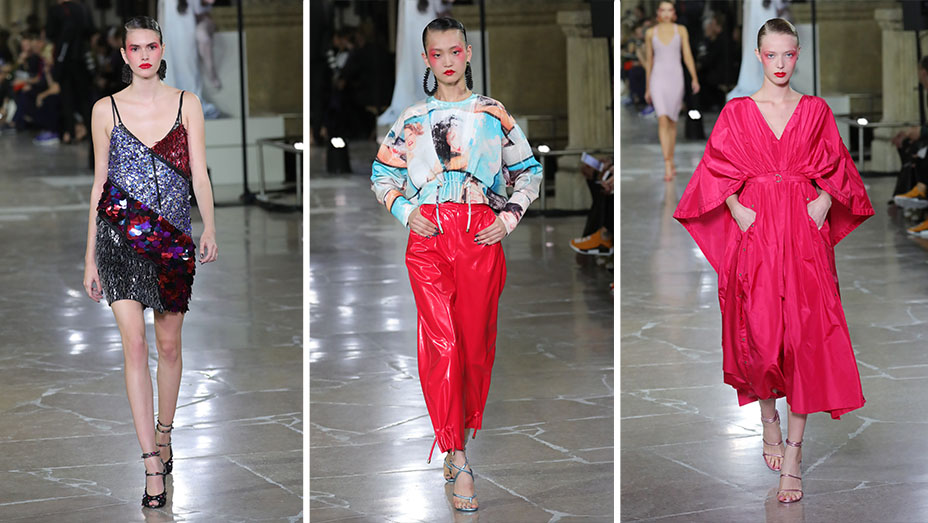 The collection was a retro rush, with airy ponchos and taffeta drawstring dresses, high-waist trousers and blouses with voluminous shoulders that would look right, right now. Chainmail cross-body bags added shine, alongside sequin earrings and metallic, coiled heels. I didn’t want the party to end.

There’s been a bit of disco fever this Paris fashion season — at Kenzo, Elie Saab’s “Standing On Stardust” collection, and even at Louis Vuitton.

On Wednesday morning, Nicolas Ghesquiere showed his spring collection for the house in a multistory structure on Place Vendome that will eventually become a new Louis Vuitton store.

Michelle Williams, Jennifer Connelly, Catherine Deneuve and others came out to watch the models descend the stairs and wind their way around rooms fitted with straight-backed chairs. 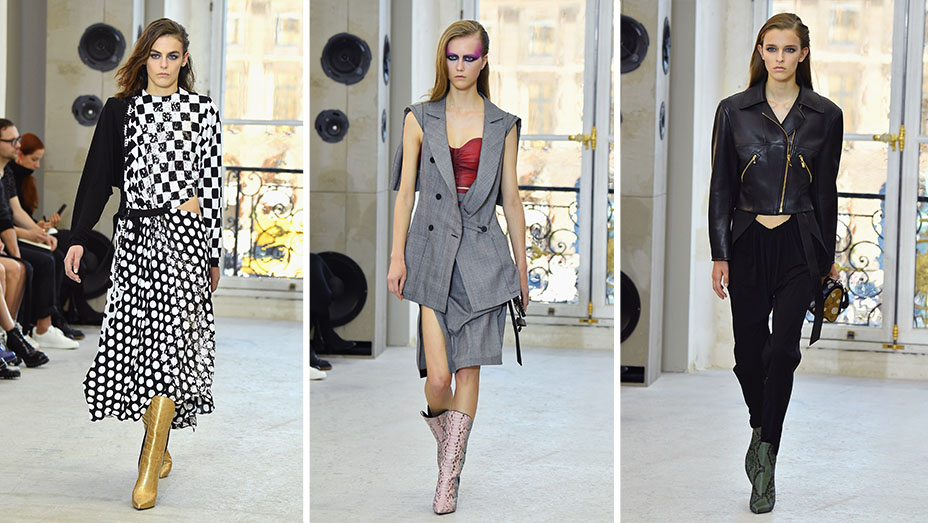 Ghesquiere tapped his beloved ‘80s, with a techno glam collection, ready-made for the disco, of sliced, cutout and draped dresses; asymmetrical blazers cut out under the arms with capelet details on the shoulders, gold embroidered leggings; pleated pants cinched at the waist with black ribbons; leather jackets and more.

The new bag is a mini (bags here this week have either been XXL or XXS), the size of a phone or a credit card, and the new shoe a midcalf boot with an LV monogrammed leather tab in back. Several models wore Lurex headbands, like Solid Gold dancers. 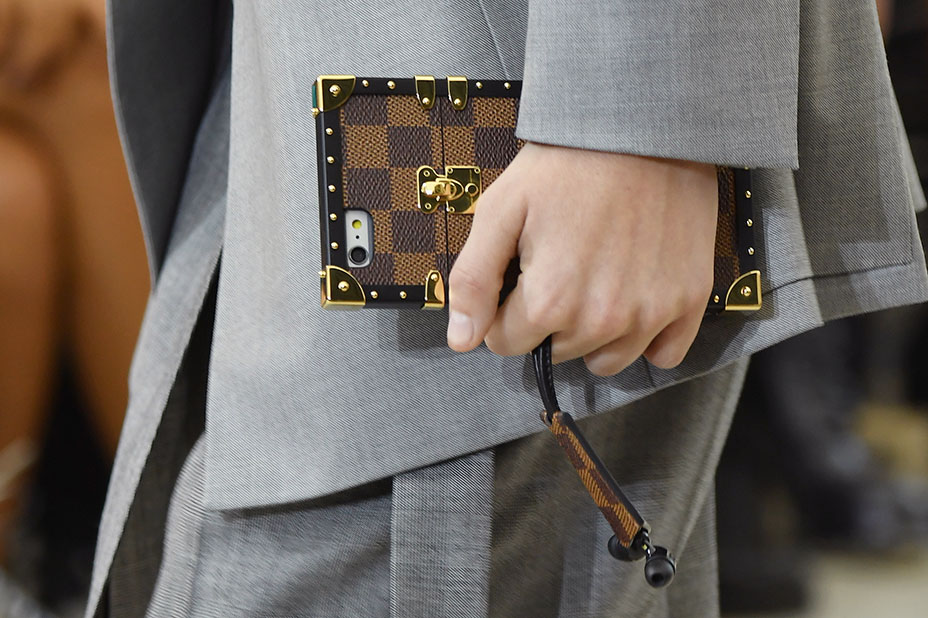 It was a lot to take in, too much really, and it seemed more Ghesquiere’s own sci-fi aesthetic than the elegant sportiness he’s been cultivating for Vuitton.

The highlight of the collection was the red-carpet looks, gowns of sheer netting, metallic embroidery and bodycon underpinnings that will do some edgy starlet proud. 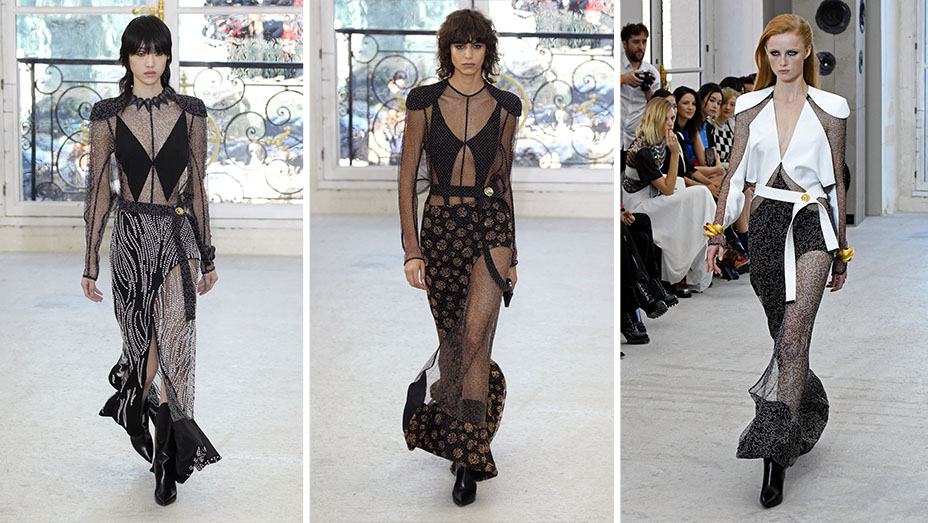 Starlets must have been on the mind of Miuccia Prada when she designed her bathing beauty–inspired Miu Miu collection, which closed out fashion week Wednesday afternoon. There were certainly lots of them in her front row, including Diane Kruger, Stacy Martin, Zhang Ziyi, Ella Purnell and Zoey Deutch. 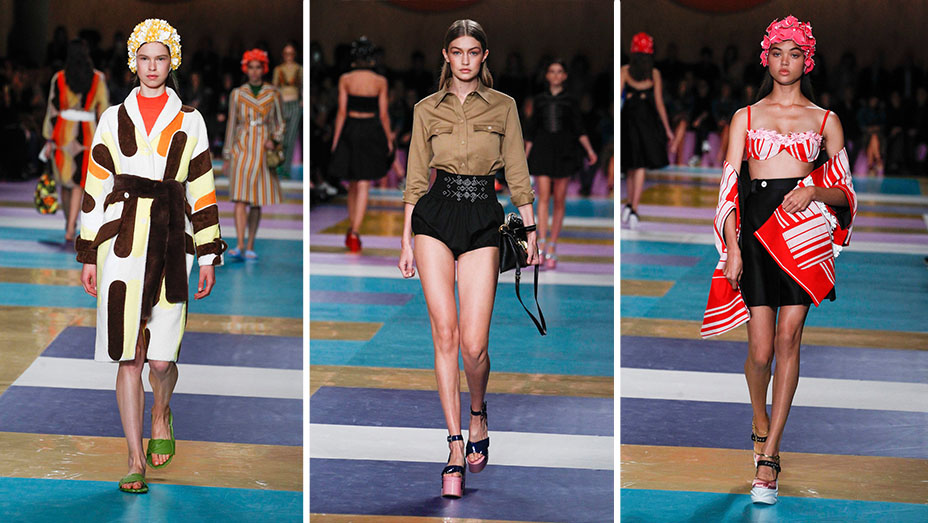 Shown against a colorful wood backdrop depicting a sun, clouds and a beach chair, it had me dreaming of home.