Why do we love Paris Fashion Week? Because the street is as much of a kick as the runway. Where else can you start your day seeing a gent wearing a homemade Donald Trump Supreme T-shirt, then mosey inside the Grand Palais and see a model walk down a runway wearing a shaggy tote bag for a hat? And all before noon on a Wednesday morning!

The hoopla was around Maison Margiela, the brand that’s long had a reputation for sartorial antics, now helmed by John Galliano.

The fall collection put a smile on my face, with its deconstructed and reconstructed wardrobe classics, including a trench coat with a cutout of the Statue of Liberty crown in the back and a varsity jacket pared down to the bare bones worn over a check blazer. 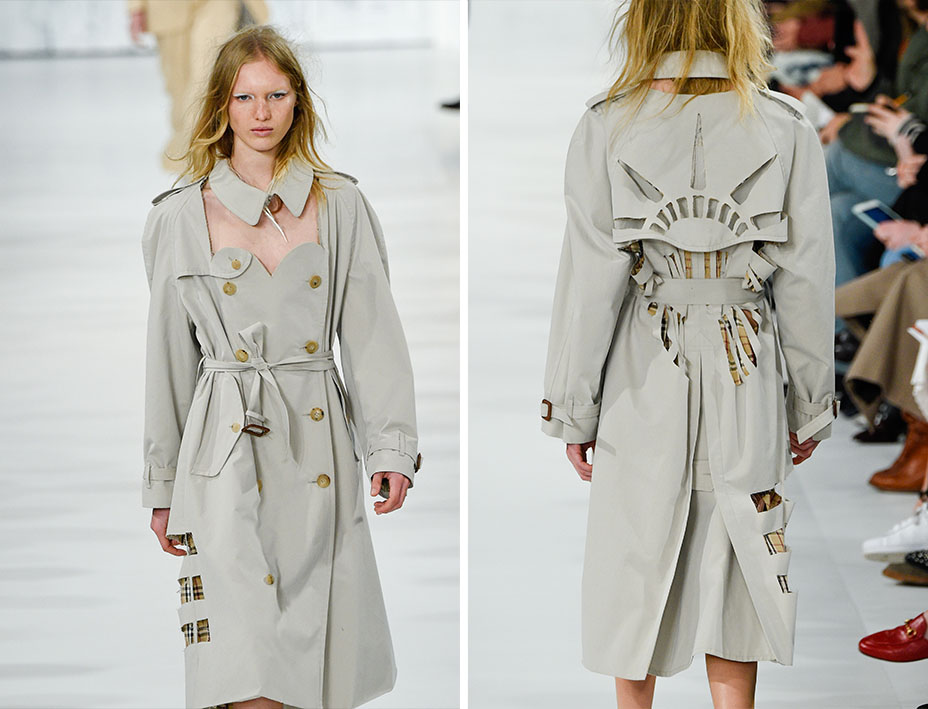 Galliano calls the technique “decortique,” and he first started playing with it in the spring 2017 Artisinal (couture) collection. It’s the method of bringing the inside out by cutting through layers of a garment to reveal its essence — the plaid check lining on a trench coat, for example, the navy blue dotted dress underneath a stencil of black velvet and chain trim or the framework of a cutout shearling newsboy cap. The opening looks were also a nod to Marilyn Monroe and iconic images of her, including the trench in look 1 and oversized black sweater in look 3. 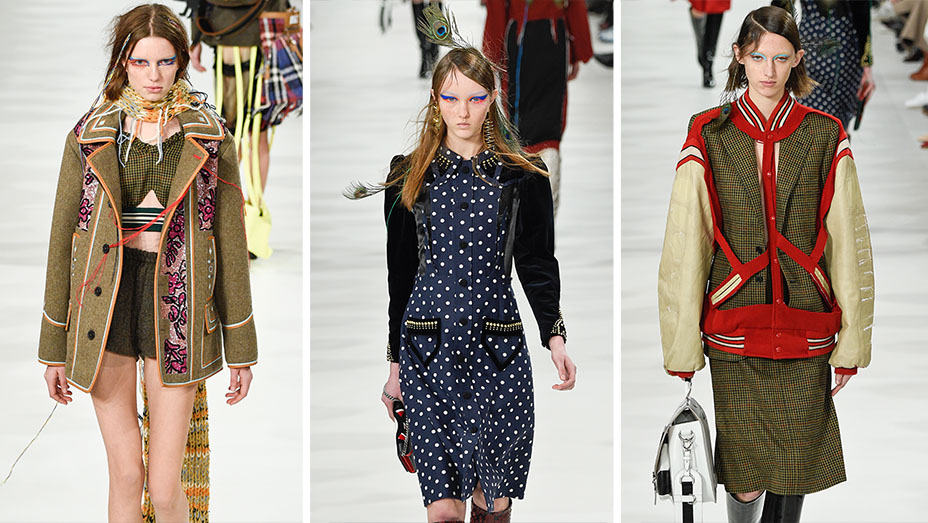 I appreciated the human hand and the craft in evidence on everything from an olive wool coat with tufted embroidery to the rainbow yarn hair extensions. And the house’s signature Tabi boots were a knockout in red snakeskin. 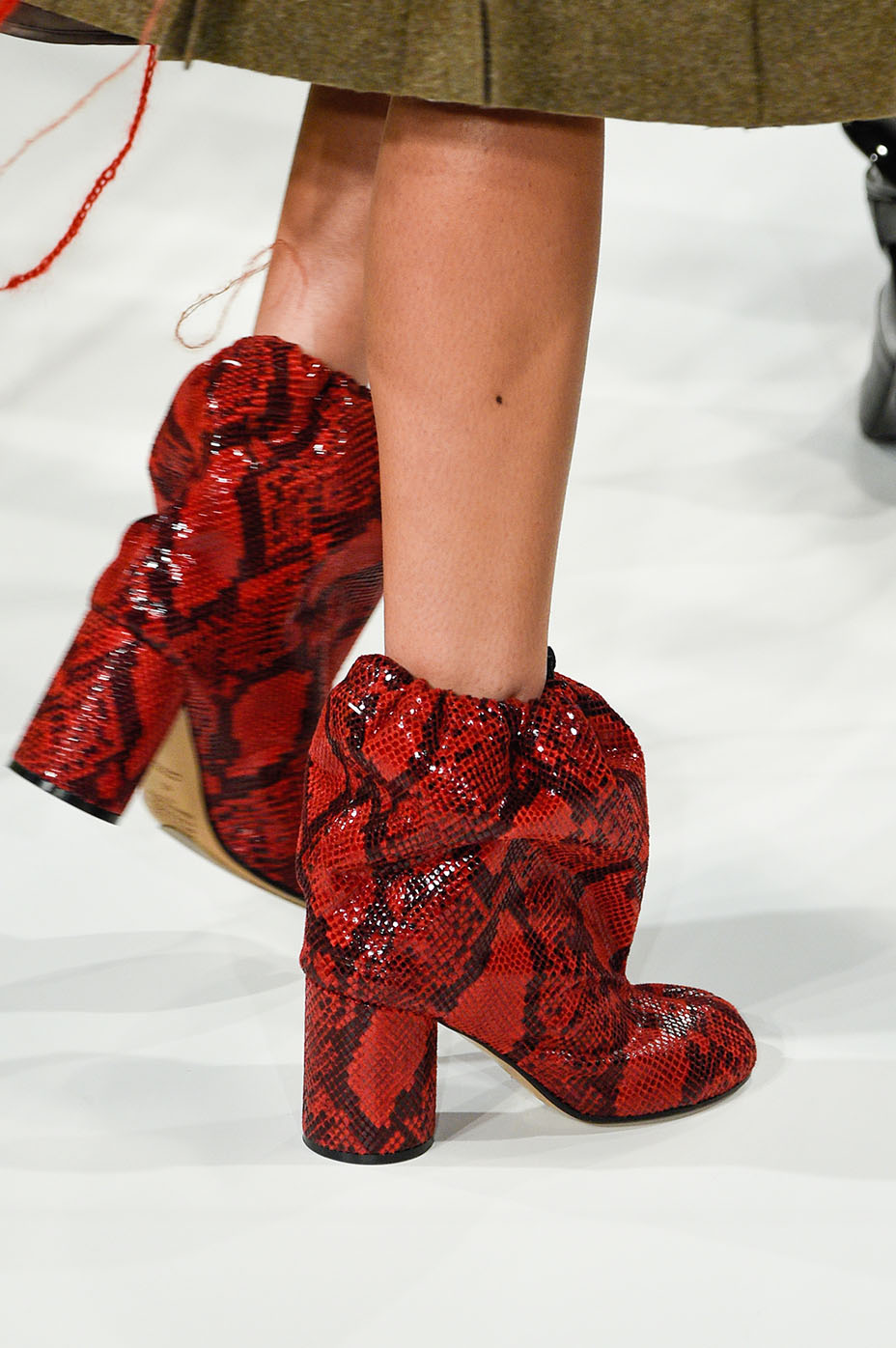 Things took a more refined turn at Bouchra Jarrar’s sophomore outing for Lanvin, where she continued to riff on masculine-meets-feminine dressing inspired by the boudoir and the ballet. 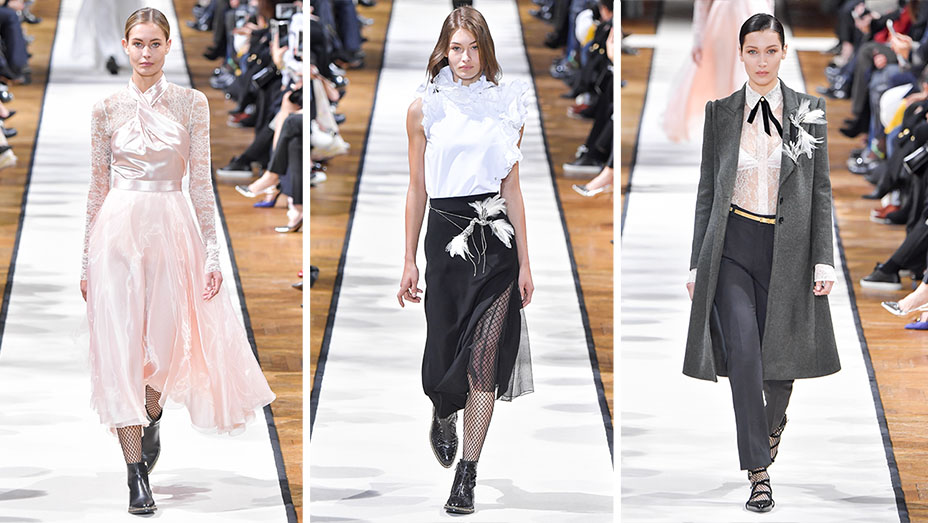 Standout looks included fluid silk trousers worn with a lacy blouse and embroidered slippers, a striped tweed coat worn over a slip dress and a ballerina skirt paired with cable knit angora sweater, fishnet stockings (they are everywhere this season) and chain-detailed flat boots for a contemporary take on dressing up. 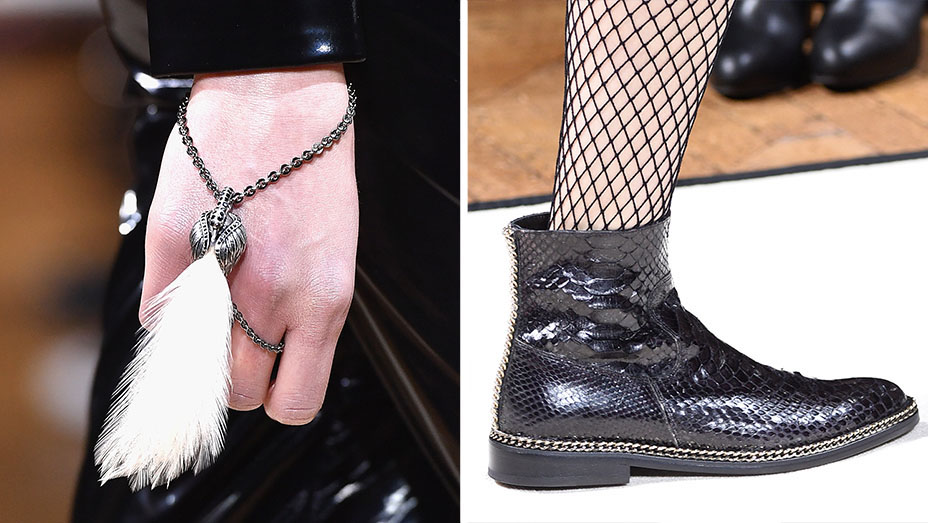 Jarrar’s new approach was on display at this year’s SAG Awards, where Naomie Harris wore a Lanvin striped jumpsuit with a black silk rose embellishment. 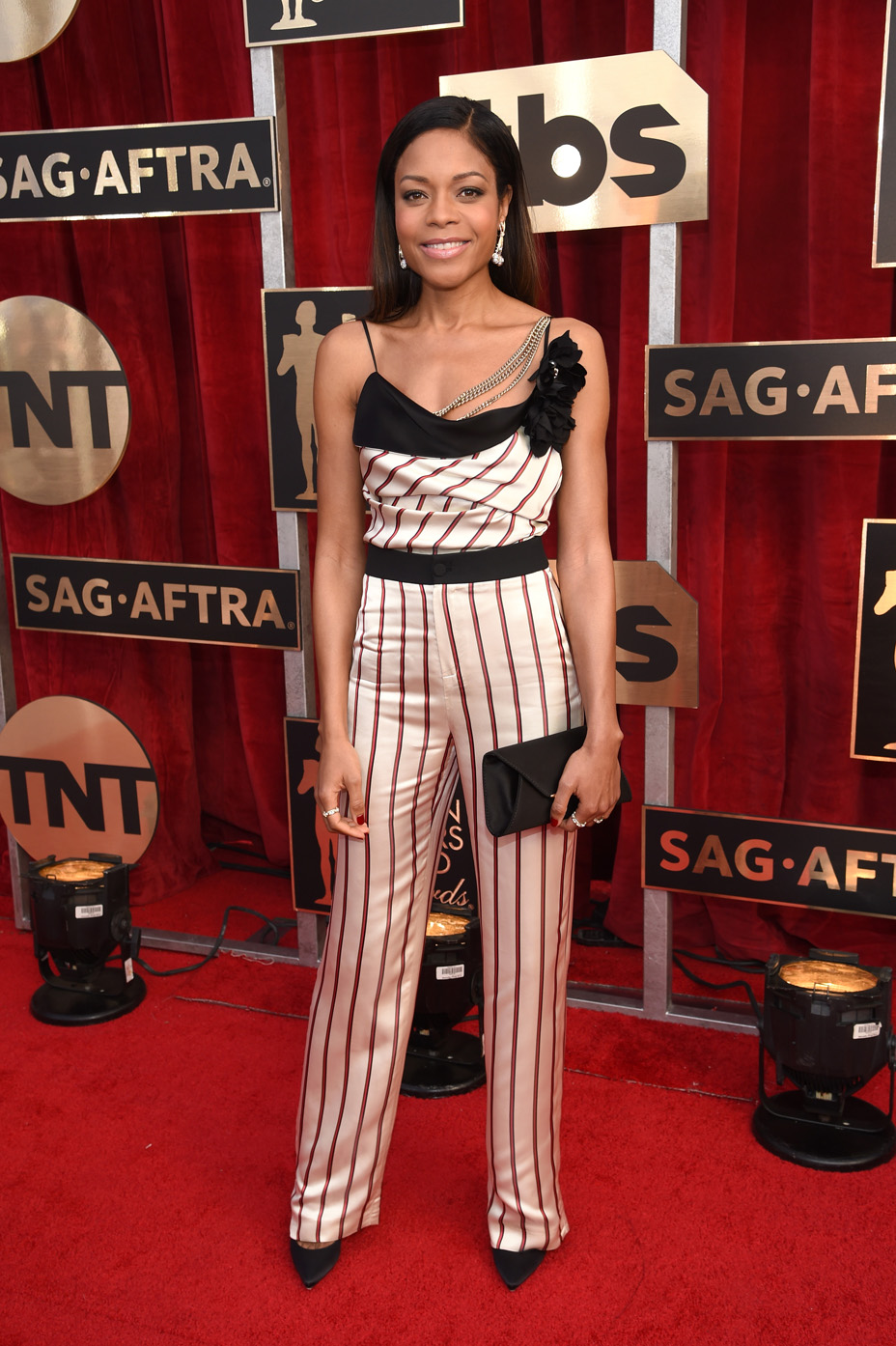 On the runway, she went wild not with roses but with bird motifs, showing feathered pins and waist and hand jewelry, as well as the now de rigueur mini bags. 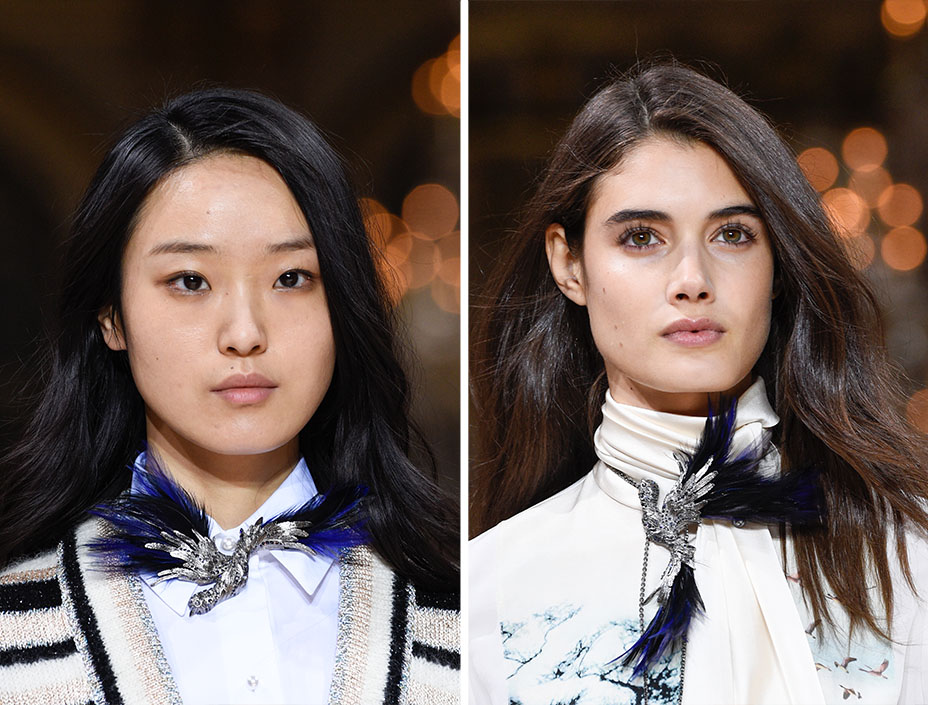 It was a fine collection, although some of the fabrics could have been more substantial, and more expensive-looking.

The celebration of dressing up continued at Dries Van Noten, where the Belgian designer known for his way with color and print celebrated his 100th runway show. He marked the occasion by placing a booklet on each seat featuring a favorite pattern from each season, from exotic florals to geometrics, each one a flower in his design garden.

For his 100th show, @DriesVanNoten puts together a book of his favorite prints over the years . #PFW pic.twitter.com/PnZrYIfeLd

Van Noten held his show in the decidedly unglamorous Bercy sports complex, where even Catherine Deneuve had to tromp through puddles and past sports hobbyists on the way to the rink.

Inside the bare-bones auditorium, there were enough folding chairs to give everyone a front seat. And once the show started, Van Noten proved why he is such a master. By simply using music (everything from Bernard Hermann’s love theme from the film Vertigo to David Bowie’s “Heroes”) and mirrors lining the entire length of the auditorium to reflect models as they floated down the runway, and his audience, he was able to create the most cinematic show we’ve seen on the runway in Paris thus far. 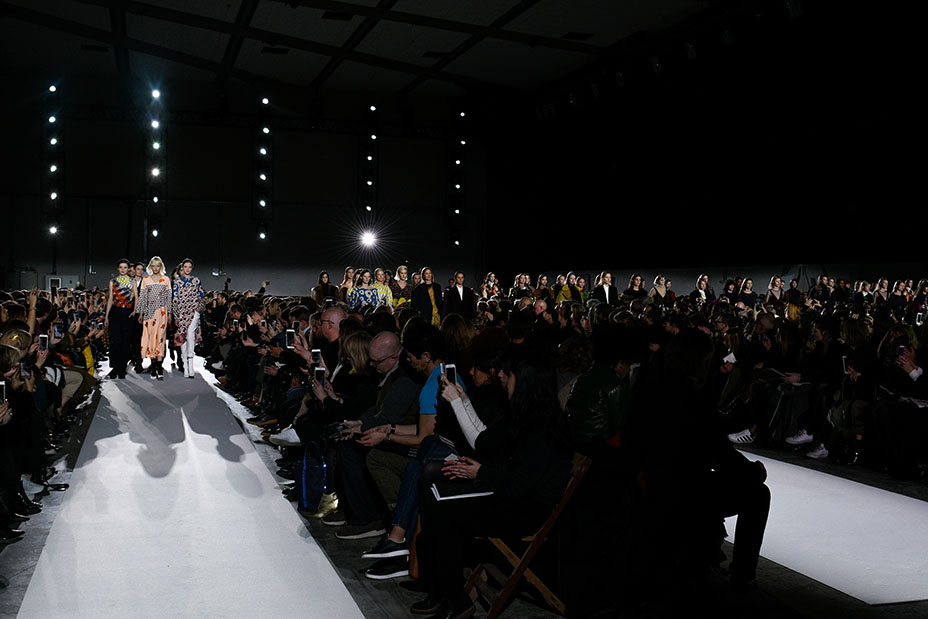 The collection was an ode to modern, down-to-earth glamour, complete with an all-ages cast that included thirty- and forty-somethings Carolyn Murphy, Amber Valetta, Alek Wek and Erin O’Connor, plus a few older ladies, too. The clothes reused many of the designer’s best-loved prints, which some women probably still have in their closets. It was a fitting statement on a 100th anniversary: What’s old is new, what’s new is old; the freedom is in how you wear it. 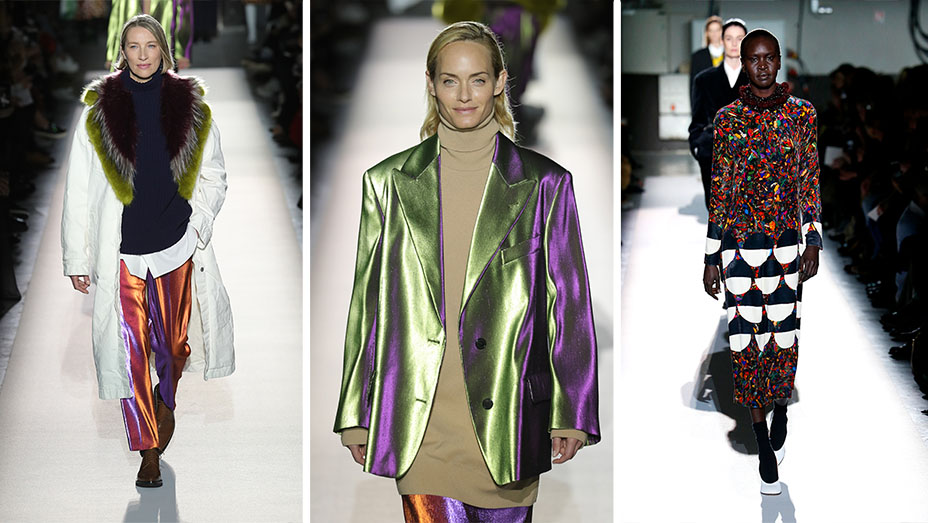 The silhouette was oversized, a classic female power look. A white blazer was worn over patchwork denim, and a quilted print jacket over baggy trousers. Van Noten showed several mixed-print dresses, some in velvet, that looked like the easiest thing to slip on, worn with white boots or pumps with jewel-like heels. Iridescent trousers were pure glam rock, but in a ‘wear on the street’ and not on the stage kind of way.

When Van Noten came out to take his bow, he got a standing ovation. But the collection felt like an ovation for all the women who have made his career, all of his heroes. 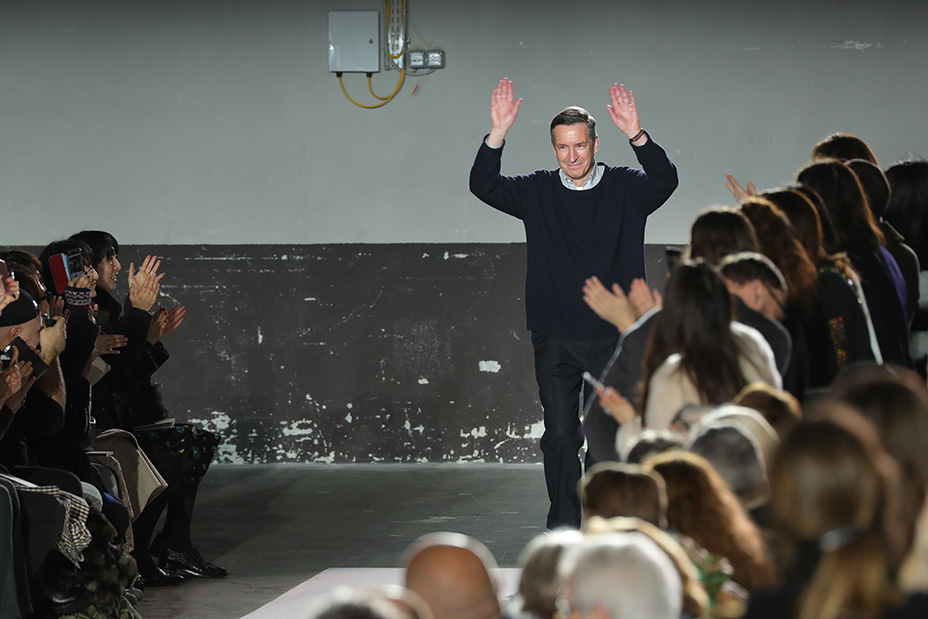 See All the Looks From Dries Van Noten's 100th Show