Can you be a revolutionary in Dior?

That was the question that came up when watching the march of berets on the runway at Maria Grazia Chiuri’s fall 2017 Dior runway show, for her second ready-to-wear collection as the first female artistic director of the house.

Dior Does Denim and "Out All Night" Makeup

Chiuri already set a political tone in October, when she showed “The Future Is Female” T-shirts on her runway, months before anyone knew that the Trump presidency would spark a revolution of its own, and women’s marches around the world.

This season, she took it further, conjuring imagery of true revolutionaries, including the Black Panthers and Che Guevara, with a fashion accessory, the leather beret.

It’s @rihanna at @Dior and the girl arrives with an entourage 100 deep #PFW pic.twitter.com/fk2hIJAt2L

Before people go off being offended, Rihanna, who is a face of Dior, walked in wearing one of the hats before the runway show even began, and dragging an entourage 100 deep behind her. The flat hat also happens to be the unofficial national headgear of France, worn by the police and the military, too. So as much as it divides into camps or defines by organization, cause or country, it also unites. It’s a hat that’s worn by anarchists and militia, protesters and police. It’s a hat for everyone in a runway season that has been headgear heavy, from the Pussyhats at Missoni, to the mitres at Rick Owens.

As a visual effect (and must-have accessory to rally women around the brand), it was a no-lose, since berets are associated as much with Pablo Piccaso as Angela Davis. No doubt Dior’s berets will not be cheap; those feminist T-shirts are $750, but the brand was able to deflect criticism by donating a portion of proceeds (we still don’t know how much) to charity, namely Rihanna’s The Clara Lionel Foundation. It’s possible the berets will be treated similarly. And actually, Dior might want to price them more reasonably if they really want to start a fashion revolution. 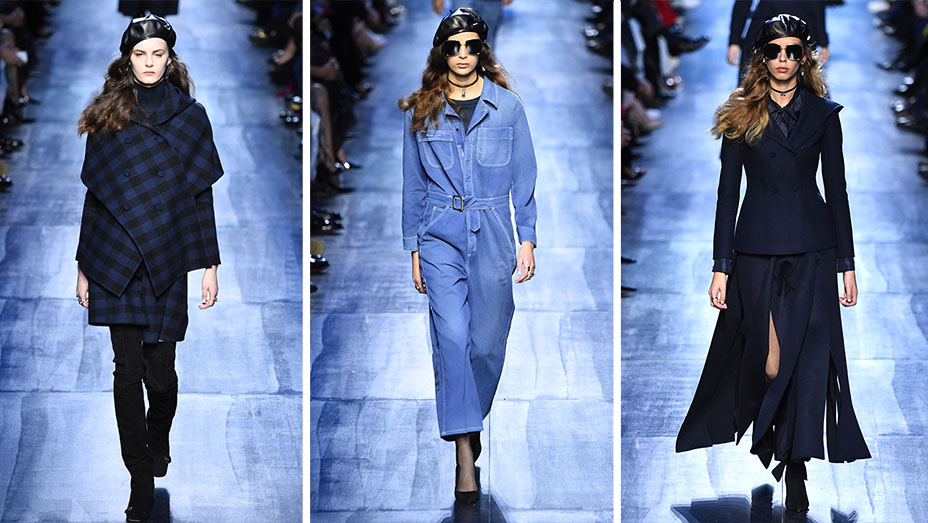 Aside from those headline-making hats, Chiuri’s collection was nearly all blue, bringing out the nuances of her designs, which spanned from beautiful tailoring (cape jackets softly wrapping the bodice in origami folds and double-breasted blazers with modern-looking hoods), to a denim boiler suit. That’s right, what the plumber wears was on the Dior runway.

The designer said in the show notes she was inspired as much by work wear as by a 1949 Dior couture collection, and clearly, judging from last season’s foray into fencing outfits, she enjoys a good uniform. Several pieces came in a blue buffalo check pattern, there were canvas jackets and jeans, too, and last season’s midi-skirts, one a shredded blue tulle, worn with a yummy cable knit fisherman sweater. There were also more elevated pieces, including delicately embroidered tulle ballet skirts, an idea Chiuri continued from last season, and a midnight blue dress with dropped shoulders and lace sleeves. 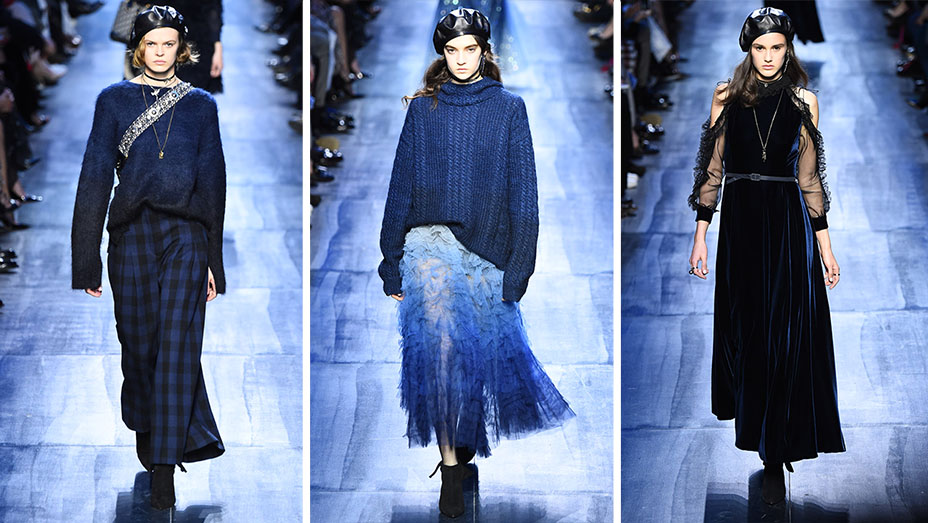 But nothing looked too fussy. What Chiuri succeeded in doing was finding common ground between casual and dressed up, humble and noble. It felt right for right now. These may have been designer clothes, but they looked like designer clothes that could fit into any woman’s wardrobe, whether she be Rihanna or the revolutionary next door.

Finally a piece of clothing my postulant sister and I can agree on! @dior #pfw pic.twitter.com/uANtcrd7pH