Clare Waight Keller bid adieu to Chloe after six years on Thursday with a Fall 2017 collection that was a shining example of how successful she was at revitalizing the French fashion house.

All the elements of the brand were here, from boho to sweet romance to apres-surf, and so was style superstar Solange, sitting front row in a lacy white maxidress a few seats away from Oscar nominee Isabelle Huppert.

Solange soaking in the scene at the @chloefashion show #PFW pic.twitter.com/g42C76HCfC

Chinese actress Tang Wei also caused a stir, followed up the steps of the Petit Palais by a phalanx of photographers and her own personal groomer.

On the runway, the collection was inspired by “an edgy dream world of psychedelic optimism,” which translated into a retro, ‘60s brushed check double breasted coat, smocked blouses worn under pinafores, and sweet mini-dresses in starry lace or a groovy faces print. Haute fleece jackets, oversized faded stripe mohair sweaters and color-blocked warm-up suits in nylon or suede looked made for apres surf Malibu. (Although she’s London-based, Keller is an L.A. fan and often vacations on the coast with her family.) 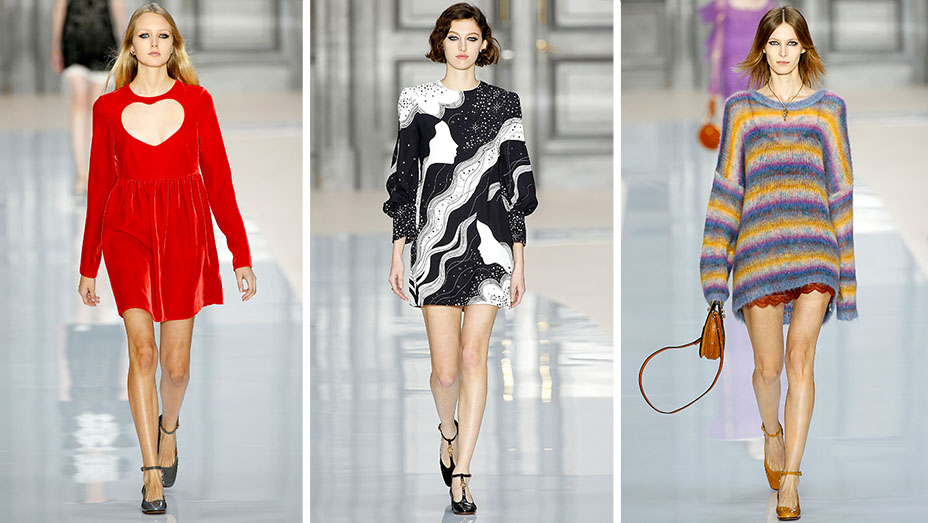 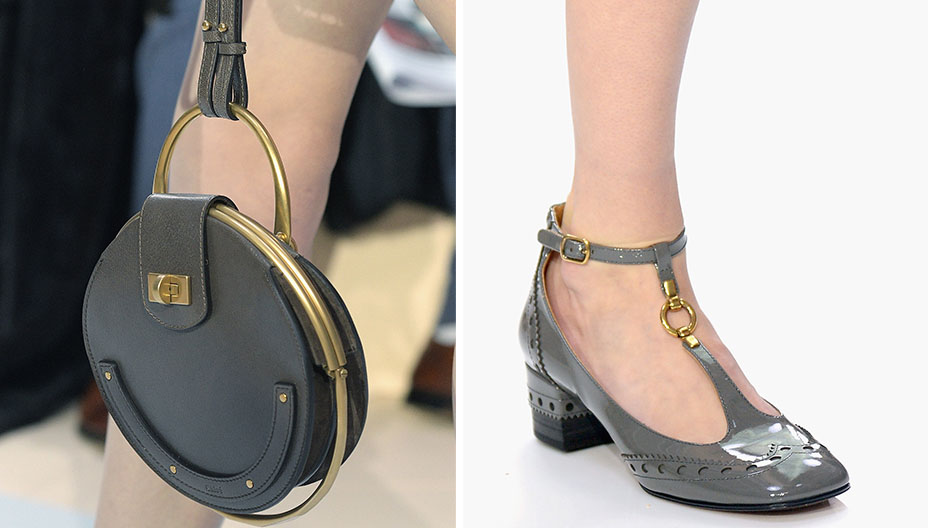 Keller has a knack for creating must-have accessories, and this season was no different; the looks called for T-strap Mary Janes with rounded toes or flat loafers, and spring’s bracelet bag was updated in a larger, more rounded shape.

The designer always has upbeat music at her shows, with a preponderance of American rock ‘n’ roll, and she may have had the most perfect finale song ever for someone on her way out: Human League’s “Don’t You Want Me.” Yes, we do, and we can’t wait to see where you go next.

The big afternoon show was Balmain, held at the always lovely Hotel Potocki. It was a Kardashian-free zone in the front row, unlike last season, before the infamous robbery, when Kim, Kourtney and Kris Jenner were at the show to support Olivier Rousteing, the designer they helped make by wearing his super-sexy, skintight designs and promoting them on their social media channels. This season’s celebrity eye candy was Nick Jonas, who took in the lengthy runway show like a champ, even if he did look like he could have used a disco nap as the number of looks topped 50. Zayn Malik and Anais Gallagher (daughter of Oasis’ Noel Gallagher) were also in the front row. 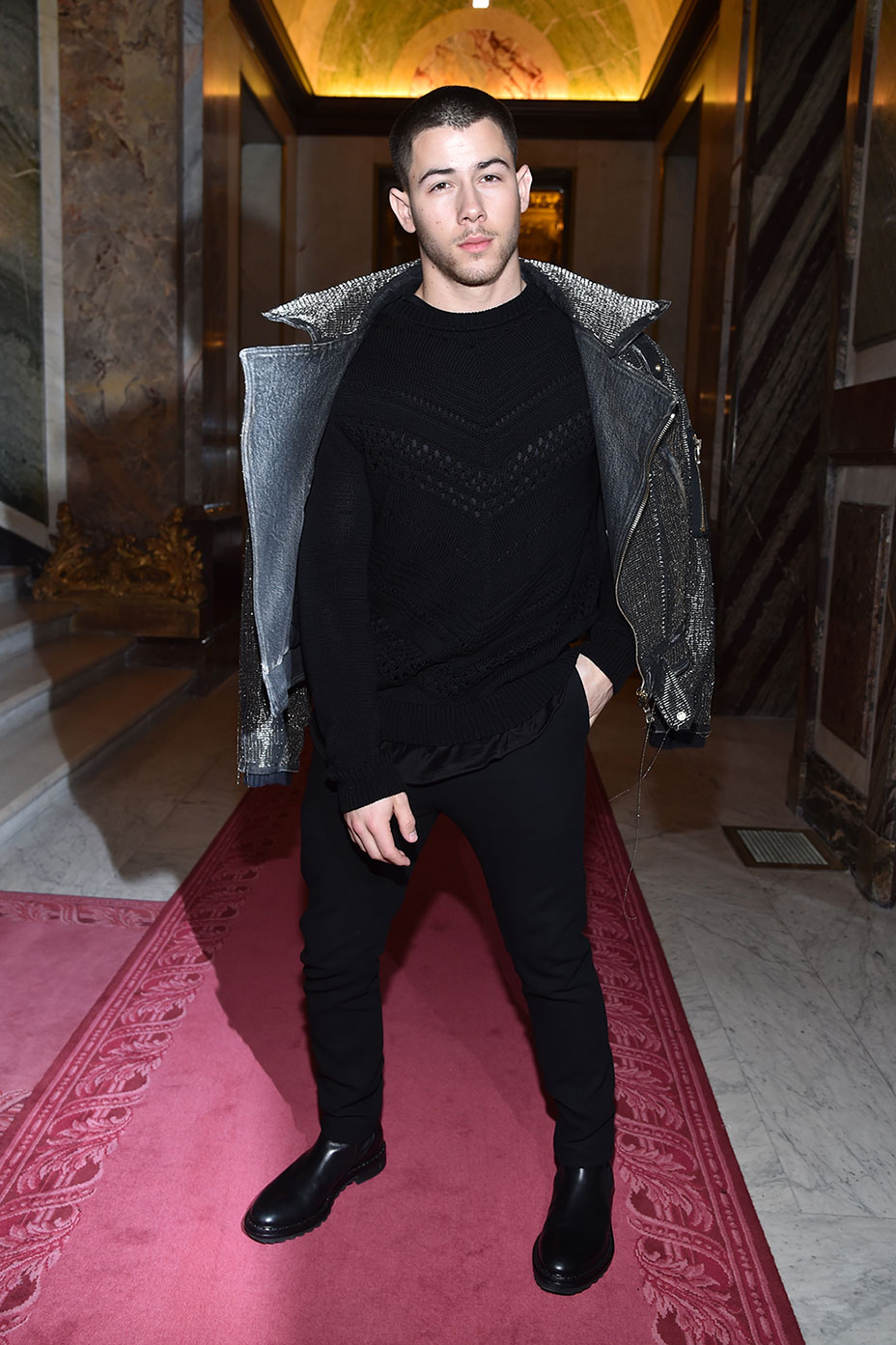 The inspiration was oddly specific and broad at the same time: “Nirvana on a road trip through the Serengeti, the Far West and Amazonia,” according to the show notes. The show did start with “Smells Like Teen Spirit,” but that’s where the grunge ended and the glam Gigi Hadid and Kendall Jenner fest began.

Really, the collection was about rock ‘n’ roll, which is where Balmain found its recent success, first under former design director Christophe Decarnin, who from 2006 to 2011 revived the brand first with heavily embellished (and uber expensive) jackets inspired by Michael Jackson’s gold-braided, gold-buttoned military looks.

Rousteing, who took over after Decarnin, reached back to rock ‘n’ roll for this collection, which was beaded, fringed, studded and chain-embroidered to within an inch of its life. The workmanship was something to behold, and many of the looks will no doubt make it onto the red carpet. (Paris Jackson, daughter of Michael, wore Balmain at the 2017 Grammys.)

There was a Serengeti’s worth of animal and cow prints on patchwork dresses, as well as easier knitwear pieces (high waist knit trousers and capes) which have been a through line for the past couple of seasons.

But what I liked most were the “so bad-they’re good” T-shirts in airbrushed wolf prints, road-trip landscapes and more, worn under embellished jackets. Forget Nirvana, they were metal head cool. 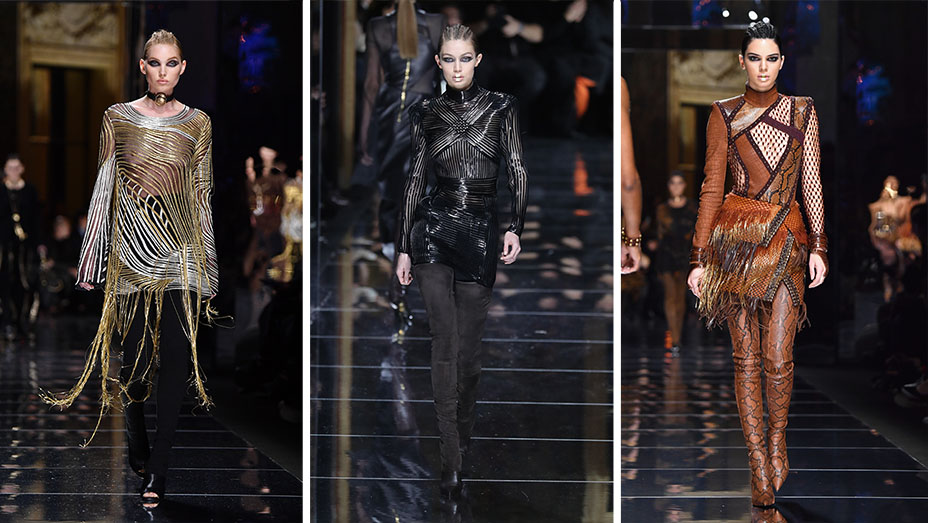