Elle Fanning, usually a front-row regular, flipped the script when she stepped foot on the Miu Miu catwalk Tuesday, strutting to a mix of “Mickey” and “Whip It,” that signaled Miuccia Prada’s ‘80s intentions. Fanning’s first look was an A-line camel coat; she closed with an oversized herringbone and leather coat topping a buttoned-up blue blouse.

The looks were a combination of big-hair-don’t-care wild bouffants and oversized jackets with popped collars, mini-dresses with skinny Grace Jones glasses, pointy patent shoes and ankle boots, with colorful scarves tied around the neck — very Pink Ladies meets Pretty in Pink. The models walked along a maze of white flags sketched like tarot cards and mixed-up letters. The only word that was completely legible was “comportment.” If the collection was all about proper behavior, Prada’s good girl had gone bad.

Plus, she threw in some acid-washed jeans for good measure. 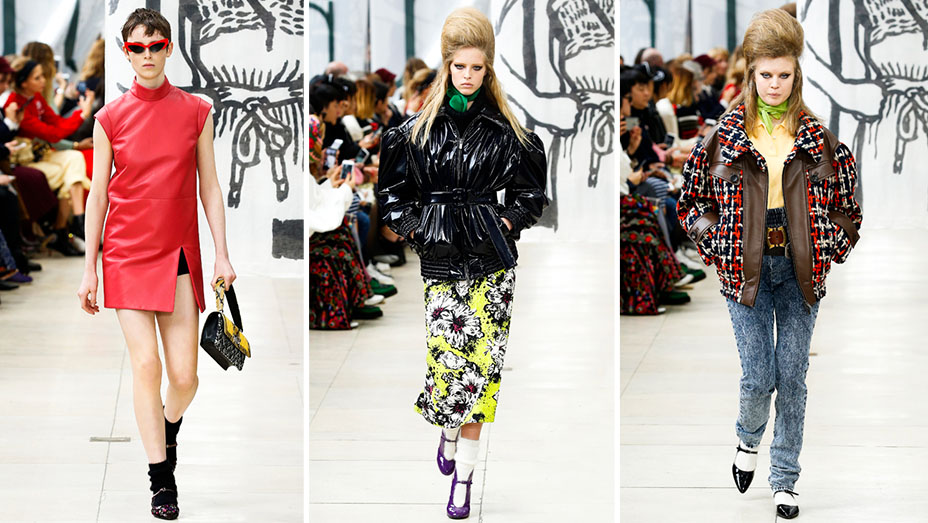 Those were of particular delight to David Harbour, who plays the sheriff on a little ‘80s-set Netflix show, Stranger Things. Girlfriend (and Fantastic Beasts star) Alice Soudal brought him to his very first fashion show. “Did you spot me from a mile away? I don’t really belong. I’m not a guy that goes to fashion shows, I mean, look at my facial hair alone,” he joked, but expressed admiration for Prada’s work. Plus, he vowed to suggest it to the Stranger Things costume designers. “The acid-washed denim is like right out of 1982 — I would love that, Hopper would look really fabulous in it.”

Rami Malek also made the front row in a pink suit as the guest of co-star Lucy Boynton, though he wouldn’t divulge any info about their upcoming Bohemian Rhapsody film.

Dakota Fanning didn’t make the front row this time, but she did just direct her first film for the brand, the dreamy short Hello, Apartment, which premiered during London Fashion Week.

Dakota Fanning Opens Up About Her Directorial Debut, Producing and Time's Up