It’s been nearly a year since allegations of Harvey Weinstein’s sexual abuse kicked off a reckoning that has reached every industry and seat of power. In the months since, and on the runways in Paris this season, designers have tried to respond to the new wave of feminism (with varying degrees of success) by reviving the power suit, ditching heels for sneakers and other sensible shoes, and showing collections striving for some mixture of “strength and softness,” as Stella McCartney put it.

But maybe what women really need right now is a break, and on Tuesday morning at Chanel, Karl Lagerfeld gave it to them.

Under the glass ceiling of the Grand Palais, he built a beach, complete with sand, softly lapping waves (as in, real water), a boardwalk and tiki hut. The first model came out in Chanel’s version of the power suit, a white tweed pencil skirt and jacket, accessorized to the hilt with chain necklaces and a ruby red pout, her life so full of responsibilities it took not one, but two black quilted handbags to contain it. Clearly, she had had enough, cast off her shoes, and decided to let her toes touch the sand, taking a walk along the shore toward the horizon. 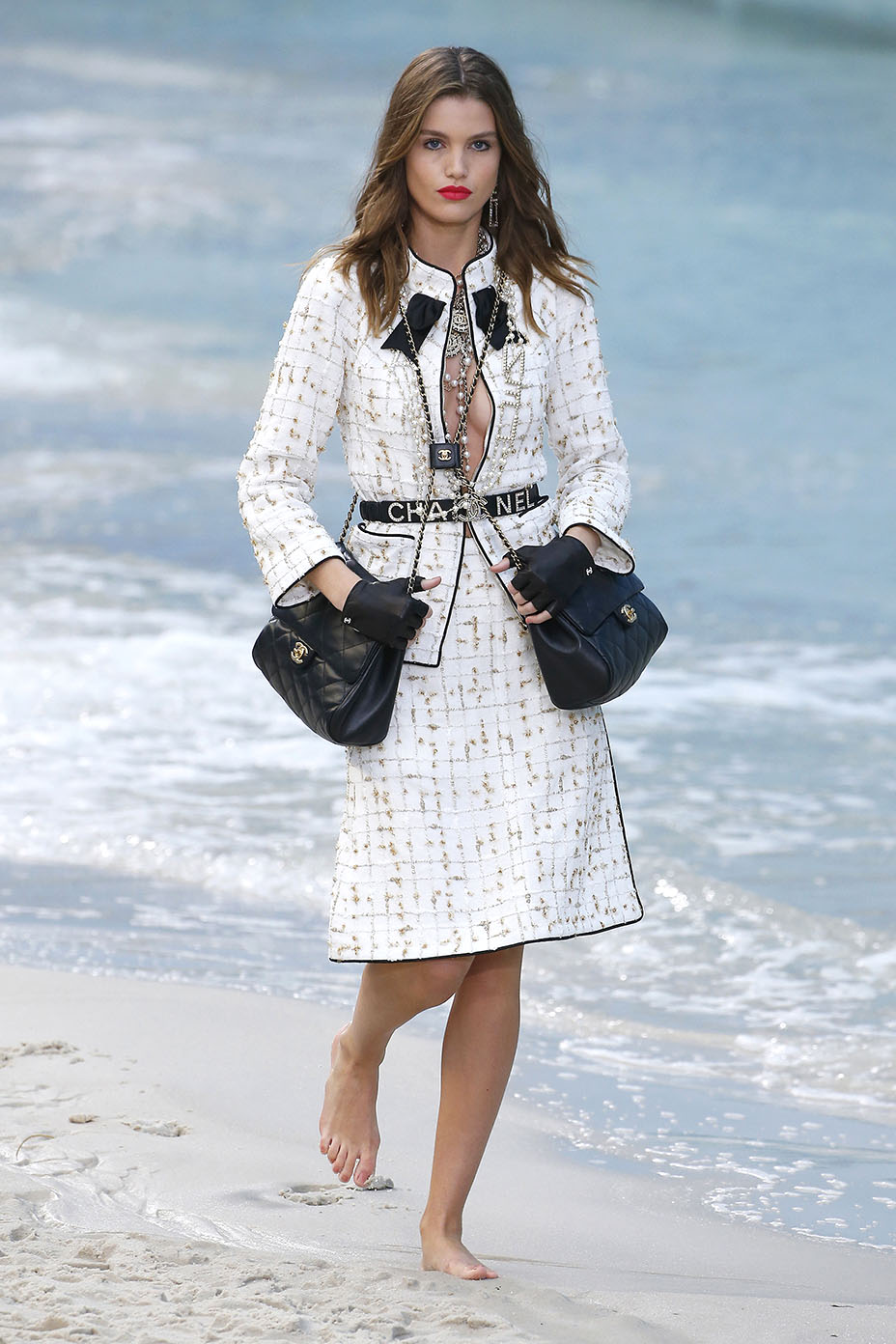 By the third or fourth look, Lagerfeld’s woman was out of her pencil skirt altogether and into her favorite black leggings. The tailoring on her jacket had loosened, too, into something comfortable and boxy, and the mood of the clothes eased into relaxation mode. 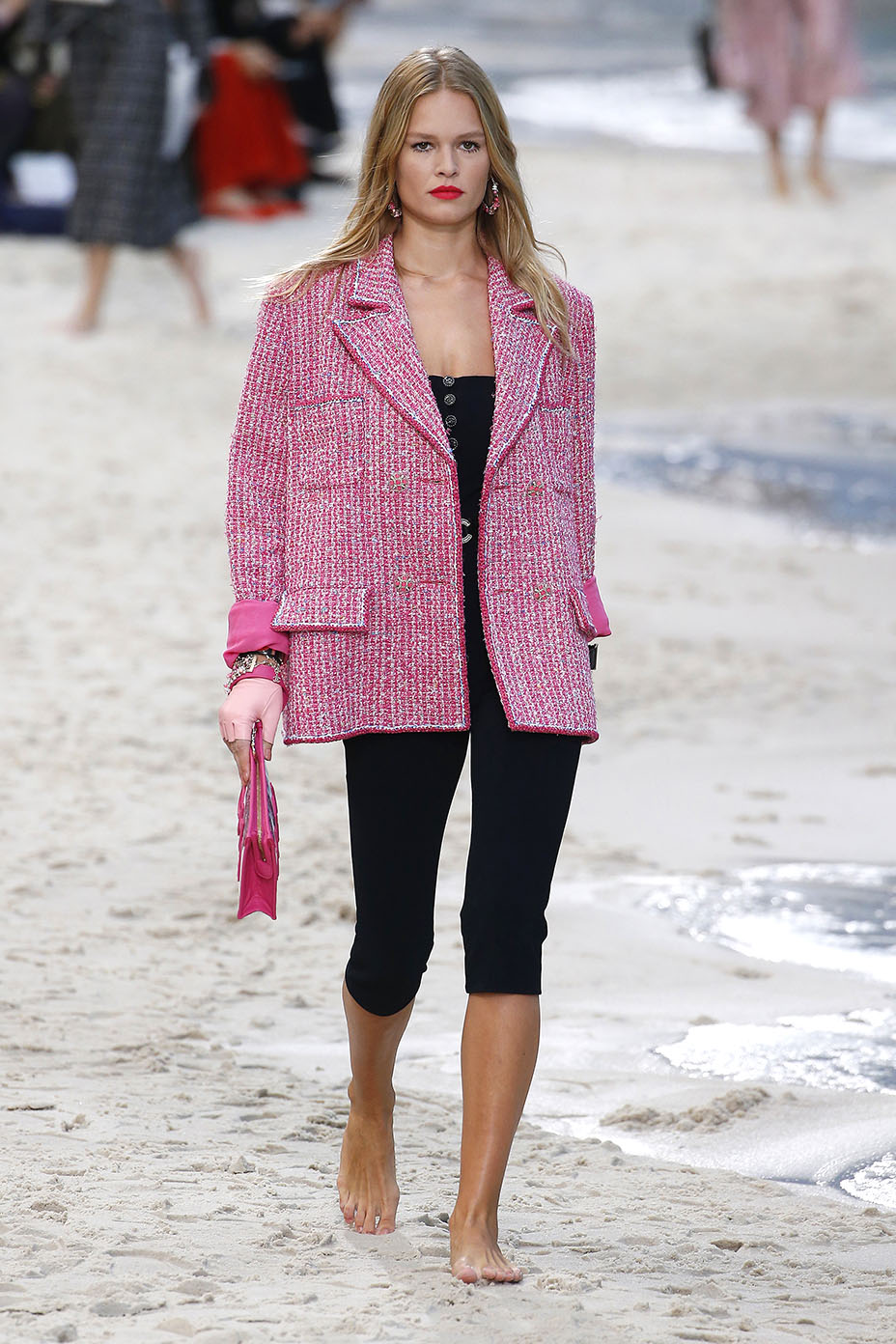 The new, relaxed Chanel suit, in sandy boucle, had a jacket with the ease of a camp shirt, worn with culottes or over a short A-line skirt with side slit, and the thoughtful detail of matching shorts underneath. 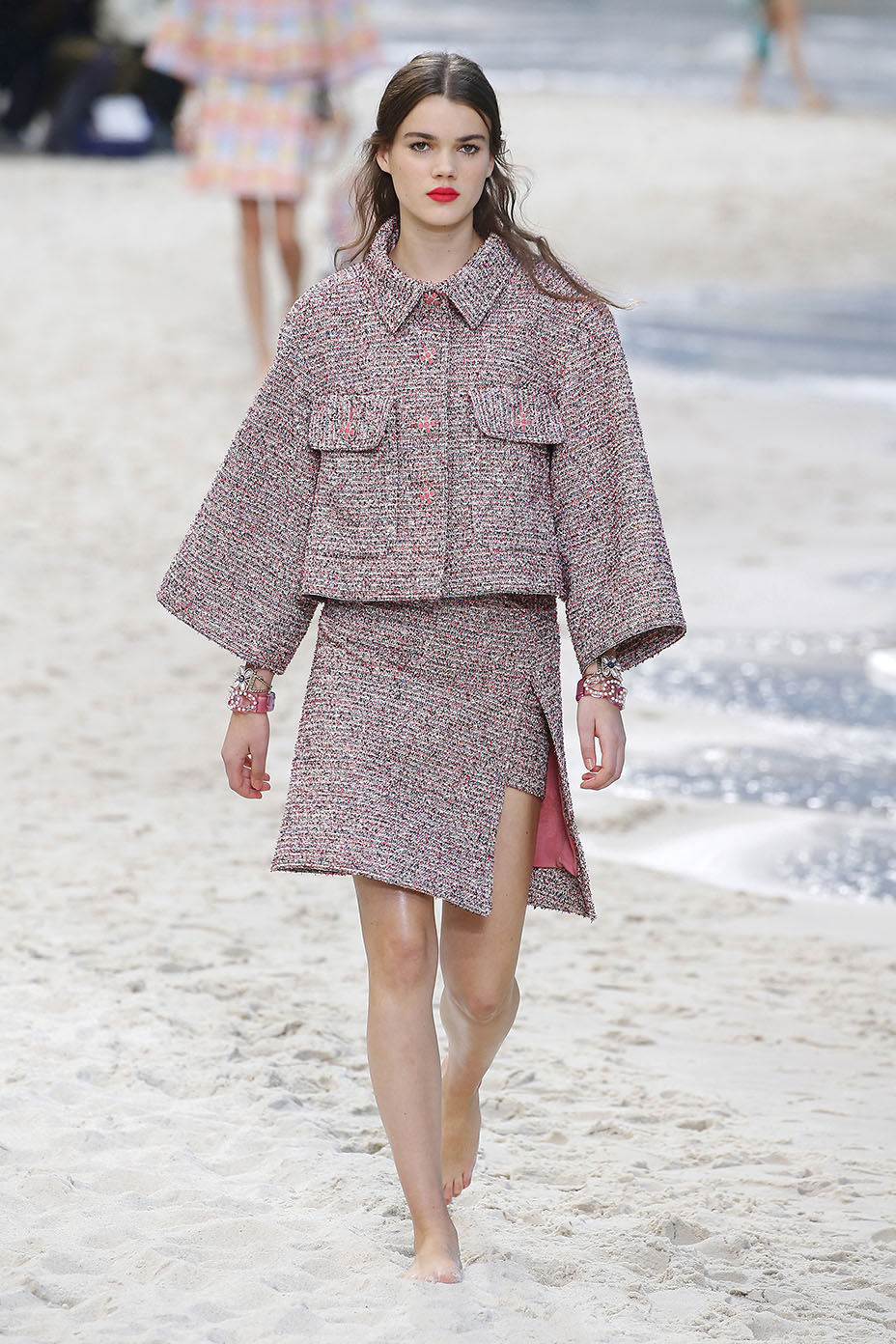 Dresses had the feel of beach cover-ups, one suspended from chain-link shoulder straps, and a casual coat came with the sleeves rolled up. Denim lace (for real, it was fabulous), beach umbrella prints and embroidery were rendered beautifully on easy-to-wear silhouettes, including jersey sundresses, a caftan and bike shorts, which seem to be this season’s liberation wear. 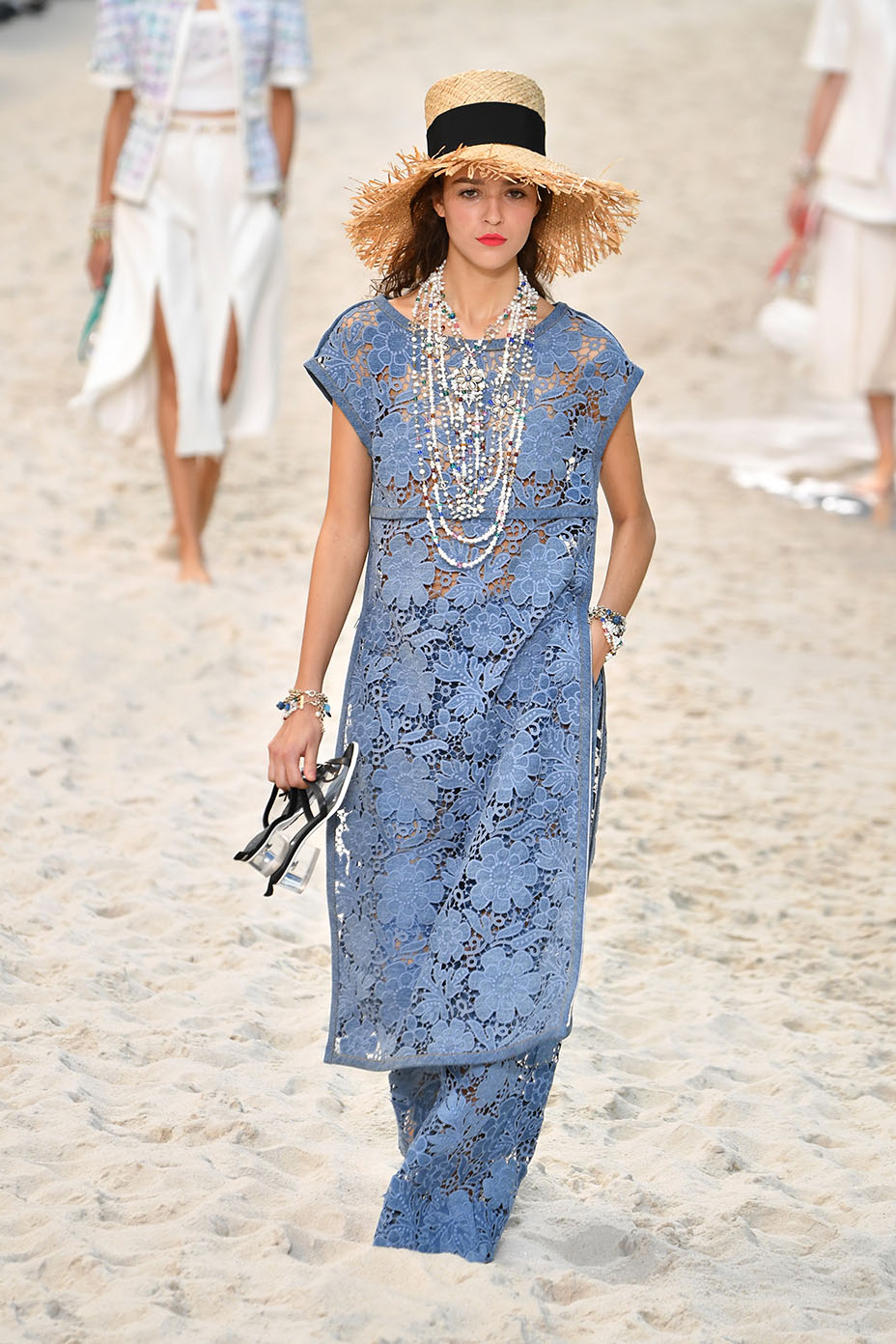 But Lagerfeld didn’t lose sight of the fact that fashion is its own kind of fun escape, either, so there were throwback 1990s rhinestone earrings and belts spelling out “CHANEL” (like mother, like daughter, Kaia Gerber was a spitting image of Cindy Crawford on the runway back in the day). 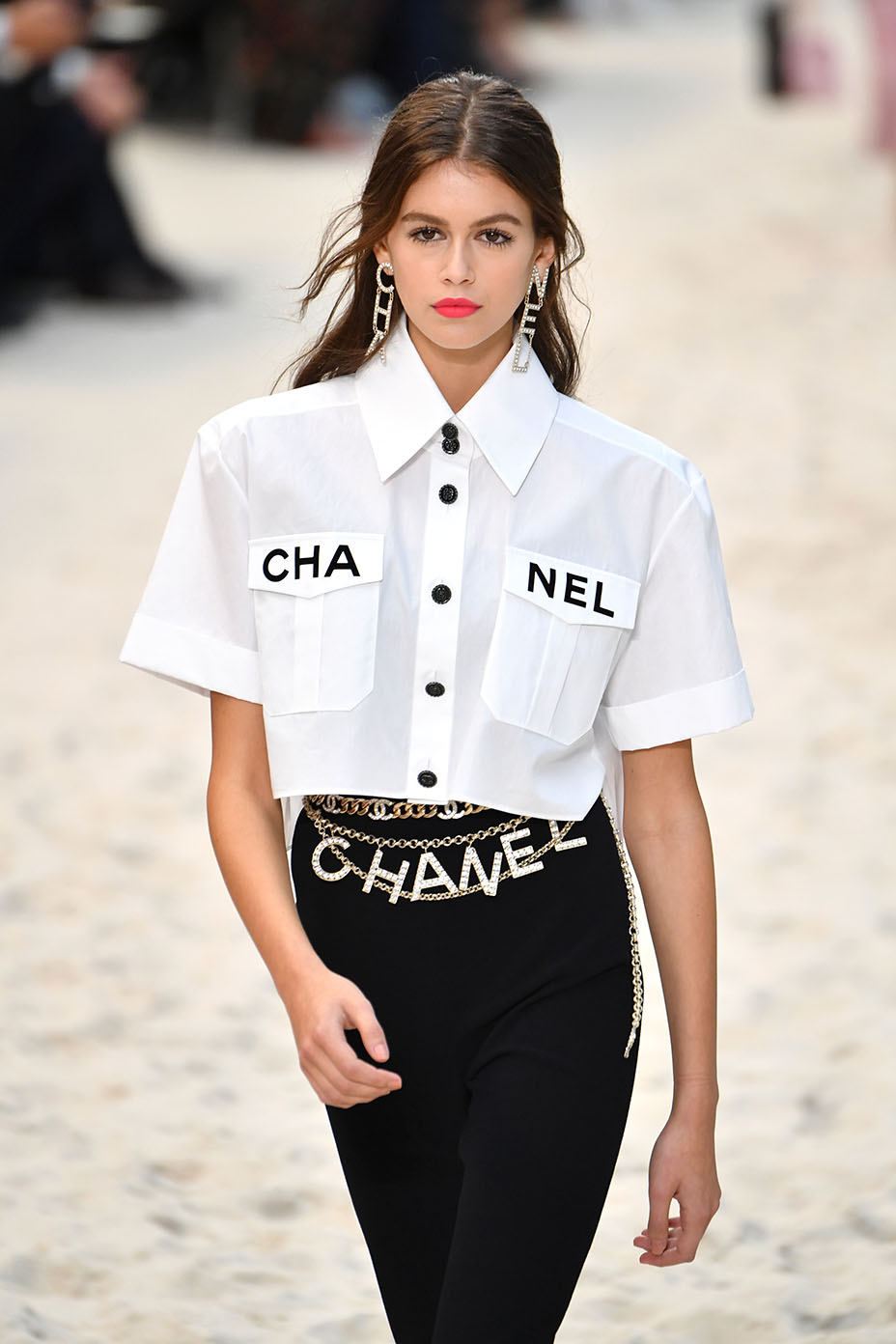 The takeaway was feel-good fashion that doesn’t try too hard. Even the evening wear (what little there was, because what woman wouldn’t rather play hooky and stay at the beach?) was effortless, a series of little black dresses that are the only thing you’d ever need. 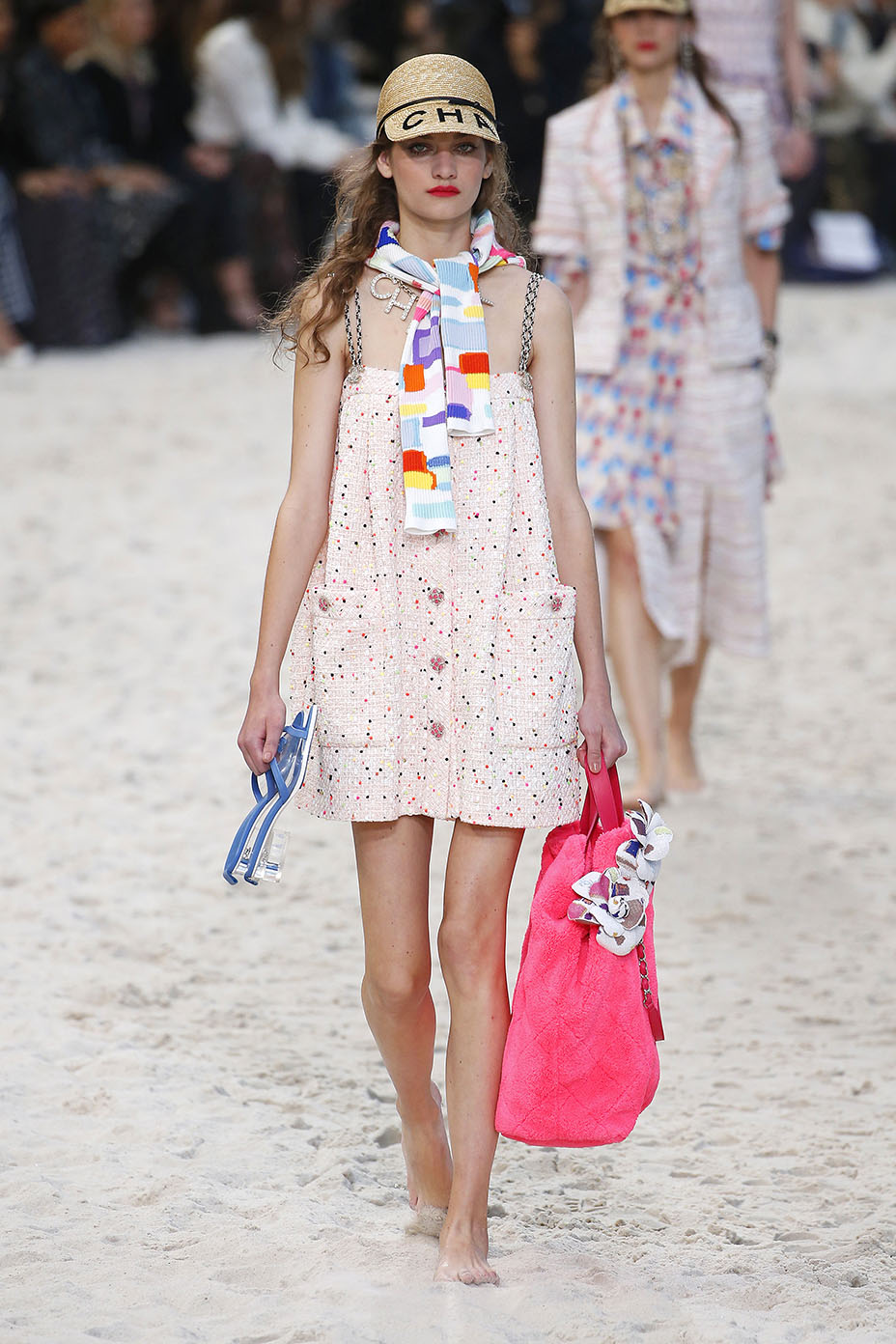 It’s Lagerfeld’s ability to tap into the female psyche that is so rare and so vital, especially in a time when #MeToo has changed the meaning of everything from popular films and songs, to runway fashion.

Thom Browne’s show was a similar seaside spectacular to Chanel’s, complete with lifeguard stations and cabanas (but no waves), showcasing couture-level craft taking inspiration from a day at the beach. But there was something unsettling, with all we’ve been through, watching a few of the models with their arms laced and bound behind their backs, even if it was supposed to be kooky. 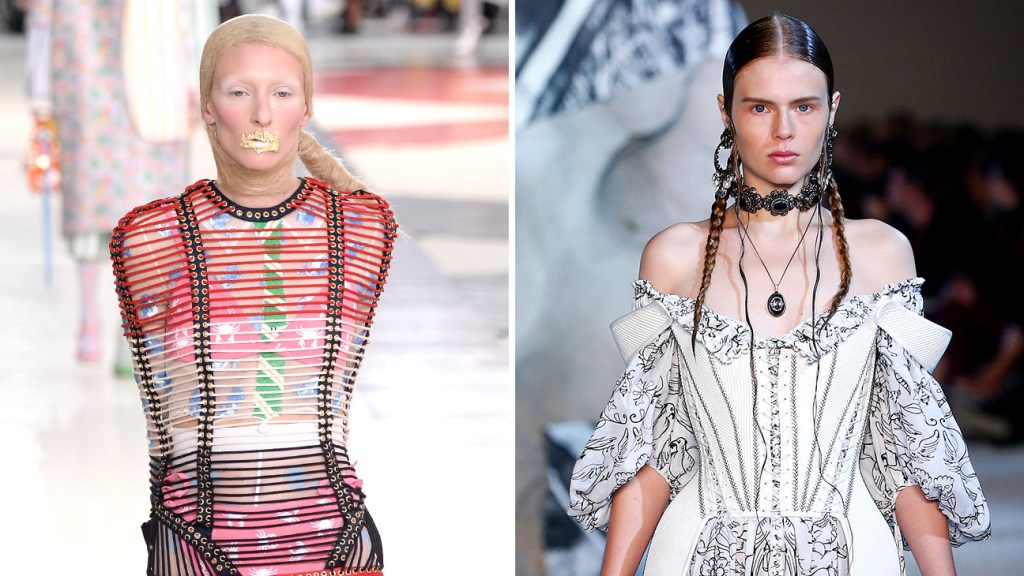 At Sarah Burton’s Alexander McQueen show, a corseted goddess gown also seemed like a relic, and the whole fairytale collection from another time when women were kept in castles and worried about trousseaus. The swashbuckling-style of the leather tailoring was meant to evoke a warrior spirit, according to the notes, but was similarly over-the-top, more like something you’d expect to watch in the latest HBO historical drama. 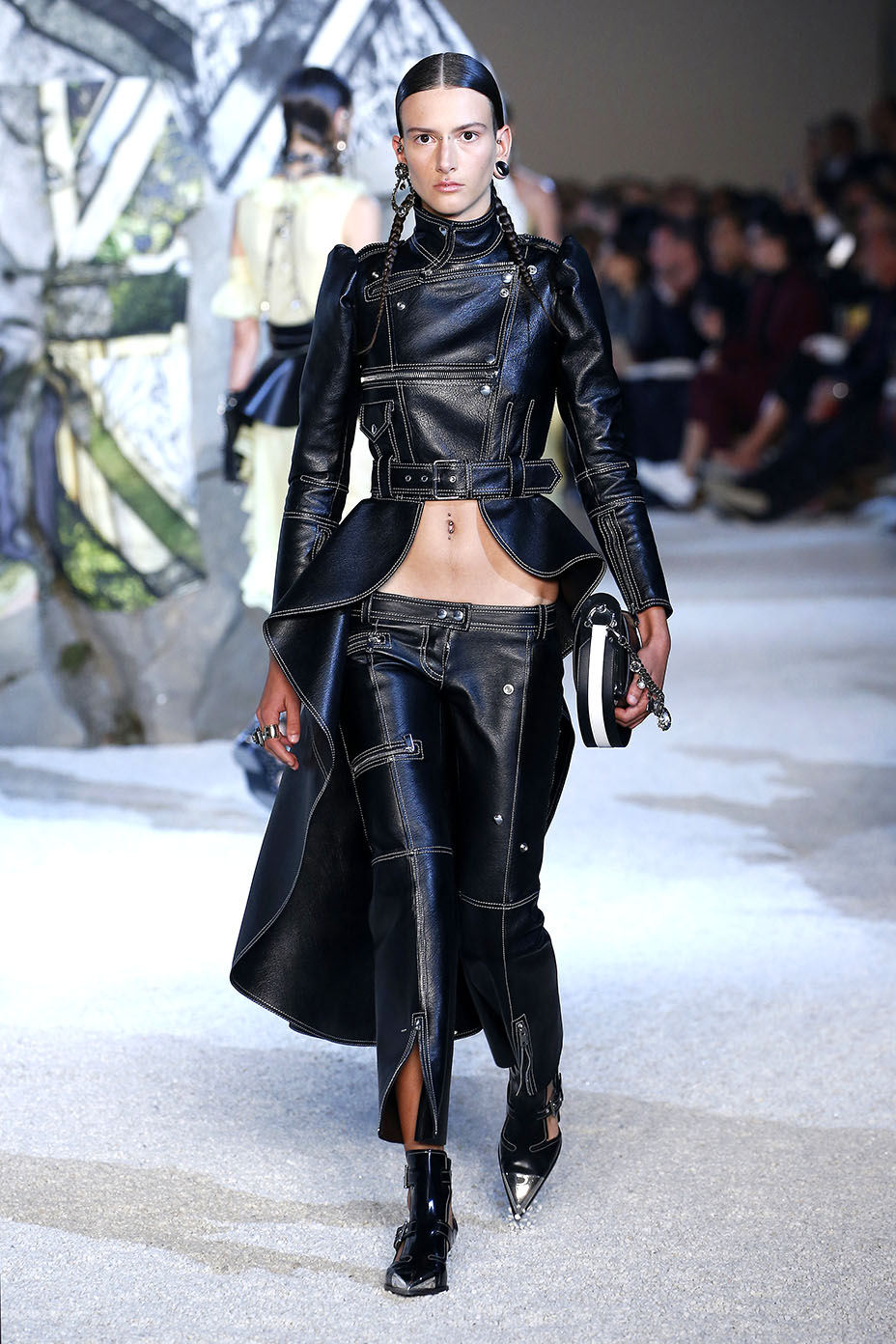 Even when a more laidback, modern attitude was the goal, as it was at Stella McCartney, the current cultural moment seems to call for a certain pragmatism and straightforwardness. 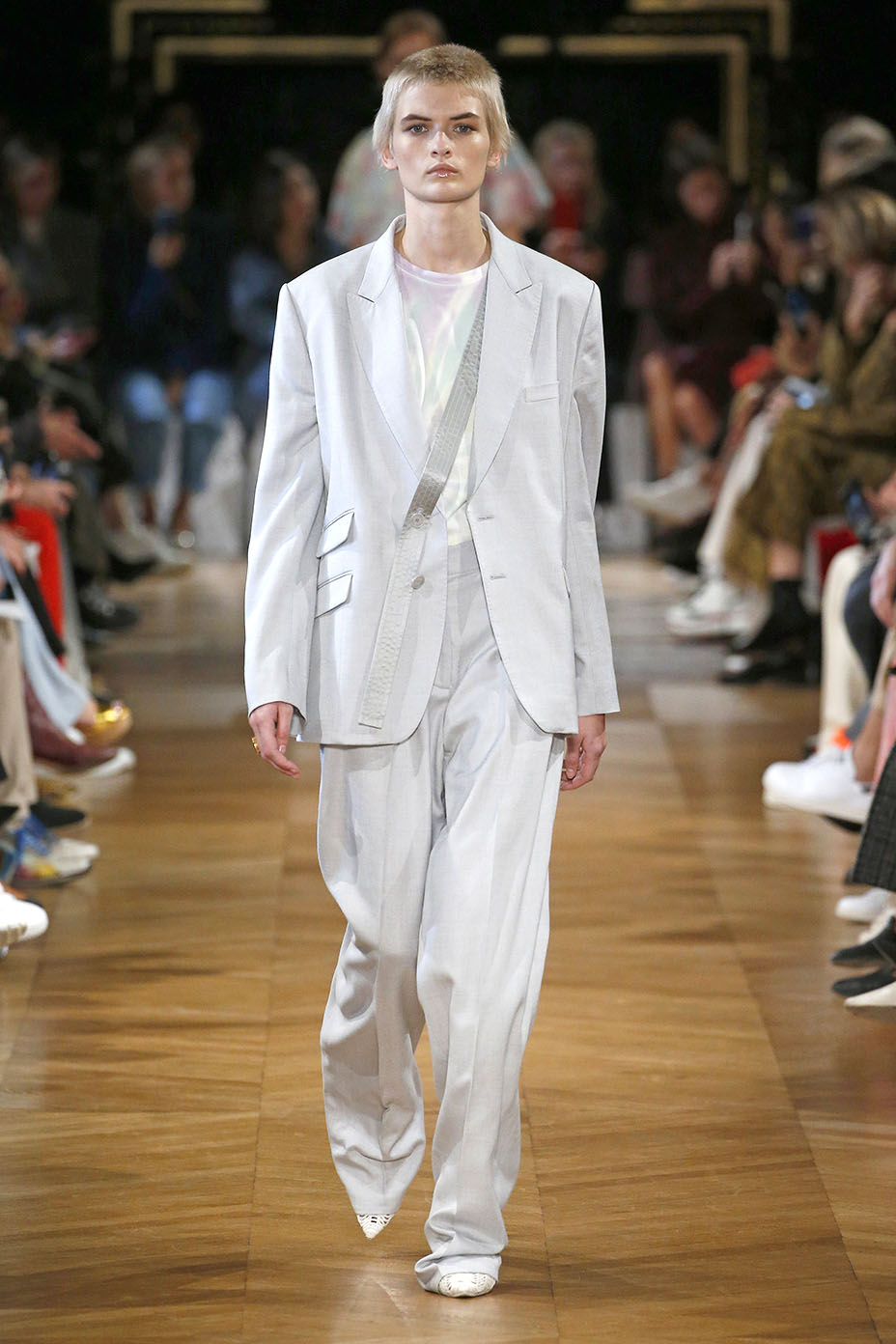 A beige linen boyfriend blazer and wide-legged trousers worn with a tie-dye T-shirt was renegade fun that would play well in a creative capital such as L.A. 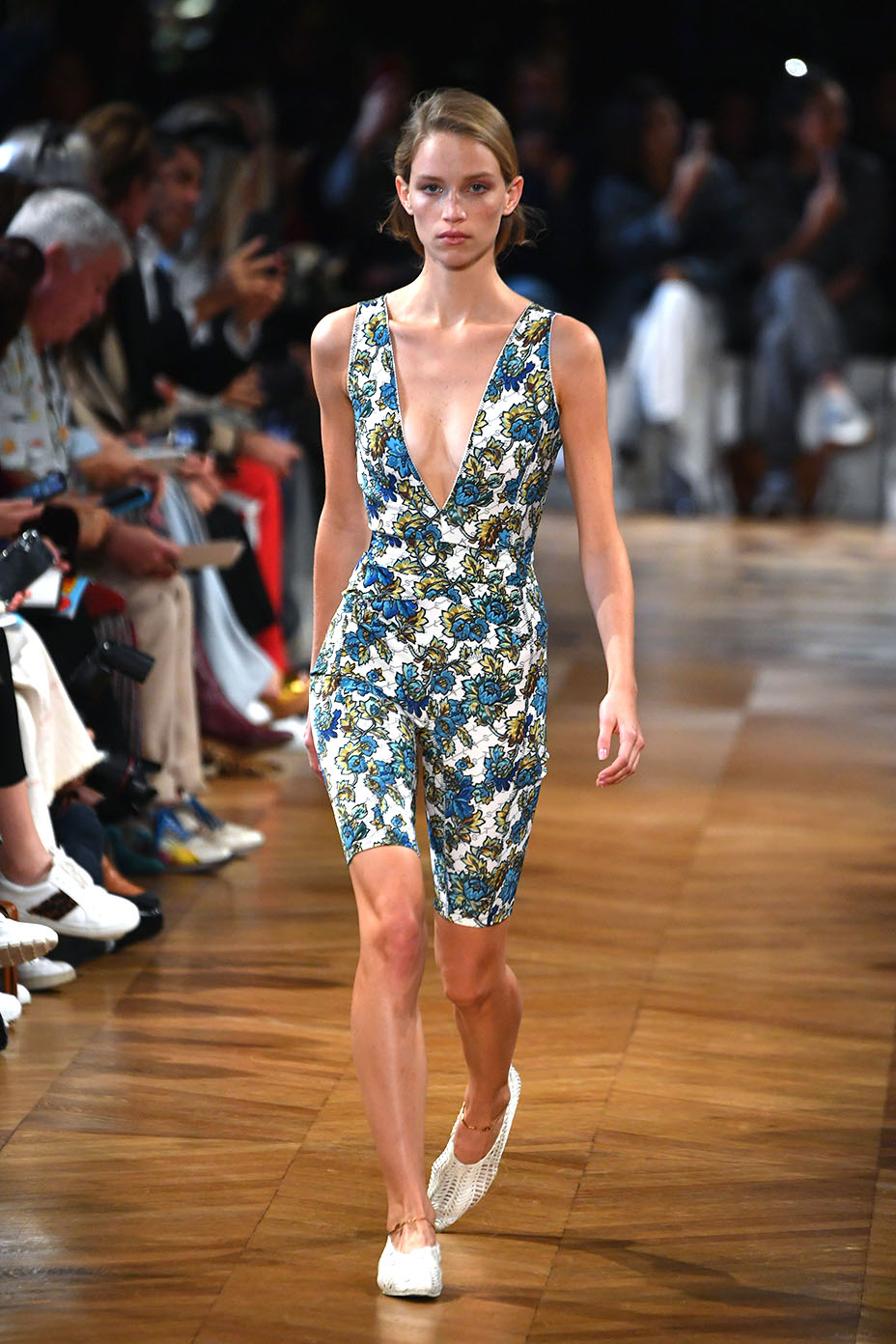 But a blue wallpaper floral unitard was not the best example of the season’s haute Lululemon trend. And a white nylon flight suit sliced with zippered openings wouldn’t be any woman’s friend. 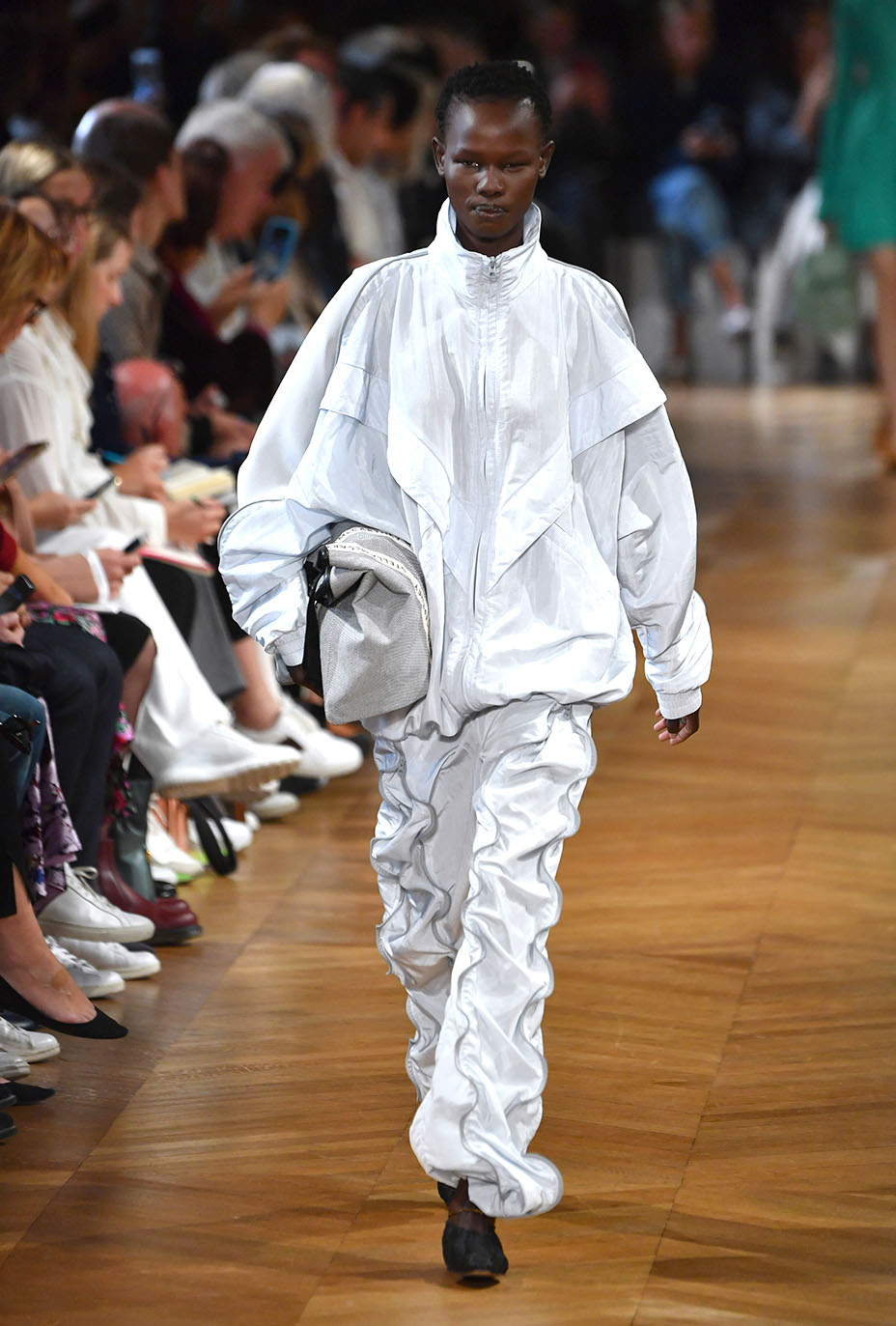