At Balmain, the future is so bright, you gotta wear a Snapchat filter. The French luxury brand launched its first “digital accessory” at its Paris Fashion Week show Friday, a filter for the social media app that doesn’t quite make you look like Balmain superfan Kim Kardashian, but does give you a fluorescent sheen similar to the clothes that came down the runway.

The move was meant to reflect “our commitment to being inclusive and accessible,” creative director Olivier Rousteing wrote in the show notes.  And it was a genius way of including the #BalmainArmy that shopped his cheap chic collection at H&M and the L’Oreal lipstick collaboration, in the rarified runway experience in an immediate way.

True to his word, there were a lot of plastic, fantastic, fluorescent looks — eye candy for social media — that should also attract pop stars like moths to a flame. Think silvery jumpsuits, iridescent cellophane-like pants with a slouchy sequin sweater on top, micro-sequin pants and a matching duster coat. But Rousteing did not neglect those seeking something slightly more understated; also on offer were high-sheen pleated ball skirts worn with a sweatshirt or striped sweater, and a parachute-panted silvery jumpsuit over a black turtleneck.

Minidresses — a mainstay of the house — were lit with electric color blocking, accented with Silly String like embroidery, or wrapped in Balmain branded ribbons. And the brand’s signature tailoring came out in boxy jackets worn with slouchy pleated trousers atop heels, or longer length blazers with the sculpted Power shoulders that are typical Balmain.

Yes, there were nods to the ‘80s — the season’s retro decade of the moment — in the color scheme, reflective effects, and some silhouettes, but it wasn’t so slavish as to be off-putting. What made this Rousteing’s best Balmain collection to date is that it wasn’t overthought, overembellished or overwrought, and there was truly something for everyone, even for those who consume luxury fashion onscreen, instead of IRL. 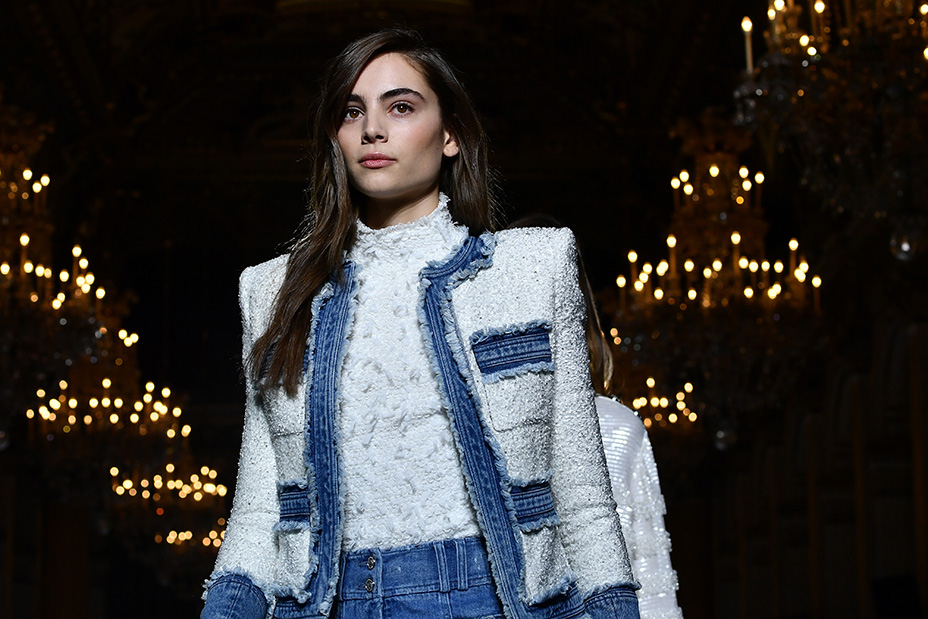