Would it be another equestrian fest like the Diorodeo couture show back in May, when Paris Jackson walked out to protest the treatment of the horses? That seemed to be the giddy-up for the Dior opener to Paris Fashion Week on Monday afternoon at the Hippodrome Paris Longchamp.

But we were in for something far gentler in the leafy 16th arrondisement, as it turned out: apres danse! Dior creative director Maria Grazia Chiuri’s Spring 2019 answer to the aspirational lifestyles of apres surf and apres ski.

If there is anything Chiuri has shown us in two-plus years on the job, it’s that she takes her role as the first female to lead the French house of Dior very seriously, and as such, she is intent on finding ways to square fashion with feminism. At times, she’s done so overtly, with feminist T-shirts and a ’60s-era mock protest march on the runway. But this season, she reached for something deeper: the freedom of movement inspired by such heroines of modern dance as Isadora Duncan and Martha Graham. 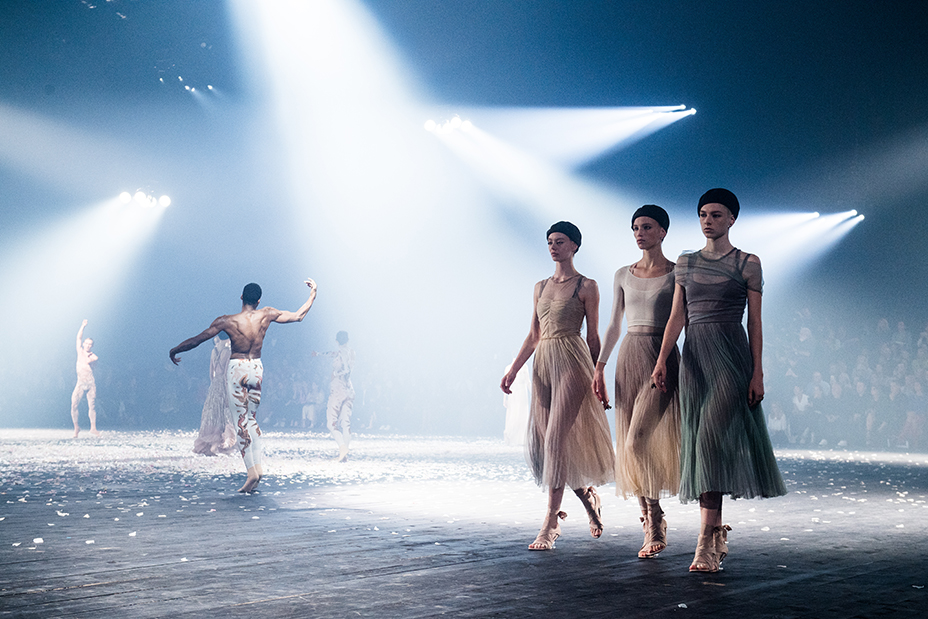 She made use of the open space under the tent in the middle of the racetrack to stage a moment of grace, tapping Israeli choreographer Sharon Eyal to direct a troupe of spotlighted lithe, leotard-clad dancers who bent, stretched, flexed and pointed as a shower of rose petals gently fell.

But when the runway looks started coming out, they almost felt too gentle. Chiuri used sheer bodysuits, tanks and mesh leggings as underpinnings for muted versions of the house’s now-familiar tulle tutus, military-looking jackets and belted blazers, adding ballet shoes or ribbon-tied pumps with transparent heels to stay on point with the theme.

A gown with a colorful twirling skirt was a joyful interlude, as were tie-dye denim pieces. But the overall impression of nudes, neutral kaleidoscope prints, and filmy layers didn’t stimulate the imagination as much as the dancers. 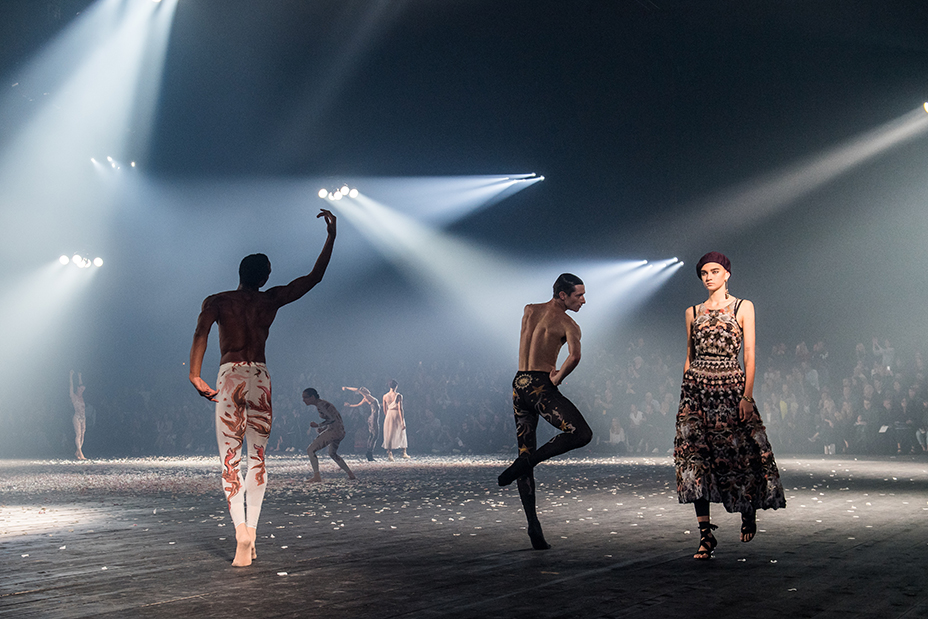 Alessandro Michele, on the other hand, is someone for whom creativity doesn’t just flow, it gushes. The Gucci designer brought his vision from Milan to Paris for the season, staging his Spring 2019 extravaganza at Le Palace, which first opened in 1912 as a movie hall, then rose to prominence as a nightclub in the 1970s and ’80s — a kind of Studio 54 on the Seine.

It was the perfect setting for Michele’s new seasonal cast of characters, clad in individual looks that invariably left you surprised, delighted and bewildered. 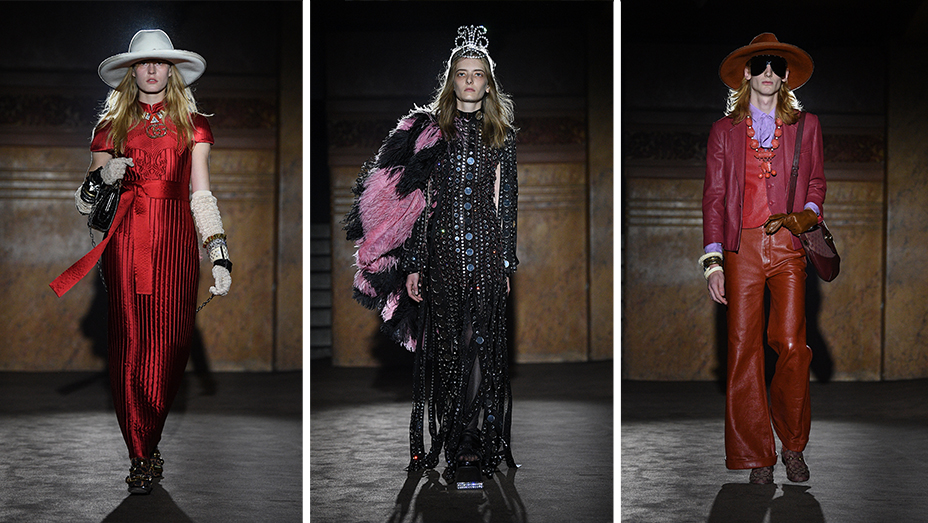 Guests packed velvet theater seats, opera glasses in hand, while VIPs like Jared Leto, Faye Dunaway and Salma Hayek Pinault sat in the balcony. The collection was inspired, according to show notes, by Italian experimental theater, and per usual with Michele’s Gucci shows, you didn’t know if it was all a put-on or dead serious.

After a surrealist short film opened the show, models began emerging from the back of the theater wearing one out-there costume after another — black leather bondage gear over pants; something resembling a floral dentist smock over a plaid shirt and Dad khakis; a Donna Summer disco fringe dress; a woman with a bird on her shoulder; a man carrying a Mickey Mouse head-shaped purse; flared pants, hot pants, no pants, only Gucci logo underwear briefs instead — this place had everything, in the words of Bill Hader’s Stefon on SNL!

Then, kid you not, Jane Birkin stood up from one of the theater seats and serenaded the audience. 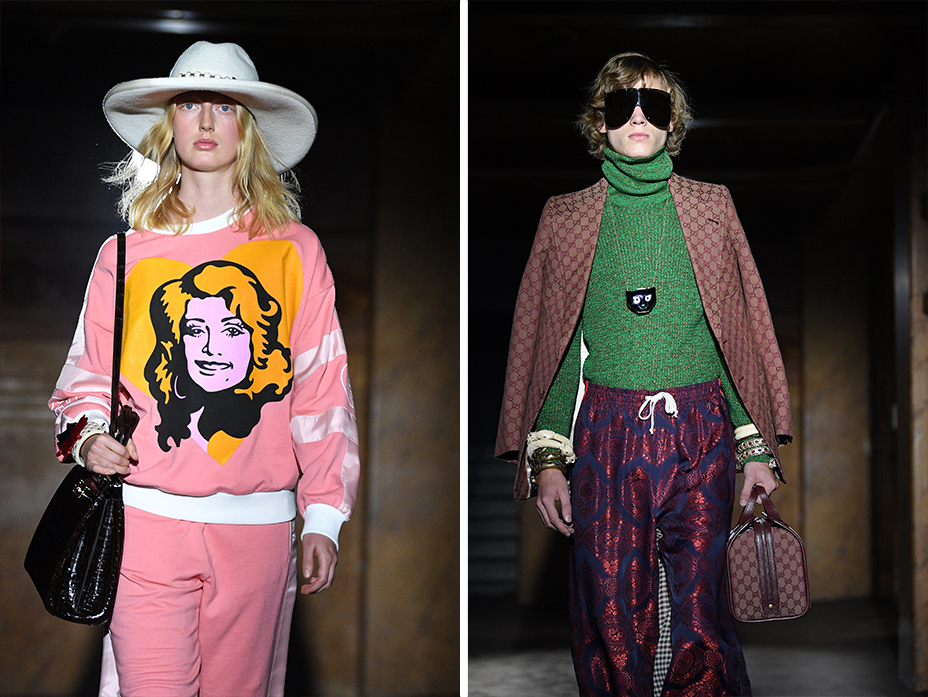 With the eyes darting from matronly loafers to a Gucci logo version of a backpacker’s pack, from a Nudie-inspired embroidered and fringed jacket, to a superbly tailored Prince of Wales suit with ’70s flares, not knowing which models were men in women’s clothes or women in men’s, the overarching takeaway of inclusivity seemed particularly timely.

Who is Michele to say what’s cool, experimental or not? Who is anyone to say when we’re all dancing in the dark? Fashion is what you make of it, and if you want to spend a couple Gs on Gucci GGs to help you get there, all the better. 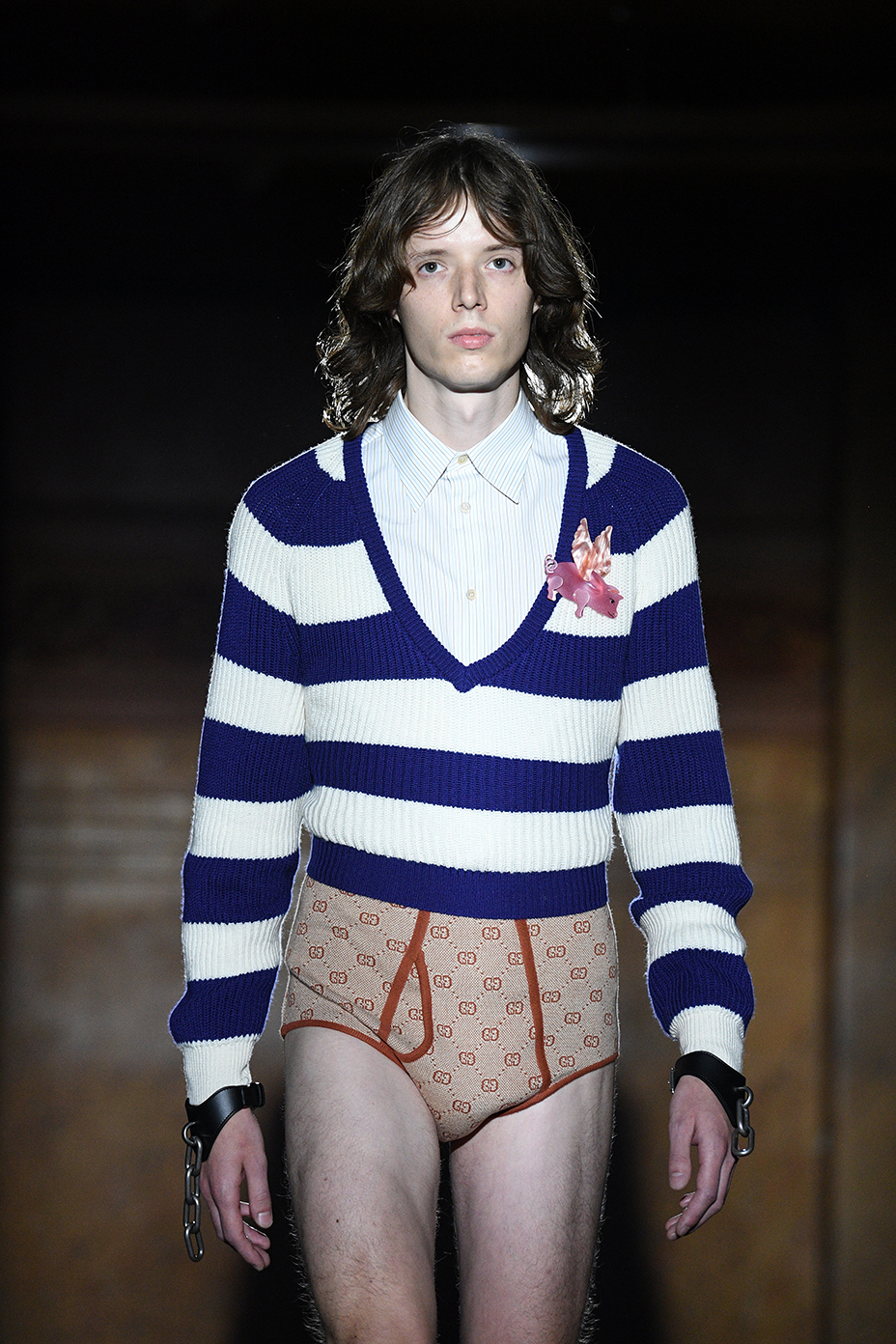 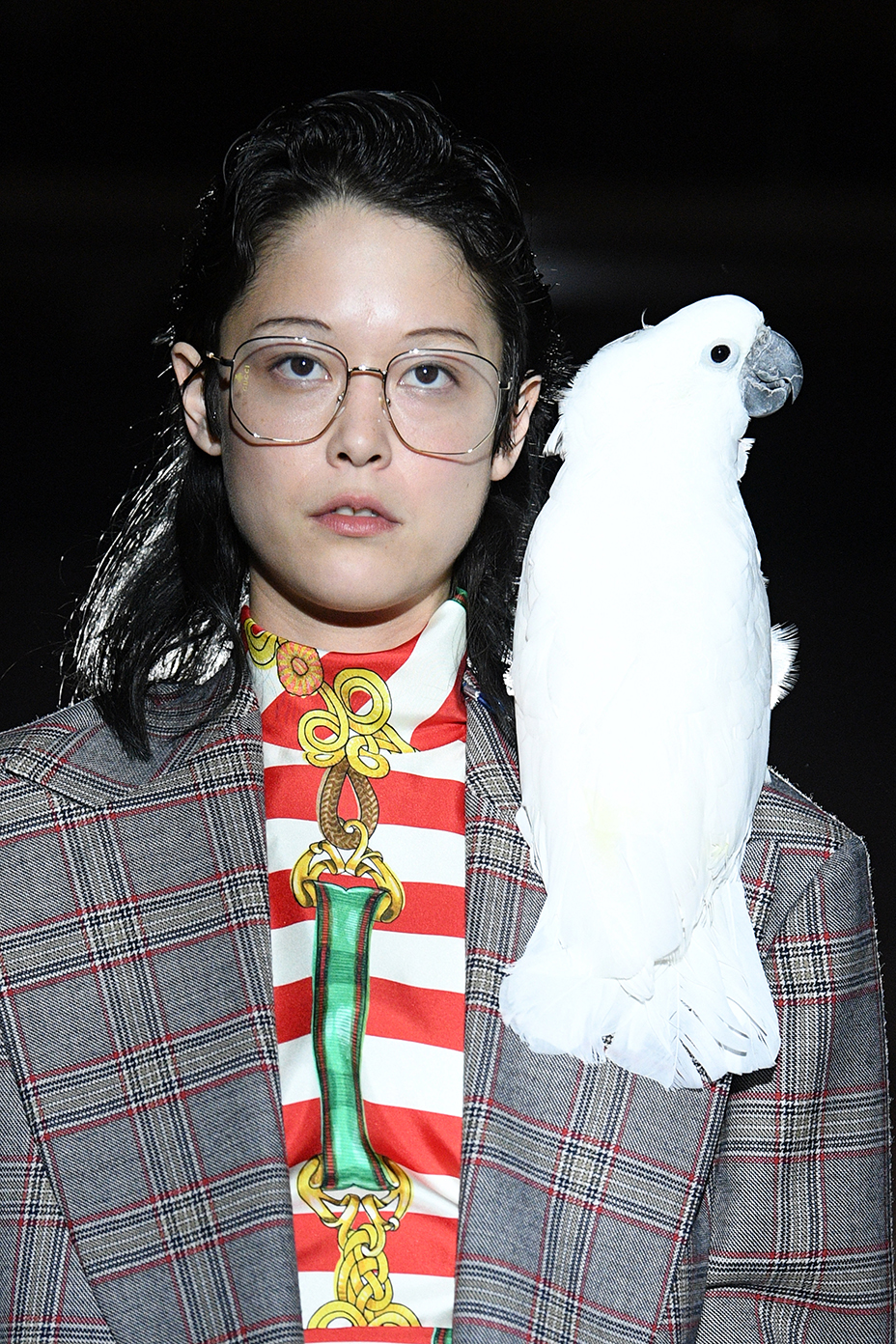 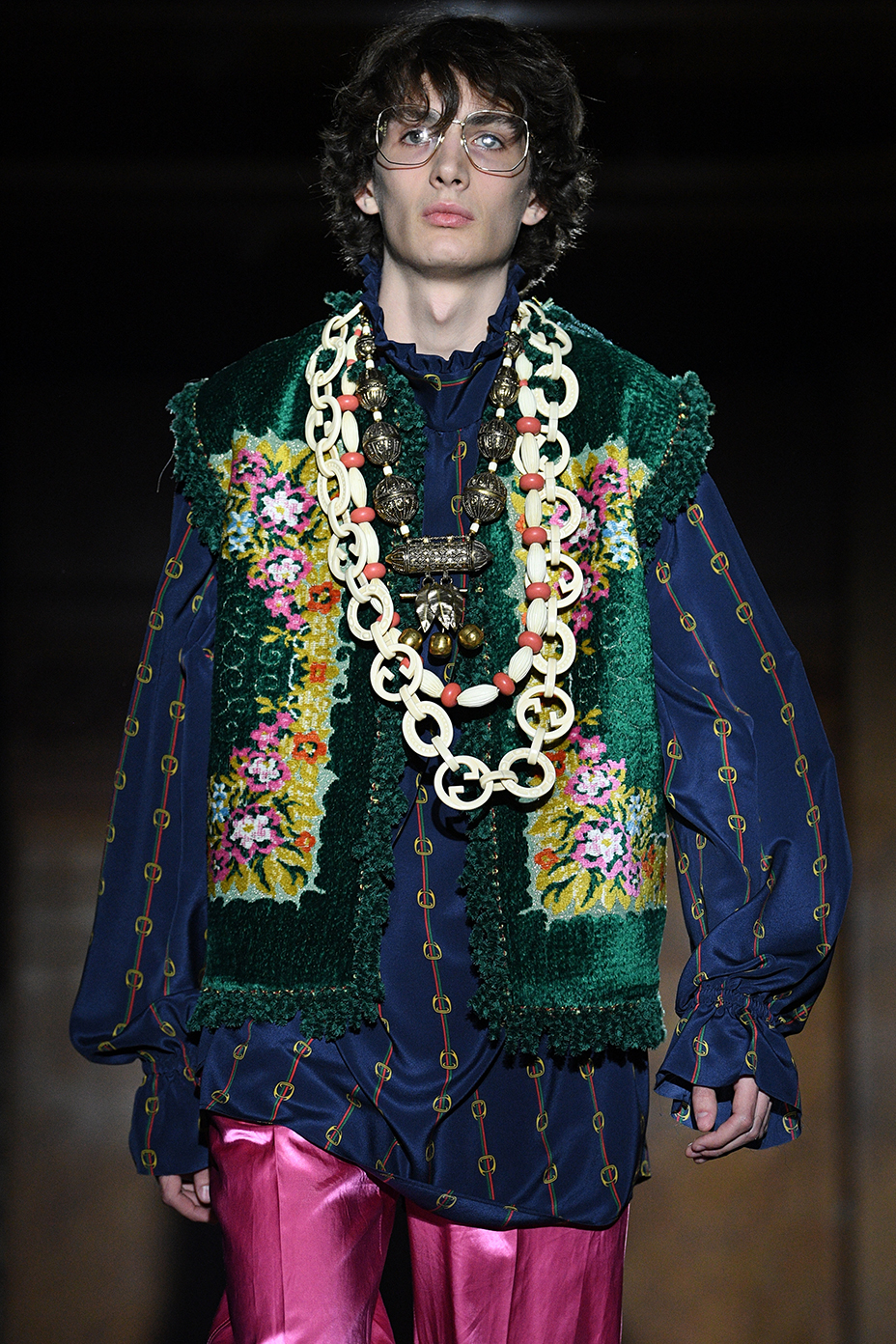