“Like all wise people, he does nothing with gender. He just dresses people, so there is no need to even discuss it,” said Tilda Swinton backstage Saturday afternoon, after her go-to designer Haider Ackermann presented his spectacular spring 2019 collection, putting men and women together on the runway for the first time.

This iteration of fashion month, which wraps up in Paris on Tuesday, has seen many designers breaking away from the binary, inspired by the cultural discussion of gender identity to show men’s and women’s clothing on the runway together, cast trans models and launch entire unisex collections.

For some, it has been perfectly authentic (since starting his label in 2001, Ackermann has been an originator of the feminized menswear trend); and for others, it has seemed more like a marketing decision.

At Hermes, the show notes at the haute saddle-and-handbag-maker-turned-ready-to-wear brand, posed this question: “What if Corto Maltese had been a woman, Lord Jim a Lady, Penelope and man and Odysseus his wife?” Apparently, an apron would be a dress, and a sailor’s smock would be a parka, or something like that. 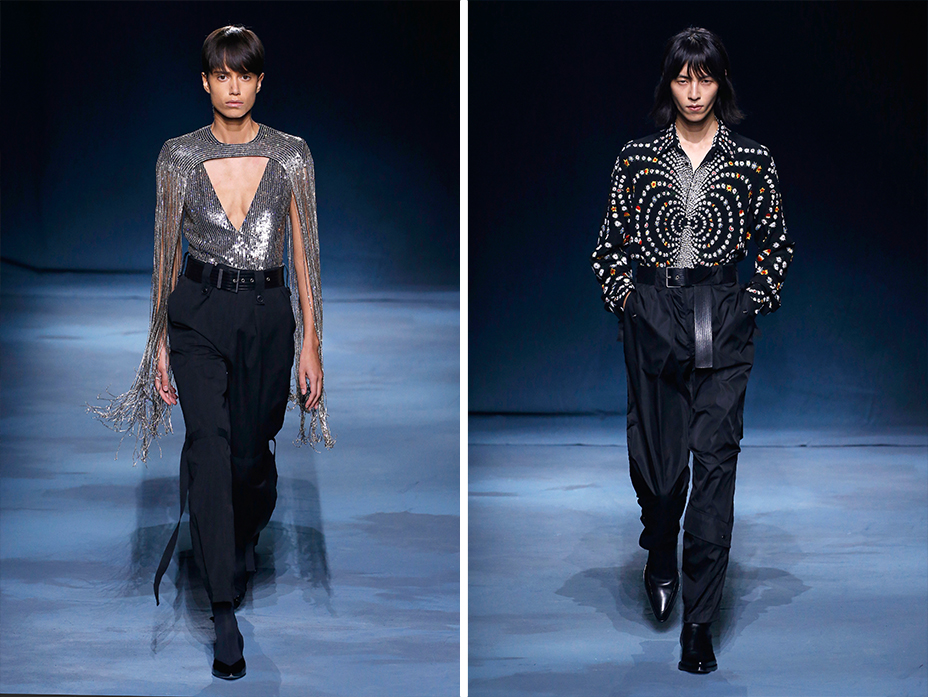 At Givenchy, Meghan Markle’s wedding gown designer Clare Waight Keller took cues from 1930s gender-bending writer and adventurer Annemarie Schwarzenbach to mix crystal fringe and cargo pants, sharp pleats with fluid dresses and sculpted shoulders with flower prints. “It seemed to make sense for right now,” she said. Whether it made sense for what was on its way to becoming a modern-day princess brand is another question. 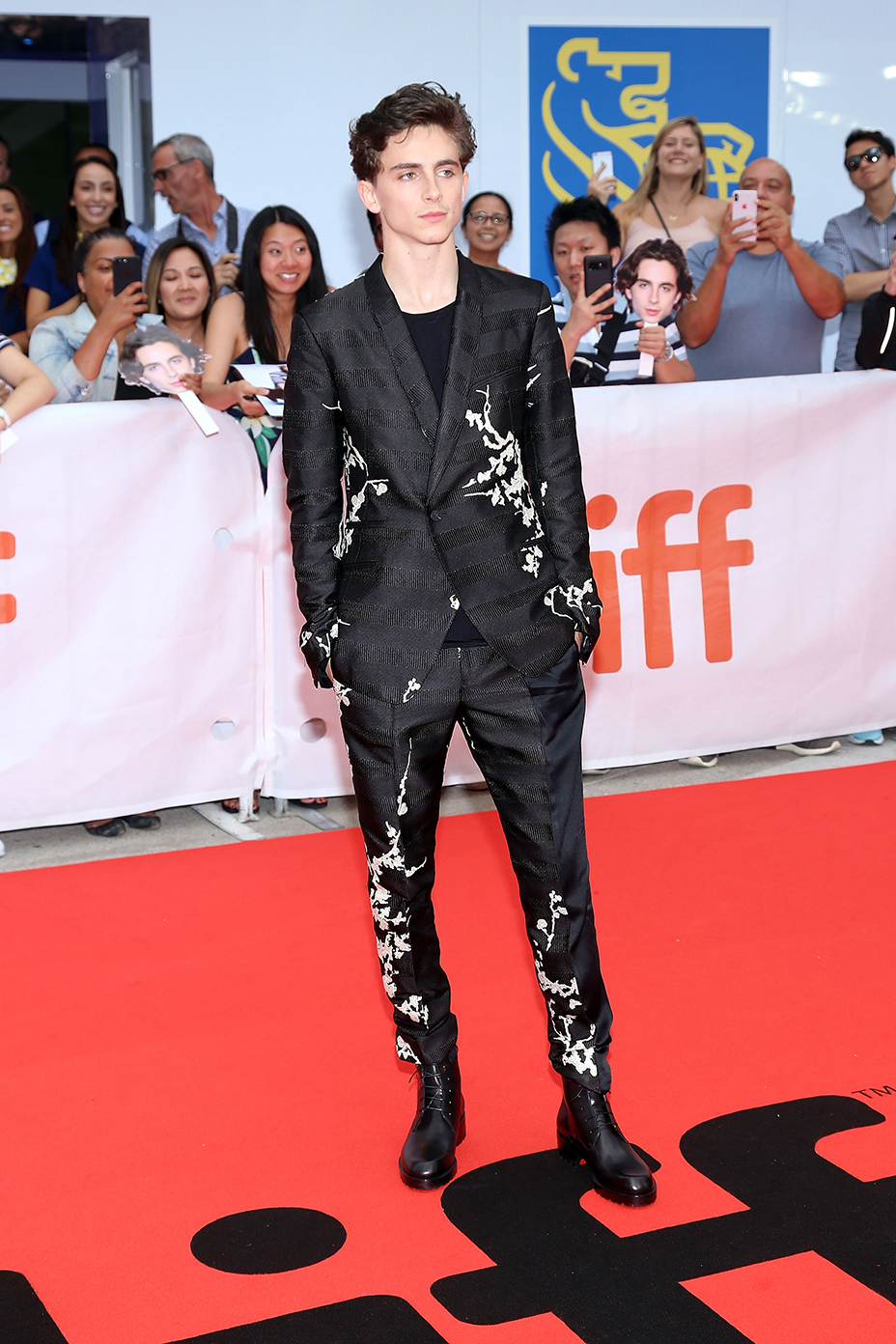 Ackermann, on the other hand, whose star has been on the rise in Hollywood thanks to both Swinton and Timothee Chalamet wearing his clothing for recent high-profile red-carpet appearances, incorporated the theme seamlessly into his staging and collection. He showed his signature exotic tailoring to dramatic effect, with models coming onto the runway in a cloud of smoke that blurred their gender identities into a romantic haze of ‘what does it matter?’ 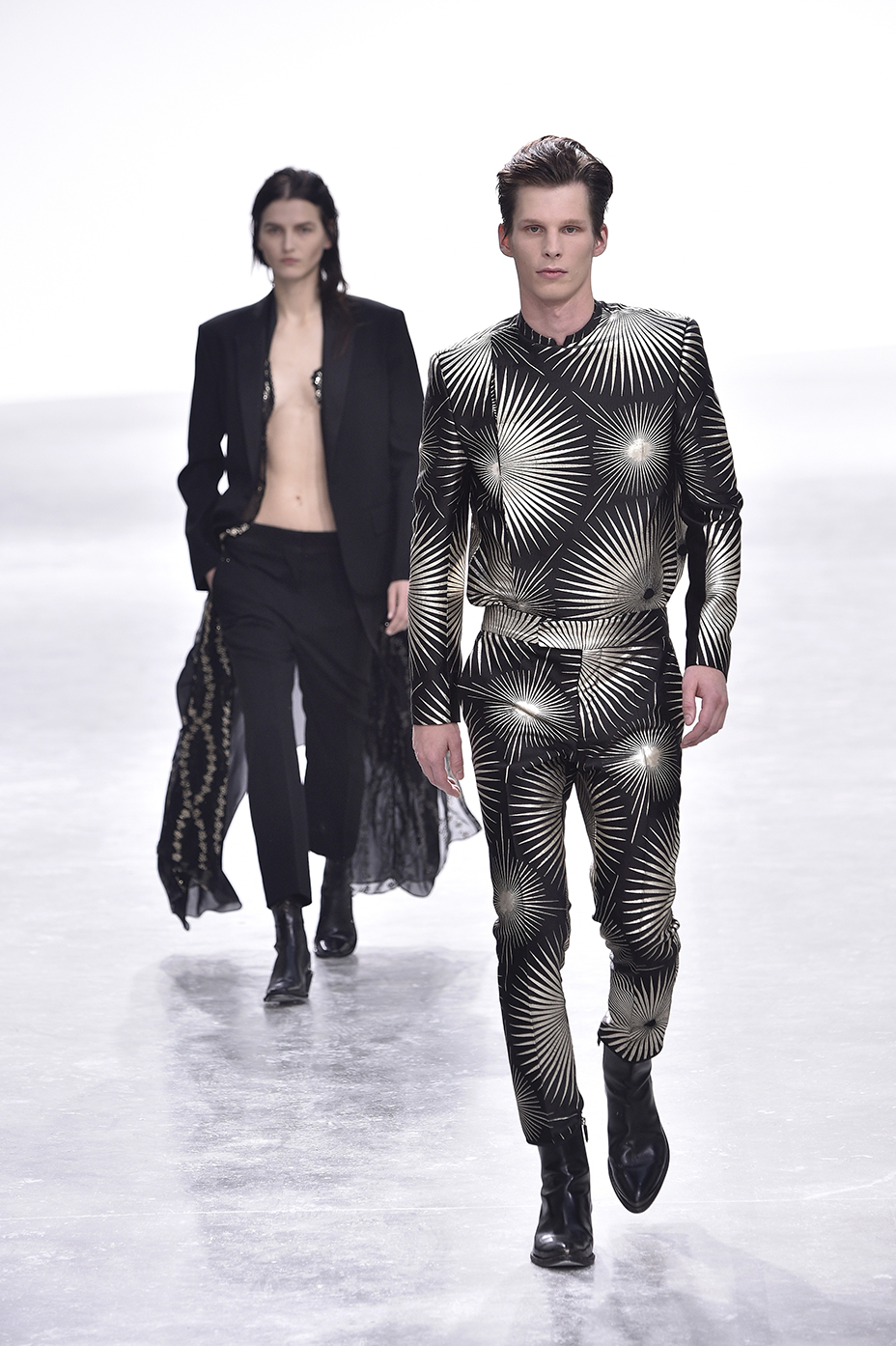 The pieces in the collection could easily have been shared and worn by anyone, the connecting thread being color and fabric. 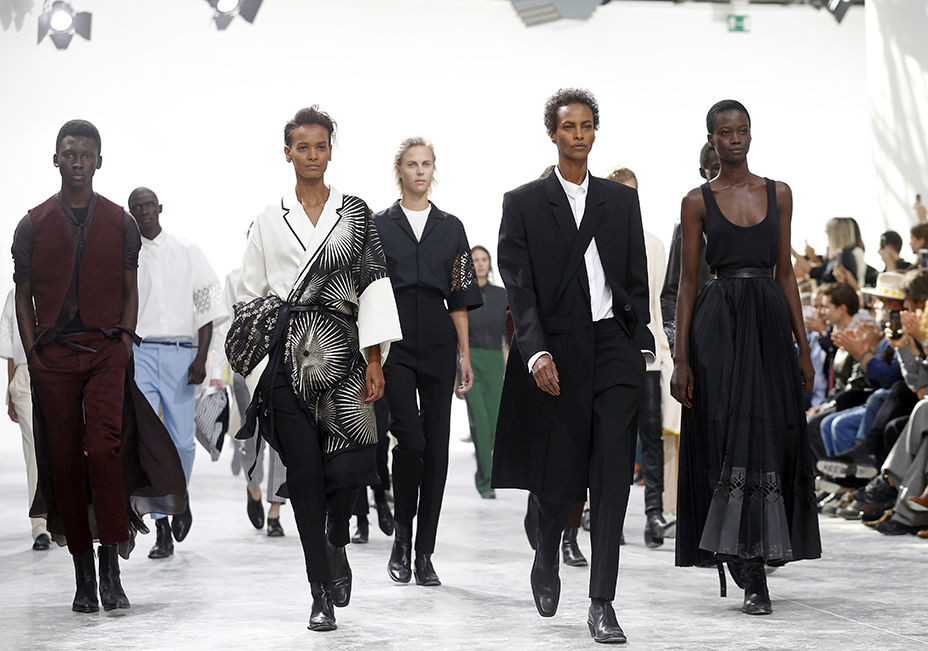 There was black-and-silver starburst brocade as a kimono robe worn by Lena Kebede and as a band collar jacket and matching pants on another model, for example; chartreuse pants and a mustard-yellow blazer, or a chartreuse suit with cropped trousers and double breasted jacket; fluid cream trousers and long silk robe with black piping detail (a softer version of a suit) or the same trousers with a crisp cropped cotton jacket with tile like embroidery on the sleeves. It made the point beautifully without hitting you over the head with it, and earned a standing ovation led by Ms. Swinton. 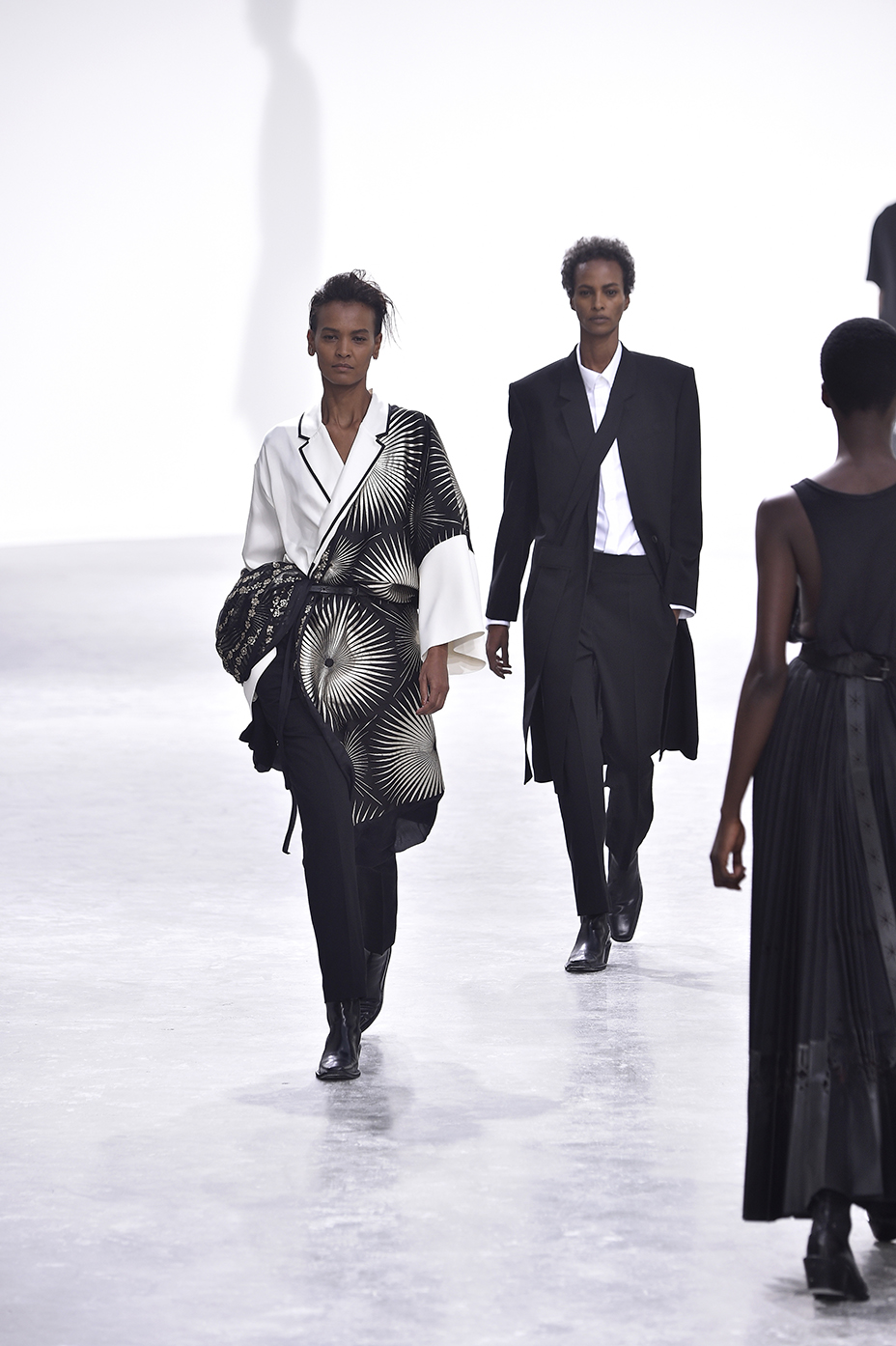 Japanese designer Junya Watanabe is also someone for whom the masculine-meets-feminine is core. His spring collection started with the familiar strains of the Queen song “Somebody to Love.” Add to that, electric-hued close-cropped wigs, studded jewelry and tattoo-patterned bodysuits, and it was clear that gender-bending rebel hearts like Freddie Mercury (soon to be played on the big screen by Rami Malek in Bohemian Rhapsody), provided some inspiration. 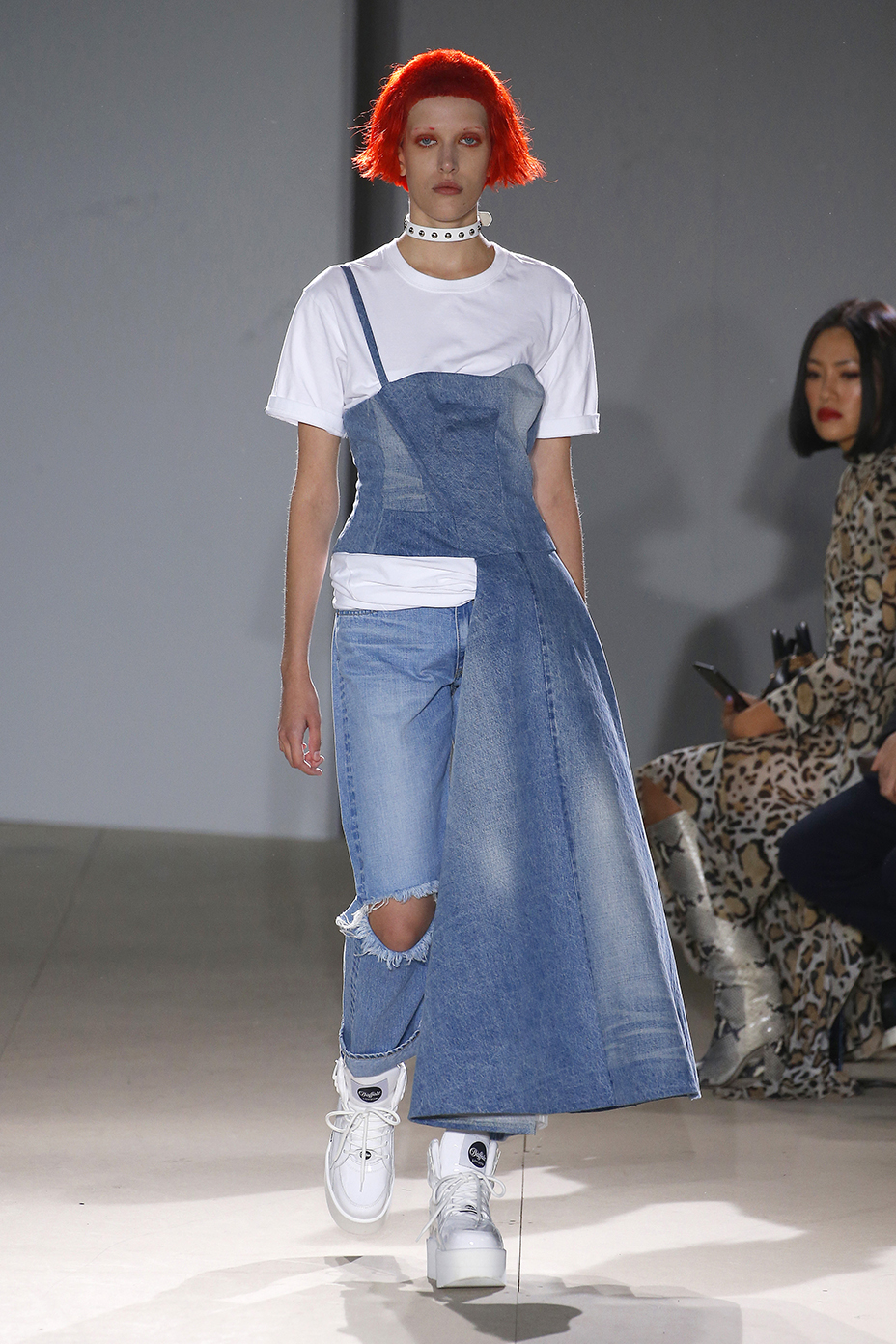 The beauty of Watanabe’s take though was that there was a fluidity to the clothing itself, as in you couldn’t tell what it was exactly until the model spun around, slowly revealing the many sides (read into that what you will). 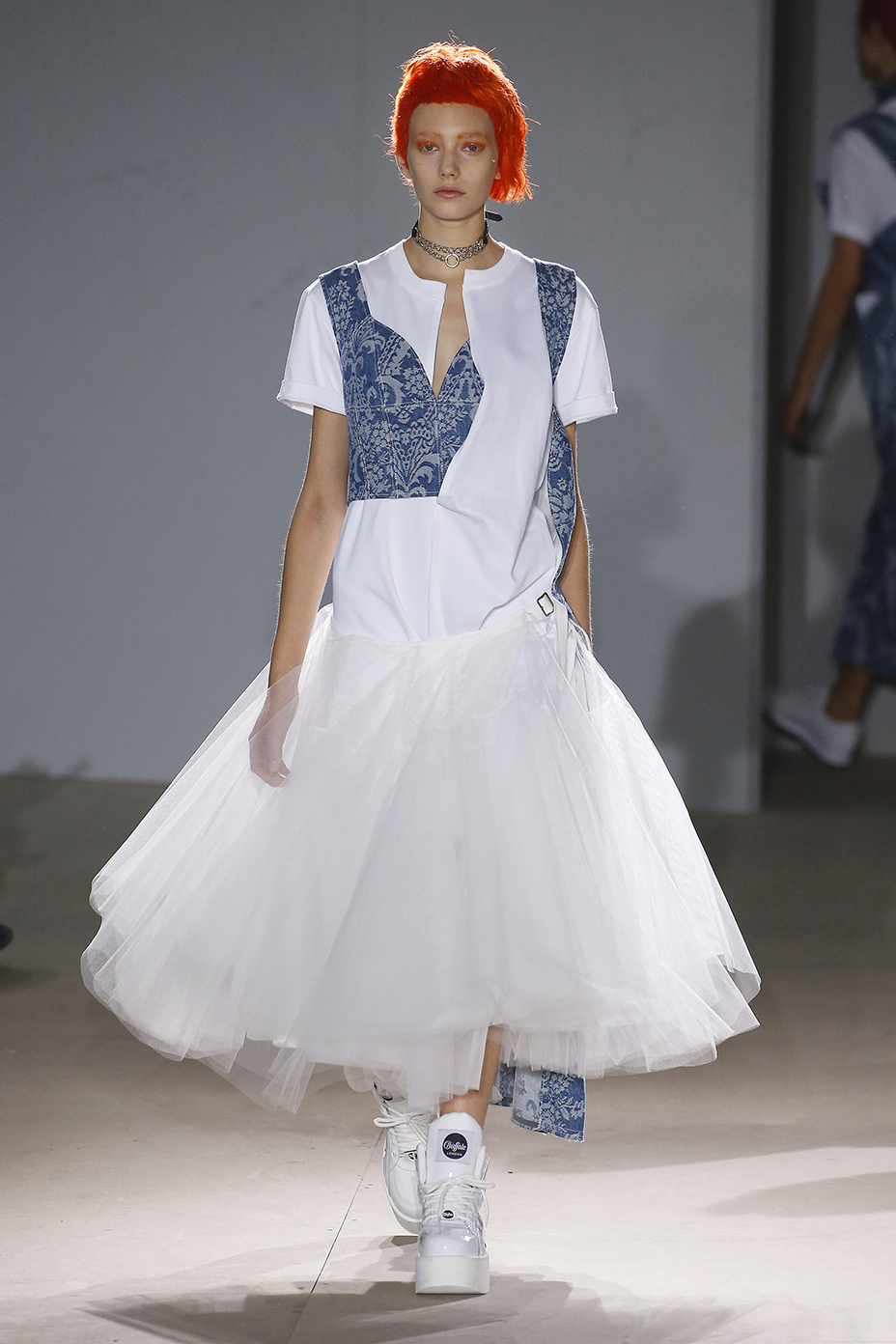 The clothes were fusions of white tulle tutus and blue jeans; marine-stripe sailor shirts and bow-front lady dresses; pinafores and prom dresses, bringing to mind prevailing gender codes and how they are constructed in large part through clothing, starting at a young age. 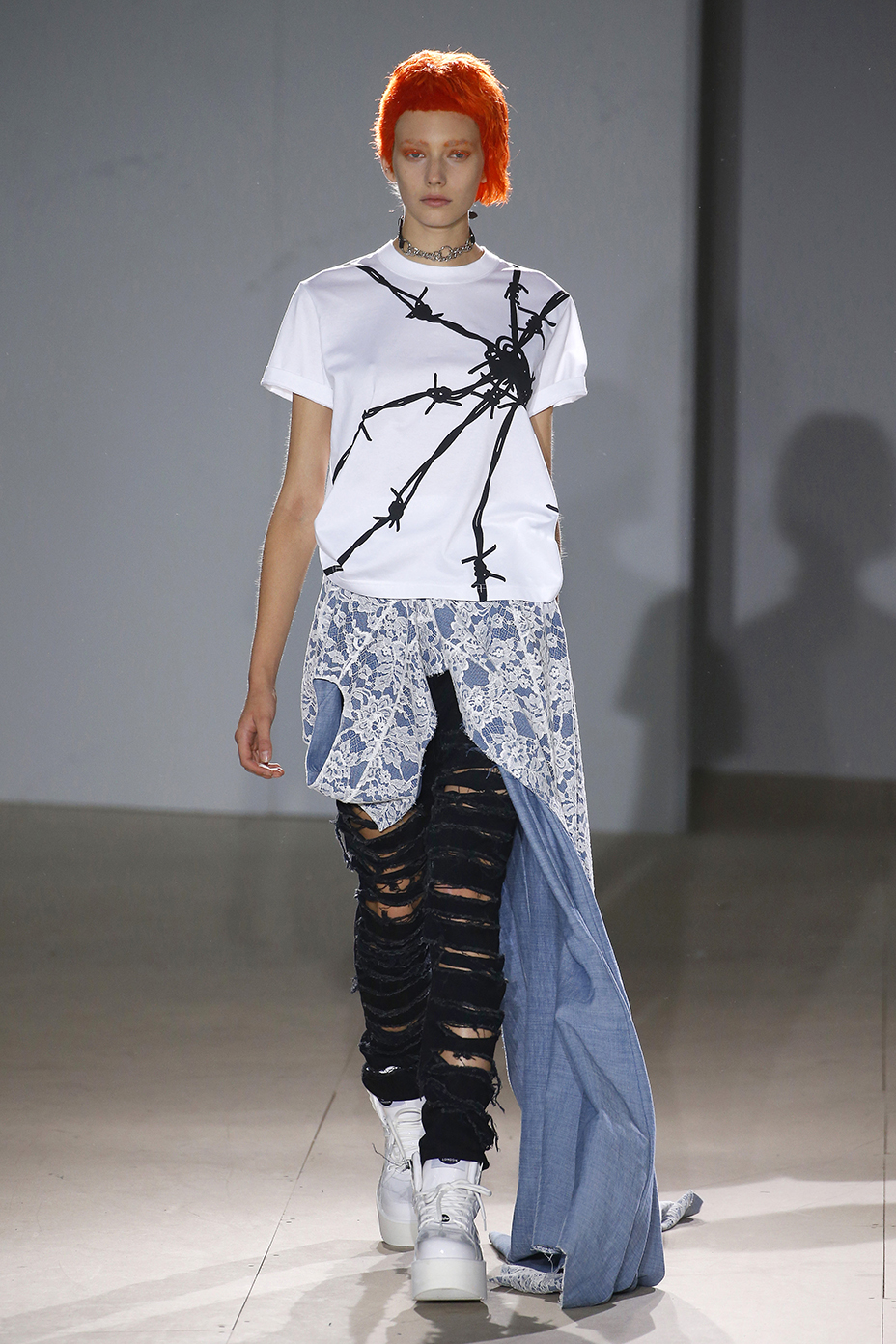 At Comme des Garcons, designer Rei Kawakubo (who will open her newest Dover Street Market store in downtown Los Angeles in November), also meditated on gender, specifically the female experience as it relates to age, the physical body and body image. 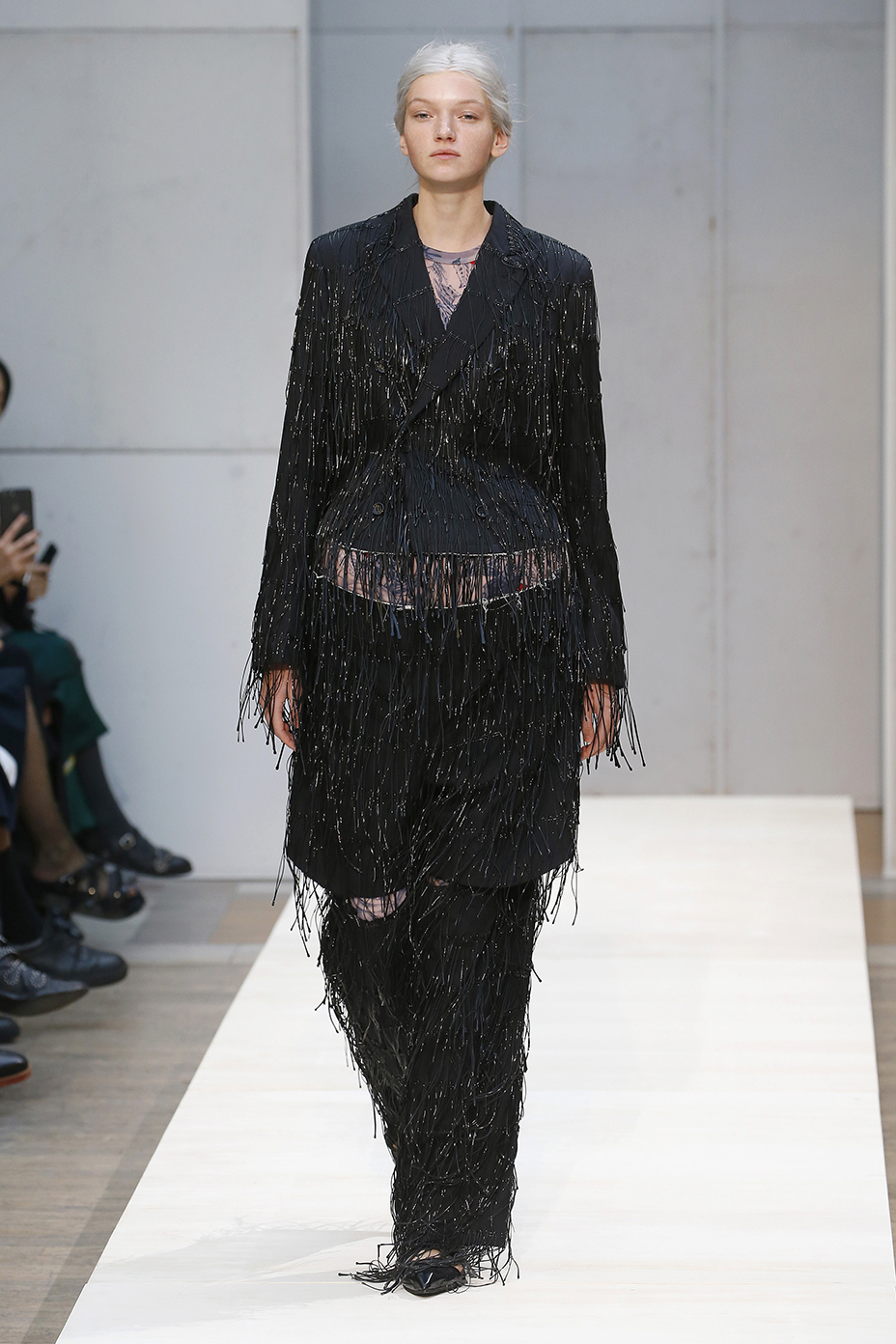 Kawakubo designs in the abstract, with grand, sculptural gestures, and you have to try to experience her shows on a purely emotional level. The models wore gray wigs, and some of their bellies were padded to pregnant proportions, literally splitting open the waistband of tinsely black jackets trousers. Frock coats draped over lumpy, bumpy protrusions extending from the hips or buttocks brought to mind the disappointment so many women feel every day in their bodies. 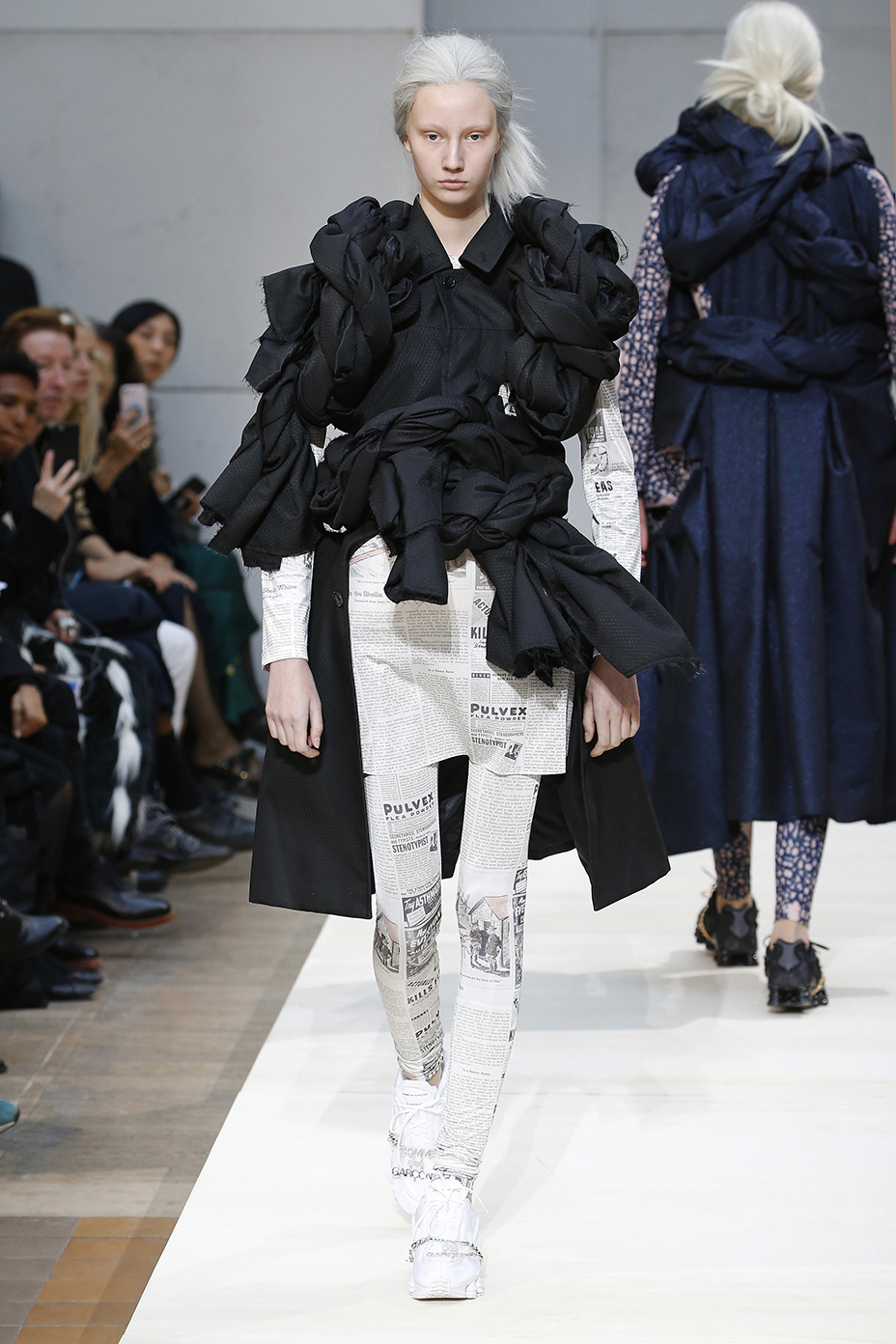 Other looks suggested the times women’s bodies fail them, constricting them like beautifully knotted bow details on the fronts of jackets, or weighing them down like the chains hanging from models’ wrists. There were even headlines (on newsprint Spandex) over some models’ curves, a reminder of the political battle waging over women’s bodies that just last week reached the U.S. Senate with testimony by Christine Blasey Ford. These are indeed trying times to be a woman — and a man.