Capping off the spring 2019 Paris Men’s Fashion Week, Kenzo held a combined men’s and women’s show Sunday night that was a strong indicator of the widening appeal of the June fashion event, which has drawn an impressive roster of both male and female celebrities, including Kim Kardashian, Kanye West and Rihanna for designer Virgil Abloh’s debut at Louis Vuitton, and Robert Pattinson, A$AP Rocky and Victoria Beckham for designer Kim Jones’ debut at Dior Homme.

Ever the entertainers themselves, designers Humberto Leon and Carol Lim flew in the Brooklyn-via-Chicago, family-based Hypnotic Brass Ensemble to serenade their crowd. Guests entered a darkened theater greeted by fauna and flora hanging from the ceiling — meant to evoke “floral clouds” as co-creative designer Leon put it. And these organic-looking clouds moved up and down during the show, while being blasted with laser beams, to create a hypnotic effect.

The rave-like runway scene certainly intrigued VIPs such as up-and-coming U.K. recording artist and sometime Drake-collaborator Jorja Smith who was amazed by the set, saying, “I’m not really sure what to expect.” Ditto for Arizona Cardinal wide receiver Brice Butler who said the ambiance alone had him intrigued. Football players have taken to loving fashion these days and Butler sees the parallels. “I actually think fashion is a bit more intense. While we are both working with teams to develop ideas and work towards a common goal, fashion sometimes only has two tries; fall and spring. I get at least 16 tries each season.” 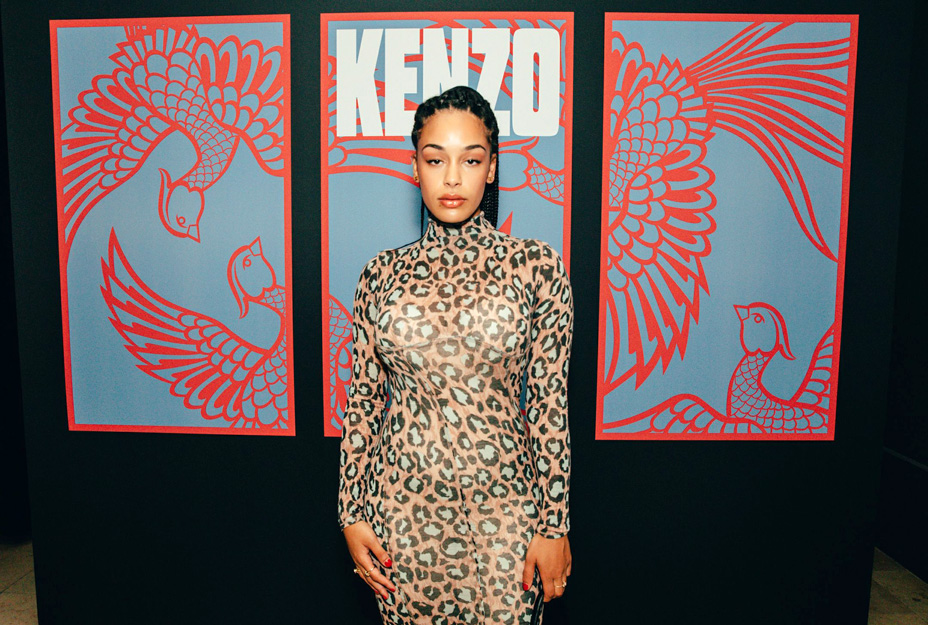 Leon and Lim professed four tenets behind the show — kindness, balance, unity and harmony. The second was clear in the silhouettes that ranged from big and roomy to sleek and lean in both the men’s and women’s collections. 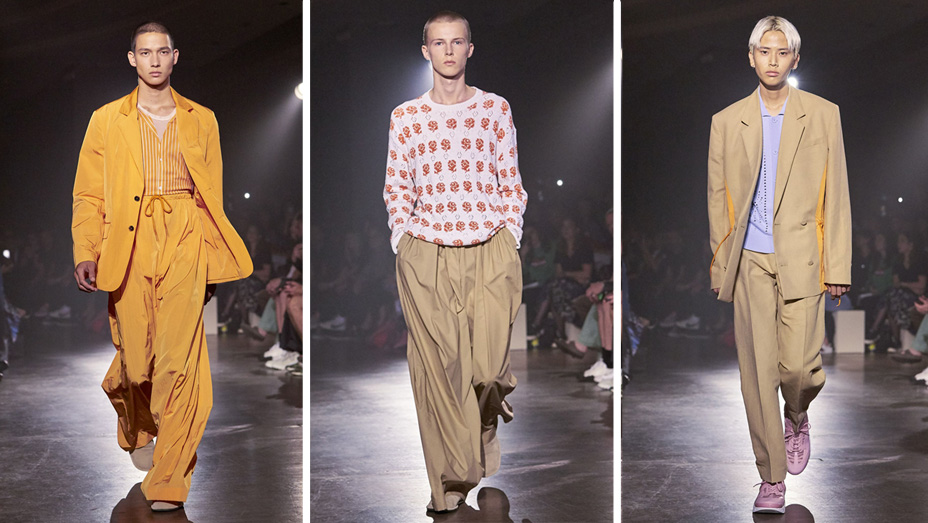 In fact, both collections worked strongly together, drawing upon some of the same themes; technical nylon often in a floral print on full and flowing dresses for her, and worked into the back of a woven suit for the him. As Leon put it post-show: “Feminine gowns inspired the men’s pants; suiting appeared in the woman’s collection … It was about blurring the lines.” 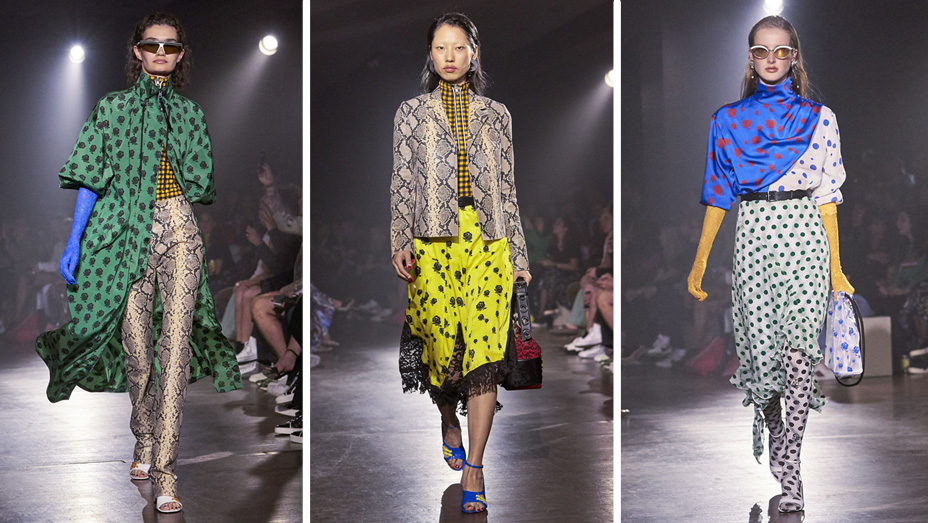 The designers also borrowed heavily from the founder Kenzo Takada’s playbook by mixing bright colors, patterns and textures into one look — a python tunic over a polka-dot blouse and striped flowing handkerchief skirts in contrasting colors, for example. Besides florals, stripes polka dots, plaids and tie-print prevailed, especially quirky in suits and worn with the oversized pants or shorts for men. The prints combos for the ladies intrigued the most when unified within the same garment. The sheer movement showed up chez Kenzo too with tulle overlays on dresses and featherweight knits over woven tops. 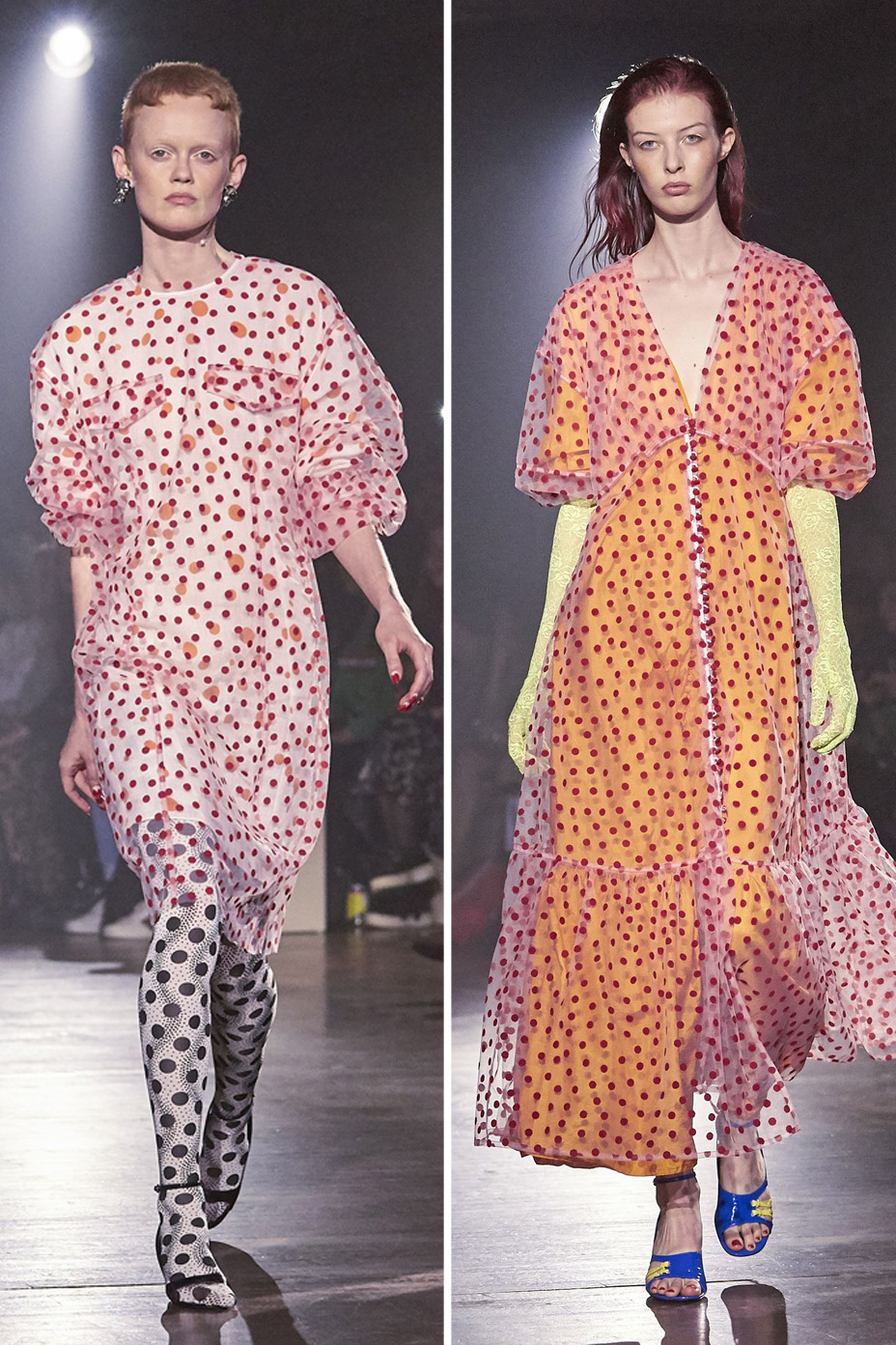 On the kindness front, the designers are two of the nicest people in the business. Lim noted that they were really excited to show the Greek mythology symbol of the Phoenix rising from the ashes, adding, “It’s one of the strongest symbols in the universe.”

Luckily, no need to rise from the bottom for Leon and Lim.