In just two years, his luxe, made-in-Italy hoodies, bomber jackets and jeans have made fans of Kendall and Kylie Jenner, Gigi and Bella Hadid, Rihanna and Beyonce.

“L.A. is the vibe, Milan is where we make it happen and Paris is just home,” says Taverniti, who created the line with wife Joyce Bonelli. 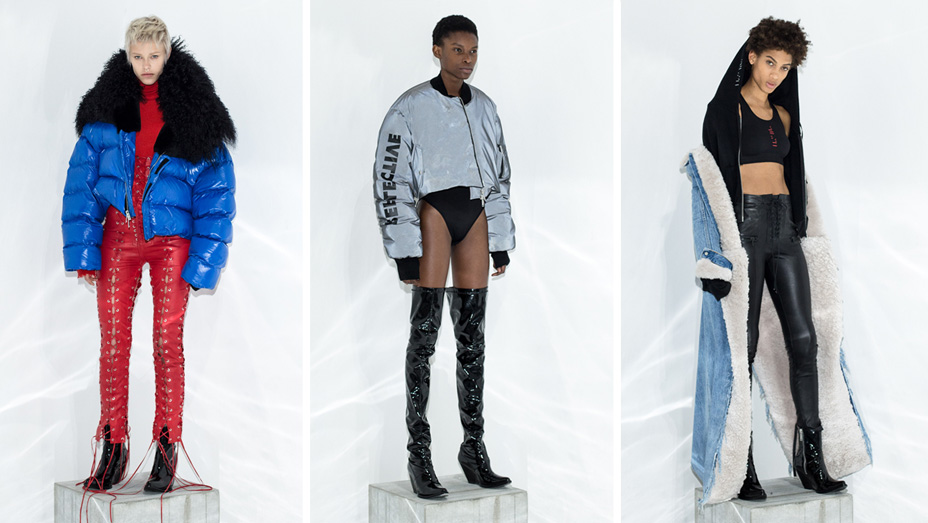 At age 16, South of France native Taverniti moved to Paris to attend design school. It was the mid-1990s and the street style of Mathieu Kassovitz’s seminal film of that period, La Haine (Hate), about tough youth living in the city’s projects, influenced his style, the designer said during a preview for his label during Paris Fashion Week.

Taverniti left for Los Angeles 10 years later, where he’s been a rising design star, first as an assistant to Jeremy Scott and then as creative director of Hudson Jeans. Bonelli has been the Kardashian klan’s makeup artist for a decade, which also explains how Unravel has been able to net so many famous fans so quickly.

The husband-and-wife team set out to create the “new essentials ” — which for fall 2017 means cropped silk puffer jackets; oversized, paperbag waist jeans; and sleek dresses, leggings and bodysuits made out of techno-advanced athletic compression materials. Also in the mix: velvet tuxedo jackets with cutout shoulders and unfinished hems for a disheveled look.

The models love the pieces so much that Kendall Jenner swiped a jacket from the showroom for an afternoon out in Paris; it was all over Instagram before you could say “paparazzi.” An orange puffer was gone not too long after.

“Even though it’s an androgynous streetwear look, when you put it on it’s like butter. It’s easy, it’s cool, but it’s very soft and very feminine,” Taverniti says of the line’s appeal. Fabrics are carefully washed and treated for that worn-in feeling of a favorite old tee. “The fit is incredible and sexy.”

Fan feedback helps with knowing what works and doesn’t, the designers say, but their own wardrobes are truly the inspiration. “It’s a very selfish approach. It’s very important that we wear every piece; if not, it becomes a commercial compromise and we don’t want to do that,” says Taverniti. “What people like is that they feel it’s real and we are not following a trend.”

There’s no visible branding outside of an occasional name written in reverse and Pantone color numbers on some of the reds, ochre and orange jacket sleeves.

They are also not afraid to revisit their own collections, riffing on shapes and volumes from past seasons.

“When I start the collection, I take the previous collection and start playing with things. I cut them, turn them inside out and upside down,” says the designer. “Last season’s jacket is cropped, sweater arms are dropped and a denim jacket gets new leather arms.”

Says Taverniti, “I’m a little bit of a mad scientist.”