From a design standpoint, Virgil Abloh’s proverbial “parent” is safely ensconced at maison Louis Vuitton where he will debut his first men’s collection during Paris Men’s Fashion Week on Thursday.

So, the designer is free to get his teenage rebel freak on for his men’s Spring Summer 2019 Off-White collection showed in Paris Wednesday.

“It’s my ode to the teenager with the subtext of Louis Vuitton in the air. This is the first show where Off-White is sort of unhinged from the resume. It’s distinctly a teenager vibe” Abloh told The Hollywood Reporter. “Like the youth who is free, I can do what I want; imagine the kid standing in line at Supreme or making out in the streets.” 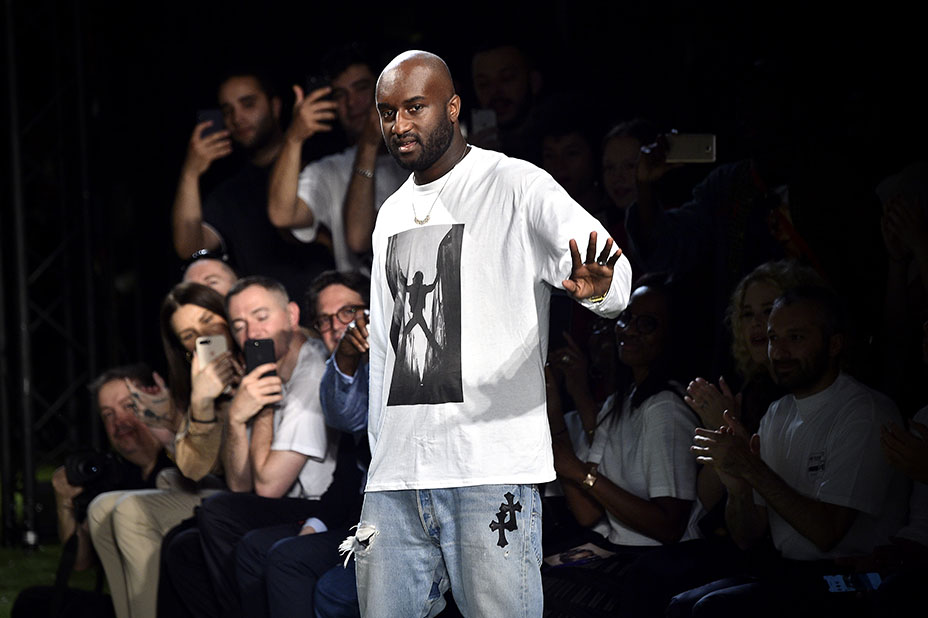 Abloh was free to imagine the idyllic scene in a New York City summer park — “skate kids, homeless kids and even a multi-millionaire hanging out and criss-crossing,” he said, alluding to his intersecting arrow design.

He also threw in some references to late graffiti artist Dondi (most recently loosely depicted by Jaden Smith’s character Dizzee aka Rumi 411 in Baz Luhrmann’s The Get Down) on T-shirts and a marquee white jacket that was hand-drawn on with support from the artist’s brother Michael White, whom Abloh was quick to credit backstage. “I learned art from Dondi by retracing the sketchbooks of New York City street art of the 1970’s with Prismacolor markers,” said the designer. 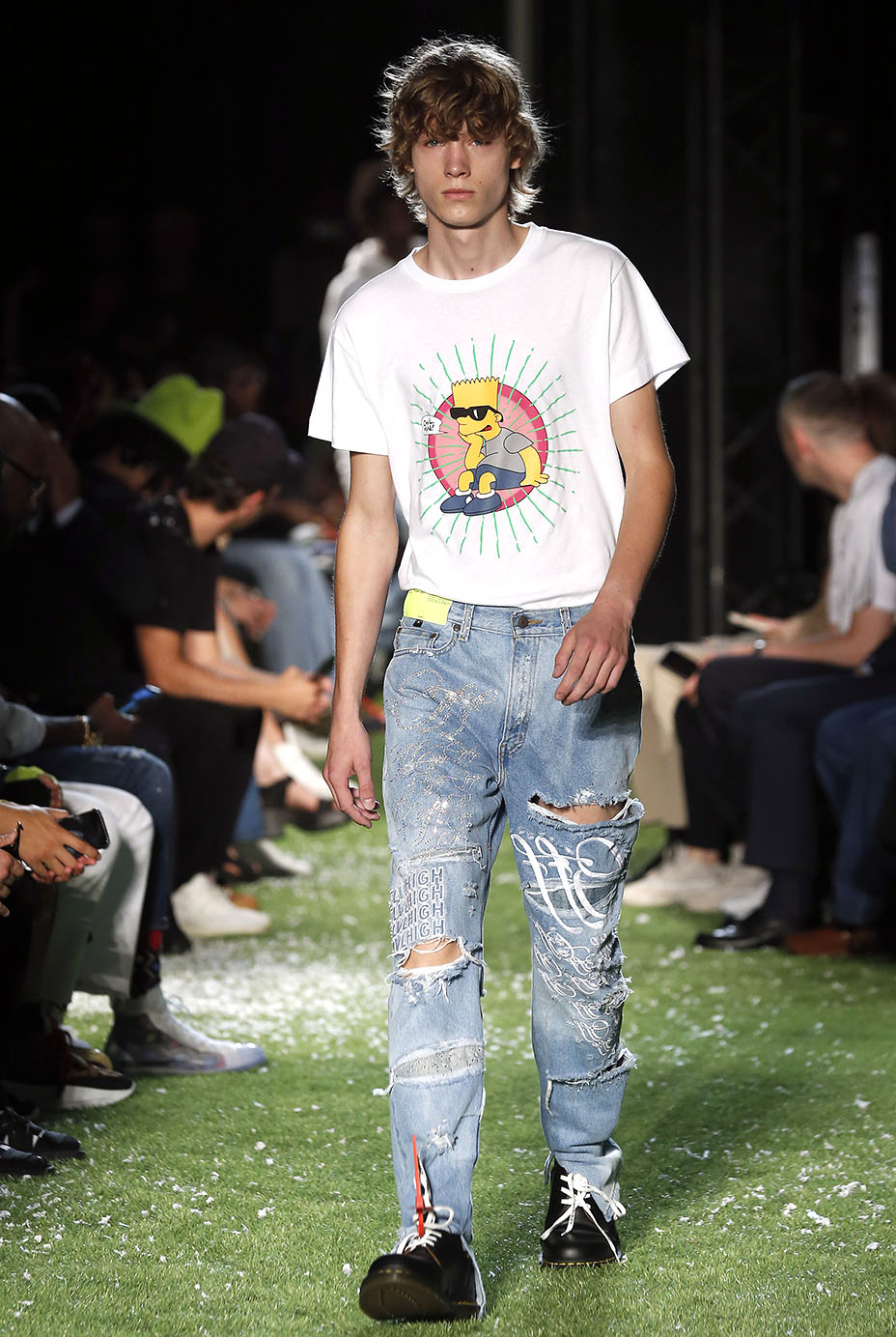 Abloh also recruited two other poster kids of teen rebellion: Bart Simpson and James Dean. The clothes spoke to the uniform that every teen wears — jeans and T-shirts. The T-shirts were naturally oversized and a tad starched in nature and more often than not tucked in, with design motifs ranging from Bart Simpson (who also appeared on a covetable black sweater), to blazing skull designs, graffiti, and the words “Dondi” or “Teenager.” 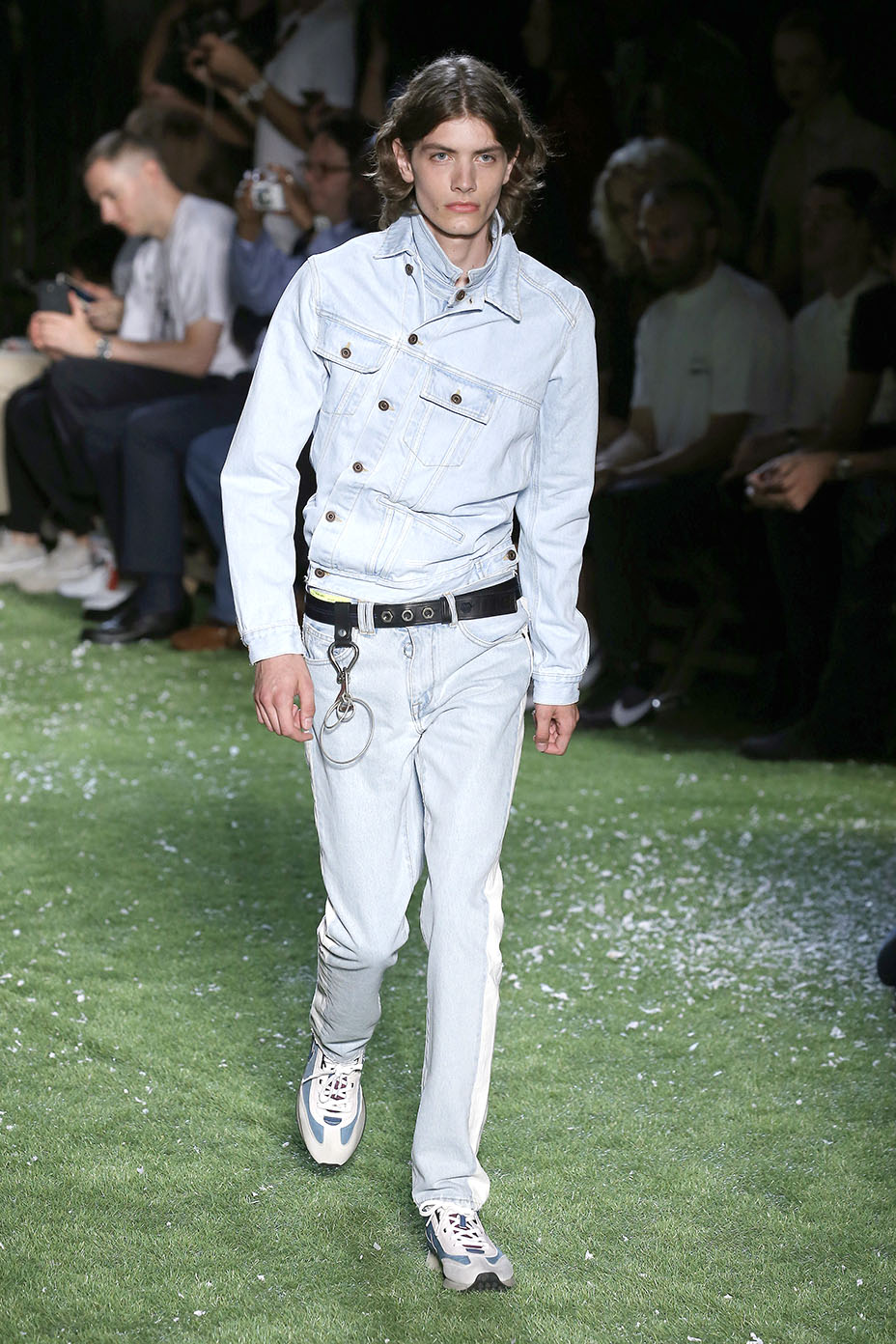 Jeans were jazzed up with clear sequins, glitter pens, a floral fabric and signature off-kilter seaming and pockets everywhere, something Abloh said was partially a duty for a young designer. “All of us have a pair of jeans in our closet so what we can do is edit them, make them new and reconsider them,” he advised. 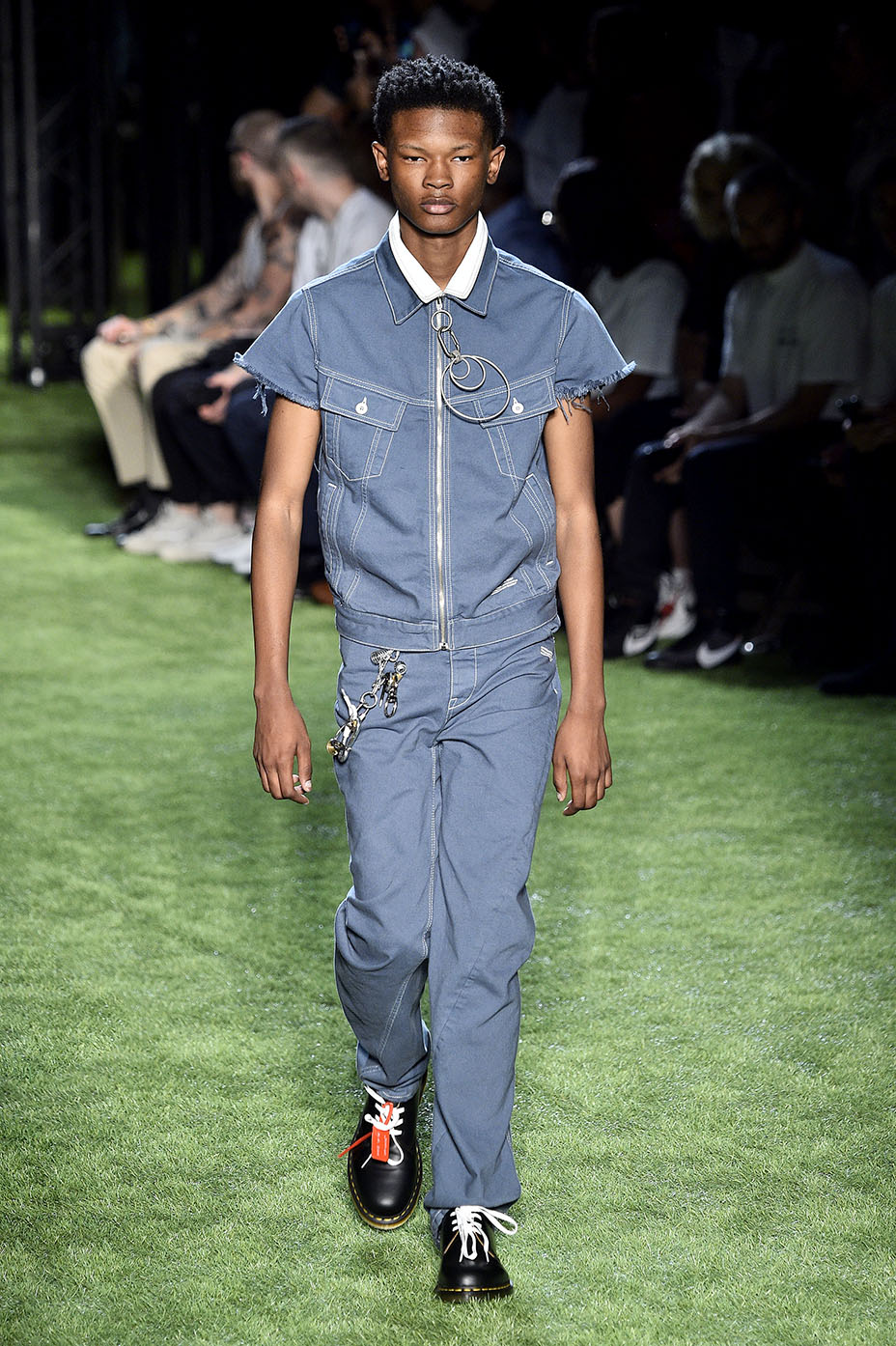 The silhouettes also have the ability to make you look twice, namely high-waist, wide leg mom jean-style jeans for men and massive Margiela-esque spring weight parkas. Though the collection was mainly comprised of staples that were reimagined, he does it in a way that make his legions of fans go gaga — and the pieces looked fresh. His talent partially lies in the ability to give the people what they want next almost before they even know. 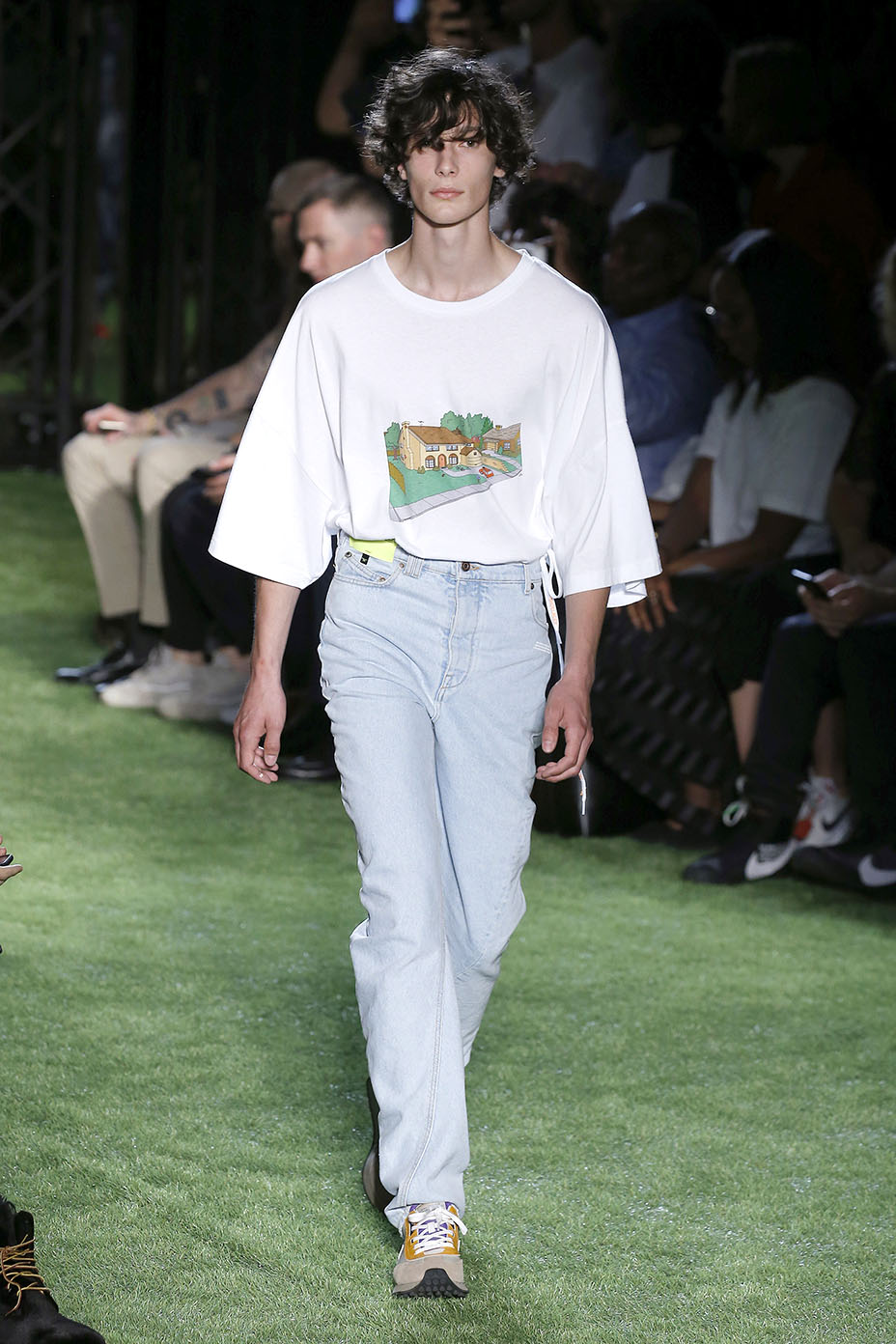 Though the Astroturf set was meant to mimic a NYC park, it also had a suburban tone thanks to the cartoon world of The Simpsons. It was thrown off course as to not risk being too regular by the music: a re-dubbed version of Kraftwerks’ “Trans Euro Express” altered in parts to say “Trans Hip Hop Express,” segueing into a garbled version of “White Christmas” that played while confetti snow dropped from the ceiling. (Abloh is also a DJ, of course.) 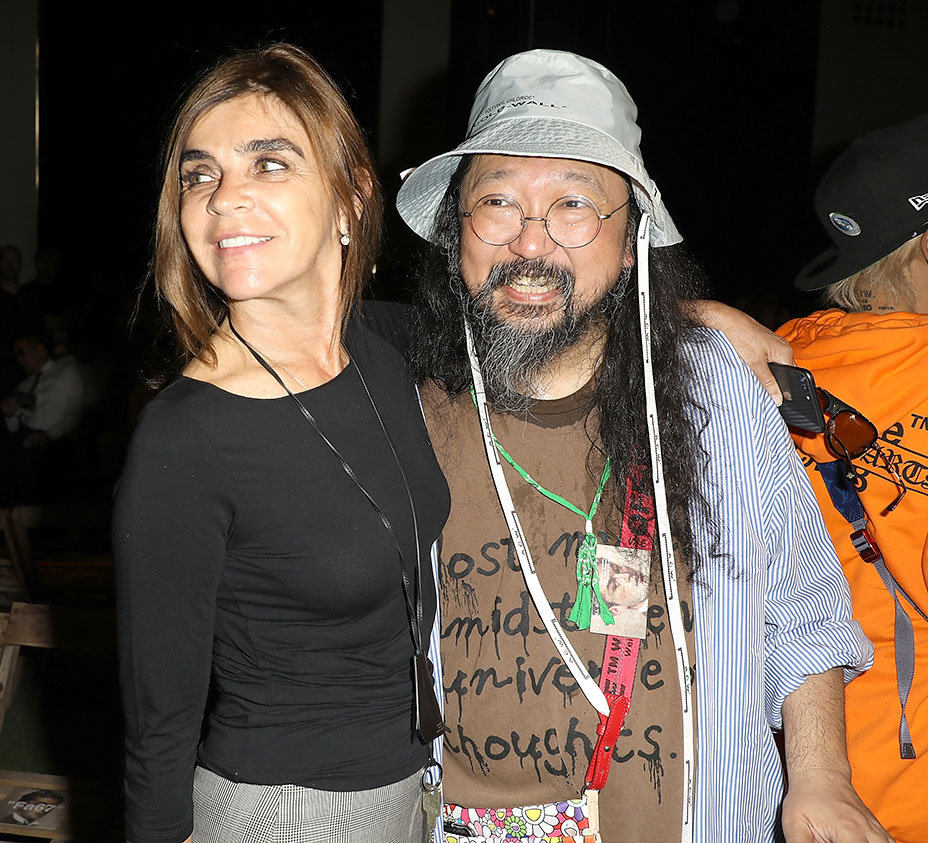 Abloh’s family came in from Chicago to witness the show along with collaborators Ben Gorham of Byredo and artist Takashi Murakami. New works made by the artist and designer make their debut at the Gagosian Gallery in Paris on Friday.

The show ended with a nod to James Dean’s infamous jacket from Rebel Without a Cause. “I’m 37, I’m far from a teenager, but this brand resonates with a youth core that needs a designer to look up to like I had when I was coming up,” Abloh said. (He didn’t say who he looked up to aside from Dondi).

Abloh may also be a rebel but he is not without cause — his cause is to make Gen Z have a designer they worship, buy and wear.