The bodice of the Grecian-style white silk chiffon couture gown (from the fall 2018 collection) is embellished with intricate gold embroidery, gold beads, jewels and pearls. The adornment on the bodice alone took over 85 hours to create, according to a spokesperson for the fashion house, and the open sleeves drape in a cape-like effect — befitting of an awards season superheroine. 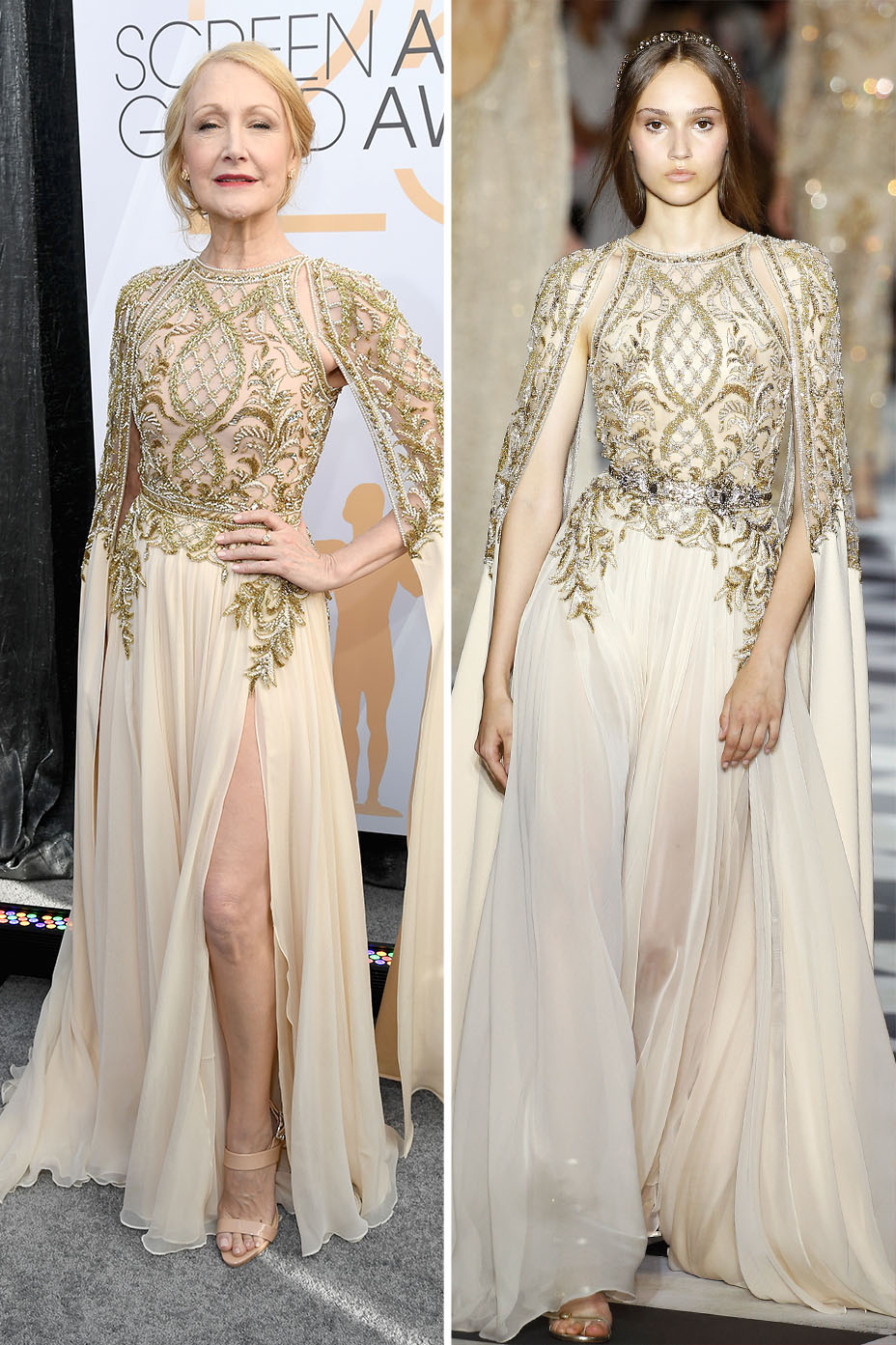 “We met on a magazine shoot last year and she said, ‘Oh, I always have [pictures of] these dresses from Zuhair Murad in my cellphone,’ but she had never worn anything from the designer,” her stylist Victor Blanco told The Hollywood Reporter. “So I said, ‘Okay, we can try.’ She loved two dresses of his that were archival pieces from five years ago that were no longer available. So I looked at styles in the last collection and I saw this one, that was a bit similar, just before Christmas, and I said, ‘I need that dress!’ It fit her perfectly so I just needed to do the hem.”

Clarkson also wears Piaget jewelry and strappy nude patent leather sandals with sky-high heels by Giuseppe Zanotti at the SAG Awards. “She loves high heels and she said, ‘I can go and dance all night in those heels!’” said Blanco. “Those are very, very high, like six inches! These [awards shows] are long nights, but I want her to be happy. I put Formé inserts in the shoes [for days before she wears them] to make them a bit wider so they feel more comfortable.”

As for her pre-stylist days, Blanco says: “She had a nice relationship with brands and PR people in New York, because she lives there, so she always did everything herself and wore amazing pieces from Alberta Ferretti, Prada and Dolce & Gabbana. I wanted to make her more sexy and more fashionable and to get more editorial pieces for her.” 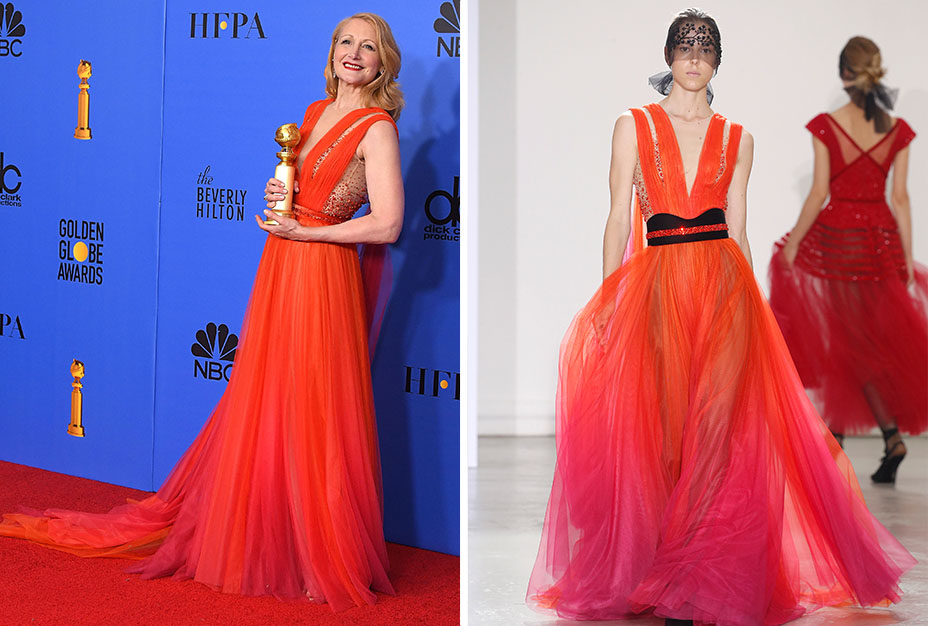 The Barcelona native moved to Los Angeles in 2016 and can be largely credited for the 59-year-old actress’ recent red carpet transformation. The hand-dyed orange and raspberry ombré Georges Chakra Couture tulle gown that she wore to the Golden Globes features translucent cutouts adorned with 500 color-matched Swarovski crystals, according to the design house. And her Critics’ Choice look by Chakra was a “suit-inspired tweed lamé gown” with shimmery silver fibers and 200 Swarovski crystals on the cuffs said a spokesperson; it also had practical pockets and a thigh-high slit. Both dresses had plunging necklines. 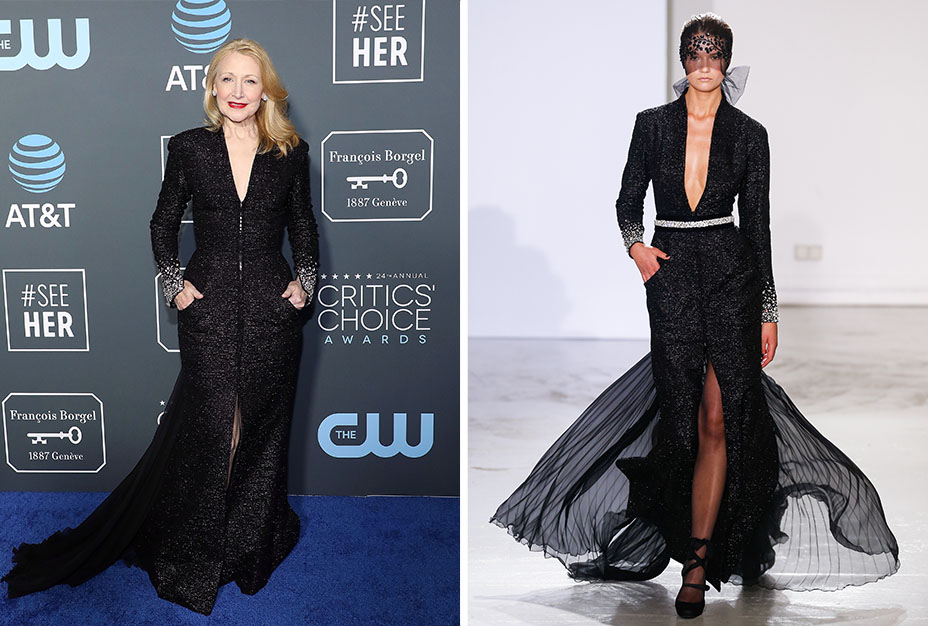 “Everyone supports 20-year-old actresses, but I think it’s very important that a 59-year-old actress who is in her moment and playing with fashion be supported more by the fashion industry,” says Blanco. “Because Patricia is not boring! She loves fashion and she loves to be sexy and powerful and youthful. With #MeToo and all the movements going on right now, I would love her to have more attention. We need to fight, because she is an amazing woman, who just happens to be 59!”