While Karl Lagerfeld, who died Feb. 19, was not present, his presence was everywhere at the Chanel fall-winter 2019 défilé. The last collection he designed for the house with Virginie Viard (who has now taken the reins as Chanel’s creative director) naturally elicited deep reactions on Tuesday, the final day of Paris Fashion Week. Front-row guests included Janelle Monàe, Kristen Stewart and supermodels Stella Tennant, Naomi Campbell, Claudia Schiffer and Karen Elson. Monàe donned a jewel-encrusted Egyptian-inspired dress from the last Métiers d’Art show in New York in December, the last time Lagerfeld appeared on the runway.

Lagerfeld’s longtime friend and collaborator, French fashion editor Carine Roitfeld, summed up the emotionally charged show to The Hollywood Reporter: “I came here very sad and ready to cry, but finally through the magic of Karl — because I am sure he was there — I didn’t cry. It was fantastic; a good vibe.” 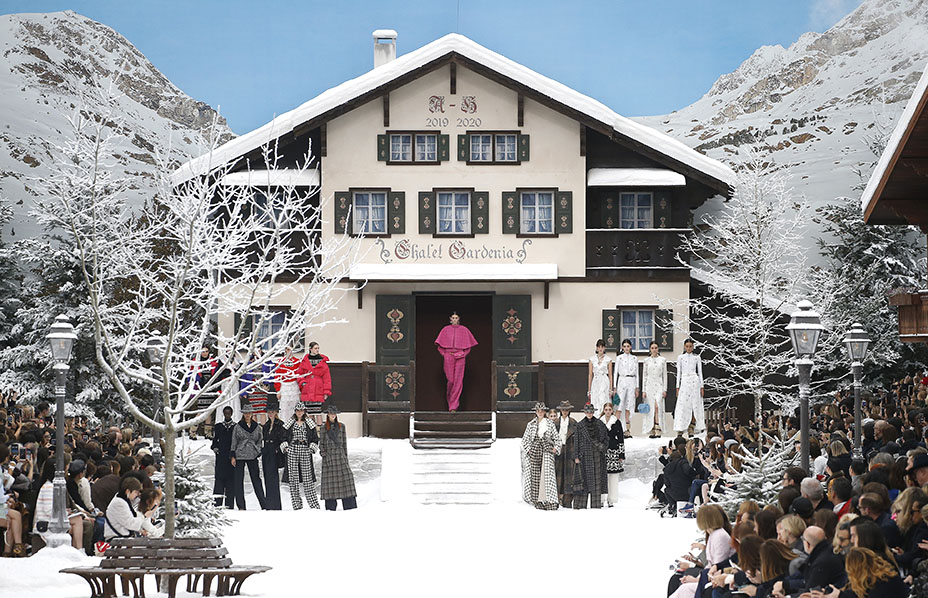 Most tears were turned to smiles upon entering yet another of Lagerfeld’s magical kingdoms, this time an alpine ski village with snow-covered streets and a chalet created in the Grand Palais. In the past, Lagerfeld has staged his sets as a supermarket, a launch pad with a rocket ship and even a women’s march on a re-created Parisian street for spring 2015 pre-#MeToo and the Time’s Up movements, among others.

In the last year or so, Lagerfeld had been referencing his beloved homeland of Germany. The fall-winter 2018 set recalled the forests near the estate where he was brought up with 12 allées of trees, while spring-summer 2019 took guests on a seaside jaunt to the seaside island of Sylt, Germany, where he spent holidays as a child — complete with sand, water and a lifeguard tower.

Famed photographer Ellen Von Unwerth told THR that the setting was typical of a Bavarian ski town such as Oberstaufen, where she grew up, and shared memories of Lagerfeld: “We would speak in German backstage in our own bubble. Once he showed me his eyes, [but] he said he didn’t like to show them because they were sad eyes.” 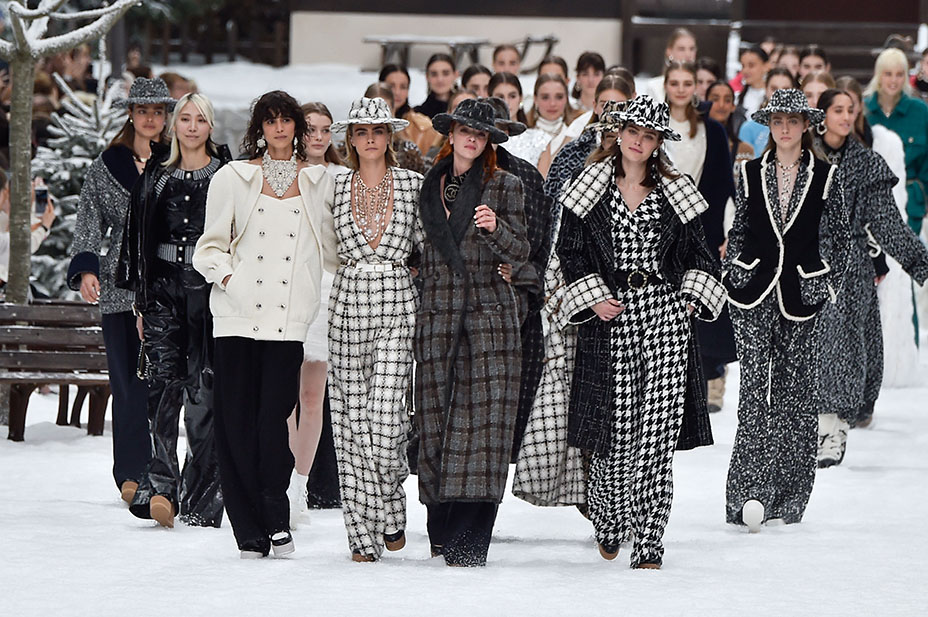 The show began with a series of chiming bells, alluding to a mountain cabin mobile chiming in the wind or calling to mind the character Zuzu Bailey in It’s A Wonderful Life saying, “Every time a bell rings, an angel gets his wings.” An announcer asked in both English and French for a moment of silence that was honored, save for the stubborn handful of photographers who kept triggering their shutters. Penelope Cruz, a Chanel brand ambassador who walked in the show for the first time, told reporters afterwards, “I love that everyone took time at the beginning of the show, when they asked for that minute of silence, because it made everyone stop and breathe and it made the right kind of energy.”

A recording of Lagerfeld’s voice from a recent Chanel podcast then came over the PA system, with the designer explaining his decision to say “yes” to the role of creative director in 1983, when Chanel was in a deep business rut. “Chanel was the first time that a brand became fashion,” he said. At the end of the recording, he broke from French to say in English, “It’s like walking in a painting.” Indeed. 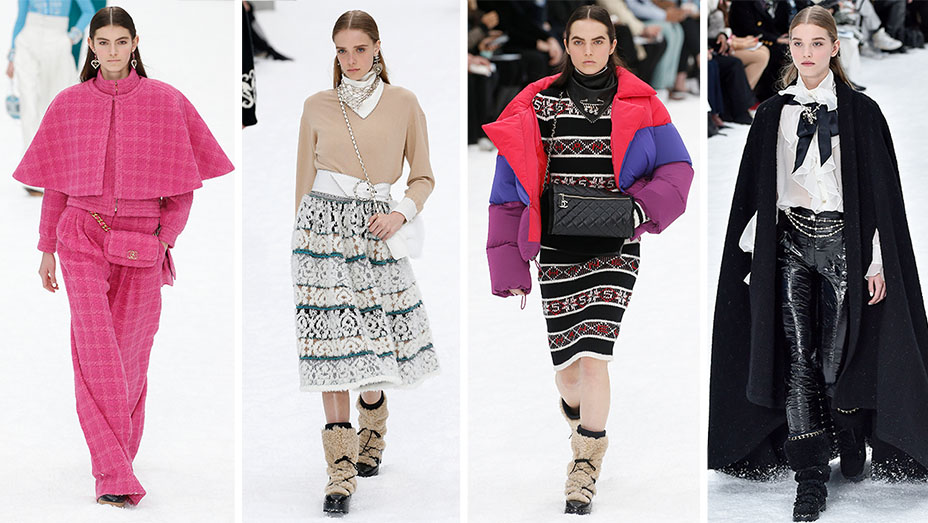 Of course, then there were the clothes fit for a mountain romp. Tweeds and herringbones (shown in both classic black and white and intarsia-knit brights) and oversized plaid checks were mixed and matched as broad shoulder duster coats over pantsuits and skirt suits. Cozy Nordic-inspired sweaters, sweater dresses and dirndl-inspired skirts (often teamed with sheer chiffon sport hoodies over white shirts) were paired with fur-trimmed boots.

There also were colorful updates on puffer coats and parka vests finished with CC-logo belts, a long princess duster with a train and floor-length capes that added to the fairy tale mood. Shiny high-waisted patent leather pants in tan, white and fuchsia looked fresh, as did kerchief-like scarves, furry camellia hair ties and new furry and puffy takes on classic Chanel bags. For evening, a bevy of snow bunnies wore a range of white tuxedo and pant looks with glammed-up puffer coats; the finale featured Cruz, Kaia Gerber and others in luxe snowball-like dresses with fur pouf skirts. 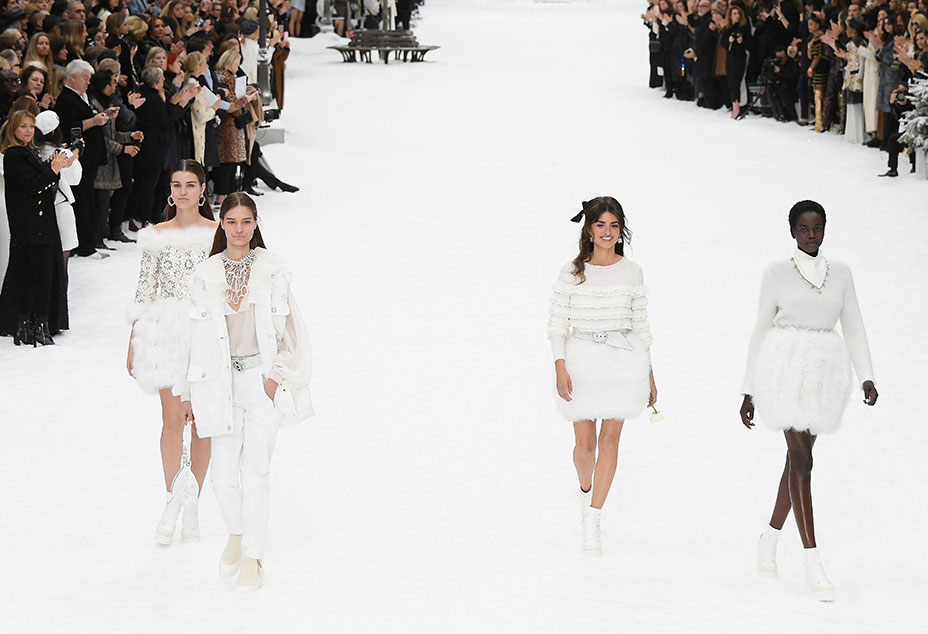 Viard bashfully appeared at the chalet entrance to take a bow, as David Bowie’s “Heroes” played and models such as Cara Delevingne and Mariacarla Boscono wiped back tears while clapping in unity for their final turn on the runway.

British Vogue editor-in-chief Edward Enninful told THR: “[With] a lifetime of work and the beauty of shows like this, he is not gone; he will always live on because the work lives on — especially the laughter and the memories.”

Visibly moved, Monàe told a group of reporters, “It was deeply emotional and magical at the same time. Chanel is one of a kind and it’s always an experience that I take with me and I feel inspired every time I leave, as an artist, to create more memorable experiences and to give the gifts that I have been blessed back to everyone else.”

Cruz added that the “collection I saw today gave me the chills; it was the past, present and future. I was smiling and crying at the same time, seeing all these people celebrating him together and at the same time the beginning of something else.”