Driving through Malibu on Tuesday “looked like Mars,” says lawyer and businesswoman Krissy Lefebvre. The wife of television chef Ludo Lefebvre was on her way to deliver hot food to fire stations working to fight the Woolsey Fire in Malibu, which is about 50 percent contained after burning nearly 100,000 acres in Ventura and Los Angeles Counties.

“There were segments of PCH that looked like Mars, because all the brush had been burned down and it was just black and orangey,” Krissy Lefebvre said. “Driving down PCH, you can envision there’d be all the power lines and the power poles. [They were] just broken in half and dangling.” 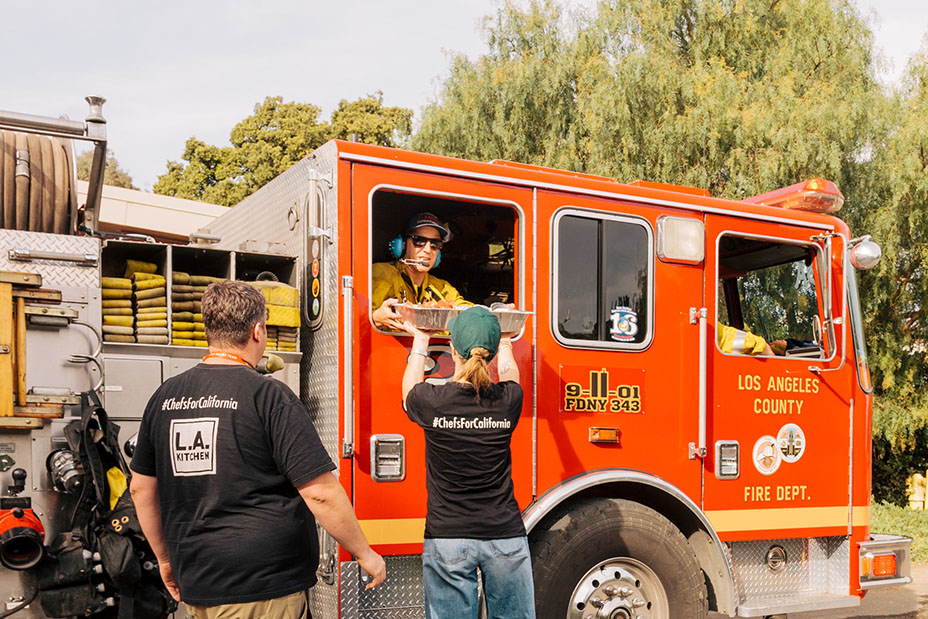 The efforts were in coordination with their friend chef Jose Andres’ charity World Central Kitchen, a non-profit he founded after the earthquake in Haiti to provide culinary training and resources to end poverty and hunger. Lefebvre (a producer of the TV series Ludo Bites America and former contestant on The Apprentice) has admired his charity work for Puerto Rico and previous wildfires and hurricanes, so she asked him how she could help in Malibu.

Andres was not on the ground in California at either of his two L.A. restaurants — The Bazaar and Somni — but his team set up a release kitchen or “command center,” as Lefebvre calls it, at Costa Pacifica Centers for Children & Families in Camarillo, California. A wall of butcher paper laid out the 25 shelters and sites in Southern California to which they are delivering food. They also gave out sack lunches to people who are still in mandatory evacuation zones, said Tim Kilcoyne, World Central Kitchen chef lead. 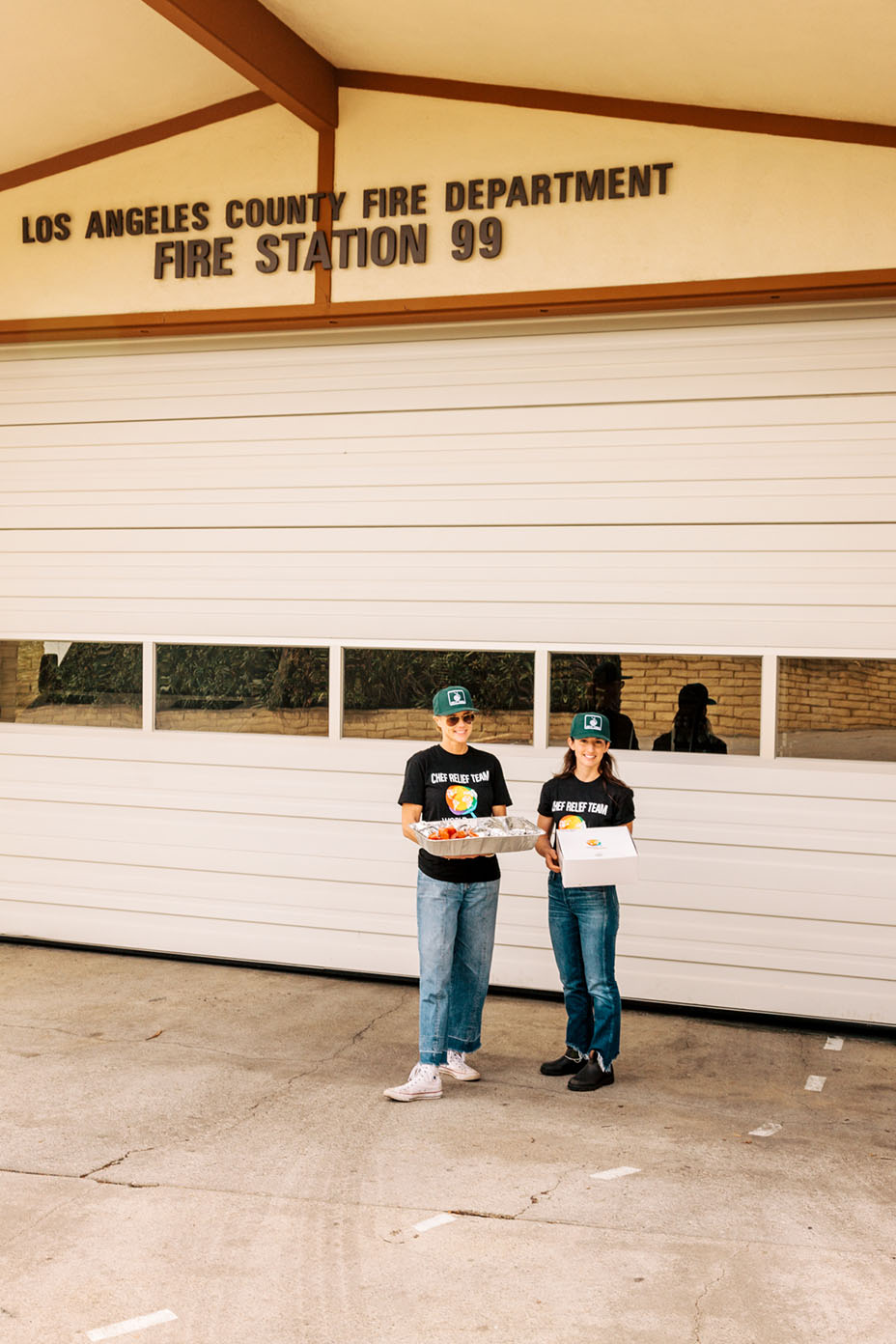 “He’s built the systems to be able to allow people to help,” Lefebvre added. “I could never have gone past the [road] closures to be able to deliver the food directly, but his team has those relationships with the firefighters … The problem is there’s no electricity up there. So the firefighters, obviously they don’t have time to be cooking anyway, but it was just being able to try and provide something back to them.”

She said two Camarillo Trader Joe’s had lost power, so the grocery stores delivered their fresh food to Andres’ center, in addition to the L.A. chefs cooking in the kitchen and 200 volunteers a day packing and distributing the food in an assembly line in a gymnasium. D’Amore’s Pizza in Malibu — Ray Romano’s fave — has also remained open to serve first responders free of charge; Kilcoyne added that Andres’ organization will take care of his bills and provide raw food products, so Joe D’Amore can “do what he’s been doing” by continuing to cook and serve pizza.

“Jose, as he said to me on the phone, he said, ‘One plus one equals four’ because we all have such power to give. For me, it was more about seeing what one person could do by rallying people that he knows and people’s desire to be able to want to help,” Lefebvre said of the organization. 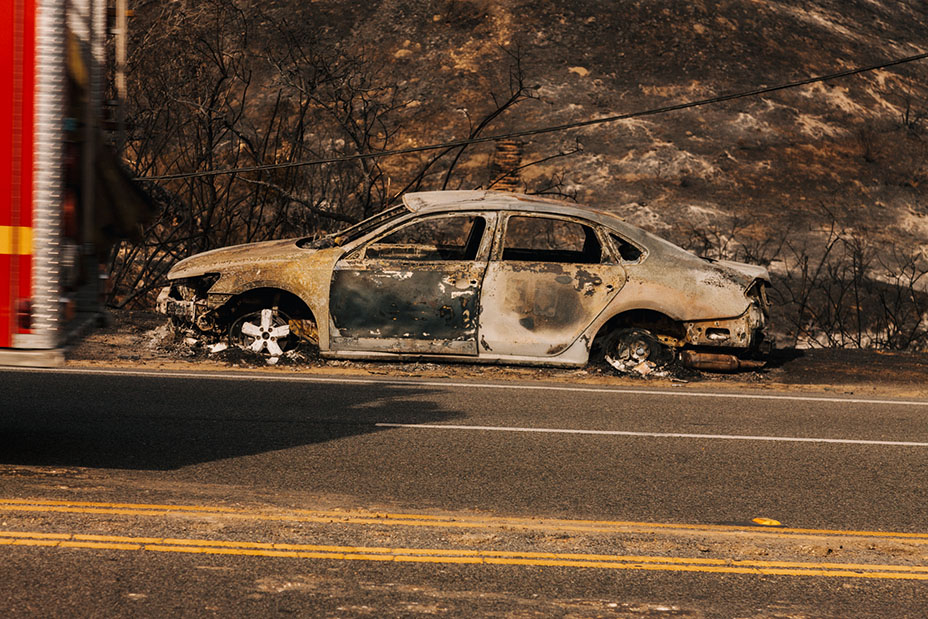 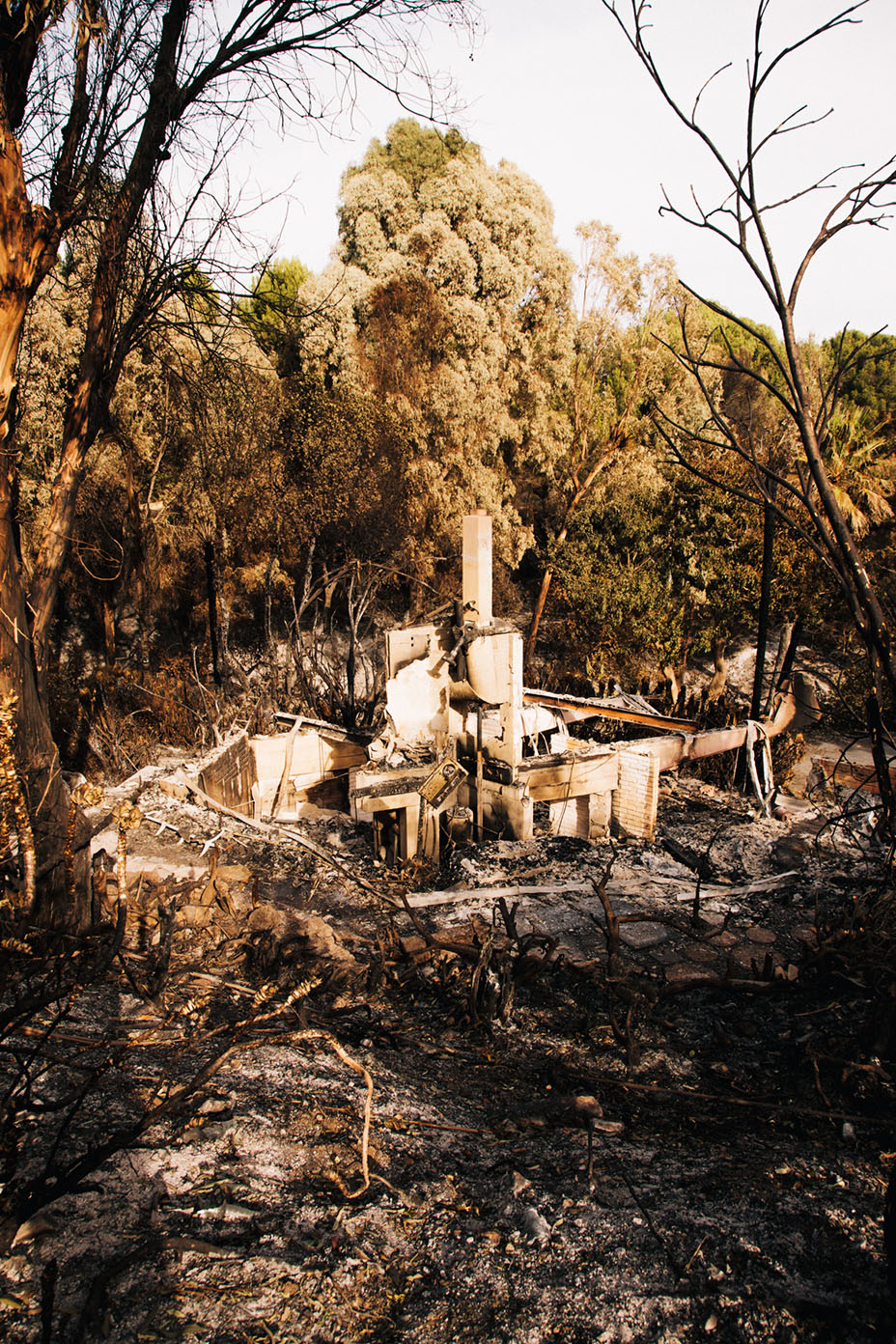 Driving through Malibu to deliver meals to four stations was “eerie — I’ve never been on PCH without traffic.” She saw burned trees and brushes all the way down to the water line, and every now and then “a random house that obviously just had an ember fly or something that just burned down in the middle of beautiful homes all the way around it.”

She left sandwiches at the first station, which was empty, and at another she met with some first responders. The exhausted workers just wanted to rest and eat for 30 minutes.

“They just want to sit down and have a cold glass of water and a hot burrito and put their feet up,” Lefebvre said. “It was nice to feel like you could do something for them when they’re out there risking their lives to save lives and property for the last five days and not sleeping. Whether it be the firefighters or the sheriffs or the police officers that we spoke to, we just wanted to do a little bit.” 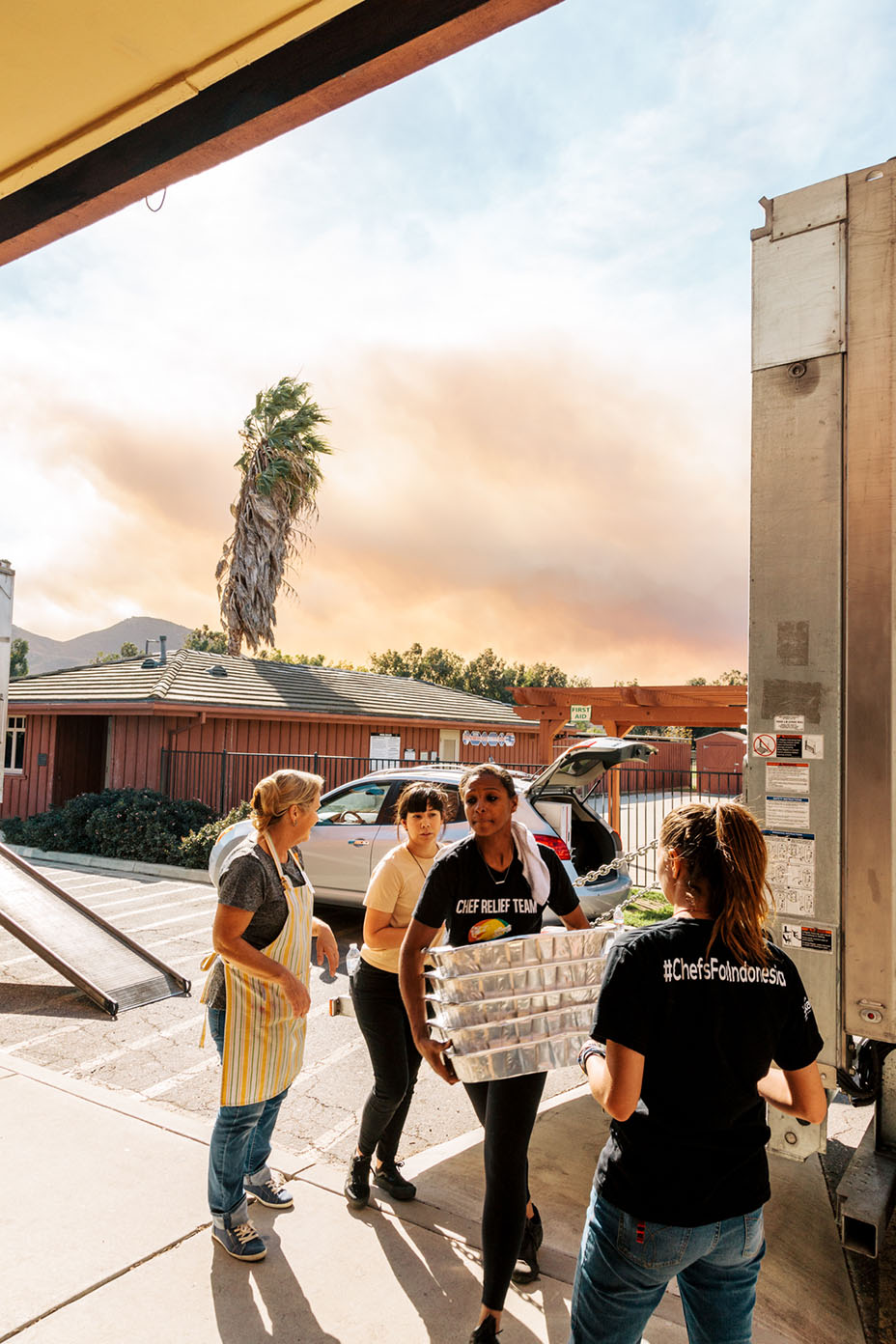 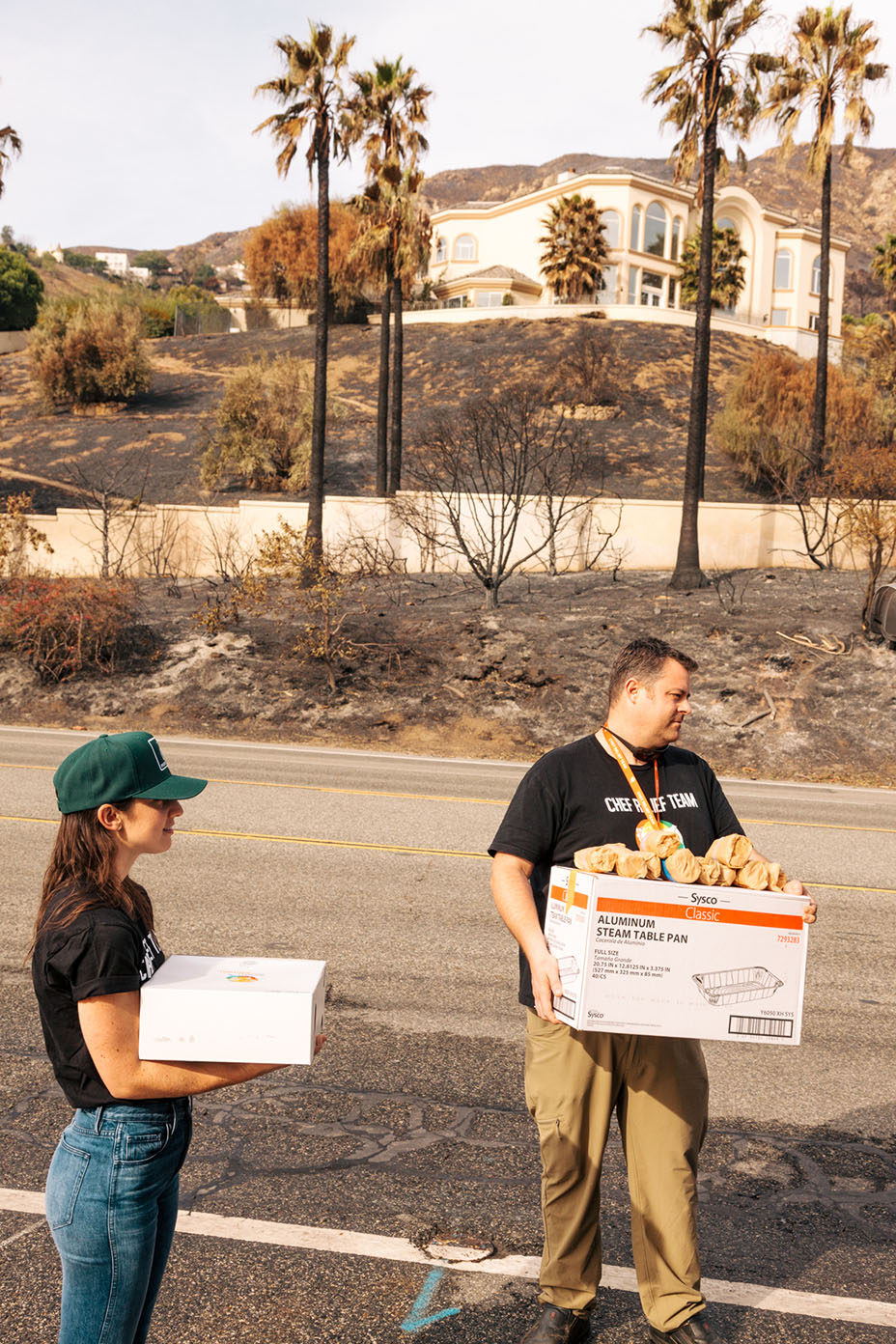