Refreshingly, this Oscars season has put an unprecedented number of age 40-plus women in the fashion spotlight, from I, Tonya‘s Allison Janney, 58, to Mudbound‘s Mary J. Blige, 47; Lady Bird‘s Laurie Metcalf, 62, to The Shape of Water‘s Octavia Spencer, 45. But navigating the politics of red carpet dressing can be harder for non-ingenues. Even if you are an Oscar nominee, fashion houses won’t always loan to you, much less make custom designs, especially if you are not a sample size 0 or 2. “It stupefies me when brands pass over older women because they have the purchasing power,” says stylist Tara Swennen, who has had to suss out gowns from lesser-known designers for Janney, a size 6, including the metallic sequined Yanina Couture gown that landed her on many SAG Awards best dressed lists.

Twenty-something starlets still may be more likely to score six-figure fashion and beauty contracts from Dior, Chanel and Louis Vuitton. But older actresses are emerging as a red carpet force, serving as relatable role models for older customers and offering an opportunity for rising designers to make a mark. “A lot of brands have a tight target list of who they want in their clothing,” says stylist Mary Inacio, who works with Metcalf. But as a star gathers nominations, doors can open. “In the beginning, it was not easy to pull for Laurie,” adds Inacio. “Brands didn’t see her as a fashion person. But then the Globe nominations came, and she was on Colbert wearing a Rag & Bone sweater, giving off fashion-editor vibes, and they started to realize she has a good body, she has style.”

Even in youth-obsessed, Botox-plumped Hollywood, image makers are seeing a return on dressing older women. “The women who can afford to play in this rarefied air of designer fashion are age 35 and up,” says Neiman Marcus fashion director Ken Downing, who says when he’s buying for the store, Cate Blanchett, 48, is an icon he returns to often. (Nicole Kidman, 50, is another example of an over-40 star who has no trouble attracting the admiration of the fashion industry.) It hasn’t hurt that mainstays of mature dressing, including covered-up silhouettes and timeless black, have been trends on the red carpet in the season of #MeToo and Time’s Up. 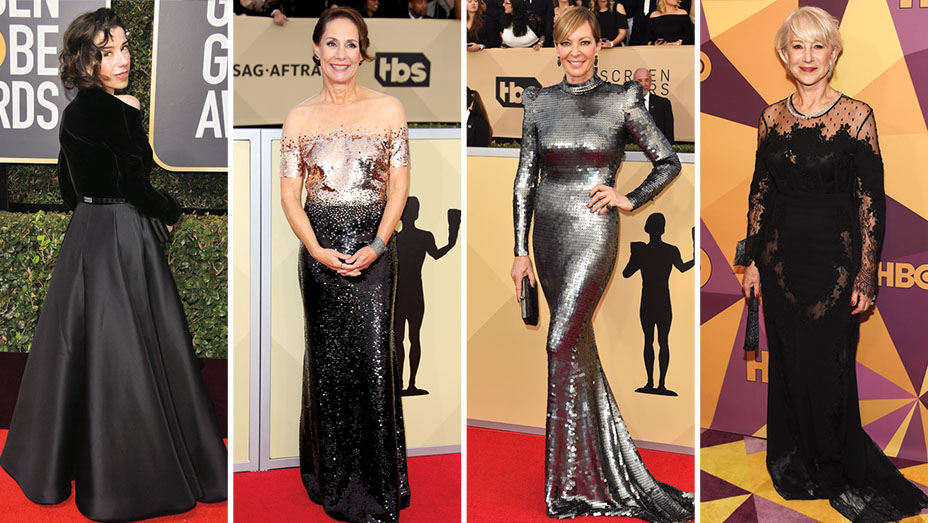 Over the years, Los Angeles designer Monique Lhuillier has dressed many a Hollywood starlet, including Blake Lively and Taylor Swift. But the single most transactional red carpet placement of her 20-year career was at this year’s SAG Awards, when she dressed 72-year-old Goldie Hawn in her robin’s egg blue crepe column gown. “She’s not your typical fashion icon, but she looked amazing,” says Monique Lhuillier CEO Tom Bugbee, explaining that the $2,595 Resort 2017 season style was rushed back into production in response to dozens of inquiries. “It’s a nice shape, not so tight and unforgiving,” he says, adding that some older stars have more selling power on the carpet “because they are more familiar.” People instantly recognize Goldie Hawn; Margot Robbie, perhaps less so.

Stars who are not sample size face their own challenges. “Have designers opened up to Octavia? Not all of them,” says Wendi Ferreira, who with her sister Nicole Ferreira has been styling the actress for more than six years. Exceptions are Zac Posen, Prabal Gurung and Tadashi Shoji, who has dressed Spencer on more than a dozen occasions, and notes that a version of Spencer’s 2012 ivory tulle short-sleeve Oscars gown sold particularly well at retail. “There’s a fine line between being covered up and matronly,” says Ferreira, adding that Spencer and their other Oscar-nominated client, Sally Hawkins, 41, insist on looks with sleeves. “Those are the conversations we are constantly having: how can we show a little skin but not too much.”

Interestingly, brands that traditionally have a mature clientele, such as Oscar de la Renta and Carolina Herrera, often are less open to loaning to older actresses, say sources (although Valentino recently dressed fashion renegade, feminist actress and nominee Frances McDormand, 60, for the BAFTAs). But legacy fashion’s loss has been new designers’ gain. “I dressed Selma Blair [who is 45] recently in what became my top-selling style of the season,” says designer Christian Siriano.

Other designers are rethinking their red carpet strategy with older talent in mind. “We started to look at who our customers are; they are mostly over 35,” says Sachin Ahluwalia of Sachin & Babi, which made a gown for Metcalf for the SAG Awards — and tapped Maye Musk, 69, mother of Tesla CEO Elon Musk, for a new campaign. “The red carpet goes through cycles,” says stylist Swennen. “Where the past few years have been about the young thing, with the women’s movement right now, it should be about owning your age.”