Pose actress/writer/producer Our Lady J on Tuesday called out the Los Angeles Times for placing her on its worst dressed list at the Golden Globes, writing that they were body-shaming her and explaining that as a transgender woman, she did not have the same access to dresses as other women on the red carpet. She chose her emerald mermaid gown from Fouad Sarkis because it was one of a select few that fit her.

“Thank you @latimes for body-shaming me on a night celebrating the talents of my MIND, not my BODY. It’s not my first time on a worst-dressed list, so I’m not at home crying. But I am angry that you don’t understand the fact that top designers don’t make clothes for my body,” the actress, who plays Sherilyn on FX’s Pose, wrote on Twitter.

Our Lady J continued, “I am a 6’2” trans woman who weighs a healthy 225 lbs. This was one of 8 gowns in the entirety of Los Angeles that fit my body, and I chose it because it fit my body. I think it’s beautiful, but yes, I would love to have the option to wear the dresses that are on your ‘best’ list.”

The L.A. Times article said that she was wearing “one of our least favorite looks — a busy mermaid gown … A simpler green gown would have worked marvelously.” She was styled by Veronica Graye with hairstyling by Johnny Stuntz and makeup by Paloma Romo. Gems from Mahrukh Akuly Jewelry completed her red carpet look.

“When you judge women for what they’re wearing, you’re not only judging the fabric on their bodies — you are judging their actual bodies, the medical history of their bodies, and the emotional struggle they have with their bodies because of articles like this,” Our Lady J said. 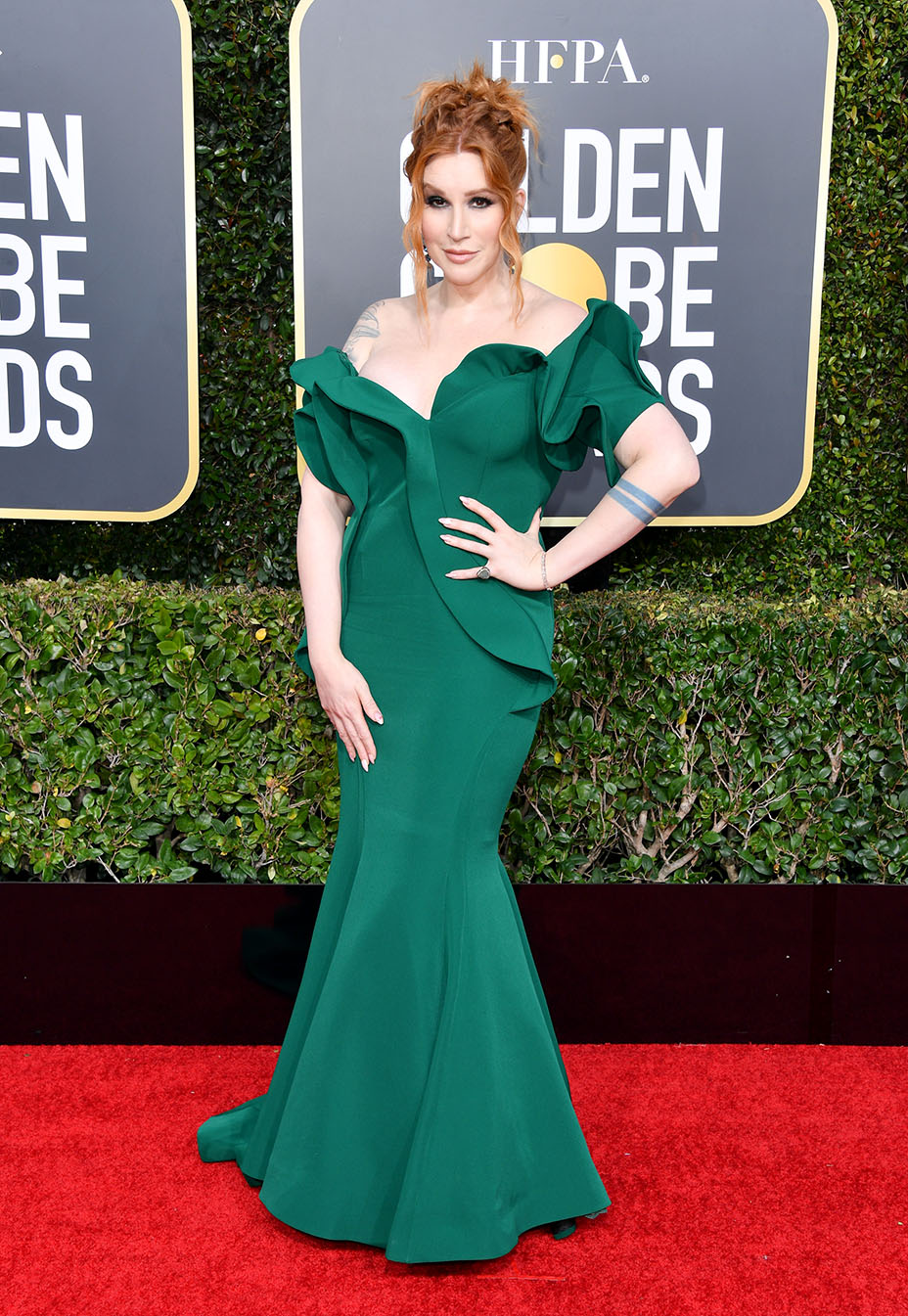 Not only did her comments draw attention to the issue, but the show itself is making history in regard to trans representation: FX’s Pose was the first TV series with a mostly trans cast to be nominated in any category at the Globes — for best TV series drama and TV actor drama for Billy Porter (who sported his own fierce, over-the-top red carpet ensemble to the Globes).

Both the entertainment and fashion industries have faced backlash for unwillingness to include larger sizes and models. In December, star stylist Elizabeth Stewart, who works with Rebel Wilson and Julia Roberts, hosted an event with 11 Honore to bring attention to the need for body inclusivity on the red carpet. The L.A.-based, plus-sized boutique carries sizes 10 to 20 by designers like Zac Posen, Prabal Gurung, Jason Wu and Christian Siriano, who famously answered Leslie Jones’ call on Twitter in 2016 when she wrote, “so funny there are no designers wanting to help me with a premiere dress for movie. Hmmm that will change and I remember everything.”

“Size doesn’t preclude you from being a star,” Stewart told THR. “I am on a mission to have fashion adapt. I don’t think it’s written in stone samples have to be tiny.”

Gurung spoke at a summit in December about his push for diverse models on his runway and why he collaborated with retailer Lane Bryant. “For the longest period of time, this girl has been treated as if she belongs in the corner,” he said. “She deserves pages of Vogue. She deserves to be shot by the best photographer. So we shot Ashley Graham [for my collection], and we did the page of Vogue. It was very important for me. My actions validate their existence.”

Thank you @latimes for body-shaming me on a night celebrating the talents of my MIND, not my BODY. It’s not my first time on a worst-dressed list, so I’m not at home crying. But I am angry that you don’t understand the fact that top designers don’t make clothes for my body. pic.twitter.com/EMYALf4qVO