The first two Democratic primary debates of the 2020 presidential campaign kicked off in Miami back-to-back Wednesday and Thursday nights with a lineup of 20 candidates in total. Washington, D.C.-based founder of image consulting firm Styleauteur and Style Bible: What to Wear to Work author Lauren A. Rothman — who counts members of Congress, White House staffers and legal practitioners at the U.S. Supreme Court as clients — watched the debates with The Hollywood Reporter. Here, Rothman weighs in on the signals that candidates were sending with their style and how the end goal is not to have anyone talking about the outfits, so the focus can be where it should be: on the messages coming out of the politicians’ mouths. — Ingrid Schmidt 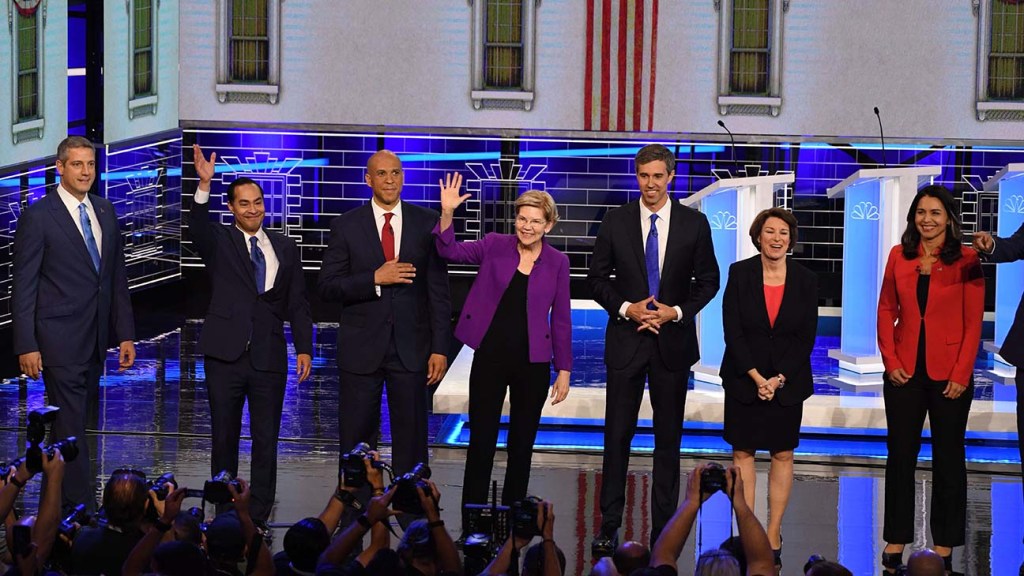 At this week’s presidential primary debates, candidates projected power through image. And, for the first time in years, almost everyone on stage looked polished and professional — a welcome reprieve from any distracting ensembles that could take the focus off policy. Men have upgraded the often frumpy, oversize suit that was once a political uniform for well-tailored pieces, while the many female candidates are free to define individual style templates that move beyond the Hillary Clinton power suit. Now we have U.S. Sen. Kirsten Gillibrand in her trademark short-sleeved, A-line dress, and U.S. Sen. Elizabeth Warren and U.S. Representative Tulsi Gabbard in columns of black (slim trousers and a shell) with a pop-color tailored jacket, sometimes swapped for a cardigan on the campaign trail.

A tightly controlled image is a necessary evil in politics; the ideal dress code reflects a capable, confident candidate. And candidates’ style choices need to speak to a broad constituency. You don’t want to dress too “rich” (i.e., overly sleek or chic) or be called out for a fashion faux pas. In a social media-driven culture, small things matter. Even the slightest nonverbal cue can communicate a larger message.

Taking care of our basic needs first will allow us to better focus on solving the big problems of our time like climate change. That’s why we need to pass the #FreedomDividend and get the economic boot off the throats of millions of Americans.

Two notable examples in Miami were a departure from typical presidential debate style. Tech entrepreneur Andrew Yang stood out for not wearing a tie and leaving his top button casually undone (a move that read casually entitled rather than commanding), while the trademark silver streak gleaming in Gabbard’s carefully coiffed dark hair had the optics of being pulled-together yet slightly edgy.

Our leaders have failed us, taking us into one regime change war after the next, leading us into a new Cold War & arms race, costing us trillions of our hard earned tax payer dollars & countless lives. This insanity must end. #tulsi2020 #demdebate

While red, white and blue hues and ties patterned with polka dots and stripes are standard fare at this level of debate, a handful of candidates broke the code by bringing in a dash of individuality with an array of colors that had deeper political significance. The contenders attempted to dominate the room with symbols of patriotism, no-nonsense power and relatability. 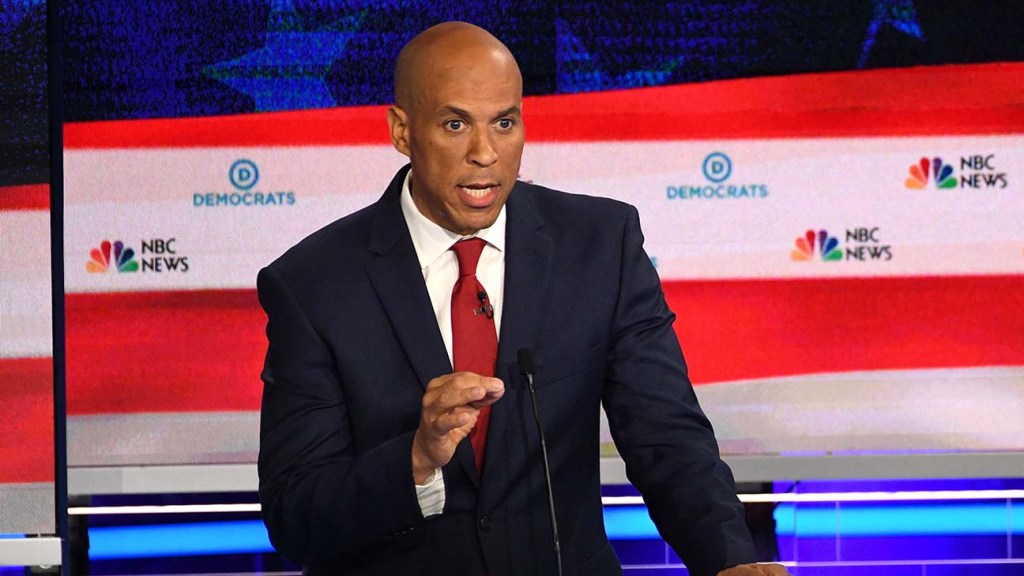 Washington Gov. Jay Inslee’s choice to wear a dark green tie seemingly united his love of his state (it’s the color of the flag and he also donned a Washington apple lapel pin) with his commitment to combatting climate change. California Congressman Eric Swalwell donned an orange tie to match the orange ribbon he wore in honor of 14-year-old Jaime Guttenberg, who was killed in the mass shooting in Florida last year and whose father was his guest at the debate — symbolizing his stance for gun control. Former Colorado Gov. John Hickenlooper expressed his political passion with a Democratic donkey-patterned tie that felt a bit overt in comparison.

Warren and de Blasio both made distinctive statements by wearing purple Wednesday night. De Blasio’s purple tie seemed to echo his bold, progressive politics. Warren showed up in her uniform of a black shell and slim cropped trousers with the pop third piece a standout purple jacket — the style mirroring the flexibility required of a candidate on the campaign trail: sleeves that can be cuffed or worn long, a stand-up collar that can be turned down from day to night.

Gabbard’s fiery red blazer, combined with her silver hair streak, seemed to signal a combination of unconventional politics, buttoned-up experience, and the relaxed aloha surfer influence of her Hawaiian roots. 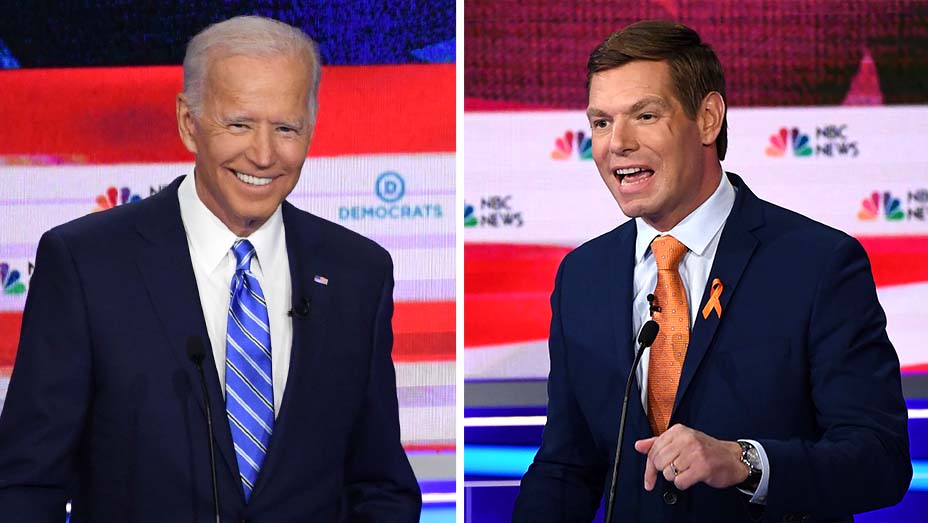 Power dressing is a deliberate process. On Thursday night, Biden exuded a dignified power with his campaign-proven look: a well-fitted suit, a white shirt, and a blue striped tie. U.S. Sen. Kamala Harris demonstrated her take-charge prosecutor style in a monochromatic black pantsuit with statement jewelry (including a trademark pearl necklace and multiple bracelets) — a look that was bold and stylish. Speaking with her hands, it was difficult to miss the accent pieces that also showed how she is unafraid to embrace her femininity.

Yet politicians are also expected to be relatable and accessible. In terms of image, there’s a familiarity that accompanies a signature style, be it Hillary Clinton’s pantsuits or President Trump’s extra-long ties. While they may not win an award for best dressed, there is somehow comfort in U.S. Sen. Amy Klobuchar’s black skirt suit blending with the dark debate stage, U.S. Rep. Beto O’Rourke’s slightly-too-wide shirt collar, Julian Castro’s extra-wide tie and U.S. Sen. Bernie Sanders’ oversize suit. These looks generate down-to-earth credibility for candidates running for the highest office in the land.

If one candidate seemed to hit all the right notes in terms of what an aspiring U.S. President should be wearing, that vote might go to Harris. And it has nothing to do with fantastic fashion. A successful outfit has the audience doing a quick head-to-toe scan and landing on the face and what is coming out of the mouth — messaging — with no distractions. Harris fit in, but her accessories made her stand out, which is perfection when it comes to the world stage.

Thank you for your support tonight. I need your help to get to the finish line. Please donate and help us get there. (Link in bio)