After Chamber CEO Todd Johnson introduced Shatilla, a discussion of luxury marketing and publicity ensued. Rosenfield shared his strategies for managing top-tier clients, including his so-called “Rule 17”: Before you learn the tricks of the trade, you have to learn the trade — and learn how to tap dance.” He employed the latter think-on-your-feet mentality on Oct. 25, when De Niro received a suspicious package following a string of explosive devices mailed to prominent Democrats including Barack Obama and Hillary Clinton.

“I get a call one morning at 5 in the morning from [De Niro’s] office,” Rosenfield said. “‘A bomb has been just been delivered to the office.’ And so I had to take out the whole day and just deal with that. He was working on a film that day, so trying to get a statement from him while he’s filming…. It goes back to Rule 17, which is learn to tap dance.” 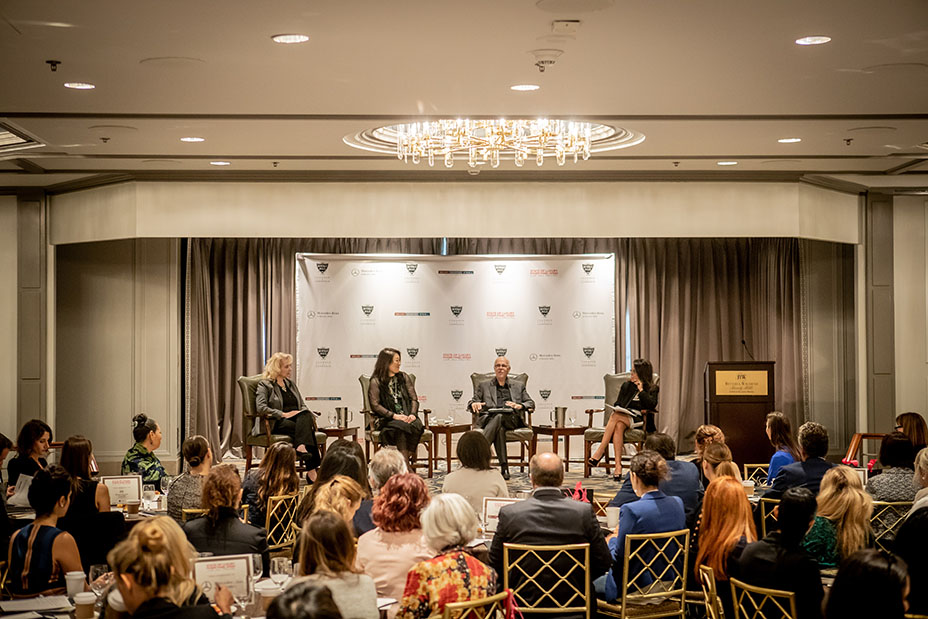 During the conversation, Shatilla cited statistics to help attendees develop marketing skills to promote their brands. She broke down the five types of luxury buyers in 2018: the “strivers,” who see luxe as evidence of success (24 percent); the “only the best,” who want top quality (23 percent); the “comfort first,” from mainly older generations (19 percent); the “aesthetes,” who care about design and appearance (17 percent); and the “trendsetters,” who want to set themselves apart (16 percent).

Duffy spoke about the trend toward online marketing amid the rise of social media, urging business owners to make websites, livestream, and think about how their product can fit in with a “smart home,” which she sees as the future of lifestyle (we’re talking lamps that change color based on your mood). She advised brands that can’t get stars to use products (Rosenfield turns down gift requests on behalf of clients to avoid giving free endorsements) to turn instead to influencer marketing: paying a YouTube star $50,000 to try beauty products, or paying 20 micro-influencers with a “highly targeted” following.

Guests also learned about how drastically different Gen Z’s buying habits are from previous generations. While Gen Z is “intentionally choosing” not to buy products with logos, Shatilla said millennials are the generation with the highest degree of brand loyalty.

“With the younger consumers — millennials and Gen Z — one of the things they connect with is messaging, so inclusion is a big thing among younger stars and younger Hollywood,” Pyun added.

Pyun, who oversees lifestyle coverage at THR, gave tips on how to cater to a Hollywood-insider audience that’s “not just actors.” To the marketers and PR pros in the audience, Pyun said, “We do need you. We need stories. We do 60 stories online before our morning meeting [and] hundreds of stories a day online.”

For his part, Rosenfield reflected on his career, saying the hardest part of the job is keeping up with technology, starting with his first computer in 1988. The easiest part of his job is dealing with clients and media. “I remember we had a client who had never been on the cover of a magazine,” he said. “And he got his first cover, and we were at a staff meeting. And I said to the account executive, ‘How are we getting him a copy of the magazine?’ And she said, ‘They’re sending it over to the studio, and [they’ll] send it to the client.’ I go, ‘No, no, you go pick up the magazine. Drive out to the studio and hand it to the client, face-to-face, eyeball-to-eyeball. This is what we did. They will never forget that.'”

Setting expectations between clients and representatives is key, Rosenfield added. He shared the story of one client who left a firm and joined Rosenfield’s solely because he wanted to be the lead guest on talk shows after ranking second to Tom Hanks on David Letterman. “That is what PR really is: it’s perception based on fact,” Rosenfield said.

When Rosenfield had to leave at 10 a.m., Shatilla joked, “Robert De Niro is calling.”

The publicist replied: “Well, actually, he is.”