Rachel Zoe returned to Sunset Tower on Tuesday night to present her spring 2018 collection after showing at the historic Hollywood hotel last season.

“Last February, I showed in L.A. for the first time and it was funny because I was like, ‘God, this is going to be weird that I’m not showing in New York,’ and it never felt so right,” Zoe said to an intimate group that included Goldie Hawn, Chrissy Teigen, Jessica Alba, Nicole Richie and Selma Blair. “I’m not saying it’s forever, but for right now, this is what’s happening.” 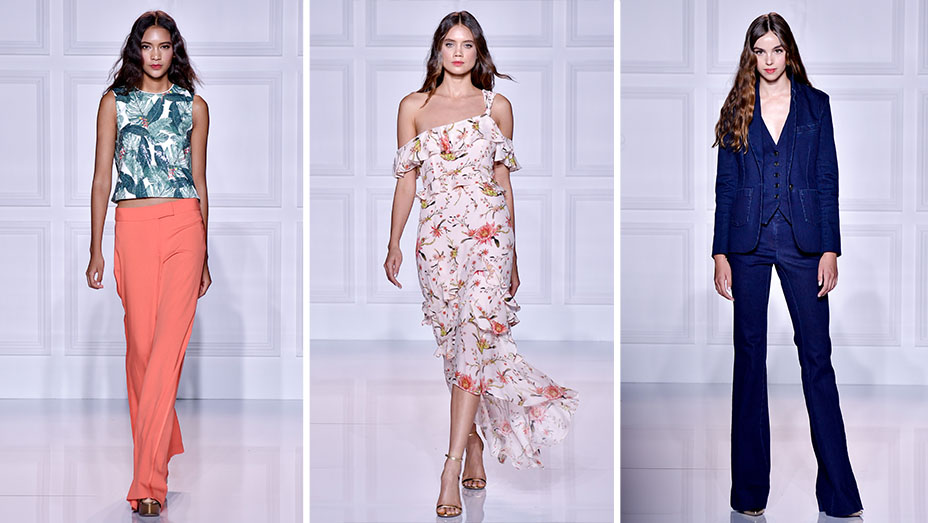 Longtime Los Angeles resident Zoe is no stranger to Hollywood, having moved to the city in 2002 “to merge the worlds of Hollywood and fashion,” she told The Hollywood Reporter in 2011. The stylist-turned-designer also starred on her hit Bravo reality series, The Rachel Zoe Project, from 2008-2013, and launched her website, The Zoe Report, in 2009.

For her latest range, Zoe drew inspiration upon the 1960s glamour of Palm Springs. She interpreted the SoCal desert with palm leaf-print dresses that were covered in sequins for that extra shine (Zoe and Teigen wore versions of that number on Tuesday) and a denim three-piece tuxedo that felt appropriate for a casually glam night in the desert resort city.

The most exciting moment came courtesy of the little white dresses (and a pantsuit) that appeared on the runway. Zoe debuted her bridal collection, which included a backless column gown, an off-the-shoulder gown with pearl-encrusted trim and single-shoulder silhouettes with ruffle details. The line, priced from $595 to $1,000, is available for preorder on shoprachelzoe.com.

“I always make white dresses in every single collection because I’m obsessed with a white dress moment and I have been for 20 years as a stylist,” Zoe told THR prior to showing her debut range. “What I found was I would constantly get these emails and photos of all these incredible women who were getting married in my dresses every season. They kept saying, ‘You should do bridal.'” And she finally did.

Rachel Zoe Wants to Dress You on Your Wedding Day